This great-looking Sears Lewiston was built in 1929, and used as a model home for Sears after it was built by Anthony P. Raffaniello, and his wife, Helena. It was offered "for inspection" for "one week only", beginning April 28, 1930.

Sears sometimes struck this deal with customers -- we've seen it before, when, for example, a wonderfully kept-up Sears Elmhurst was found in Carthage, Ohio (the Cincinnati area), and was later found advertised as a model home, in a 1930 edition of the Cincinnati Enquirer.  You can read about that house here, on Cindy Catanzaro's Sears Houses In Ohio blog. The Elmhurst was shown for two weeks, but our Lewiston, here in North Plainfield, New Jersey, was only available for one week.  I wrote a blog post last year, about a Wardway home -- the Devonshire -- that was built for a couple in Delmar, New York, and then offered "for inspection" for a short period, so it seems that this was a good deal for both the company and the buyer.  We can only imagine that the buyer must have gotten some kind of break in price by allowing their home to be used as a model home for a short period of time.

The ad ran in the Monday, April 28th edition of the Courier-News, on page 4, and advertised that "beginning today" and "for one week only", the house at North Jackson and Farragut would be available for inspection.
I lived a good bit of my childhood in Plainfield, New Jersey, and my sister, Lynne, lived for many years in North Plainfield. Though they've since moved to another town, my niece, Suzanne, is just about to move into her first home, and it's in North Plainfield, New Jersey, not too far from this Sears model home.  It is thanks to Lynne and Suzanne, in fact, that I have these excellent photos of the house on North Jackson.  They went out during this cold winter weather and snapped photos for me -- Google Street View is just atrocious for this neighborhood. Thanks, Lynne and Suzanne!

The Lewiston was offered by Sears from 1929 through 1940, and a brick, or brick and half-timber version, the Colchester, was offered in 1932 and 1933-- according to Houses by Mail. But, in actuality, the Colchester was introduced in the 1929 brick supplement catalog (see it here, on the AntiqueHome.org website), and also featured in the 1930 catalog, in a section of the catalog focusing on brick-veneer homes.

The Lewiston was featured on the cover of the 1930 catalog, and we've found it to be an immensely popular model... so much so, that there are also many "lookalikes" offered by other companies.
I like the look of the 1940 catalog listing, because it provides a little 3-D type of floor plan, that helps visualize the interior layout. Let's take a look:
The Lewiston had the kitchen, dining room, and living room, running left to right, along the front of the house, with a side entry into the kitchen, as you can see in the photo above, and the catalog floor plan, below.  There were two bedrooms in the back, separated by a bathroom, and the possibility of two more bedrooms upstairs, as an option to be done at time of build, or later on down the road. Sears offered several homes with this kind of "build-up-as-your-family-grows" kind of option.

Beginning in 1929, Sears began emphasizing the availability of several of its models with a brick veneer option. In the case of the Lewiston, the name of the brick-and-half-timber-look version was changed to The Colchester.  Andrew Mutch shows an authenticated Colchester in this blog post about Sears homes in Massapequa Park, New York.
Who Lived Here?
Thanks to a little searching on Ancestry.com, I was able to find the Plainfield, New Jersey city directory for 1930 and 1931, and, using the section of the directory where the residents are listed by street, I found that the N. Jackson Street Lewiston was owned by Anthony P. Raffaniello, and his wife, Helena.  Mr. Raffaniello was a knitter, working for a company that manufactured silk hosiery. They are listed in the 1930 and 1931 city directories at this address, and also in the 1930 census. Sadly, though, the 1940 census has them renting, on a different street, in a more modest area, and Mr. Rafaniello's "weeks worked in 1939" is listed as only "10", with his earnings at only $300.  The depression must have hit the Raffaniellos hard, and, in 1940, they also had a little four year old son, Richard. 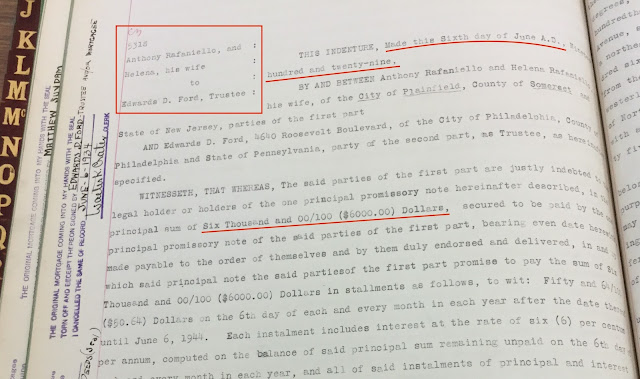 Lookalike Models
Many companies offered similar models to the Lewiston... some almost exactly the same, and others with clear differences... if you compare them to the Lewiston's window layout and floor plan. Sometimes, we can't really tell from the exterior. One thing I look for, is the side entry. Some companies have a floor plan that doesn't have the kitchen there, and the kitchen entry is in a different spot... like the back of the house. But, at least one company has almost the exact same layout as the Lewiston.  Let's look at a few examples (click any image to enlarge):


The 1937 Bennett Homes catalog (a kit-house company out of Tonawanda, New York, in upper NY state) offered two models similar to the Lewiston: The Chelmsford and the Dryden.  I only have access to the 1930, and then the 1937 catalogs for Bennett, so I don't know when they began offering these two, but they were not in the 1930 catalog:


The Standard Homes plan-book company (not a kit-home company -- they only sold blueprints) had a model called the Holbrooke. It looks to have had at least six different floor plans. I show it here, as offered in the 1946 catalog, though I'm sure that it was offered earlier, as well (if you'd like to look through other years of Standard Homes blueprint catalogs, there are several linked here, on Archive.org):


Standard Homes also offered several floor plans of a model similar to the Sears Colchester: the Burlington. As shown here, it is clearly smaller than the Lewiston/Colchester, but they had about four different floor plans, so there may well have been one that was larger:

There were no doubt other plan-book companies that offered a similar model. Feel free to let me know of any you're aware of, in the comments.

Do You Know Of a Sears House?
It's always exciting to find a Sears house, but finding one that was offered as a model home, is especially fun, since it allows us to mark the house as authenticated, when we add it to our ever-growing national database of Sears homes in the United States. If you know of a Sears house, please let me know, by leaving a comment (with email address-- the comment comes to my email, so others won't see your address), or using the "contact me" section of my blog. It's very likely that there were more Lewistons built in the greater Plainfield area.