One of our favorite houses to run across, is the Aladdin Shadow Lawn.  This is another find from our Aladdin sales list (read about that, and the Aladdin Homes company, here).  When I located it, I couldn't believe in what beautiful condition it is. Can you believe that this house was built in 1919?
Aladdin offered the Shadow Lawn from 1917-1922.  Before that, beginning, I believe, in the 1913 catalog, they offered a very similar model, called the Massachusetts. The exterior is very close, as is the first floor layout (though it had a large bump-out in the dining room, absent on the later Shadow Lawn ), but the second floor gets some changes made to the sizes and layout of the bedrooms. For one thing, the 1913-15 Massachusetts offered an oh-so-practical large Billiard Room on the second floor, larger than any of the three bedrooms, but this was done away with in the 1916 version of the Massachusetts, in favor of four similar-sized bedrooms. The two models were pretty similar in floor plan by the time that the Shadow Lawn was introduced in 1917. 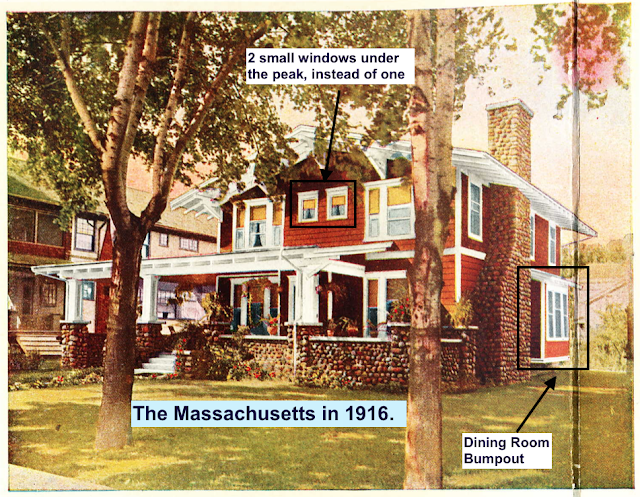 One Little Window, or Two?
Another obvious visual difference in the front, that we researchers look for, is the number of small windows on the front upper floor, just under the peak. The Shadow Lawn has just one.  Until now, we've always thought of the Massachusetts having two little windows there. And, in the catalog images for all years (1913-1916), you see two little windows on the house that is pictured in the catalog. But... NOT on the floor plan!  The floor plan for the 1913, 1914, and 1915 models shows NO little windows up in the center section of the floor plan.  So do the houses from those years have them, or not? 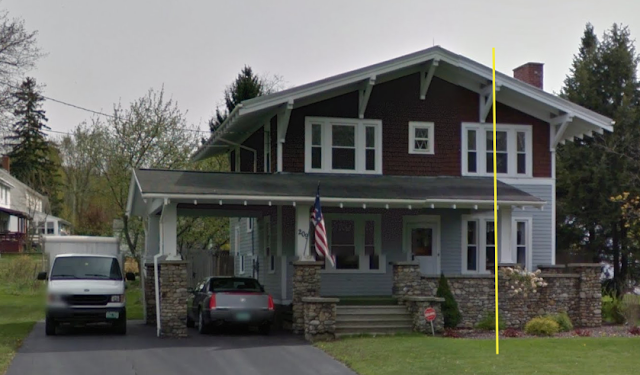 Back Windows: The Dining Room
Another window difference that we see in the floor plan, is in the dining room.  Yes, the Massachusetts, all years, has the dining room bump out, and the Shadow Lawn does not. But, the back windows of the dining room are also different, on the floor plan, along the years.  In the Massachusetts floor plan of 1913 and 1914, there are two windows, widely spaced apart. In 1915 and 1916, there are three windows there.  Once the model becomes the Shadow Lawn, there is only one, large, centered window in that spot.

And here are some closer views of the Shadow Lawn's floor plans:

A Clone By C.L. Bowes
C. L. Bowes was a publisher of house plans (not kits, just blue prints) in the 1920s. The C. L. Bowes plans were usually made available through books offered at local lumber yards, who were constantly in competition with the kit-house, mail-order house companies, for business.  Many of the C. L. Bowes plans are almost exact replicas of already-existing mail-order kit models.  Bowes offered a "clone" (as we call them), to the Aladdin Shadow Lawn. Here it is in 1923.  Notice that the upper-floor windows on the front elevation are wider, and so have noticeably less space between them, and the little small single window between them. The windows are also triples, having three same-size windows together, whereas the Aladdin Massachusetts and Shadow Lawn have a triple there, with a larger center window.  The Bowes version, and the Shadow Lawn, are both 28' wide, whereas the Massachusetts is 30 feet wide.

Another difference on the Bowes "clone", is that the center front peak is higher up than it is on the Massachusetts and the Shadow Lawn.
For comparison:
Back To Bennington
Back to the beautiful Shadow Lawn in Bennington, Vermont.  It is really in a lovely setting, with mountains far off in the distance, behind the house.
And, the house, from a different angle: 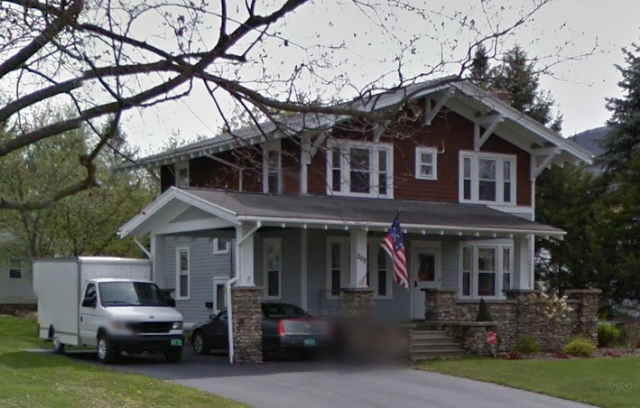 The man who ordered this beautiful home, was Earl Williams. Earl was the president of The Bennington Garage, where he sold very nice cars.

Throughout the 1920s, ads ran very frequently in the Bennington Banner newspaper, advertising the cars sold at Mr. Williams' place of business. This one appeared on March 23, 1922, page 6: 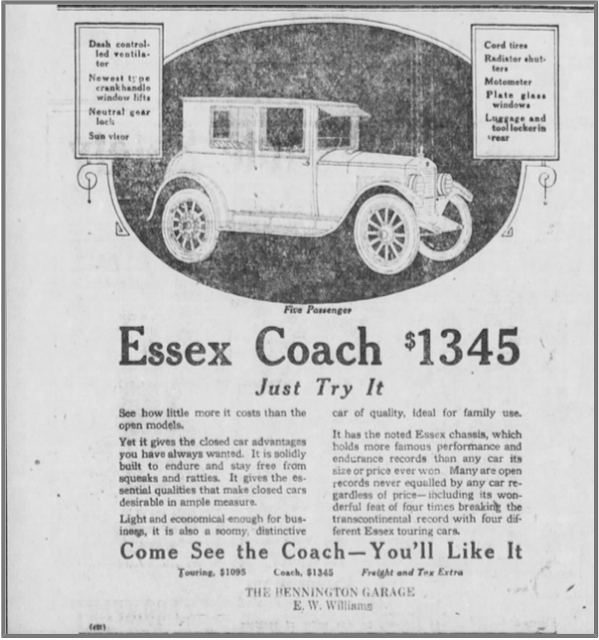