When we say, supersized, we mean it!

For some owners wanting a larger house, instead of demolition, a different approach is taken, allowing them to expand, but avoid demolishing the original house: adding on to the original structure. When we find a Sears house with an additional story, or a big addition in back, or to the side (or both!), we refer to it as a supersized Sears house. It's not an official title, of course, but it works for our purposes :)

This approach varies in success, aesthetically, in our opinion, but, we are always glad to find that a house is, at least, still physically there, often with much of the original flooring and millwork from Sears. Sometimes, we can clearly see the original house as part of the new design. Sometimes, the only way that we can know that there is a Sears house buried in the newer structure, is from our primary-source research (in Arlington County, that usually means an original Trust Deed/Mortgage through Sears), that led us to that lot. If we can still see windows and doors and bump outs in the original spots, and the county still gives the build year as the original 1920s-era build year, we know that the original Sears house is still there. During my mortgage research in Arlington County, I found over 20 of these supersized Sears houses still standing, so today's blog post will show you a few of those.

Sears Hamilton at 3918 8th Street South: This is the house shown at the top of my post today. It was originally a one-story bungalow, as you can see from the catalog image taken from the 1926 Sears Modern Homes catalog. The original owners of this house, were Ernest C. Wark and his wife, Ethelyn Webster Wark, who ordered the house from Sears in 1926, taking out a $4,800 mortgage. The basic cost of the Hamilton kit was $2,124 in 1926, so the additional mortgage amount would have included the small extra costs for plumbing, heating, wiring, and electric fixtures (there were a few options for these, so they weren't included in the base package price), as well as construction costs (which could have been arranged through Sears, or through the owners' choice of a local construction team). We're not sure at what point this house was supersized, but sales records show that it was sold in 2003 for $500,000, and then in 2010 for $890,000. The next sale was in 2019, for $925, 000, so I imagine that the addition was added between 2003 and 2010. I had assumed that it was now a 2-family structure, but, no! It's just a double-sized single-family home, based on the original Sears Hamilton layout.. You can see some really nice interior photos of both levels, in this Redfin Sales listing, or this Compass listing.

In my opinion, the supersizing was very nicely done -- and the two members of our research group who live in Hamilton bungalows, agree, I think. I can't even tell for certain which level was the original, and the floors on both levels are really beautiful, as is the trim (some of it is probably original, and other trim was fabricated to match, which is really nice attention to detail). The distinctive brickwork design of the chimney, there on the right side, matches what we usually see on the Hamilton, and what we see on the catalog image, so maybe the first floor is the original floor? In any case, here are just a few photos from the real estate listing: 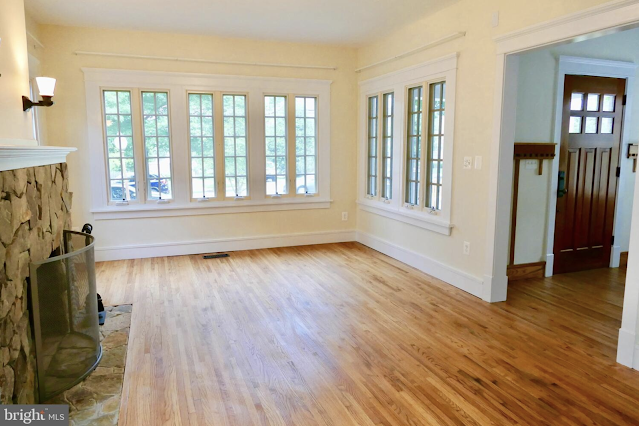 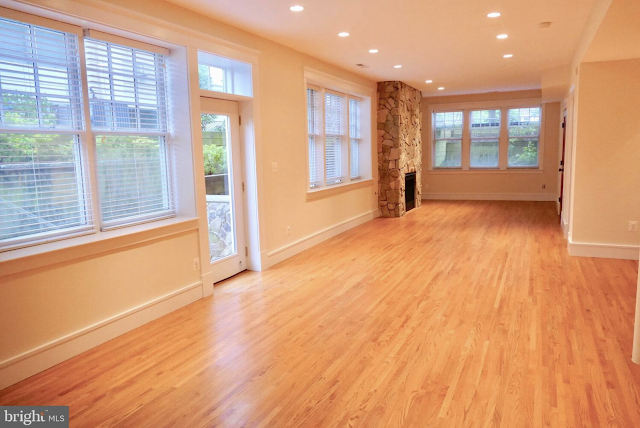 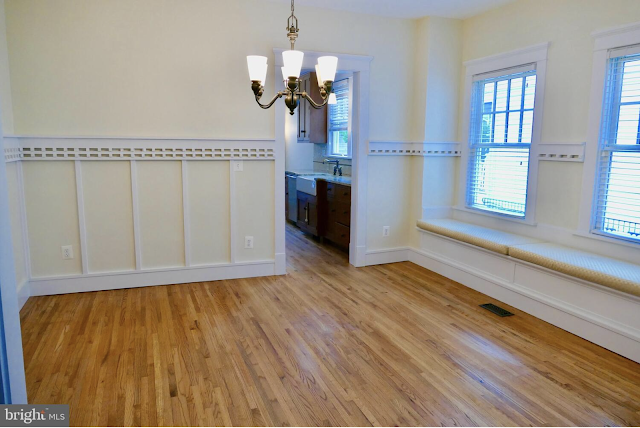 If anyone out there has any information on when the house was enlarged, and which floor is the original house (and, if we're really luck, has a photo!), please feel free to contact me (SearsHouses@gmail.com).
Four Supersized Sears Crescent Models
We found seven examples of the Sears Crescent, still standing. Of those, four have been supersized to varying degrees. Let's take a look, first, at the image of the Crescent in the 1925 Sears Modern Homes catalog:
901 19th Street South: Our first Crescent example, was bought in 1927, by James Lawrence Endicott and his wife, Mary Elizabeth, with a $5,000 mortgage through Sears. It's a pretty straightforward enlargement, that works pretty well. There's a Sears Rodessa next door, built in 1922.
1712 N Wayne Street: This next Crescent was also bought in 1927, with a $4,800 mortgage through Sears. The mortgagors were John E Merritt and his wife, Sarah J. Merritt. Unfortunately, they lost it back to Sears the very next year.
Here's a straight-on front view:
1885 N Highland Street: This Crescent was bought in 1925, by widow Ida Andre, with a $4,600 mortgage through Sears. It would have been hidden from us, if it hadn't been for historic Google Maps Streetview's earlier versions-- because, in 2021 Streetview, the house is fully hidden behind foliage . I had to slide around the corner, to Lee Hwy, and go back to 2012 Streetview, to catch a glimpse of the house, but, still, because of the demolition of the house near it, and the construction of a high-rise building in its place, there's not one great view... however, what we do see is amazing. Take a look at how this 1925 Crescent has been transformed:

2271 N. Upton Street: Our final supersized Crescent, has had quite a transformation, with an addition to the right side, a complete re-looking of the trademark Sears Crescent front porch, and an addition to the back that also incorporated the addition of extra height to the house. The interior looks to have been completely gutted down to the joists, with walls removed to make an extremely open floor plan, and the staircase re-located. Something of the original house is still there, but I'm not sure what.  This Crescent was originally bought in 1925, with a $4,600 mortgage through Sears, by J. Dwight Sill and his wife, Olga.

In 2009 Streetview, only some changes had been made... new siding, and enclosure of the porch pillars and the arch of the porch roof:

Here's the left side, which shows us that this was the larger of the two floor plans that was offered in 1925, and it was the reverse of the layout shown in the catalog (a common change). The larger plan had a small amount of extension to the back of the house, but that extension was only on the first floor, and the main roof was not over that section... it had its own roof:

Here is the final look of the house, after all of the transformations put in place after 2009... this is the current look, in 2022, from a 2021 real estate listing: 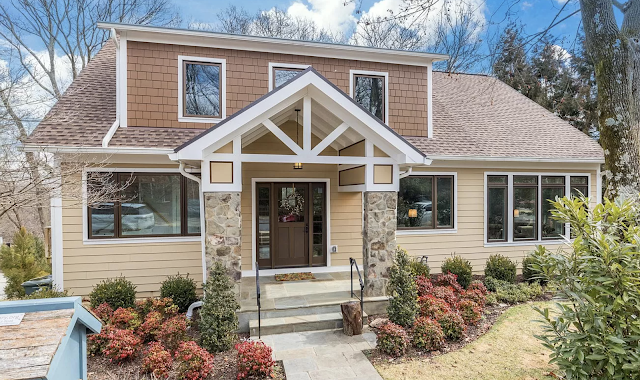 Here is the left side, next to the original left side:

Here is the new layout, as shown in the real estate listing, with the Crescent's catalog floor plan below. You can see that the staircase is now all the way over to the left side of the house, while it had been right in the middle of the house, originally. All of that area was completely opened up, so the staircase was re-located: 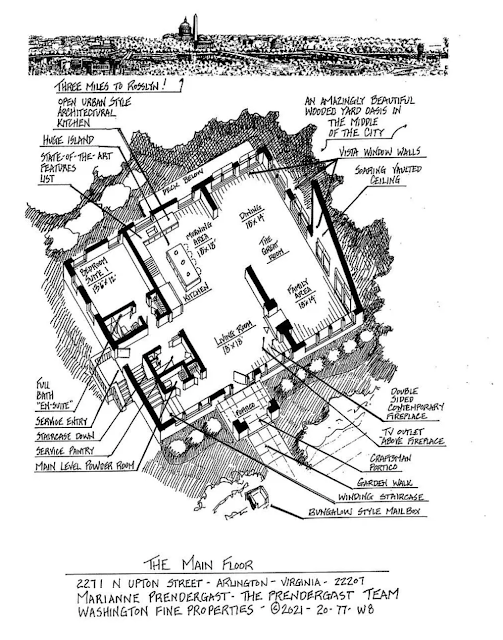 Here are some images of the interior, now:


This house sold in 2015 for $825,000. I imagine that all of the renovations were done after that, and the house was listed again, in July 2020, for $1,725,000. After several months on the market, it was removed, and was then re-listed in February 2021. It sold in March 2021 for $1,500,000.
Three Supersized Sears Clyde Models
I'll close with three of the remaining Clyde models that we found still standing in Arlington County. We know that there were at least three more, that, instead of being supersized, were simply demolished. The Clyde bungalow was a popular small model offered by Sears -- we've got over 130 of them on our national database. In Arlington, though, this is one of the models that seems to have been frequently chosen to be torn down. So much so, that I once commented, "It's not safe to be a Clyde in Arlington, Virginia!" We have 21 "unknown" models that were demolished, too (meaning that we know that there was a Sears house on a particular lot, but it is now either a new build, or a commercial build location, so we can't know what model was there, originally), so it's possible that some of those were Clydes, as well.
The Clyde bungalow was offered between 1920 and 1929. There was a little bit of a design change in the last five years, visible in the look of the chimney, and the streamlined look of the front porch, and the removal of the decorative elements on the gables :
Here's the information section and floor plan of the Clyde, in the 1926 catalog: 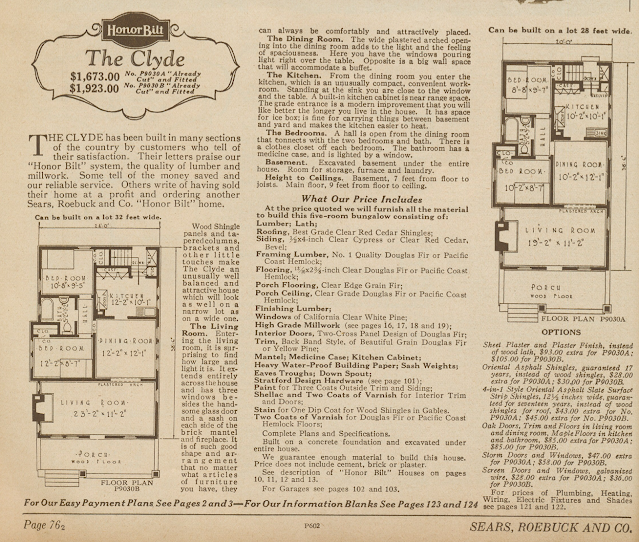 Sears Clyde at 709 N Edgewood Street
This one is a really big house, now. Take a look, and see if you see the front of a Clyde in this house. I had noticed this house on the street, as I "drove" up and down the street during searches for mortgaged lots, and then finally found that I actually had a mortgage for the house. What's interesting is that this house, though purchased in August 1927, when the Clyde was offered with the look you see in the 1928 example, above, was given elements more like what you see in the pre-1925 version of the house, when it was given its re-looking. 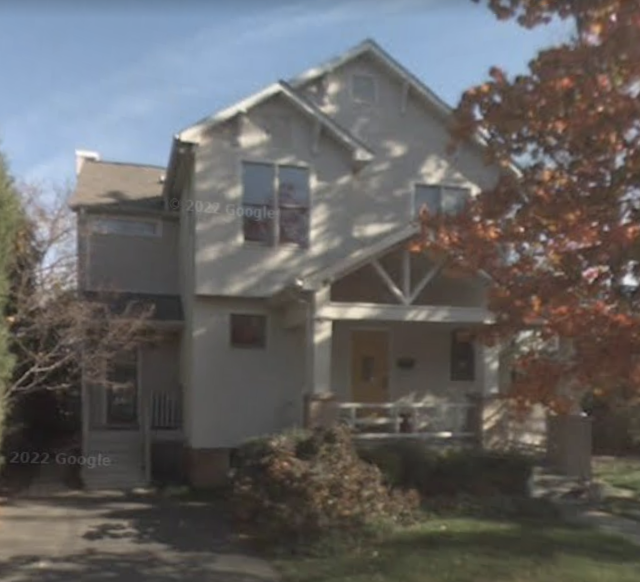 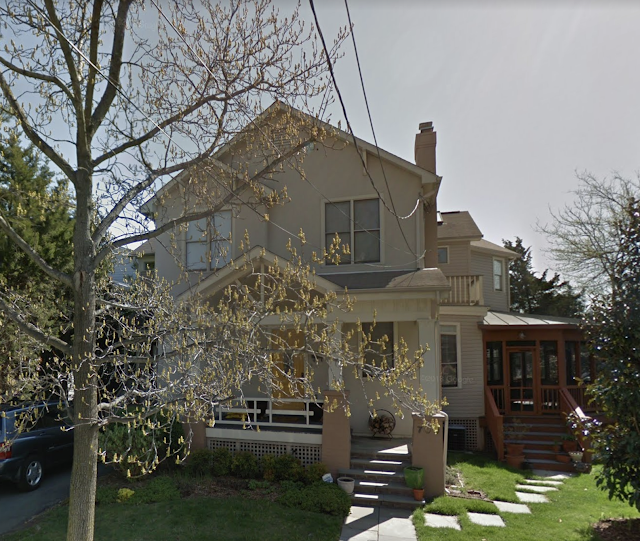 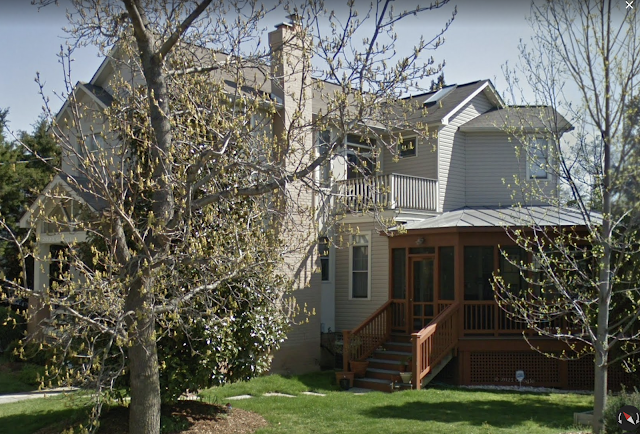 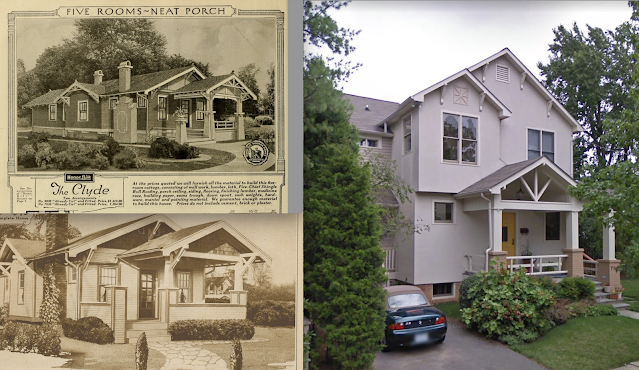 This Clyde was purchased in August of 1927 with a $3900 mortgage, for bachelor James E Mackley, who was a clerk for the U.S. Government. He later married Virginia, also a clerk for the U.S. Government.
Sears Clyde bungalow at 409 S Barton Street
This Clyde has a big addition, but it is more keeping with the style of the original house. It was bought in February 1926, with a $3900 mortgage through Sears, by Lawrence Clyde Heishman and wife Mabel Helen Heishman. Lawrence was an electrician for the U. S. Government. Interestingly, this 1926 Clyde has the boxy porch piers of the later look of the Clyde, but it actually has the porch columns and soffit of the earlier style.
Sears Clyde bungalow at 12 E Alexandria Avenue, Alexandria, Virginia
Here is the greatly expanded, silvery grey Clyde that we found in Alexandria, Virginia (I should point out, again, that though Alexandria is now its own entity, its historic land records are found through accessing the Arlington County government website). It's hard to get a feel for the whole house, and it took me a minute or two to figure out which Sears model this was, when I pinpointed this lot as the one with a mortgage. The house was bought in September of 1927 by Claude H Wolford and wife Evelyn Wolford, with a $4200 mortgage.