With apologies to Cliff Burwell and Mitchell Parish, I present to you, a sweet Lorain, the model offered by Sears, not the song so sweetly sung by Nat King Cole. The song, My Sweet Lorraine, was published in 1928, and followed, the next year, by this cute little model by Sears, first seen in the Sears Modern Homes catalogs, in 1929. It made its last appearance in the final catalog, in 1940, and that's the image that you see here, to the right.

The Sears Lorain is a compact little house, and this one in Landisville, Pennsylvania, is in beautiful, almost-original condition (updated kitchen), with natural-wood Craftsman style trim, and beautiful, natural hardwood floors. Let's take a look at what the real estate listing has to show us, along with some info from the catalogs. 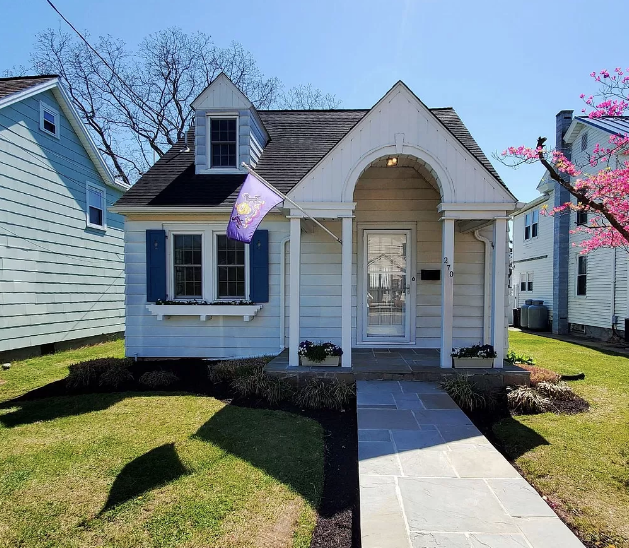 That first year, the catalog included a list of what was offered, standard, with the Lorain, and what optional upgrades you could make. 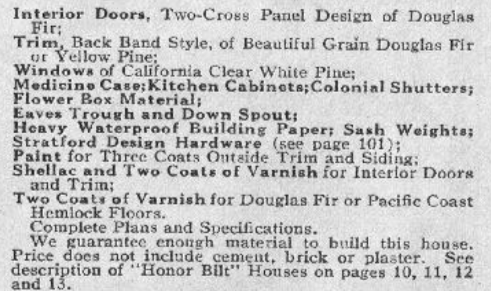 You'll notice, in the second image, above, that the trim (for windows and doors) is referred to as "Back Band Style". Here is that style Craftsman trim, in the catalog:
And, that's exactly the style that you see, around windows and doors in this Lorain in Landisville, Pennsylvania: 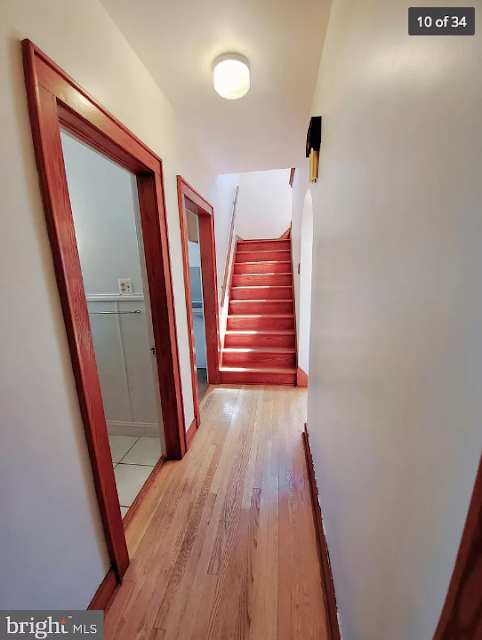 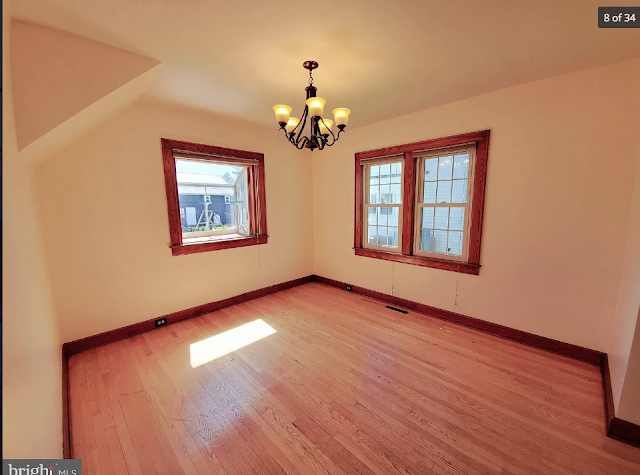 This house is said to have been built in 1939. Pennsylvania's assessor build dates are often wrong, but when the date does not end in 0 or 5 (1900, 1920, 1925, for example, are the usual dates we see, for this era), we have more reason to believe that the build year is accurate, in Pennsylvania. Also, the folks who are listing this house, know that it's a Sears Lorain, and, in this case, it may be that the house has been in the family since it was built, and that they know when their grandparents (perhaps!) built it. Who knows... but, it was still offered in 1939, so it could be accurate.

Here is the floorplan, as shown in the 1940 catalog:
That year's catalog showed the floorplans with this cool sort of 3-D style, helping you visualize the plan. But, in 1929, the plans were shown like this: 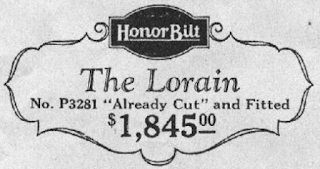 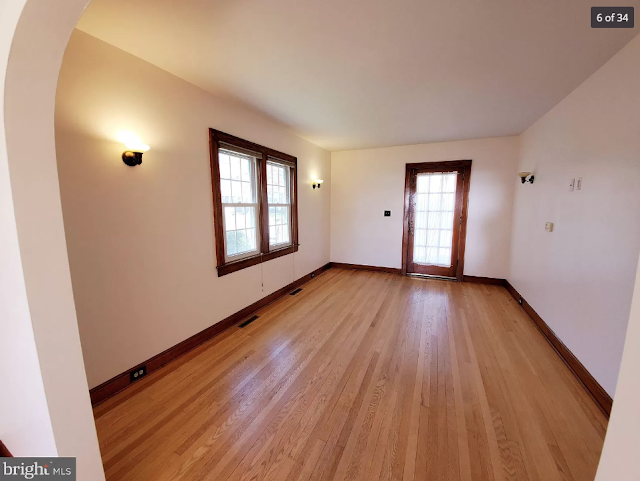 The downstairs and upstairs bedrooms have the same window and door trim, and we see an interior door style that was shown in the catalogs for years:


Although the 1929 catalog says that Sears Stratford design door handle hardware came standard, this house does not look to have that. There are no real close up photos of the door handle hardware, but the design looks pretty rectangular, though slimmer than the Chicago or Shefton designs that Sears offered for many years (and other companies offered similar designs). I think that it may be the Elgin brand Tomorrow door handle design, with its art deco styling, that we see in the 1930 building supplies catalog:
To get upstairs, the Lorain had a nice staircase and railing, even though the upstairs was only a half floor. Here is a good view of the upstairs hallway and landing and staircase, with its chunky craftsman staircase newel.

Did you happen to notice the nice blue shutters on the front of the house? They have a small urn shape cut-out, and that was one of the designs that Sears offered. 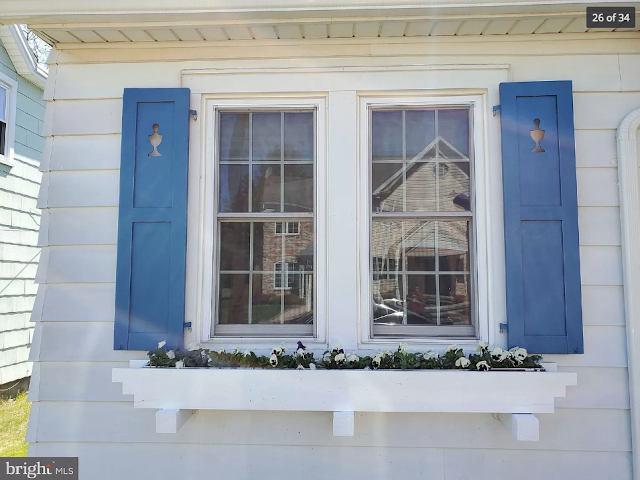 That's it for our sweet, sweet Lorain... by Sears. Let's finish off with a little of "My Sweet Lorraine", sung by Nat King Cole, with Oscar Peterson on piano, Ray Brown on bass, Herb Ellis on guitar, and Coleman Hawkings on sax:
Ahhh, but here's a realllllly smooth, remasterd version... just wonderful! This is the one that I used to hear my sweet dad singing, walking around the house :)

Ha! I bet you thought this was a Gordon-Van Tine Stratford model... or a Gordon-Van Tine Cabot model, or maybe a Wardway Mount Vernon model... or, if you're new to Sears kit house hunting, you might even think it's a Sears Crescent model! Because, in the end, these models are all so similar, at first glance, that it makes identifying this style house lots of fun.

If you're a seasoned kit house devotee, you're laughing, and thinking, "duuuh, it's obviously none of those! Just look at those windows!" or "Of course it's not a Crescent, that porch roof is all wrong for a Crescent!" But, when we're new at this, once we've seen that Sears Crescent, we remember it, and that pointy roof over the front porch, and the general look of this style, and we think we see it in lots of houses... until we put an image of the Crescent right next to whatever house we're looking at. That's partly why I put together this early blog post of mine, after I found my first Sears Crescent, because I needed to analyze, and put into one place, all of the models we were aware of, with similar lines to the Sears Crescent.

The first thing to look at, is the shape and style of that pointy porch roof. Here's an image I made, comparing that part on some models, that I put in an earlier blog post (one of the ones I linked to, above): 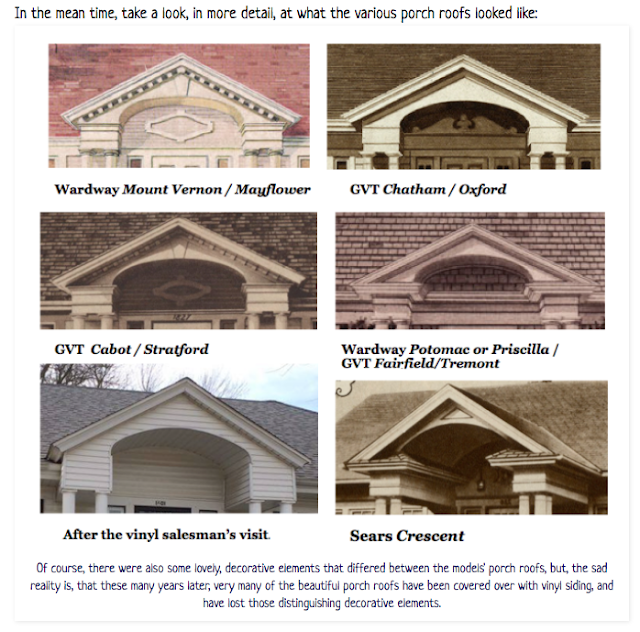 But, another issue, right off the bat, is the number of windows on either side of the front door. This house has three equally-sized windows on each side. Those Gordon-Van Tine and Wardway models that I mentioned, above, all have only two (equally sized, but wider than these) on each side. 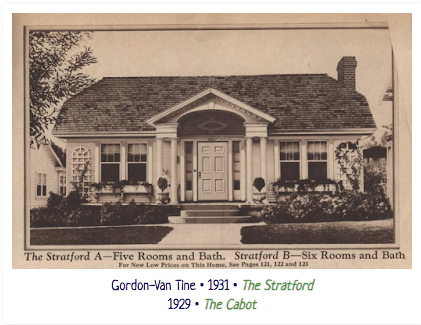 Wardway and Gordon-Van Tine also each had smaller models than this, that had only one, single (larger) window on either side of the front door:
But, we also need to look at what kind of roof the house has... clipped side gables (like the Priscilla, above), or pointed side gables, like the Sears Crescent? Then, there's the chimney... is there a chimney for a fireplace? Where is the furnace vent chimney? And, what about the front door... does it have sidelites (like the Crescent and the Mount Vernon and the Cabot/Stratford ) on each side of it, or none at all, like the Priscilla's more simple door frame?

Once you've narrowed all of that down, you really have to look at the side windows... how many are there? How are they grouped? But, wait... some of these models had two (or more!) floorplans! So, then, you have to compare the footprint AND the side windows (often, the larger of the two floorplans has an additional section on the back of one side of the house).

And, don't forget, the vast majority of homes built in the kit-home era, were actually not kit houses... they were made by ordering a plan from your lumber company, or contractor, from a book he would have had, and your builder just ordered standard-length lumber, and supplies, from the lumber supplier, and built the house the regular way. That plan book company might have been the Standard Homes company, or the Home Builders company, or might have been a collection published by C. L. Bowes, offering something like this 1925 model:
So, you can't even say (at all!) that you have a kit house in front of you.

But... this one is a kit house, I'm pretty darn sure. And, after looking at all of those issues, and comparing against all of the plan book and kit house models that I'm aware of, I realized that... BINGO!... we have mostly likely got a Bennett Homes Garwood model here, on 2nd St, in Eden, New York.

One other helpful point here, that led me to consider Bennett, is that Bennett was based out of North Tonawanda, in upper New York state, not far from Buffalo. And that's the general location of Eden, New York: 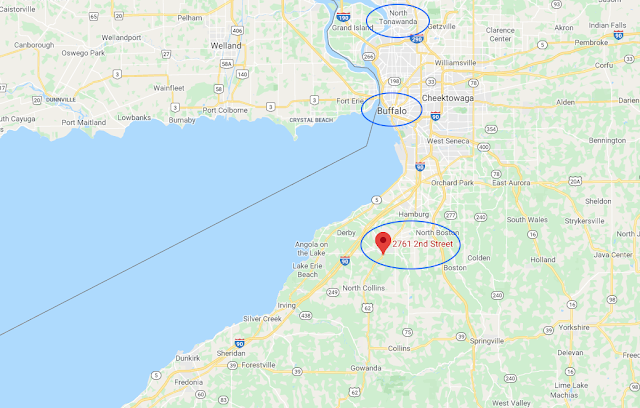 And, here's that area of the country, along Lake Erie, seen from further out, on Google Maps:
Now, usually, when it comes to Bennett Homes (Ray H. Bennett Lumber Company), we leave it to our Bennett expert, researcher Sarah Mullane. Sarah lives up in that area, and has a blog called, Catalog Homes Of Western New York. But, Sarah is busy working from home right now, and offered to let me blog about this one... you should check out her blog. Here's a post she did about the difference between The City Of Tonawanda and the town of North Tonawanda, and this last post that she wrote, is the last in a several-part set about some really fabulous Sears houses in Dunkirk, New York.

The Garwood At 2761 2nd Street, Eden, New York
Everything really falls into place when you compare photos of the 2nd Street house, against the floorplan of Bennett's Garwood model. Luckily, for us, we found this house through a real estate listing, so we have lots of interior, and exterior, views. What's funny (and so typical, really), is that this house thinks its a Sears house:
You can't blame them, really. Had you heard of Bennett Homes? Neither had we! Until we started learning about kit houses. Mostly, people, if they've heard about kit houses, have only heard of Sears kit houses, because of Sears being a major brand of stores and catalogs for every last thing, over its many, many decades in business. Nobody knows anything... until they do, right? Everyone has to start out somewhere. So, if the folks with this house, found some stamped lumber, or heard from previous owners that the house was a kit, they would, naturally, have thought that meant that it was from Sears. Sometimes, families grow up in a kit house their whole lives, thinking it was from Sears (because all Daddy said was, "we bought our house from a catalog, son"), and never understand why they can't find the model in any of the Sears Modern Homes catalogs. That was the case with the Aladdin Homes Adams model, in Torrington, Connecticut, that I start off this blog post with. So, it's natural that they don't realize that they have a home from the Ray H. Bennett Lumber Company. But, I'm pretty sure that they do. So, let's take a closer look.

Front view from right side: 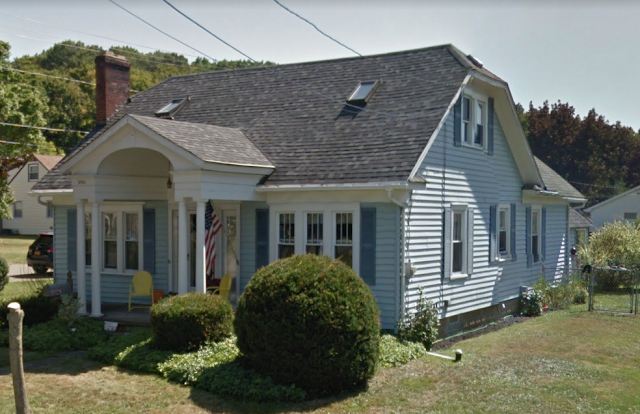 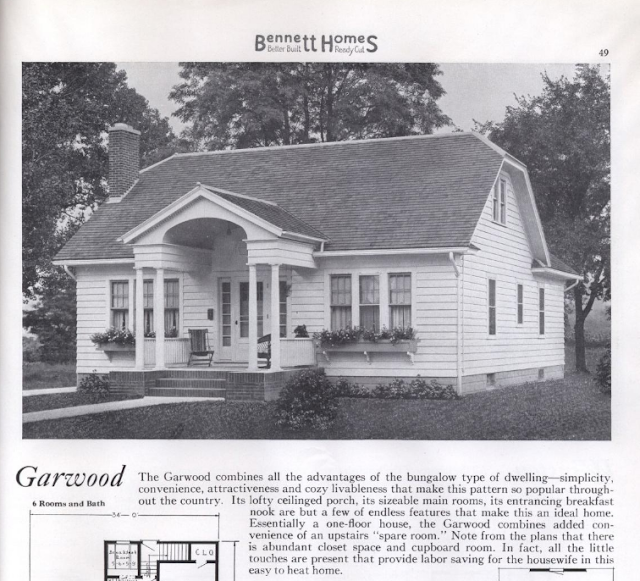 Here is the floor plan... and, then I'll post some interior photos, and let you follow along against the plan... or, just enjoy the photos :) 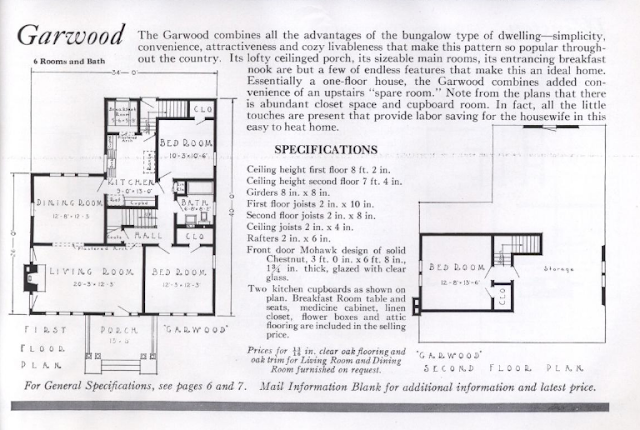 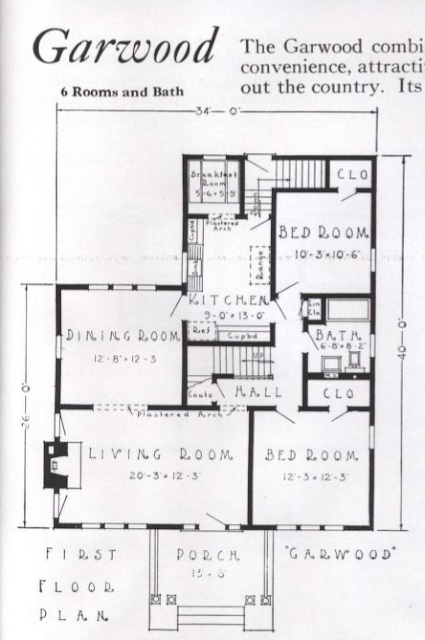 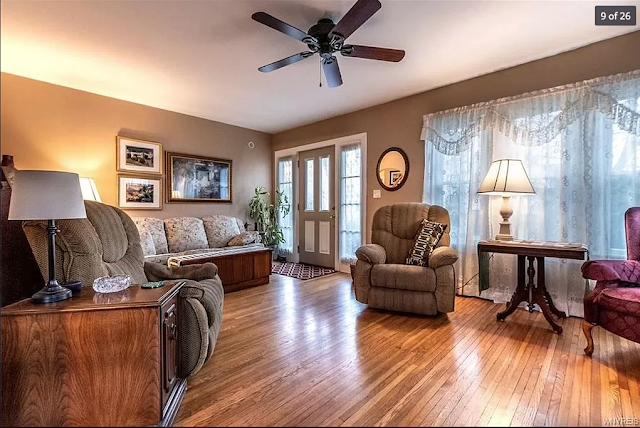 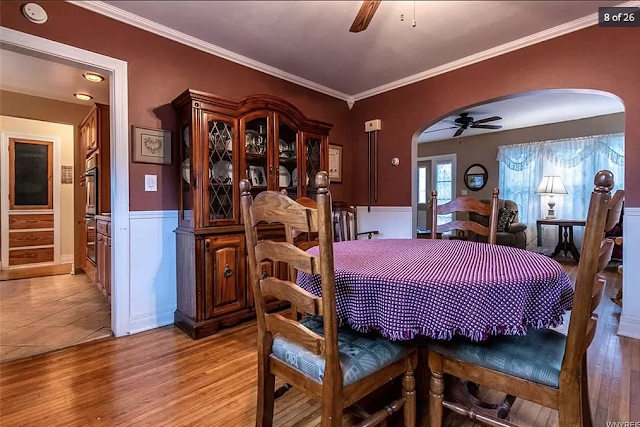 Staircase, in the center of the house, with the door to the closet, on the left, and, to the right, you see what would normally be the back bedroom of the first floor... looks to have had it's wall opened up to open up the kitchen area (and it's no longer used as a bedroom):
Here's that interior , 2-panel door, in the 1925 Bennett building supplies catalog... same kind is used all around the house, for the interior doors:

Here's the remaining first-floor bedroom... I just love this! Cross ventilation, a bank of triple windows up front, with two single windows on the side wall... all with beautiful Craftsman style trim. 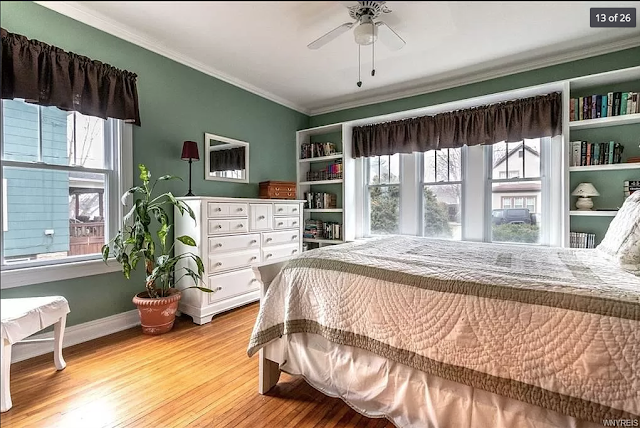 One interesing issue here, is the door handle hardware that we see on that closet door... and on other interior doors in the house. It actually looks like what Sears offered, as the Old Towne door handle hardware. But, that was an Elgin brand offering, so it must not have been unique to Sears.
Here's an upstairs bedroom: 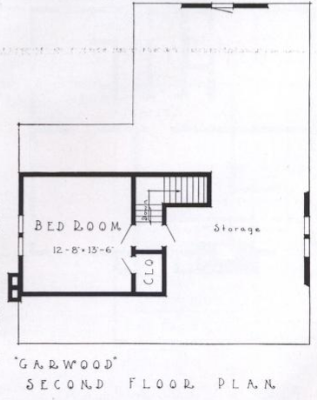 Besides the links to Bennett Homes catalogs on Daily Bungalow, here are some (from about 1920-1938) on Archive.org, which you can get to via this link: 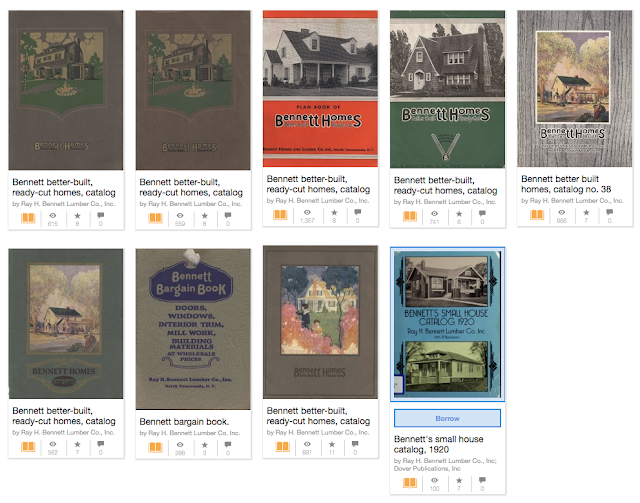 Posted by SearsHouseSeeker at Saturday, April 18, 2020 No comments: