Back in June (2016), Atlas Obscura did a nice little article in the blog section of their website, about Sears homes.  Writer Cara Giaimo contacted our Sears Modern Homes Facebook page, asking for interviews, and we happily obliged. The blog post especially featured our researcher friends Andrew and Wendy Mutch (Kit House Hunters), and my blog was mentioned, too. Then, just recently, on the Atlas Obscura Facebook page, they re-ran that article, and there was, again, a great response. So many folks commented to share their stories of Sears homes that they are aware of.

Of course, the term Sears House has (erroneously) become synonymous with mail-order-kit-house, because most folks (who aren't as fanatical about them interested in them, as I, and my researcher friends, are) don't know that there were a number of major companies offering order-from-a-catalog-get-a-whole-kit-of-the-building-supplies houses.  Gordon-Van Tine was one of those companies. And, thanks to a comment from Jeff Miller, of Dansville, New York, we have this beautiful Gordon-Van Tine model No. 140 home to show you.
Somewhere along the way, Jeff had been told that his house was a kit house made by Montgomery Ward.  That's an easy mistake, because Montgomery Ward homes were actually made by the lumber company/mail-order-house company, Gordon-Van Tine. As a result,  both companies marketed many of the exact same homes, under different names.  But, we know that Jeff Miller's house in Dansville, New York, is a GVT (short-hand we use to refer to the Gordon-Van Tine company) model, because he has BLUEPRINTS! Yes, I wrote that in all caps, because, yes, I am REALLY excited to see blueprints for one of our mail-order houses :)
I did a little research, looking through some Gordon-Van Tine catalogs, and found several similar houses to Jeff's.  However, his blueprints had "G.V.T. PLAN No. 14..." written on them (cut off at the 4), so it was clear that the model number must be a 140 or a 142 or something like that. 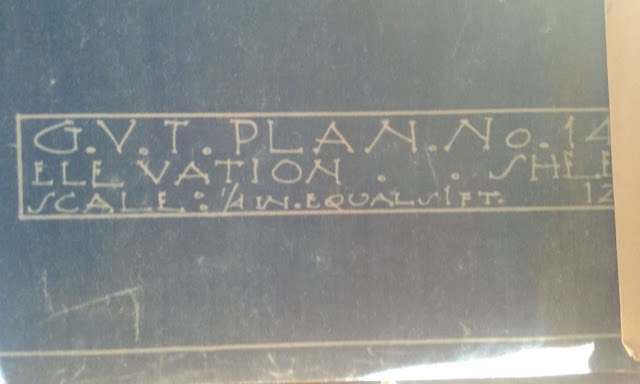 I quickly found that the GVT catalogs after the Standard Homes 1916 catalog, all had model numbers higher than the 140s (for example, the GVT 1916 Ready-Cut homes catalog, mostly had model numbers in the 500s), so I was able to narrow my search to that year's catalog, which had numbers in the 100s and 300s.
I have scanned versions of many of the Gordon-Van Tine catalogs, but, thanks to Archive.org, you can see quite a few of them online. Daily Bungalow's Flickr albums also serve as a wonderful resource of GVT, Sears, Montgomery Ward, and other house catalogs, as does their Antique Home website.  If you would like to peruse the numerous house catalogs available online, I have a list of them, categorized by company, and by catalog year, on this blog post of mine (the link is also always available in the links on the right side of my blog).

Jeff shared several personal photos of his house with me, including some shots of the blueprints, so let's take a look (please remember to cite this blog post, and Jeff Miller, and link here as your source, if you share any of these photos). I'll post some catalog pages, too (click on any image, to enlarge): 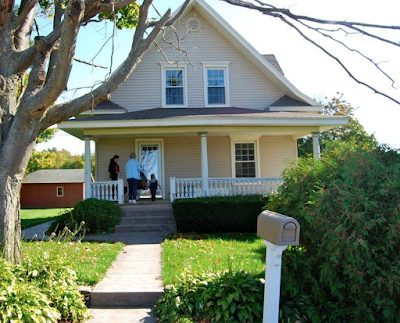 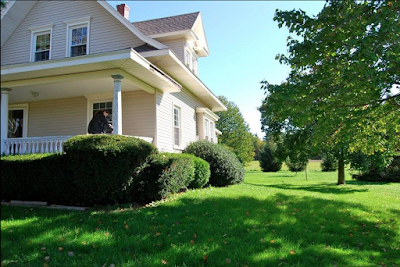 Let's see if we can get a closer view of each of the floor plans on the blue prints:
Here is a view of the entry hall and staircase, from the living room (indicated in yellow on the blue print below): 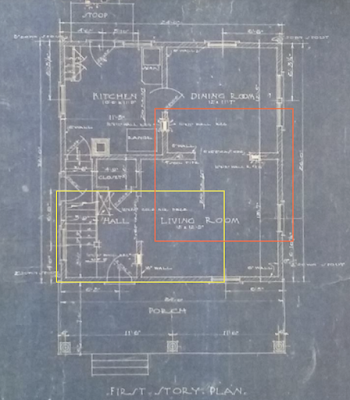 Even though we know for certain that this house is a Gordon-Van Tine company house, it's fun to match interior woodwork to the offerings in the catalog. For example, here is the staircase, matched to a newel and baluster offered by GVT in their 1918 building supplies catalog:
And, here is the living room, looking into the dining room (indicated in orange on the blue print above): 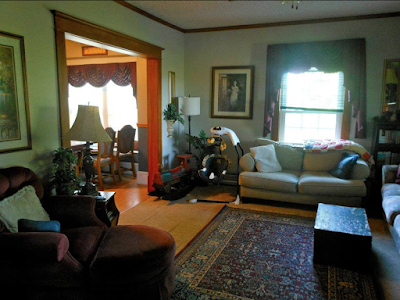 Second floor:
And, cellar:
Here are a few pages from that catalog, showing the details of what was offered when you bought your Standard Home from Gordon-Van Tine:


I did have clarification from Jeff Miller that they do not know the year that the house was built (see conversation snippet, below). He told me that he could never find that information on the abstract for the house, nor in any paperwork related to the house, and it wasn't on the blueprints.  The county records say "1900", but when county assessor records say that for a house, it's almost always a guesstimate, given when there are no records on file for the exact year of build, but the guess is that it was in the very early 1900s. At least, that's what we've found time and again. I gave a "circa 1916" build year for the house, because I found the model in the 1916 catalog, and not in later years, so we know that it was not later than that.  But... was it before that?
If you follow my census research, below, you'll see that I have found that the house was almost definitely not yet built in 1915. Let me explain.

Jeff did tell me that he understands the land to have been in the name of the family whose farm gave name to the road: Shafer. And, that town lore says that it was maybe built as a wedding gift for the Shafer family's daughter.  Armed with that information, I did some searching on Ancestry.com.

What I found, was that the farm was owned by James Shafer, and his wife Rose.  I found that they had two children, a son, Carl, and a daughter, Eva (though she is listed as Allie in the 1900 census).  I learned from the 1929 obituary for Rose Shafer, that her daughter's married name was Eva L. Traxler, whose husband was Leonard G. Traxler.
Jeff Miller had also told me that the house next door to his No. 140, was the original Shafer family farm house. And... the 1920 census puts James and Rose Shafer living next door to (their daughter) Eva and Leonard Traxler. The census doesn't give street addresses, or even a street name, just that they live on a farm. So, I would say that the original family to live in Jeff Miller's Gordon-Van Tine No. 140, was Eva L. Shafer Traxler, her husband, Leonard Guy Traxler, and their little girl, Lena!

But, in terms of build year, here's what is interesting: The 1910 U. S. census shows Eva and Leonard Traxler already married-- probably newly married, since she was only 20 that year, and their daughter wasn't yet born. And, they are shown living on some street that does not show the Shafers next door... so, the No. 140 was not built as a wedding gift... at least, not at the time of their marriage.
The 1915 New York census shows both the Shafer family (James and Rose), and the young Traxler family, living NOT on the farm on Shafer Road, but on Stong Road, which is a little bit away from Shafer Road. So, it's possible that the Shafers did not move to a home on the family farmland property on Shafer road before 1915, AND the GVT No. 140, was apparently not built until after 1915, on that family land on Shafer Road.  I think that's pretty good, documented proof that the Miller's GVT No. 140 house was not built before 1915.


And, here is Shafer Road, showing where it is situated in relation to Stong Hill Road: 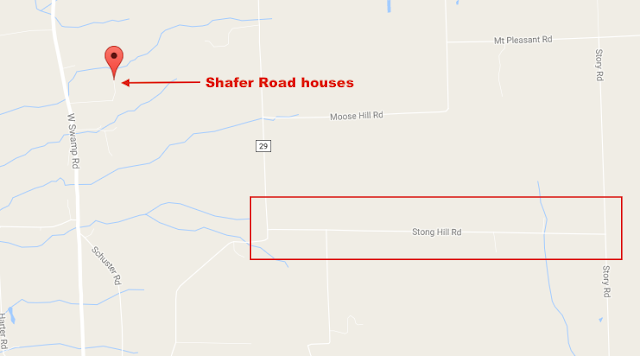 The Traxlers are buried in Greenmount Cemetary, in Dansville. 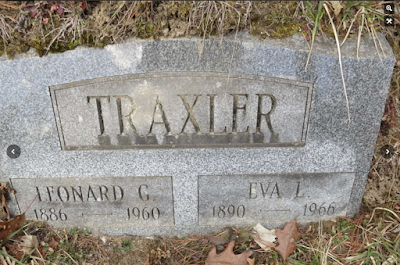 Gordon Van-Tine also offered a catalog in 1916 of Ready-Cut homes. These were models that you could buy as pre-cut kits (most were also offered as Standard homes, not ready-cut, at a lower price), and 1916 was the first year that GVT offered this service. In the Ready-Cut 1916 catalog, GVT offered a model that is almost exactly the same as the No. 140, but with a reverse floor plan, and a few other minor changes (closet placement, vent chimney placement, etc.).


Here is how the floor plans compared:
GVT No. 547 • 1927
In the 1927 GVT Ready-Cut catalog, there was offered the very similar (at first glance) model No. 547... but, there are definite differences from the No. 140 and No. 519:
(Note that Wardway Homes offered the Jerome model in their 1924 catalog -- a match for the GVT No. 547. GVT manufactured the kits sold by Montgomery Ward under the Wardway Homes name, so both companies offered mostly the same models, but with different names.)
GVT No. 501 • 1916 Ready-Cut
The Ready-Cut 1916 catalog also offered the No. 501. It is more similar to the later No. 547, and, from the exterior, the only obvious difference is the size of the third dormer-side window (for the kitchen):
Here is a comparison of the 1916 Ready-Cut No. 501's first floor, against the 1927 No. 547's first floor plan. The differences are mainly the addition of a closet for the 1st-floor bedroom (in 1927), and the slight change in placement of the entry into the kitchen, from the pantry: 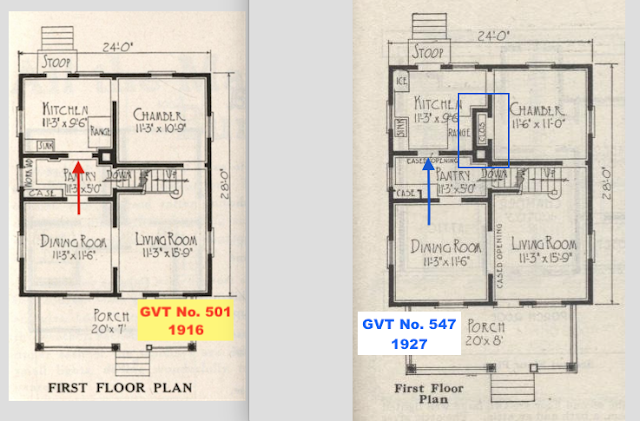 The second-floor plan of both the 501 and the 547 is almost identical, with closets indicated or shown, and the size of the bedrooms differing by three inches, for some reason: 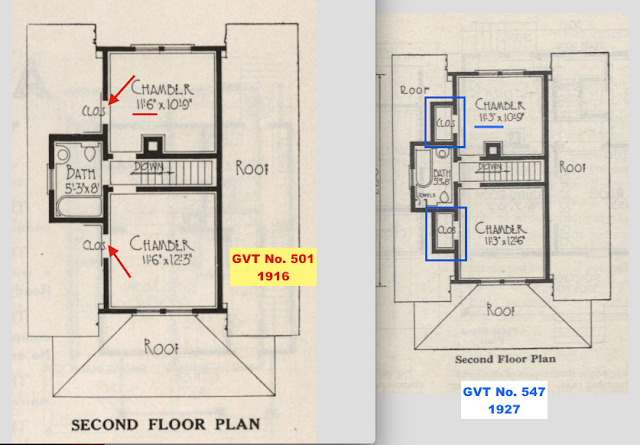 Thanks very much, Jeff Miller, for sharing your house and blue print photos with me, and allowing me to blog about them!

Posted by SearsHouseSeeker at Thursday, November 24, 2016