Sears Mortgage in St. Louis for a Beautiful Sears Lexington

Who would recognize this as a Sears Lexington??

Nonetheless, this beautiful home was definitely bought as a kit home, in 1930, by Ira B. Waters, and his wife, Mary (Mamie) Nunnemann Waters. I recently uncovered a Sears 15-year mortgage for this address (after about 5 hours of squinting at deed index files on microfilm, at the local library), and that is proof positive that we have, at this address, a now-authenticated Sears kit home.

Ira Waters was a plasterer, and owned his own business. Previous to moving to this big, beautiful "Honor-Bilt" Sears Modern Home, in Glendale (one of the lovely, old suburbs outside of the city of St. Louis), he and Mary lived for decades on Easton Street, in the city of St. Louis.  Ira and Mary were in their early 50s when they visited the St. Louis Sears Modern Homes office, looked through a catalog of designs, and settled on the stately 7-room colonial, the Lexington.

Ira and Mary may have seen the cover of the 1928 Sears Honor-Bilt Modern Homes Catalog, which featured the Lexington:


And, inside the catalog, they would have seen the black-and-white rendering of the Lexington...
...and then, read 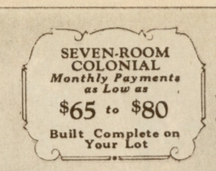 And, apparently they did love the visual of a big, white, colonial home with moss-green shutters, because that is how the house was painted for all of its years, I believe... until the most recent owner bought it in 2008, and made many renovations.

This remodeling was a real disappointment to Buffy and Jack M., owners of the Lexington on N. Sappington Road throughout the 1980s and 1990s.  How do I know this? Well... as it turns out, I've met Buffy and Jack! I met them at a neighbor's Christmas party in 2011, the first year that we moved to our home. Buffy and Jack, a lovely couple a bit older than I, explained to me that they knew our neighbors, because they had lived nearby... "In the big house at the end of Sappington! You know it! It's the very last house, just before Manchester! Oh, that couple who bought it, they told us they loved it just the way it was... and, now look at it!!"

Well, I wasn't familiar with the house (and I certainly had no idea that it was a Sears house), but I quickly became familiar with it.  The next time I drove by it, I noted its beautiful landscaping, and its dark brownish-grey paint, and beautiful white edging, and imposing front porch.  I couldn't imagine what Buffy and Jack objected to, but I guess they were partial to the traditional white with moss green shutters.  And... perhaps to the original façade, which has now been changed with the extension of the front porch all across the front, the replacing of the front door with a big, beautiful new one, and the addition of the three dormers.

Finding the Mortgage and

Documenting the History of Its Owners

This house represents my first big Sears mortgage find. It is, to me, incredibly ironic (and exciting!) that the first mortgage that I was able to link to a Sears home in St. Louis, would be for this house that I know (the outside of) so well, that I see so often, and whose previous owners I have shared a glass of wine with at Christmastime.  When, using census records on Ancestry.com,  I linked the name Ira B. Waters to an address on nearby N. Sappington Road (thanks for that hint, Andrew M.!), I was pretty excited. But, when I plugged that address into Google Maps, and it landed square on THIS house, well.... my mouth popped open, my eyes bugged out, and I let out quite an excited yelp, I'm pretty sure. My husband didn't know what on earth was going on.


Still, though, I hadn't even thought about what model the house might be, and, frankly, I couldn't associate this big, extensive, dark brown-grey house with dormers, to a Sears model. Even though I drive by it and take note of it often, I didn't have an idea of how many windows there were, but I knew that it had a big, long porch across the front, dormers, and that it was no small house.


So, I checked the online files of the St. Louis County Department of Revenue Real Estate information web page.  That's where I go to find house history and footprint information, for homes in this area. And I came up with a footprint image that was pretty comical... the house has additions all over the place.  Check it out in the image below:


I excitedly rushed onto Facebook, to share my huge news with my house-hunting buddies in our Sears Homes and Plan Book Houses group.  I started babbling about finding the mortgage, about having met the previous owners, and I posted the address, and mentioned the size of the original house's footprint. Before I knew it... Andrew, I believe, said, "I think it's a Lexington." A LEXINGTON!? I couldn't believe it. But, with further research, some time on Google Maps, and a drive by to take some photos, I realized that it sure as heck was a Lexington.

Although I don't have any interior views of the Glendale, Missouri Lexington, here are a few from a real estate listing for a Lexington in Flint, Michigan, that has recently been bought and is being re-habbed to be made into a center for helping wounded veterans*(see end of post for more information on that). This is an authenticated Sears Lexington, and is located at 2002 Windemere Avenue, Flint, Michigan:

Up until about 1926, the Sears Lexington was a slightly different model. Though also a grand colonial, it had only 3 windows across the top, not the five of model 3255, which made its debut after 1926.

Lara at Sears Homes of Chicagoland posted in 2014 about a beautiful 1921 3-window model. You can read her post here, to see more photos, or see the full set of photos from the sale listing on Trulia, here. The photos below are taken from the Trulia listing, and are shown on Lara's blog, as well. They give you an idea of the quality and elegance of both of the Lexington models.


We don't know what color scheme and direction Mary chose for their new home in Glendale, but she may well have chosen from the many wallpaper designs in this 1930 "Fade-proof wallpaper" book by Sears Roebuck.


Ira B. Waters and the Nunnemanns of Germany

When Ira Waters and Mamie Nunnemann first married (Mary's real name is Mamie, or Mayme), they moved in with Mamie's mother Anna Richter Nunnemann, who was a widow.  They lived at 4901A Easton Street (a street that I believe is gone, or goes by another name, now -- EDIT: Easton is now Dr. Martin Luther King Blvd), in the city of Saint Louis.  1910 census records show that, along with Ira and Mamie, Anna also had a lodger, Lloyd Waters, who appears to have been Ira's brother or cousin. Ira and Lloyd are both listed as plasterers.


Mamie's parents, Theodore and Anna Marie  Richter Nunnemann, came to the United States in 1867. They sailed on a ship named The Baltic, departing from Bremen, Germany (and then Southampton, England) and arriving at the Port of New York. I was able to see their names on a passenger list for that ship, through documents on Ancestry.com.

Theodore Nunnemann had been a farmer in Prussia (Germany), but worked as a locksmith, and at a foundry, while living in St. Louis.  He died in 1906 (I wonder if he was able to attend the 1904 World's Fair in St. Louis?), and Anna lived on until 1915.

The 1920 Census shows that Ira now owned his own contracting company, and, by 1930, still on Easton Avenue in the city, Ira and Mary/Mamie even have a "private servant" living with them, 18-year-old Elinor Fulsch.

By the time of the 1940 Census, Ira and Mamie/Mary are now shown at the address at 1380 N. Sappington, in Glendale.


I was unable to find any further information about Ira, so I don't even know how much longer he lived with Mary in his lovely Lexington, in Glendale. EDIT: According to an obituary I found in the archives of the St. Louis Post-Dispatch, Ira died on October 13, 1957. By the time of Mary's death, in 1952, and Ira's death in 1957, the couple were living back at the original Nunnemann  family's property at 4901-03 Easton Avenue (now Dr. Martin Luther King Blvd.), where they had begun their married life, living with Mary's widowed mother. Though Mary was buried in prestigious Calvary Cemetary, with the Nunnemann family, Ira was buried in historic Oak Grove Cemetary, in North St. Louis, which is now in great disrepair.

Mary, however, died in 1952, at the age of 76.  She is buried in Calvary Cemetary, in St. Louis, in a large family plot for the Nunnemann family.


*EDIT (March 2017):
Here is the Sears Lexington in Flint, Michigan that is being re-habbed to serve as a home for wounded veterans.  Click here for the news story.
EDIT June 2018
The Glendale house is currently for sale! So much expansion and interior renovation has been done to the house, that it is not really recognizable as the Sears Lexington, but let's take a look at just a few photos. These are from the real estate listing, found here.

Ha! These aerial views certainly show the amount of expansion that has been done!

We do get to see the original entry hall, living room, and dining room. The staircase newel and balusters have all been re-done with newer materials. I imagine these are the original Sears oak wood floors, though!
Compare that to the same area, though with the reverse floor plan, of the same model Lexington, in Flint, Michigan:
This view of the dining room, shows Sears La Tosca door hardware:


Here is the original living room, though re-done:


View from the back of the house, show how hugely expanded it is:


To close, let's take another look at the Sears Lexington in the 1930 Sears Modern Homes catalog, followed by a view of the front of our Lexington at 1380 N. Sappington Road, Glendale, Missouri, as it looks today: