Sears Haven vs. Cornell vs. Davenport

Sears had three houses that, on the exterior, look almost identical: The Haven, the Cornell, and the Davenport. Let's see what to look for to distinguish these houses, if you run across one in the wild, and what is different inside.

The Haven
The Haven model was the first of these to be offered in the catalogs. It was available in the 1922, 1923, and 1924 catalogs.
The Cornell
The Cornell came along in 1925, was not available in some editions from 1931 and 1932*, came back in 1933, looks to be absent from the 1934 catalog, and then continued to be available until the 1938 catalog. However, in those years, there were changes made to the floor plan.
As you can see, the only thing that looks different, from this view, is the style of the porch columns. But, my research mentors pointed out to me, early on, that there was also a change made to the number of windows on the other side of the house: the living room and the dining room had only one window in the Haven, but there are two in each of those rooms in the Cornell.

So, when we run across these homes out "in the wild", the first things we look at, are the porch columns, and then the first-floor windows on the side that doesn't have the side-entry door.

There is a customized Sears Cornell currently for sale in the lovely Glenshaw area of greater Pittsburgh, and the owner shared blueprints with our research team.  Here is the page showing the double windows and three upper windows of this side of a Cornell:
Here is what those big, beautiful double windows look like from the inside of the house:


On occasion, the house you find has had the front porch columns changed, or they're made of brick, so you can't go by that. In that case, you have to try to get a look at those side windows.  Again, though, occasionally, there is no way to see that side. This model was very popular in cities -- we have found dozens of them in Cincinnati and Pittsburgh -- and houses are sometimes very close to each other on those city lots, so you can't see the side windows.  Here's an example in Pittsburgh, of a Haven with both of those issues:

This house in Pittsburgh, has neither of the original Haven or Cornell porch column designs.  And, viewing the left side elevation was impossible -- trees galore! But, fortunately, for this one, I had a 1922 mortgage tied to it, so I knew that it was a Haven.
Here's the oh-so-helpful view of the left side!
And, here's an example of an authenticated, but customized (enlarged) Sears Cornell, that also has different front porch columns.  It has the columns that we usually see on a Sears Fullerton:
This close up of the porch area, shows where editing was made to indicate the new porch column style: 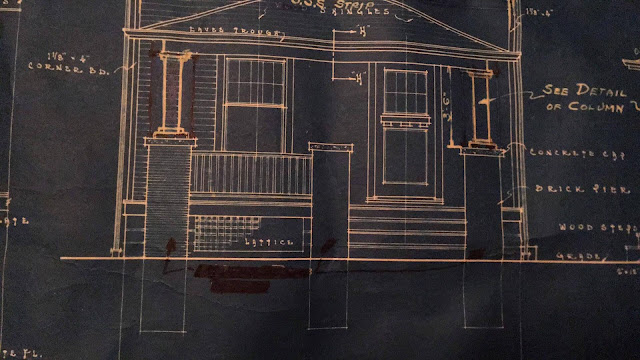 This was also stamped on those blueprints, to indicate that the house was to be built using the reverse floor plan:
First-Floor Floor Plan
We normally don't even need to look at the inside of these houses to know which is a Haven, and which is a Cornell.  But, sometimes, it happens that those exterior features are missing, windows are closed over during a siding job or renovation, and we have a little mystery on our hands. Then, if we have the opportunity to explore the interior, we know what to look for.  In that case, it's interesting to note these changes:

Here are three real estate photos from a Cornell in Pittsburgh, that illustrate a few of these points: 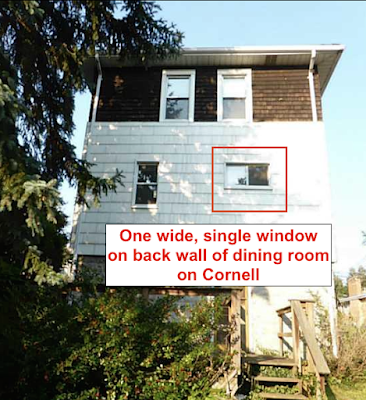 Here is the page of blueprints for the Cornell in Glenshaw, Pennsylvania, showing this back elevation on the Cornell:
And here is an interior photo of the entryway of a Haven, in Fort Mitchell, Kentucky.  It shows a more open area, with no closet, and the first tread of the staircase is rounded off to the side, projecting a little bit into the living room.

And, another Haven... this one shows the curved edge of the first step, and also shows the notched area of the corner of the dining room (click images to enlarge): 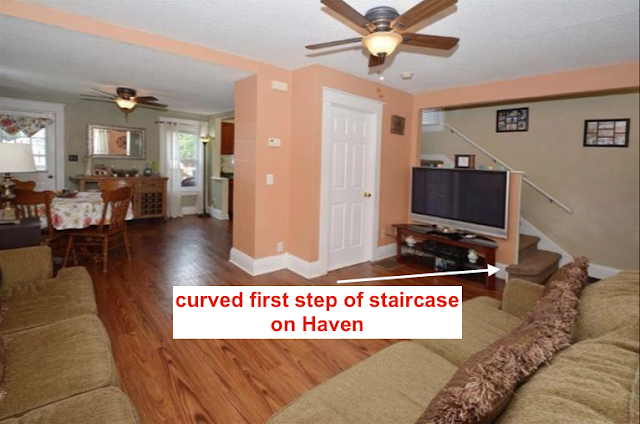 Again, the probable Haven in Fort Mitchell, Kentucky, showing the little bumped-out corner of the dining room:
The same Haven's dining room windows: two full-sized windows on the back wall (back side of the house), instead of one short one in the center of that wall on the Cornell; one single window on the side wall, instead of the double windows there, on the Cornell :

You can see that, up at the top on that LR/DR side of the house, where I have circled, both models have the same window pattern: three windows.  The middle one is for a bathroom, so that one usually is a little smaller. The other two are for the two bedrooms up on that side of the house. Both models have four upstairs bedrooms -- to start off with. But, starting in 1927, the Cornell had an additional floor plan option for upstairs.  That changes the window pattern slightly -- the upper area on this side elevation, will show only two windows, because the bathroom has been moved to the front corner of the house.

That new option cut out one of the bedrooms, and moved the bathroom to the front of the house... resulting in a change to the look of the upstairs windows.  If you find a Cornell with this upstairs layout, you'll only have two windows upstairs on that non-entry side.  Beginning in 1935, and continuing through 1938 (the last year for the Cornell )  this new-option layout became the only layout available for the 2nd floor.

We sometimes notice, though, these anomalies in the catalog.  The 1935 and 1936 catalogs show an image of the Cornell with the older window pattern (3 windows) up on the side elevation, 2nd floor, but the only floor plan actually offered, is the newer plan, that has no window there!
Here, though, is the 1938 catalog, which finally has an accurate image of the only version offered at that point, of the Cornell:
The owner of the Cornell in Glenshaw has 22 pages of blueprints for his house.  For some reason, Sears sent plans for both the A and the B floor plans -- though, actually, the house is customized a bit, and didn't follow the plans exactly, downstairs, anyway.  Here is that corner of the blueprints that shows the model number.  You can just barely make out "3226A" and "3226B":

In the 1931 catalog, only, Sears decided to replace the Cornell with a new variation: The Davenport. But, it looks like they re-purposed a drawing of the Cornell, because the house image shows a middle window up on the side elevation, 2nd floor (above the LR and DR), but, the floor plan does not have one there.  Also, the Davenport's floor plan eliminates the double window of the dining room, on that same side, replacing it with a single window, and the catalog image of the house has a cleverly-placed little tree covering that area.

Houses By Mail shows the Davenport on page 295, but, it shows no floor plan. We've not paid it much mind, honestly, and I think we've all figured it was about the same model as the Cornell, just with some shutters added. But, the 1931 catalog actually shows that this is a significantly different model from the Cornell.  It is bigger, at 22 X 28 (Cornell's footprint is 20 X 26), and the interior layout is quite different from either of the Cornell's plans. Let's take a look.


We have only one Davenport on our National Database of Sears Homes, and it's a beauty, in Arlington, Virginia.  We know it's most likely a Sears house, because it has  Sears La Tosca hardware, and it pretty much follows the plan of our Sears Davenport.
This image shows the new placement of the closet, under the staircase, and the long entry hall, as well as a tiny view of the La Tosca hardware on the door handle. 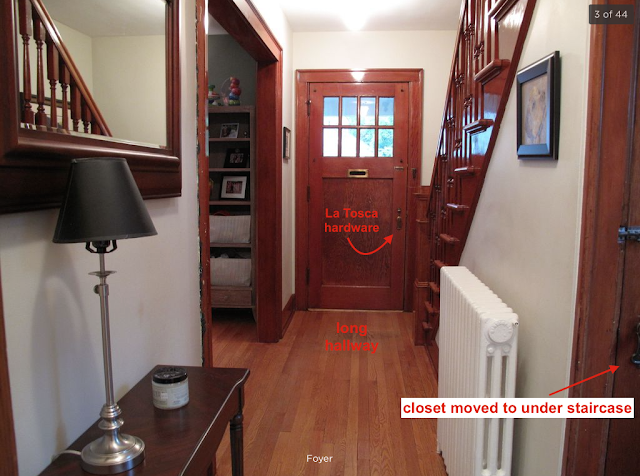 The second floor shows some big changes to the floor plan. It's really nothing like the Cornell at all. The long, narrow hall is new, the bathroom has really been downsized from what it was in Cornell B, and that back bedroom is a small one.

This view of the Arlington Davenport's second floor, shows that it doesn't quite follow what was offered in the catalog. They must have asked for some customization, because this image shows the stairway as a straight one, with no turn, yet the catalog image for the second floor clearly shows a turned staircase. We do see La Tosca hardware again, though!
Summary
Here's a quick summary of what was offered, when:

We have seen regional differences sometimes, in the catalogs, or slight changes from one edition of a year, to another, so it's possible that someone might have a 1934 catalog that shows the Cornell, or a catalog showing the Davenport in another year, but, this is what our team of researchers has in their catalog collections.  If you know of any differences from what I have listed above, please let me know!

The Aladdin Liberty model
To add a bit more confusion to the matter, the Aladdin Homes kit company offered a model that, on the exterior, looked pretty much just like the Sears Haven... except for the front porch rails and columns. Their model was called the Liberty, and had two floorplans:

The Customized Cornell in Glenshaw: One Last Look

And, if you're interested in living in an enlarged and customized Sears Cornell, in Glenshaw, Pennsylvania, here again is the listing for that house, at 904 S. Park Avenue, so you can see more photos. This house has had a bit of an addition put on the back, to add more kitchen space, and they've pretty faithfully kept the Craftsman style, including some of the original cabinets: 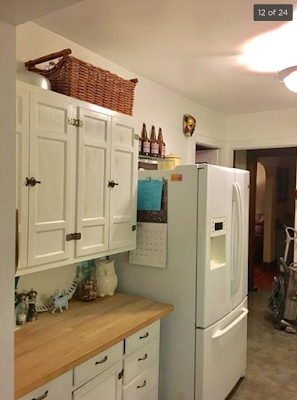 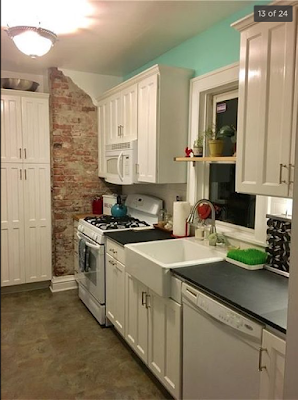 They also expanded the master bedroom, to make a master suite, with walk-in closet, and a nice-sized master bathroom, that also faithfully keeps with the Craftsman-era style of the house (click any photo to enlarge): 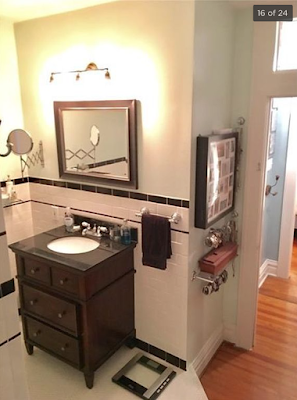 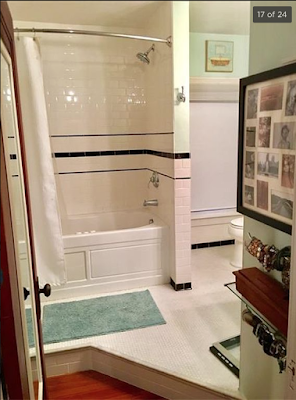 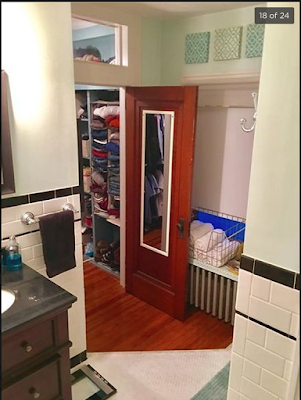