Here's a great example of a Sears bungalow that we don't show that often: the Sears Wayne model. The Wayne was first offered in 1925, replacing its almost-a-twin (at least from the outside), the Delmar, which was only offered in 1924 (researcher Andrew Mutch did an informative blog post about the differences, here). We find the Wayne in the catalogs through 1931.  I found this Wayne just through a real estate listing, a few years ago. I'm always hoping to find Sears houses in Middlesex County, New Jersey, because I've done research in the historic mortgage archives there... but, the searching is slow-going, because there is only access to the mortgage books listed by buyer... whereas we usually look through the books that are alphabetized by the mortgage lender. That helps narrow the search, because we can just look under the names of the Sears trustees. Having to look through the buyer books, means turning every single page of the dozen or so books, from this densely populated county, through about 15 years, just hoping to find a listing of William C. Reed or Edwards D. Ford. So far, in one outing, helped out by my sister, we got through the books for the last names starting with E, I think --ha! Lots more visits will be required. So... we don't know if this house had a mortgage through Sears (as many Sears houses of this era, did), but we are confident that it is a Sears house, because we found a few indicators: Sears Stratford model door handle hardware; a plinth block on the staircase, connecting two sizes of baseboards, which is not a usual use for a plinth block (they are more normally found at the base of door trim), but which Sears seems to have offered as a solution for the difficult carpentry task of connecting baseboards at different angles; and the floor plan follows along perfectly. Here... I'll show you:
Here's the first-floor layout that we're looking for. Notice the staircase off to the side... that is one glaring difference between the 1924 Delmar and the 1925-31 Wayne... the location of the staircase. We're not sure of the build date of this Wayne, because Trulia says 1924, and Zillow says 1940... and it can't be either of those, since this floor plan was not offered in 1924, and the Wayne was no longer available, in 1940. Probably, one of those build years comes from the Middlesex County assessor's office, but, as I've mentioned many times before, those build-year records for houses, in many county assessor's offices, are usually off by some, or many, years. This house was probably built some time in the 1920s, because the Stratford design door handle hardware it has, is not shown in the 1930 building supplies catalog.
Here's the living room, looking down from the staircase, toward the two small windows of the left-side wall of the house. The front door, front window, and entry into the dining room, are just where we expect them:
Here's that front door, in the 1929 Sears Building Supplies catalog:
This house had a small addition put on to the back, and, probably at that time, the kitchen was re-configured a bit. It looks, from the style of the cabinets, to have been done probably in the 1960s. Here's the normal rear view of a Wayne--this one is in Eastlake, Ohio. As you can see, there is a big dormer on the rear roof, as well. The rear window of the dining room, has been changed into a set of sliding glass doors, to access the back deck that was added on:
And, here is our South Plainfield Wayne, from the rear: 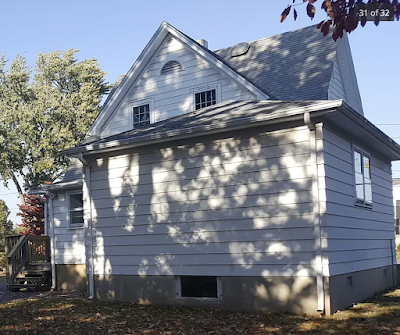 ...and, from the front, where you can see that addition: 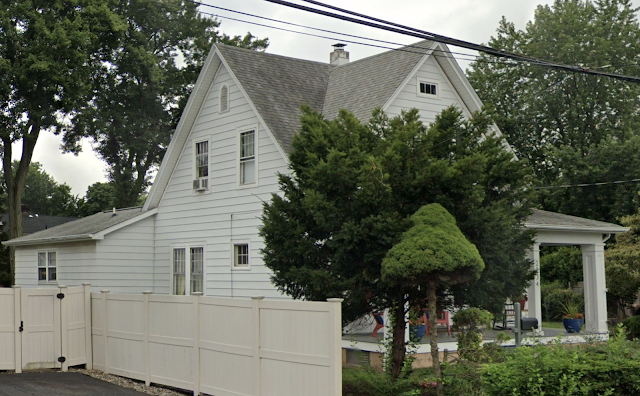 And, while we're at it, this photo shows this side's windows, against the floor plan:
You can see, from the window and door trim in this added-on area of the house, that it was added on -- the rest of the house has wide, craftsman, back band trim, as you see in the 1930 catalog, here:
The dining room has the original, Craftsman trim on the windows, but, on the original back wall of the dining room, we see an entry door added on, and it has a much skinnier, different style trim, which is what you see in the addition, and in the re-done kitchen: 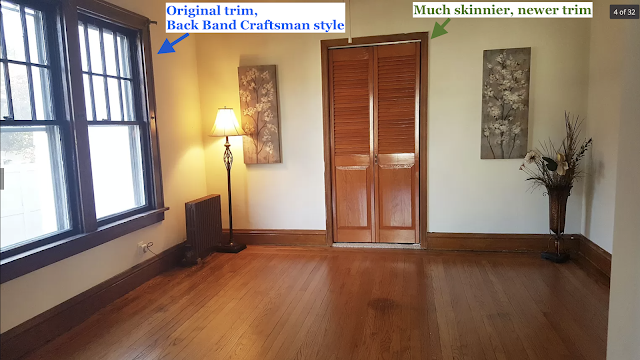 The kitchen, then, does not follow the floor plan correctly, because it was re-organized. The area indicated here, in yellow, was all changed up, changing the access to the basement staircase and side entry door, and opening up access to the living room, so you can now see the front window, and the staircase, from the kitchen, whereas we normally can't see that from the kitchen. The blue arrow points to the all-important furnace vent chimney, which we also see on the floor plan, indicated in blue.  I say, "all important", because it's one thing that you will almost never see changed, on a house... unless a major re-haul of the entire layout has been done... and this is something that I am frequently reminded of by my research buddies (I'm lookin' at you, Karen ;) ).  This helps us when we find a possible match for a Sears house, but it has some discrepancies. To rule it out as just a "lookalike", the placement of the vent chimney is something we look at. 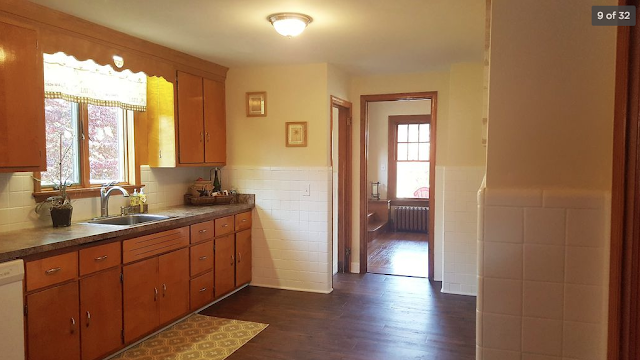 Second Floor, Sears Wayne
Upstairs, the floor plan looks like this:
Here's the staircase, with its closet door at the top, and plinth block as it joins the landing: 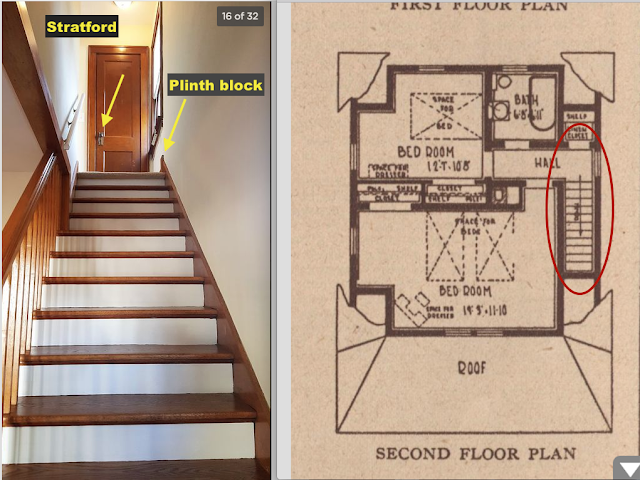 Here's the plinth block, and you can see how it's connecting two different sizes of base board trim: 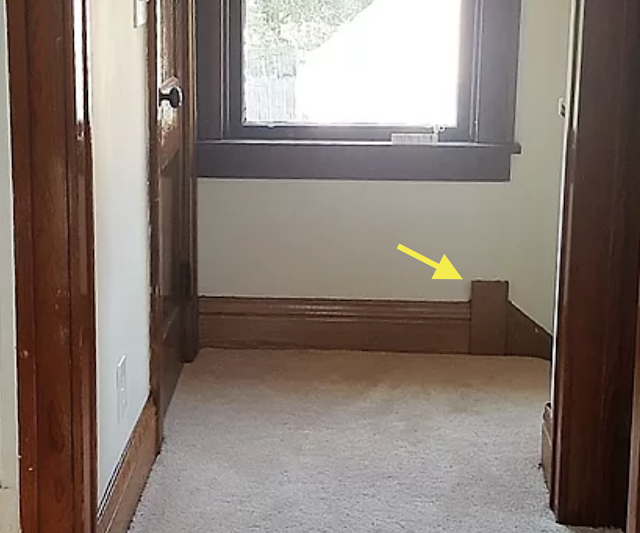 And this photo shows how all of the expected doors in this upper hallway, are in the correct spots:
This photo of the closet corner of the big, front bedroom, shows the double doors of the closet, with Sears Stratford design door handle hardware: 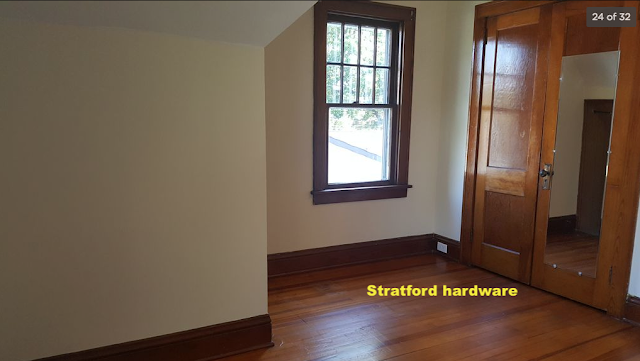 As you can see in the write up for the Wayne, in the 1928 catalog, Stratford door hardware is mentioned as coming standard with this model:
Bungalows came in all kinds of designs and sizes and styles, by every possible housing company, in the 1920s. It was a hugely popular style, in general. Two things that help us spot a Sears Wayne, are the distinctive lines of the front porch roof, and the chunky style of the outer columns on the porch. It's also unusual to find no porch railings, and no concrete or brick piers in the front... the columns just go from the ground to porch roof... two slim columns in the center, and two chunky columns, on the outer edges: 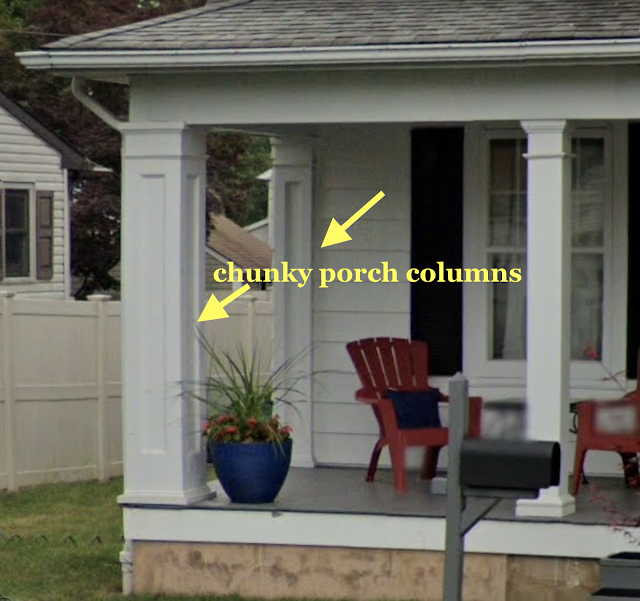 Most bungalow porch roofs follow down from the peak of the roof, in one straight, or slightly bent line, like these two Sears models, the Lakecrest, and the Vallonia:
The Wayne, however, has a pretty steep pitch to the main roof, and the porch roof is set in with a triangular section on each side of the porch roof:

You can see that pronounced angle well, on the Sears Wayne in Eastlake, Ohio:
This is a great example of the Sears Wayne, and just one of the many Sears houses that I'm sure are dotting the landscape of Middlesex County, New Jersey. If you'd like to see the rest of the photos of the house, here is the Zillow.com listing, from 2017. Let's finish with the full-on front view of this very nice house: 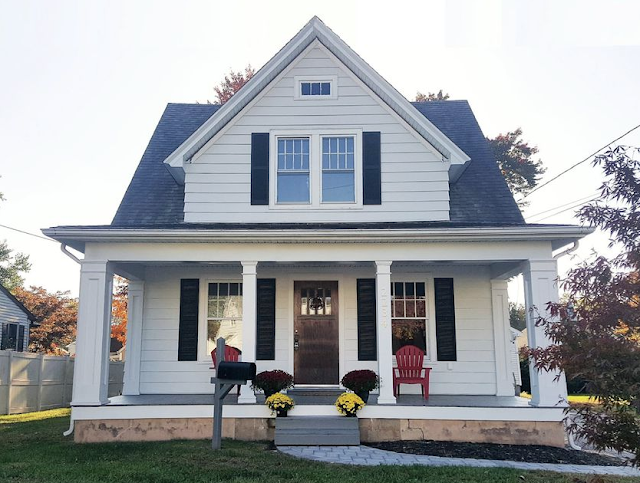