Last year, right around this point in October, I did a blog post about an authenticated Sears Parkside model in St. Louis.  Fellow researcher Cindy Catanzaro, of Sears Houses in Ohio, had also shared with me a photo of a cute Parkside in Middletown, Rhode Island, so I included that in my blog post.


This week, I received a message from the owner of that sweet little Sears house, and she shared with me that she had put together a website telling about her home's history as a Sears house, including photos taken during construction, by the original owners, photos of paperwork with Sears regarding the ordering of the kit, and various other interesting photos and bits of information.  It's a great read, and a good-looking website.  Take a look for yourself, by clicking here!

Here is the house in question (with its previous paint colors), showing off its Christmas decorations... and the trademark Sears curly-cue-ended decorative iron strapping : 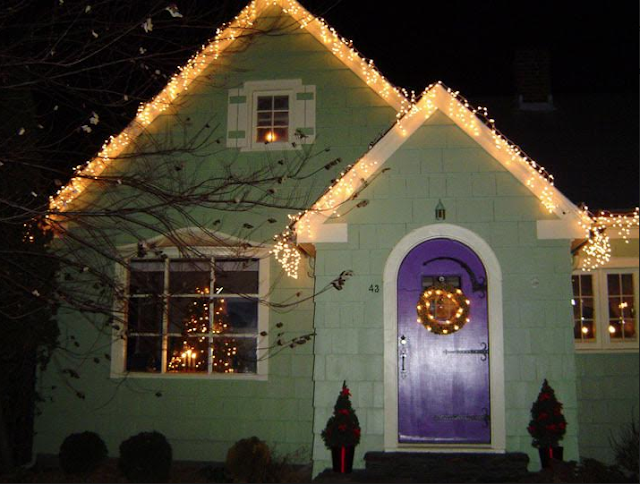 J. E. Latham was a cotton man. A big cotton man, according to the papers.  In the 1920s in Greensboro, North Carolina, he was one of the main stockholders of Latham Cotton Company ("The name Latham in the cotton business is known in every state where cotton is produced and in every country throughout the world where cotton is sold to mills."*), though, before its dissolution in August of 1922, he was involved in the Latham-Bradshaw Cotton Company, which split off to form Bradshaw-Roberson Cotton.  But, besides being a "cotton merchant and capitalist" (as he was described in an article in the Greensboro Daily News on September 4, 1921 [page 6]), he was also involved in buying and selling real estate, through his company, "J. E. Latham Company". And, that's where Aladdin Homes enters the story.
In 1917, the J. E. Latham Company was advertising homes and lots in the lovely Fisher Park neighborhood in Greensboro:
In 1919, Latham ordered twelve Aladdin homes (among them some of the finest designs Aladdin offered) to be built on spec in the Fisher Park neighborhood. These homes were built on West Bessemer Avenue, Wharton Street, and Keogh Street (now called N. Eugene St.). Latham bought Aladdin Readi-Cut kits to be constructed on these plots, and then offered up the homes for re-sale.
The October 1, 1919 issue of the Greensboro Daily News, listed 11 building permits issued to J. E. Latham, for lots on Bessemer, Wharton, and Keogh:

The kits purchased in 1919 by Latham are of twelve different Aladdin models:
Though the kits were purchased in 1919, the Guilford County records give 1920 and 1921 build dates for many of the homes.

Let's take a look at the still-beautiful homes that Latham had constructed in Greensboro. Settle in with a nice glass of red wine (or a cup of hot cocoa), because we've got eleven houses to see:

Aladdin's Colonial model is one of its biggest and grandest homes.  This one has had a few modifications made to it, but it is documented as a Latham home. He sold it -- to great acclaim -- to Lou M. Bradshaw, for $13,000, in 1922. Bradshaw was, I believe, the Bradshaw of the Latham-Bradshaw Cotton Company.
Here is the W. Bessemer house, shown next to the 1917 Aladdin catalog image of the Colonial.

When the home was sold to Bradshaw, the price of the purchase made quite a splash, headlining a newspaper article about home purchases in the area:
A check of the 1923 Greensboro city directory shows us that the "lot on Bessemer avenue" is, indeed, at the address of the Aladdin Colonial:


Here is a look at the floor plan of the Colonial, as shown in the 1917 catalog:

On the lot right next to the Colonial, sits this beautiful Aladdin Brentwood:
And, here it is shown next to the 1917 Aladdin catalog image.  You can see that the style of the door (at least the overhang) was modified, as was the look of the small roof over the front bump-out on the left side of the front elevation:


The next houses are all in the same neighborhood, a short stretch of W. Bessemer Avenue, that changes name at the bend of the street, and becomes Wharton Avenue.

I couldn't be more delighted to have found this Kentucky! Not only am I tickled to see an authenticated Aladdin Kentucky (there are a number of lookalikes out there, by different companies), but it was amazing how I found it.
I knew that one of Latham's homes was a Kentucky model, but, after finding the Colonial and the Brentwood, I had spent a good bit of time Google "driving" the streets on that side of the Fisher Park neighborhood, interspersed with various Google searches, and historic newspaper searches.  I had centered my search in the Fisher Park neighborhood, after running across this nomination form for Historic Fisher Park to be placed on the National Register of Historic Places. I had done a search for J. E. Latham, and I ran across the mention of the 1913 home of James Edwin Latham (known as the Latham-Baker house) in the NRHP nomination form. It gave the address as 412 Fisher Park Circle, so I began hunting in that area, figuring that his Aladdin spec homes might be nearby.  By chance, I hit upon the Colonial and the Brentwood, and then the Marsden (which I'll be showing in a bit), but I just couldn't find the Kentucky... or the Shadow Lawn, which I was also itching to see.
So, after being side-tracked by various things, I decided to come back to the Google map of the area, but I hadn't actually noted yet what the address was of the two big homes I had already found. I remembered a cross street, so I figured I'd just plop my Google map cursor right around there, and start looking on more streets.  Well, I didn't accurately place my cursor on the lots where the Colonial and the Brentwood sat... instead, much to my delight, when I switched to street-view, from map view, lo-and-behold, I found myself smack in front of the Aladdin Kentucky! And right next to it, was the beautiful Aladdin Shadow Lawn that I'll be showing at the end of the blog post.  As I "drove" down the street, I realized that I had hit upon almost all of Latham's plots, as I ran across the Pasadena, the Willard, the Winthrop, the Georgia, and the Venus... not to mention what I think are examples also of an Aladdin Hampshire, and an Aladdin Sunshine.
I have to admit that, though the Kentucky is 43' wide, sitting there next to the other bungalows, it doesn't look like the big, sprawling house that I thought it was. There was an even smaller additional model, in 1915 and before, but this house on W. Bessemer is the biggest version.

The Aladdin Willard model looks to have only been available in the 1918 and 1919 catalogs. I don't find it in the 1917 or 1920 catalogs. It is a modest bungalow, but, like the other homes on this street, it has been kept up nicely.  It, too, seems to have the reverse floor plan to the catalog, and, of course, the great screened-in porch. 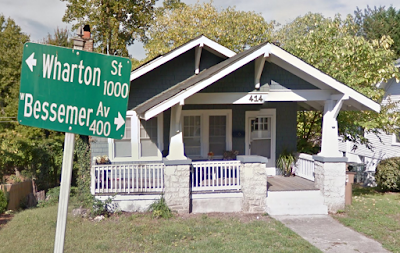 The image above is from Google maps street view, and it shows us that West Bessemer Avenue stops here, at this lovely Aladdin Winthrop, and becomes Wharton Street. The next several houses will be on that stretch of Wharton Street. 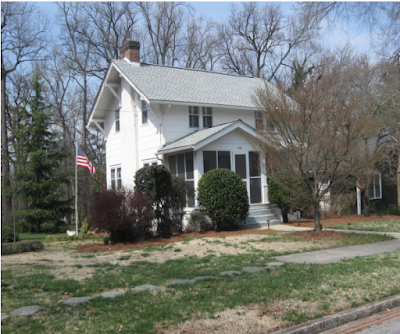 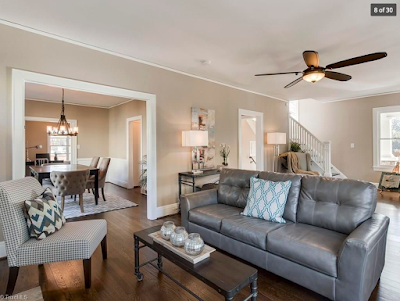 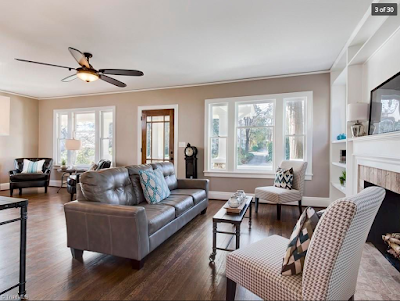 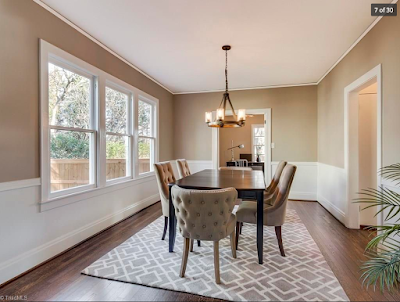 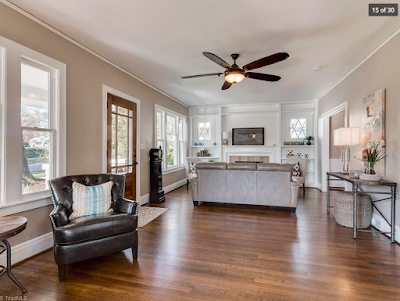 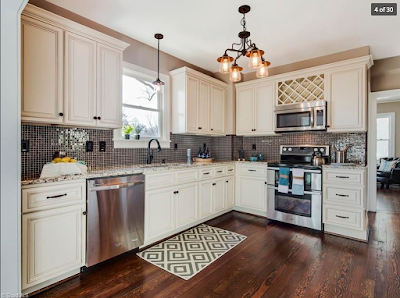 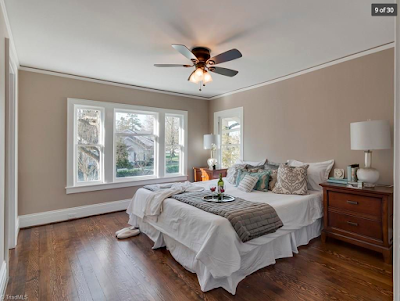 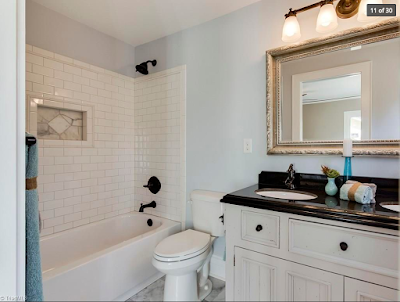 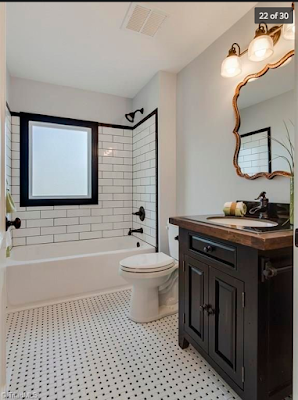 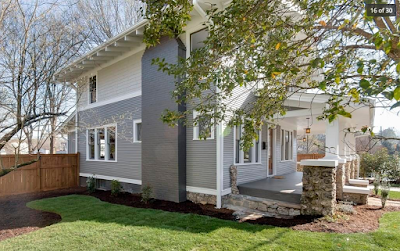 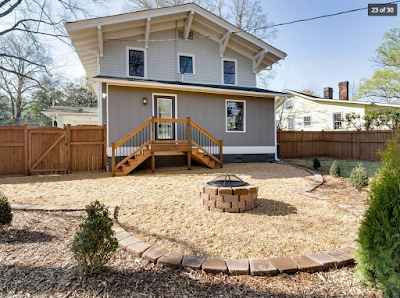 Now... that is the end of the homes that I found, from the list of those purchased by J. E. Latham Company, in Greensboro, North Carolina.  He also bought an Aladdin Hudson kit, and an Aladdin Florence kit, but I have not found them (though I noticed that he had two building permits for Keogh Street (now N. Eugene Street), and I didn't see either of those models on that street. Here they are from the 1918 catalog: 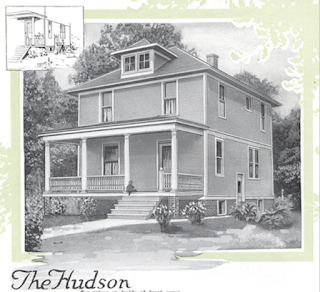 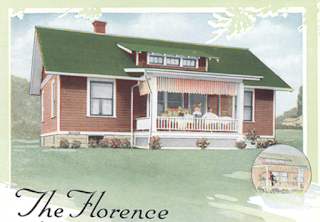 If you run across them in Greensboro, please let me know!

What are Aladdin homes?
For more information, read this previous blog post.

Addendum:
Another Shadow Lawn in Greensboro
One of my researcher friends ran across this August 27, 2016 online newspaper article, published by N&R Greensboro.com.

In the article, much to our delight, the topic of Greensboro Sears homes was discussed.  We LOVE Sears homes, and we LOVE learning about them and finding them around the country (so much so that we have been working on a National Database of Sears Homes, and we now have over 5000 Sears homes on it). But, what we see in this article, is a common mistake: a house known to have been a mail-order kit house, is referred to as a "Sears" house, when it is actually a kit home by a different company.  The house above, at 706 Martin Luther King Jr. Drive, Greensboro, North Carolina, is the one mentioned in the article, but it is not a model offered by Sears. Instead, it is a beautiful example of the Shadow Lawn model made by the Aladdin Company of Bay City Michigan (they also had a Wilmington, North Carolina plant, starting in about 1920).  We would love if the writer of this article, Harry Thetford, would consider writing a new article to point out that, not only is this house an Aladdin Company house, but there are many other Aladdin homes in Greensboro.