This Sears Elsmore in Arlington, Virginia, is a wonderful example of this model from Sears. Looking at it here, from this view, it looks like a textbook example of the pre-1921 floorplan (with inset front door area). However, if we go just a bit to the left, or move around the corner to see the right side and back of the house, we'll see that this is another case of a Supersized Sears House. Today I present part 2 of my series of Sears houses in Arlington, Virginia, that have been "Supersized"... that is, added onto, rather than demolished. I first showcased a number of these in my last blog post.
Now, let's see the left-side view:
The Sears Elsmore, as designed, is a one-story model, with, I guess, room for expansion up into the attic area, if desired. But, this house on N Tuckahoe Street has an additional lower level that is sitting on what certainly looks to be a new concrete foundation. To accomplish this, the land on the left side of the house must have been excavated, and the house re-seated on a new lower level and foundation.  I'm really glad that the owners who chose to do this, retained pretty much all of the original house.
Additional space was added behind the original house, which you can see from this right-side view from Google Streetview:
Judging from permits, it looks like this major renovation was begun in 2009 (when permits were obtained for $130,000 of work). The real estate photos from the 2011 sale of the house, show some interior views with original Sears colonnades and other Craftsman trim, now coupled with a very modern, high-quality, minimalist look to the new parts of the house.
From this image of the original in-set entry way, you can see all the way back to the new part of the house, with its wrought-iron stair railings:
Thanks to the 2011 real estate photos, we have some additional views of the interior, showing us the transition from old to new: 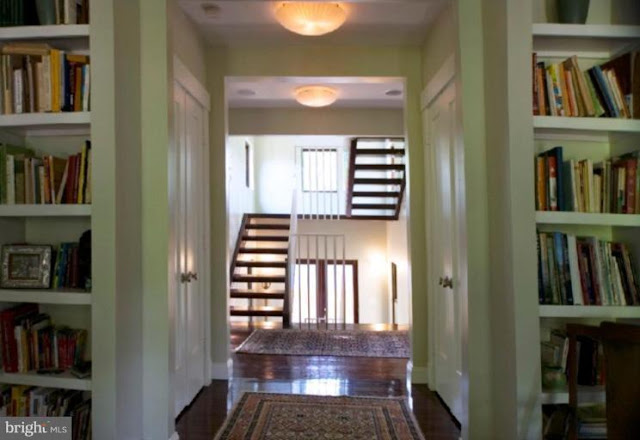 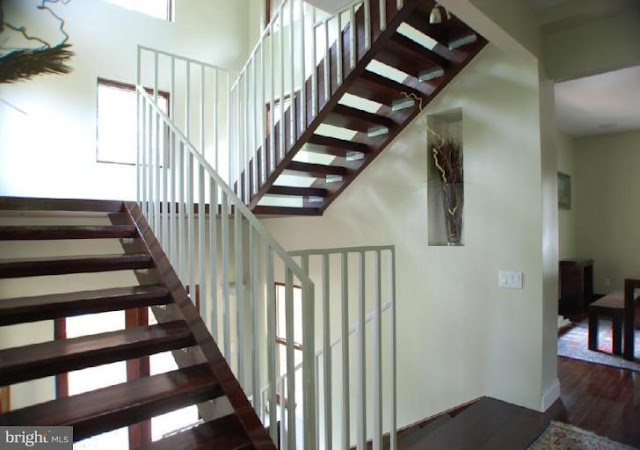 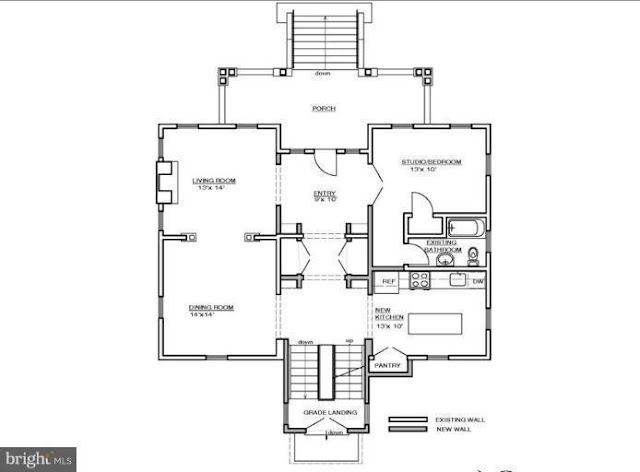 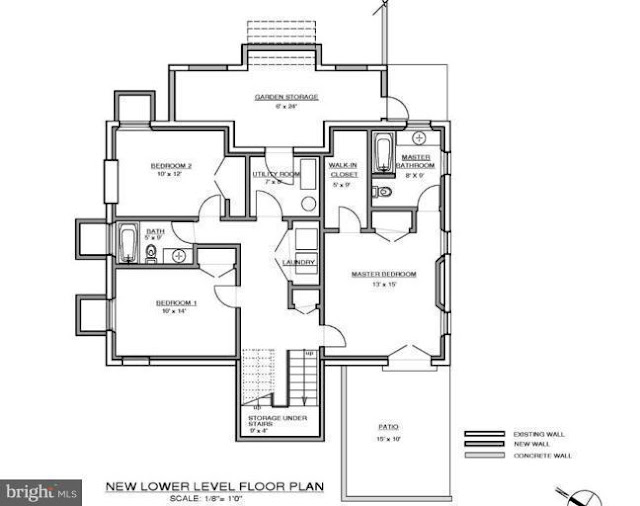 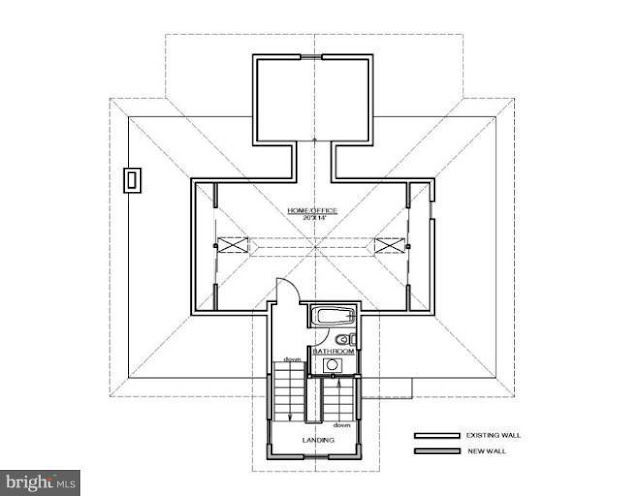 Since the time of the 2011 sale of this supersized Elsmore, the house has been re-painted a deep, dark brown, with creamy white highlights. The front porch columns (which are a trademark design from Sears), the porch railings, and the stucco-and-timber front gable, are all back to the creamy white of the catalog image:
Unfortunately, I was not able to tie this house to a Sears mortgage, so it is, technically, not authenticated, but we are fully confident that it is an early Sears Elsmore. The original address (before the 1934 re-naming project of the streets in Arlington County), was 109 Gould Street, as this area was platted as Gould's Addition. A 1935 property card shows the then-owner to be M. V. Brunner: 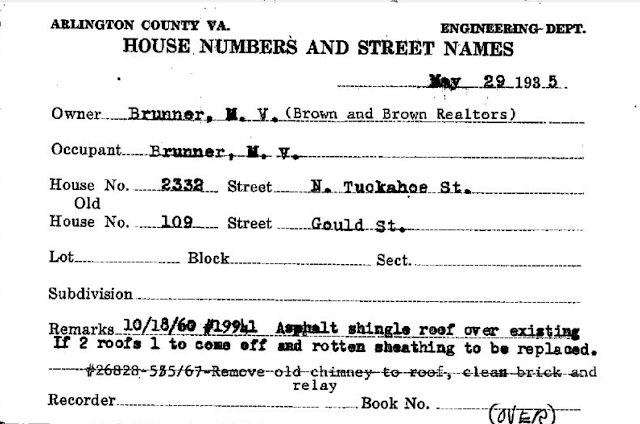 It turns out that M. V. Brunner is Mabel Viola Brunner (the former Mabel Viola Cox), who married Lester Carlisle Bruner in 1906:
Sadly, Lester passed away suddenly, in 1920. I don't believe that their 1920 residence was this house, only because no one around them on the 1920 census, is around them on the 1930 census (no street name is given in 1920)-- but, I could be wrong. Lester was a teacher of some sort (I can't make it out on the 1920 census). In 1930, Mabel was living in this house with her daughters Ethel and Audrey, and son George, and she passed away in 1937, of tuberculosis, at the relatively young age of 51.
Another Supersized Sears Elsmore : 3320 3rd Street North
We have found three Elsmore examples in Arlington,  Virginia. This one, at 3320 3rd Street North, was originally added to our list by Andrew Mutch, but has been listed in a DHR: Virginia Department of Historic Resources document, too (found here, in the Special Collections... scroll down to Arlington County... not sure which Architectural Survey). We have also connected this house to a 1922 mortgage with Sears, $4,500, for Harold F. Moore and wife, Martha PB Moore:

But, even before I had found the mortgage for this Elsmore, we knew that the original owner of this house was Harold Moore, because he wrote in a Testimonial letter to Sears, about his satisfaction with his new Sears home. We have seen this testimonial on an advertising flyer from 1924, from Sears, and it was also published in a 1924 edition of the Evening Star, a Washington D.C. newspaper.
Here's the ad from the Evening Star, April 7, 1924, page 13...
...and a close up of Mr. Moore's house, with the photo that he sent in, showing the original size of his Sears Elsmore:
Sears Elsmore at 803 N Highland Street
Since I'm showing you the only other two Sears Elsmore examples we found in Arlington, Virginia, I might as well show you the one Elsmore that retains its original size and look. Andrew Mutch ( Kit House Hunters ) originally added this to our national database of Sears houses, but I was able to connect it to a 1922 Sears mortgage, taken out by Lelia A Palmer. This street was originally Virginia Avenue, before the 1934 street re-naming project.
Outside of Virginia
If you're interested in seeing another supersized Sears Elsmore, here is one in Saint Louis County, Missouri, in the lovely old town of Kirkwood:
I have still more examples to show, of supersized Sears houses in Arlington, Virginia. Check back for part 3, coming up next, where I'll showcase a Sears Americus, and several other models. As my other researcher team mates always say, at the close of their blog posts: Thanks for following along!
•••••••••••••••••••••••••••••••••••••••••••••••••••••••••
For more information on who we are, and what we do, visit our website: SearsHouses.com
Posted by SearsHouseSeeker at Saturday, May 28, 2022 No comments: