I have wanted to write about this authenticated Sears Elsmore in Kirkwood, Missouri, for several years. I first heard about it from fellow researcher Cindy Catanzaro, who found a newspaper mention of the house, and shared it with me, since this is where I live. However, when I went to take my own photos, I wasn't happy with the quality of photo that I was able to get-- the photos just didn't do justice to the house.

Now, however, I am delighted to see that there is a real estate listing for this beautiful Sears house, and the photos, by St. Louis photographer John Flack, are wonderful! Time to show them off!

Sears Model No. 208 Becomes The Sears Elsmore
The Elsmore was first offered in 1913, as model No. 208. In 1916, Sears began marketing the models with names, rather than simply numbers, and this model became the Elsmore. Here it is, in the 1914 catalog:
The 1918 catalog really gives the Elsmore its due, with a full-color rendition:
The House That Thrift Built
The newspaper snippet that Cindy sent me, was a 1921 piece that was shared nationally, in newspapers across the U.S. (I've found it in Montana, New Jersey, Oklahoma, Ohio, Delaware, Missouri, Iowa, Minnesota, and Pennsylvania). The author was Hazel Blair, and the byline mentions that the story was "Written For the international News Service". Hazel Blair was a woman ahead of her times, working for St. Louis area newspapers in the early 1920s, and later for the New York Times and The Washington Post, with at least one article sold to the Saturday Evening Post magazine. This 1923 mention of her, appeared on page 38 of the November 14th issue of the St. Louis Post-Dispatch, in a large article about women successful in writing, entitled, "Have Won Recognition in Literary Pursuits":


Hazel Blair hailed from a family of successful women, apparently, as this 1924 St. Louis Post-Dispatch story, about her aunt, Mrs. Emily Newell Blair, mentions that Hazel is accompanying her aunt back to Missouri to vote in the presidential election, and explains that Mrs. Emily Newell Blair was the vice chairman of the Democratic National Committee, and slotted to hold a cabinet position if the democratic candidate, Johnson W. Davis, won the election (remember, too, that this was only the second US presidential election that saw women able to vote in this country!): 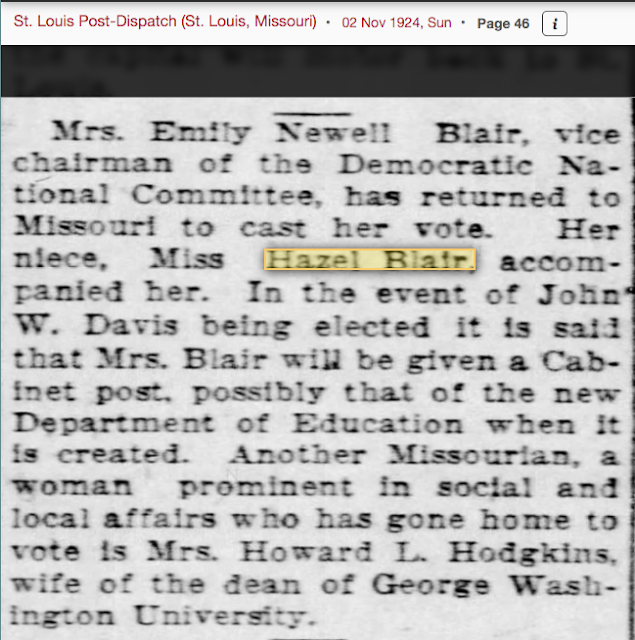 That election, however, saw Republican Calvin Coolidge take the white house (Calvin Coolidge had earlier been mayor of the town where I was born, Northampton, Massachusetts, and where our family's 1911 Sears No. 110 still stands)
But, getting back to Hazel Blair, and the Sears Elsmore she wrote about: In 1921, Hazel Blair wrote a little article about two St. Louis sisters, Hazel and Mildred Evans, who worked for the telephone company, and who decided that they wanted to have their own home. According to the story, they dreamt of having a little bungalow with a fireplace, and a "nifty lawn", and through thrift, they saved their pennies, and finally ended up building this very house on Forest Avenue, in Kirkwood, Missouri. They began by building a garage on their land, and lived there, while saving up for their house. They invited friends to help them with a "basement digging party", and then enlisted a local contractor to build their home, which they named, "Hazelen"(this surely is derived from a blending of the sisters' two names, which the 1930 census shows to be Hazel and Helen, not Hazel and Mildred, as the newspaper story says).
Many of the articles posted the story along with an image of an Elsmore... or maybe even the Elsmore that the Evans sisters built:
Here is the full text of the article-- some include Hazel Blair's name and the International News Service part of the byline, but this one does not:
I don't know if the current owners know of the full history of the house, but they do know that it is a Sears house. I also don't know for how long the Evans sisters lived in the house, but they are listed here in both the 1930 and 1940 U.S. Census lists, and also are shown in a cute 1952 newspaper story. Here they are in the 1930 census:
In the 1952 newspaper photo, Hazel and Helen are shown tending to goats on their property on Forest Avenue in Kirkwood. The title of the selection of photos, is, "They Like Retirement", and the photos illustrate the retired lives of several St. Louisans who through "developing old hobbies and new interests... combine activities with leisure". Hazel and Helen retired in 1945 and 1942, respectively, and then enjoyed raising goats, to sell their milk, and their (goat) kids, while also keeping up with raising vegetables and chickens, and remaining active in politics and civic affairs: 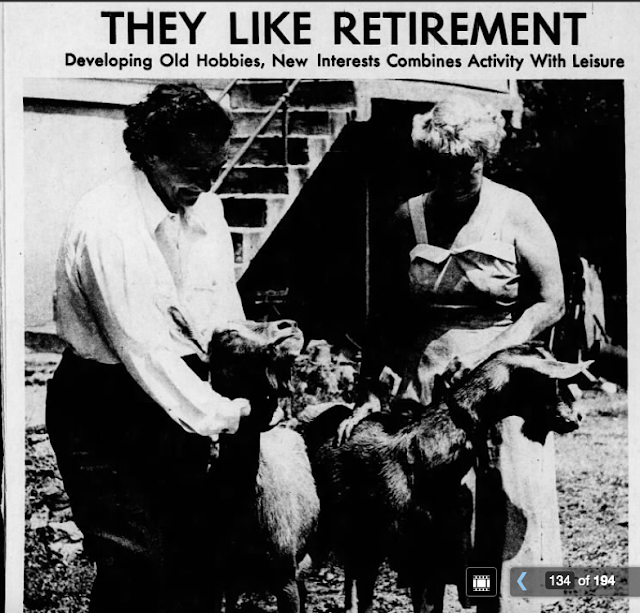 Interestingly, later that decade a line drawing of the Elsmore, with the line, "The House That Thrift Built", was used in a 1928 newspaper ad for Ithaca Savings and Loan Association, shown on page 6 of the January 20, 1928 issue of the The Ithaca Journal (Ithaca, New York):
The Current Version Of the House
Over the years, the house has had substantial additions, including an awesome greenhouse-style sun room. The yard is luscious, and full of seasonal plantings in the front, on the sides, and in the back. It's really a beautiful place. Let's take a look... starting with the current property sketch (from the St. Louis County assessor's website). Only the grey area is the original Elsmore... all of the rest are tasteful additions added to the proprty. 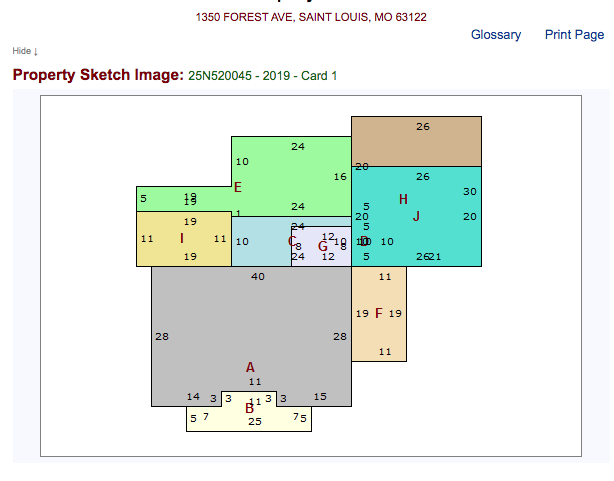 The house is a new listing, by the Kirk Holton Team of the Janet McAfee agency here in St. Louis. Here is their listing, and here is the house on Zillow and on Realtor.com (I include those last two, because listing photos usually disappear after a house is sold, on most real estate agency websites, but will remain on Zillow and Realtor.com much longer). The photos are the work of talented St. Louis photographer John Flack, who kindly reached out to me to share his high resolution versions of these photos, which you can see here. They're stunning. 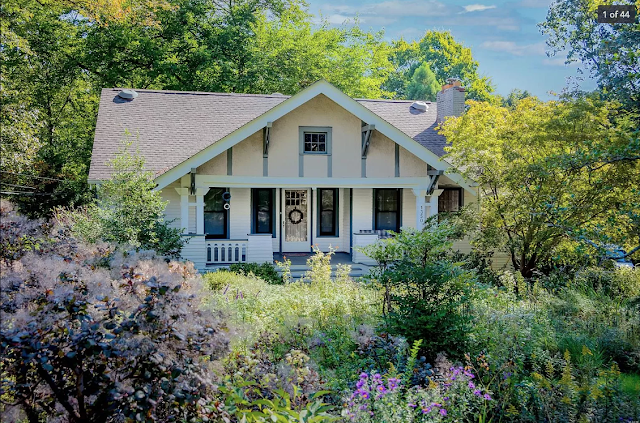 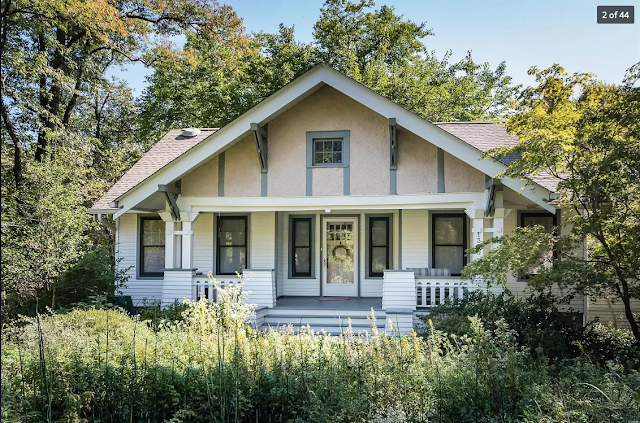 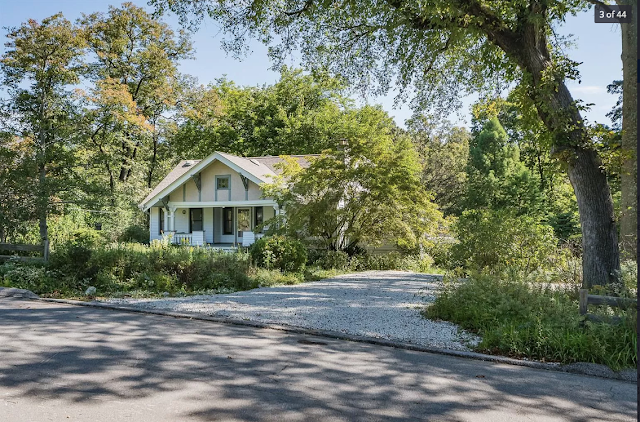 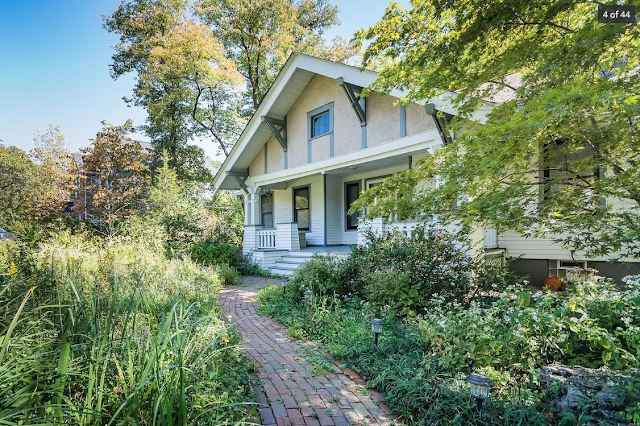 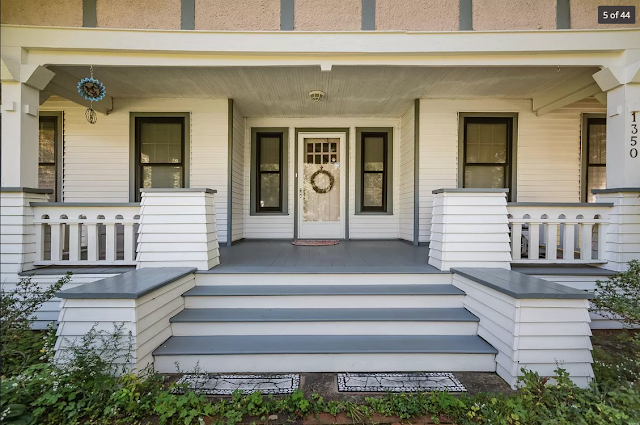 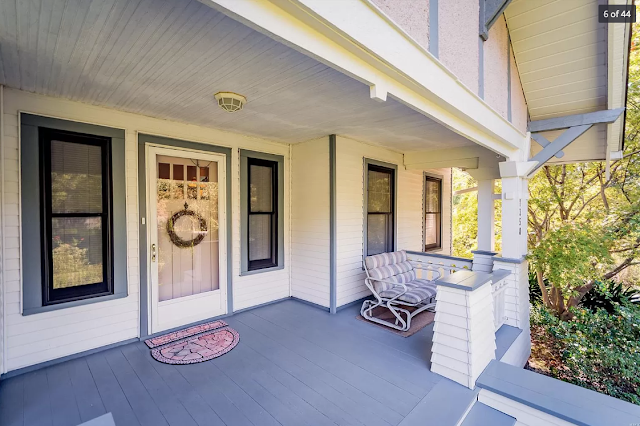 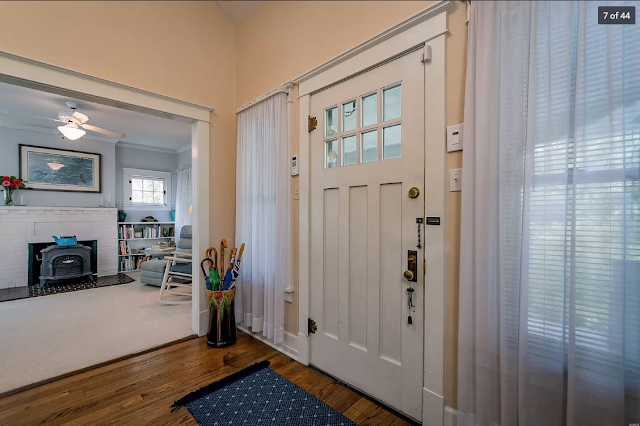 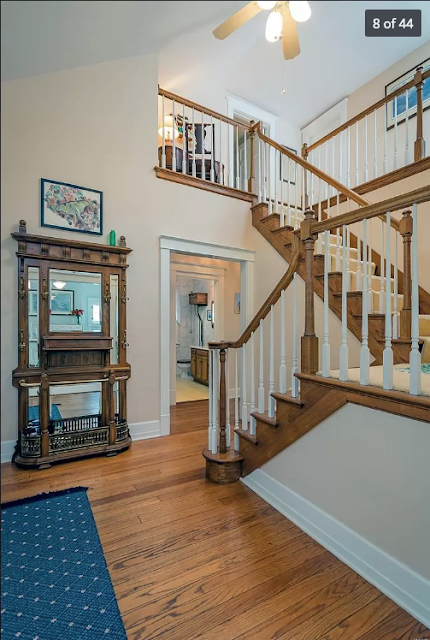 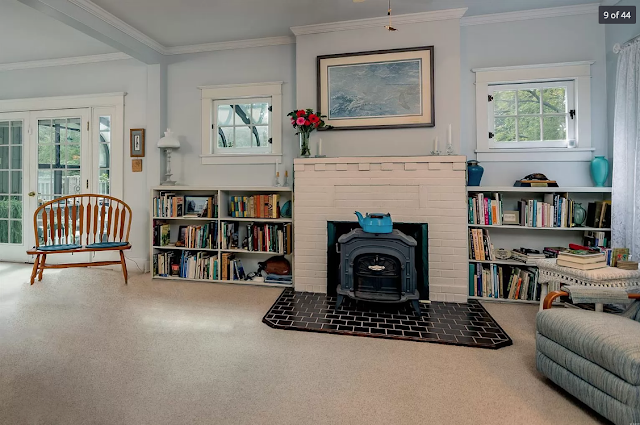 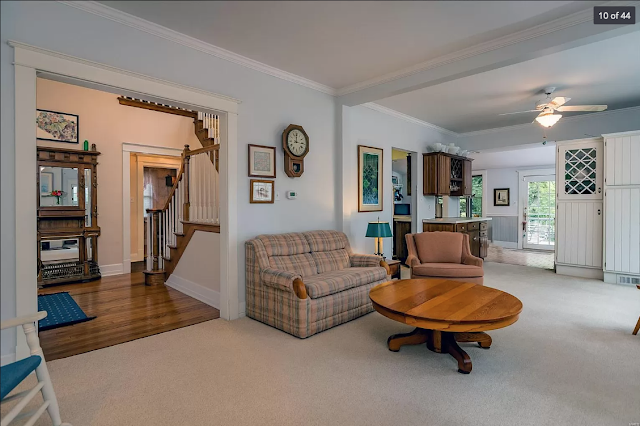 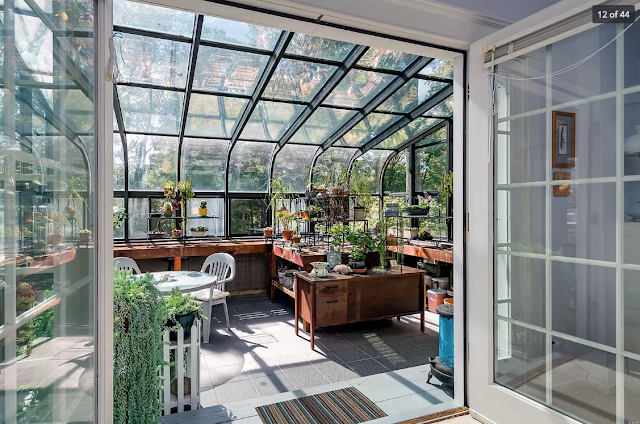 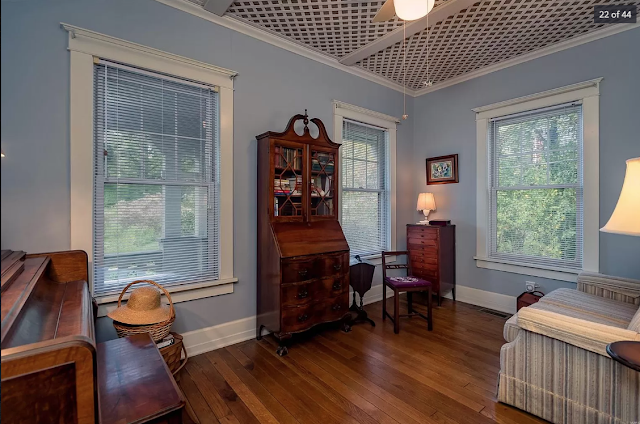 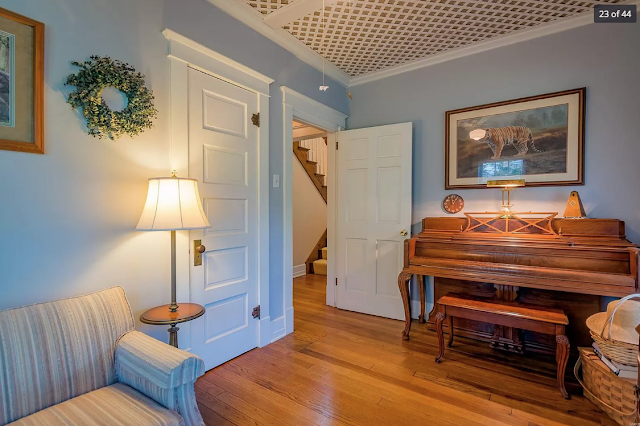 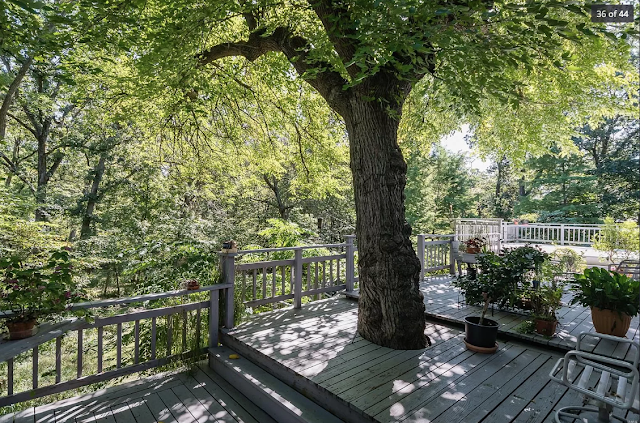 The house still has many original details. For example, the Elsmore is one of the Sears models that has the trademark Sears porch columns and 5-piece eave brackets. You can see them on the catalog image, where you can also see that the front porch railings are also the original design from the original Sears kit: 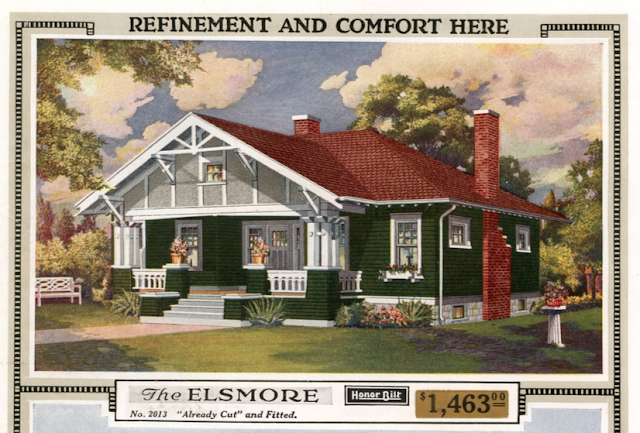 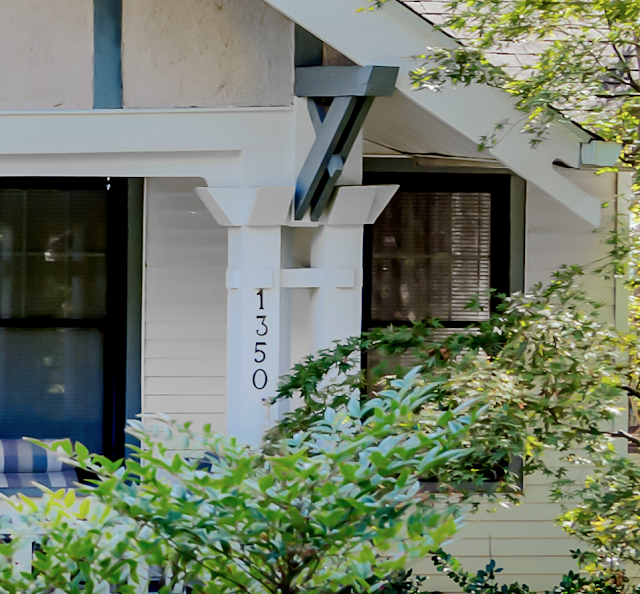 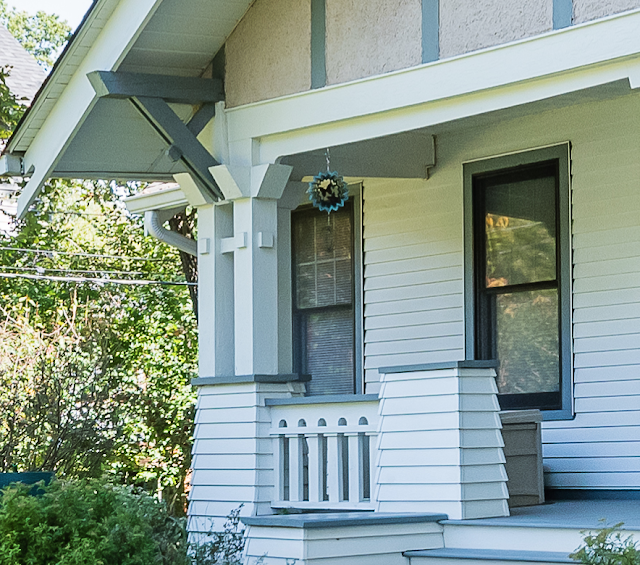 The gorgeous front door is the Sears Craftsman-M model oak door, shown here in the 1918 Sears Building Materials catalog, along with what we call, "the Sears hinge" (because Sears is the only company we've seen including this particular hinge on their houses), and the Chicago design door hardware: 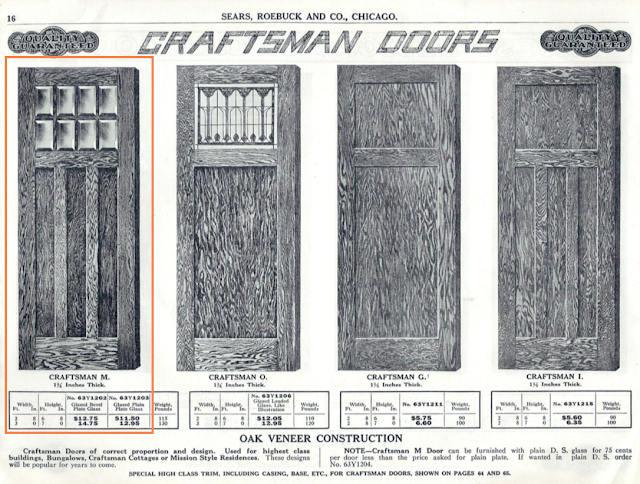 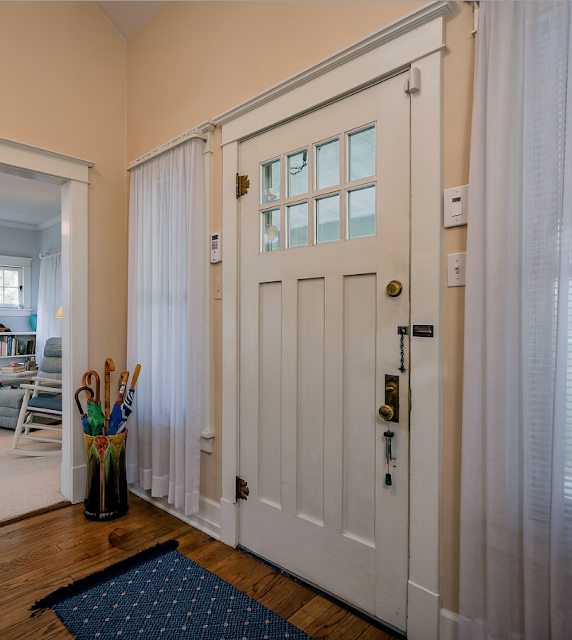 We also see this hinge, in a smaller size, on the little square windows above and to the sides of the fireplace in the living room:

Additionally, in the light-blue, first-floor bedroom that now has the piano in it, with beautiful wood floors, we see the Sears five-panel interior door, with another hinge that was offered by Sears in the early years (though this design, unlike the first hinge shown, above, was also used by other companies): 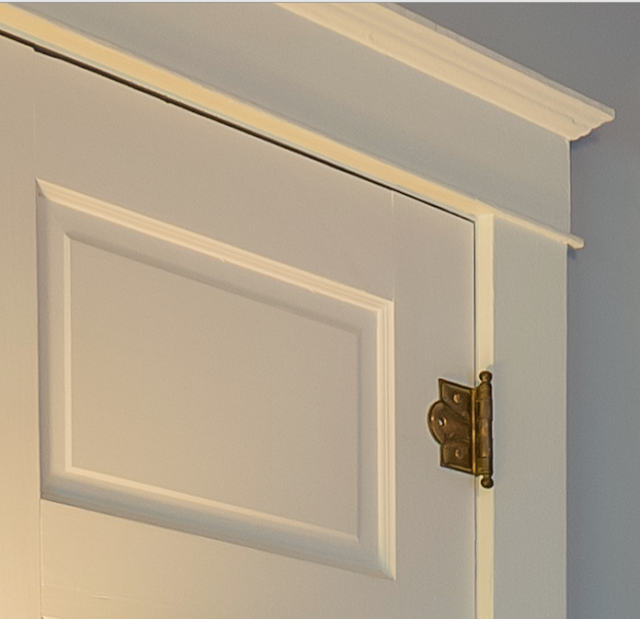 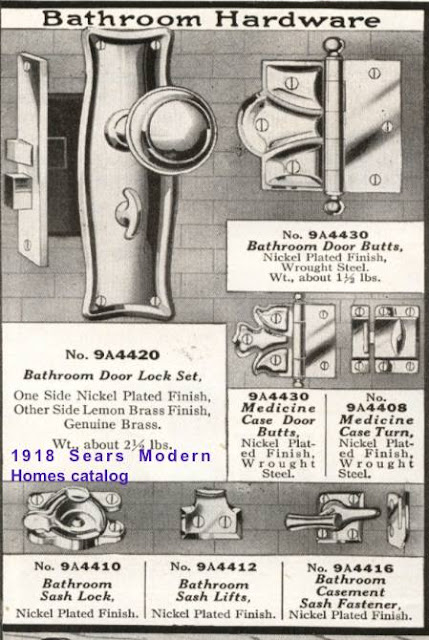 To give you an idea of the lush setting of this house, take a look at this 2015 Google maps Streetview image:

If you're interested in seeing another Sears Elsmore in the St. Louis area, I've written previously about this authenticated Elsmore in Overland, Missouri (St. Louis County).

I'm sure that this house won't last long on the market. I just hope it doesn't fall the way of so many historic Kirkwood homes that go up for sale lately... particularly if they are on a large lot, as this one is... they are bought by a developer, scraped, and some unsightly, huge, vinyl-clad McMansion goes up in its place. Heaven forbid that this happens to the wonderful House That Thrift Built!
Posted by SearsHouseSeeker at Friday, October 04, 2019