Though we have literally hundreds of Sears Gladstones and Sears Langstons on our national database of Sears houses in the U.S., we have only some Gladstones with the B floor plan-- the new option beginning in 1930. And, until this Pittsburgh Gladstone-B went up for sale, I don't think that we had really seen the interior of a home with that B floorplan. So, this is a real treat! And, it will help us identify other homes that we suspect may be Gladstones... especially when they have had their front porch enclosed, like this one.

The current owners got in touch with us on our Sears Modern Homes FaceBook page, after seeing a great 2017 newspaper article by Stephanie Ritenbaugh, in the Pittsburgh Post-Gazette. It featured our friend and fellow researcher, Karen DeJeet, who lives in a Sears Hamilton in Pittsburgh. Lots of people commented on the newspaper's FaceBook listing of the article, and I, in my role as admin of the Sears Modern Homes FB page, had been commenting back and forth with the folks who were telling us about Sears houses that they knew.

Daniel Luttner then contacted us on our FB page, to tell us about his house. They had learned, from  neighbors, about the history of the original owners offloading the building supplies for the kit, after having picked up their shipments at the train depot, and hauling them back to their lot on Homer Avenue. Because the front porch had, since then, been half enclosed, Daniel and his wife had had some trouble figuring out for certain what model their house might be. And, of course, there's always the possibility that a suspected kit house is from a different company... but, in our discussions, Daniel Luttner and I came to realize that their house was a reverse-floorplan Gladstone with the plan B layout.

One of the key details that helped us know for sure that this was a Sears kit, was the discovery that the door handle hardware on all of the interior doors, is the Sears La Tosca door handle... we've never seen that door hardware offered by any other company.

When we find La Tosca in a house, we know that the building supplies were from Sears... and, if the house itself also matches the look and layout of one of the houses in the Sears Modern Homes catalogs (which is usually the case), then we know that the house was a kit from Sears. Ideally, we'd like to also find blueprints, or a record of a mortgage through Sears, or stamped lumber showing that the house was a kit, but we usually don't find those things, and we don't have that with the Luttners' Gladstone. Still, we're confident it is a Sears kit house!

Finding Marked Lumber In A Sears Kit House
One of the most likely spots to find marked lumber, is on exposed joists visible in the basement, but this house has a nicely finished basement, so the lumber is no longer exposed (and, even when the lumber is not covered over, sometimes the markings have simply faded over time). Sometimes, during renovations, folks find marks on the back of staircases, or on the ends of wood pieces long hidden by plaster or plasterboard walls. In this 2017 blog post of mine, about a Sears Winona in Affton, Missouri, I discussed how and why Sears marked the lumber in their kits, and showed where I found just two marked pieces in that house... very faded. Here's one of the photos I showed, followed by two nice, dark stamps found in a Sears Hamilton in Novi, Michigan (that home, owned by researchers Andrew and Wendy Mutch, was the subject of this great little NBC Nightly News segment in 2017!)


The Layout Of The Gladstone-B
Getting back to the Luttners' Gladstone in Pittsburgh, let's first look at the floorplans for this model.

Here's what the 1932 Sears Modern Homes catalog shows-- I've indicated the Plan-B floorplan:
What's interesting, though, is that, when this new floorplan was introduced, in the 1930 catalog, Sears referred to it as the B floorplan, in the text of the catalog page for this model. However, when labeling the floorplan images, they mistakenly labeled the new B floorplan as the A floorplan!:
Back in 2015, I did an extensive blog post about the Sears Langston vs the Sears Gladstone. The Langston was the original name of this model, when it was introduced in 1916. In 1925, the name was changed to Gladstone, and in 1930, the Gladstone was offered with the optional B floorplan. The model was modified again in the late years of the Sears Modern Homes era, with a re-working of the look, in the 1938 catalog. Here's a quick synopsis, but the blog post explains more and shows images:
The Gladstone-B At 1026 Homer Avenue, has the reverse floorplan from what is shown in the catalog. This was something that Sears advertised that they were happy to do for their customers, and we see this quite often, for all models.
Let's start by looking at the entry vestibule and staircase location on this floorplan. Take a look at the floorplan above... this is the area in the front of the house, over to the right. The floorplan shows that there is a window at the base of the stairs, on the side, and that that there is a closet at that first landing of the staircase. And, you can just see the vestibule, to the right, in the photo below:


Here's one of the only other Gladstone-B examples that we have on our national database list. This house in White Plains, New York, shows what the original porch looks like for this model, with those Gladstone-era porch columns (they were different in the Langston era), and we can see the set of three windows:

The original Gladstone-A / Langston floorplan does not have that additional side entry. Here's that side of the house on an authenticated 1925 Gladstone-A that I located through mortgage records:

On the original layout (floorplan-A), the staircase is accessed from a wall in the back of the living room, with a closet next to it, as you see in these examples:

As you can see with the original layout of the Langston and Gladstone, the front porch shows not a triple bank of windows, but a single window, and then a pair of windows. Here is how that looks, as seen on the Gladstone-A in Croton-On-Hudson, NY:
Let's look at the rest of the real estate listing's beautiful photos for our Gladstone-B model on Homer Avenue: 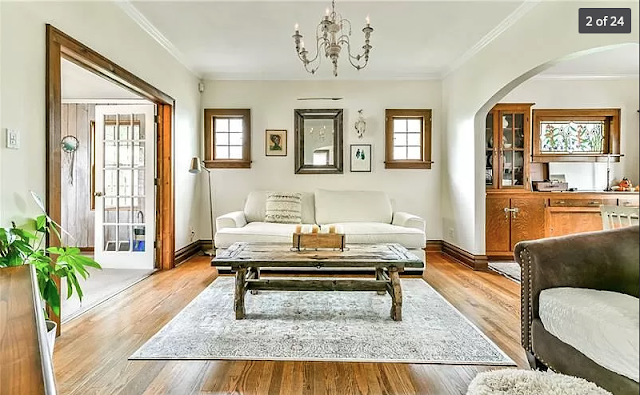 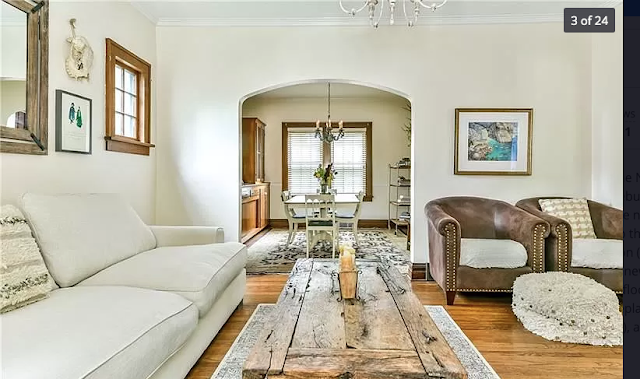 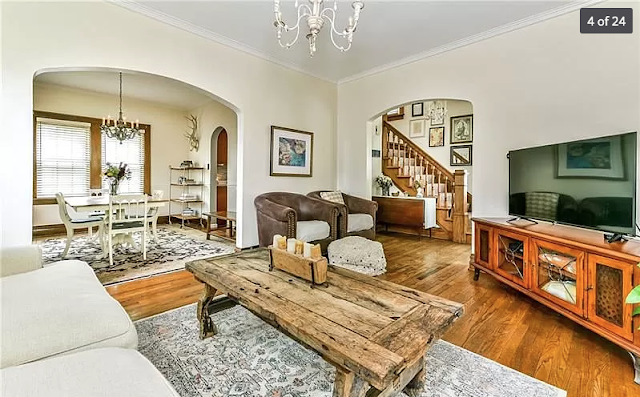 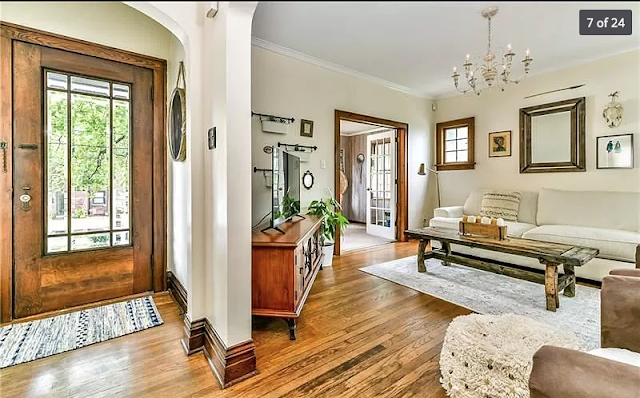 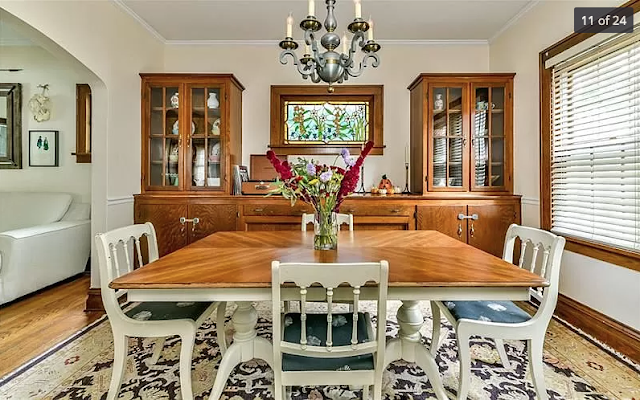 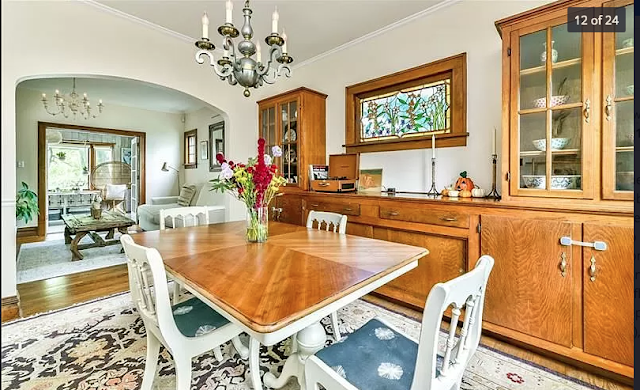 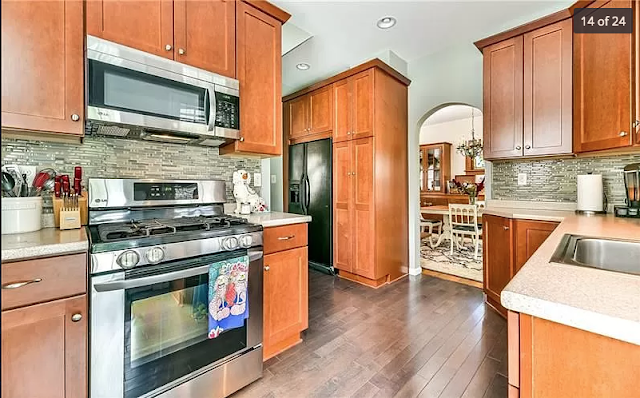 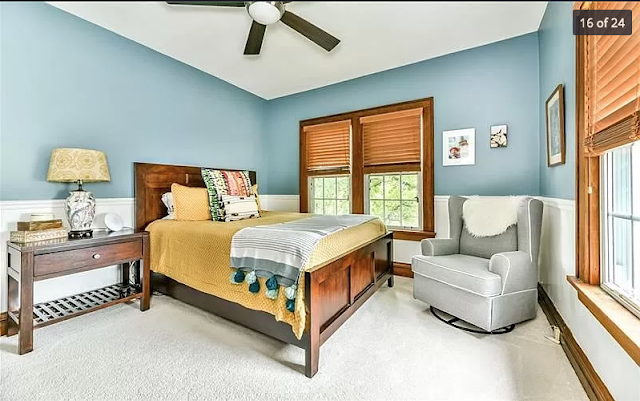 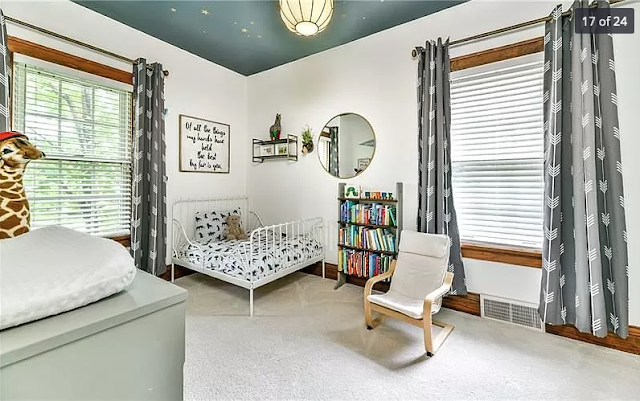 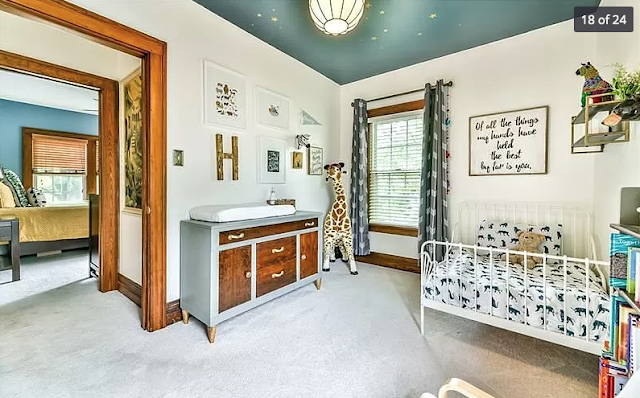 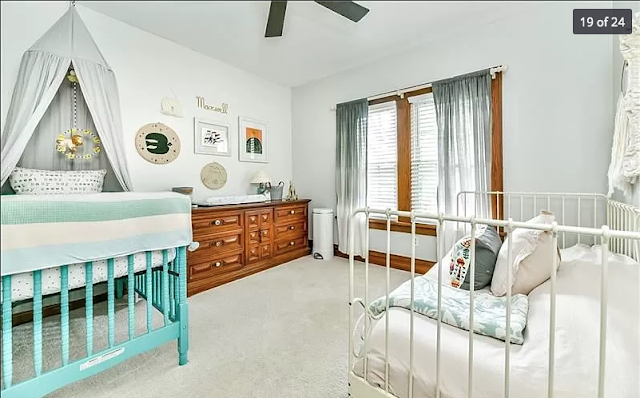 From The Catalogs
I always love to be able to show where the various elements of our houses are shown in the original catalogs--either the Sears Modern Homes Honor Bilt catalogs, showing mostly the models, or in the Sears Building Supplies catalogs. Here are a few aspects of the Homer Avenue Gladstone, as shown in the catalogs. These catalog images are all from my own 1930 Sears Building supplies catalog, but should all be visible in this online 1930 Building Supplies catalog (a different version than I have), or in others that I have links for here on this page of my blog.

I have thoroughly enjoyed learning more about the layout of the Gladstone plan-B model. What a great house this is, in fantastic condition. I know that the Luttners have enjoyed it, and now it's time for a new family to settle in. I hope they'll be as excited as we are about the piece of Americana that they are buying, and will respect and love the history of this home.
Posted by SearsHouseSeeker at Sunday, October 20, 2019