Gordon-Van Tine No. 121: Testimonial House of A. L. Yearous

This is the home of Allben L. Yearous and his wife, Annah.  They had their house built in 1910, having bought the plans and supplies as a standard-cut kit from the Gordon-Van Tine company.  After having their home built, Allben Yearous sent in a photo to the Gordon-Van Tine company, with a little "testimonial" note:
The Yearous home was a No. 121, sold before the years of plan-cut (cut-to-size boards), so all of the framing boards would have been sent in standard lengths, still needing to be cut to fit the construction of the house.  Allben refers to "a few minor changes", but mostly all that we can see here is the big window-box bump-out up in what is the biggest bedroom upstairs, right in the center of the upper floor.  The bay-window bump-out you see on the Yearous home is actually a standard part of the design, but Allben and Annah chose to do a reverse floor plan, so we see the dining room side of the house from this angle, but the catalog is showing the kitchen side of the house.

Here's the cover of the 1916 Gordon-Van Tine Standard Homes catalog:
Let's take a look at the floor plans, so you can see what I mean.


Here, on the first floor, the usual plans call for the dining room, with its bay window, to be on the right side of the house, and the kitchen, with its double windows, is on the left. The kitchen windows are visible in the catalog image of the house, with the side entry door in the center.  That's on the other side of the Yearous house.
Here, on the Yearous house, we can see that they also chose to separate those two kitchen windows -- easily done when your boards aren't already cut-to-fit (Sears used that term, GVT called their kits, "ready-cut", and later used the term,"plan cut"). Obviously, now, as well, the front porch has been enclosed.
I messaged the great-grand-daughter of Allben and Annah Yearous, and she graciously shared a couple of early photos of her grandparents' home in Eagle Grove. That appears to be Mrs. Yearous, standing out in front of the house:
Here's another view, this time with more family members sitting outstide... and the front porch enclosed with screens:
Here we see the second floor... three good-size bedrooms with closets, a simple bathroom, and a nice size entry hall.  I'll bet most folks these days would add on another few feet to that bathroom, and make that entry hall smaller... and then they'd have to re-arrange the entry doors to those two back bedrooms... but, surely, that could be done!
Here's the full ad in the 1916 Gordon-Van Tine Standard Homes catalog, showing two other testimonial homes, as well:

Allben Yearous and Annah Belle Gregor were married on March 14, 1888, when he was 24, and she was 22. Their son Jesse came along in February of the next year. The family lived until 1910 on Wright Avenue, in Eagle Grove, but moved into their new, Gordon-Van Tine home some time that year.

Allben Yearous had his own sporting goods company.  The 1930 census shows Allben and Annah, and mentioned the Sporting Goods store under occupation for Allben.

The earlier 1900 census, before the Yearous family moved to their new home on S. Commercial Avenue, showed their young son Jesse living with them -- odd that they would have had this big house made ten years later, when surely Jesse, at age 21, would soon move out? In fact, Jesse didn't marry until 1913, so I imagine that he did live for a few years in the new house.


Allben and Annah lived together in their Gordon-Van Tine No. 121 until 1933, when Allben died, at home. 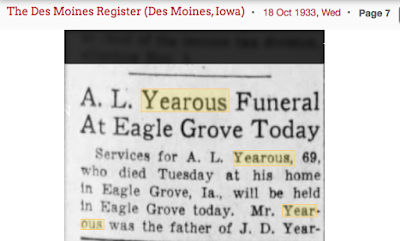 Annah, the former Annah Belle Gregor, was still living in the house in 1940, according to the U. S. Census of that year, and died four years later.  Thanks to the Grimson/Barrett family tree (by Ancestry member Sherrie70), we have images of the grave markers of both Annah and Allben, and this link takes you to the Find A Grave website listing for Allben, with links to Annah and many other members of the Yearous family. 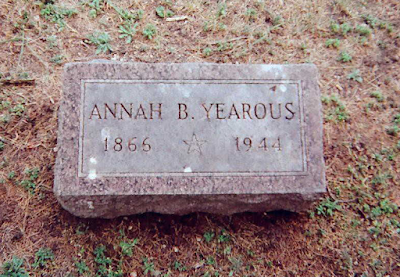 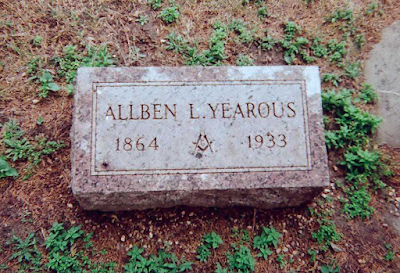 To see blueprints for an authenticated Gordon-Van Tine model No. 140, in New York State,  you can read this previous blog post of mine.

To learn about the Gordon-Van Tine lumber mill in St. Louis, you can read this previous blog post of mine (that info is near the end of the blog post, which features a GVT Glencoe house in St. Louis.)
Posted by SearsHouseSeeker at Monday, July 03, 2017