I believe that it was researcher Lara Solonickne, of our kit-home research group, who first ran across a 1993 newspaper article about this Sears Sunbeam in Orlando, Florida, and added it to our national database of Sears homes. The article ran in the Orlando Sentinel, on February 13, 1993, and told of the history of the family who bought this house, and lived there through the 1990s: Robert and Kate Brown, and their children Charles and Dorothy.  I was researching the Sunbeam a bit the other day, and ran across this sale listing for the house, on Trulia. So, I thought I'd show off its beautiful interior in a blog post. All but this next photo of the house, are from that Trulia listing.

History of the Sunbeam and the Elmwood
The Sunbeam was a 1920s model offered by Sears, recognized immediately by its four big front columns, squared off and tapered down from the top, and its wide shed-roof front dormer, perfect for the sleeping porch it housed.  This is a great house for Florida, I would imagine. A little further down, here, you'll see a photo of the bedroom that the sleeping porch dormer opens off from.  It was used as a children's bedroom by the most recent owners.

Before 1922, this model was known as the Elmwood.  It had an open sleeping porch up in that dormer, whereas the 1922 through 1925 catalog images of the Sunbeam show that as an enclosed dormer, with lots of window area.  There is also a very slight difference on the first floor:  the Elmwood had a little back porch off of the kitchen, and a back door from the back wall of the kitchen, led to that porch.  The Sunbeam's design did away with that little porch, and placed the back door at the base of the staircase in the center of the back of the house, where it lead to the basement. The blue arrows on the catalog images below, point out that difference.
Here is the 1921 Elmwood's first-floor plan:
And, here is the 1925 Sunbeam's first-floor plan:

The back door placement is the most obvious detail in the back, but you can also see that, if you get to see the interior of the house (and the kitchen hasn't been all re-done), you can note that the entry to the kitchen is different, too. Both have an entry from the dining room, but, for the Elmwood, that was the only interior entry. The other doorway just goes outside. The Sunbeam, however, has that entry into the refrigerator's nook, that leads to the stairs that go to the landing where the back door is, and to the basement.

Another difference between the Elmwood and the Sunbeam, pointed out to us by researcher friend Karen DeJeet, is the placement of the heating system's vent chimney (not the big fireplace chimney-- that's on the other side of the house), shown here (below) on the left side of the house, off of the kitchen. In the catalog floor plan, above, the red arrow points out that the chimney is placed on the exterior of the house, outside the wall of the kitchen. But, in the Elmwood's floor plan, that vent chimney is placed inside the wall of the kitchen (as pointed out with a red arrow on the Elmwood's catalog floor plan, above), so that vent chimney is not visible from the exterior of the house, as it is if the house was built during the Sunbeam years (1922 and after).
The Elmwood / Sunbeam was a popular model for Sears, but it's hard for researchers to identify "in the wild", without interior views. Why? Because there is at least one almost-exact lookalike--- from the exterior. The Radford company, a very well-known plan-book company of the early part of the 1900s (plans only, not any building supplies), offered the Barnard, shown below:

If we take a look at the interior layout of Radford's Barnard (below), we see that the heating vent chimney is again not visible from the outside, because it is placed well into the interior of the house, along an interior kitchen wall (pointed out with the red arrow).  For researchers, this means that if we see a Sunbeam-style house out in the wild, and we see an exposed heating vent chimney, then it is most likely a Sears Sunbeam. If that vent chimney is not visible, it is either a Sears Elmwood, or a lookalike. If we can see the back of the house, however, we will know that it is probably the Radford Barnard, if we see a row of four small windows on the back, in the breakfast room (that breakfast room is mentioned, with excitement, on the catalog page above).

The glaring interior difference between the Radford Barnard and the Sears Sunbeam or Elmwood, is the placement of the stairway up to the second-floor bedrooms. The Radford Barnard has that staircase right in the center of the first floor, so you see it as soon as you walk in the front door. The Sunbeam and Elmwood have that staircase at the back wall of the living room.

And, here are the two second-floor floor plans of the Sears models, the Sunbeam (on the left), and the earlier Elmwood, on the right. The only obvious differences are the placement of the door into the bathroom, and the location of the heating vent chimney:

The Orlando Sears Sunbeam
Let's take a look at the Brown family's Sears Sunbeam, as shown in recent real estate listings:
In the living room, we see two other things that point to the provenance of this home: the colonial staircase newell (blue arrow) is shown in the Sears building supplies catalog; and we have the presence of two plinth blocks (red arrows), used to connect sections of baseboard trim.  Normally, plinth blocks are used in carpentry at the base of door trim molding, but Sears offered the plinth blocks as a way to easily join two pieces of floor molding that were at angles, or were different sizes. It made for a neat-looking transition, and was easier for someone who wasn't a carpenter, to connect pieces of molding.

You can see the use of plinth blocks shown on two other authenticated homes, in previous blog posts: this one, about an Americus in Pittsburgh; and this one, about a Brookwood in St. Louis. 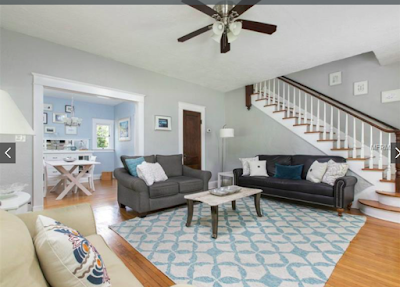 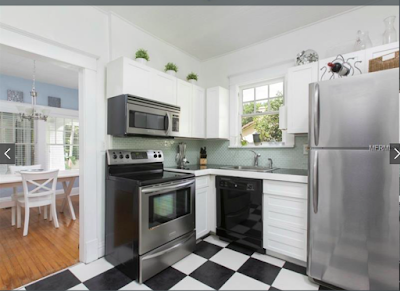 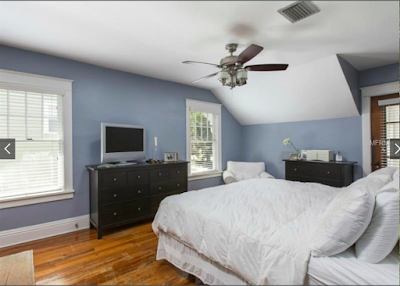 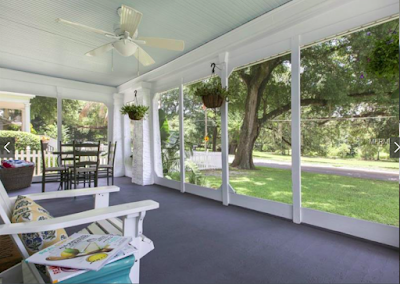 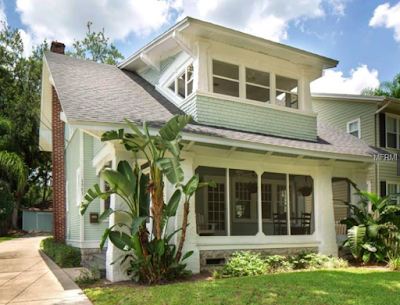 The Brown Family
The couple who built the Orlando Sunbeam in 1925/26, were Robert S. Brown, and his wife Kate. Robert worked "on his own accord" as an upholsterer (according to the 1930 and 1940 census), and Kate raised their two children, Charles and Dorothy.

The 1930 census tells us that both Robert and Kate were born in England, in the early 1880s, and both emigrated to the United States in 1906.  They must have been married about three or four years later, as the census tells us that they were 26 and 27 when they married.