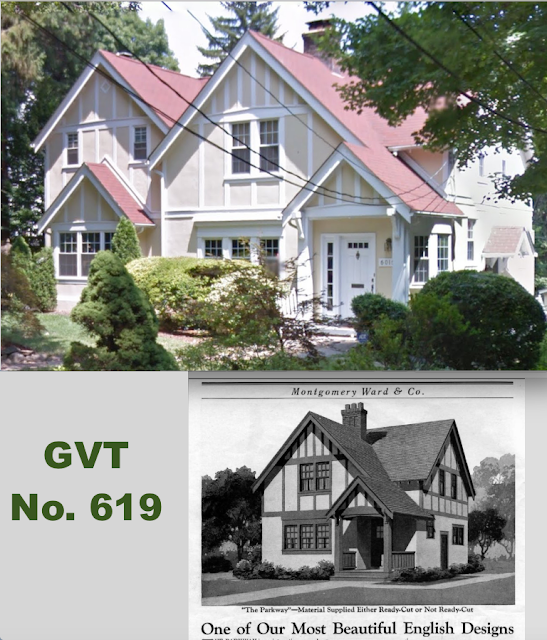 The original floor plan would have looked like this, so the house section on the right, of our 33rd Street house, should have something like this:

An Authenticated House
I learned about this house thanks to a building permit, and that, of course, authenticates it as a GVT. It's pretty rare to have anything to authenticate a GVT house (though I recently wrote about one that had a set of blueprints, sent to me by the current owner), so having Gordon-Van Tine listed on the permit as both the architect and builder (they may have arranged the contractor for the buyer) was pretty exciting to see.

The buyer was John Hinton Crabtree, with his bride of only 4 years, Katherine. They were married in 1921, and John was working for the Federal Government as an accountant, I believe... at least he was, in 1920, according to the 1920 census.  By 1930, the census had him living in Yonkers, New York (so soon after building his house in DC!), working as a real estate broker,  but, in 1940 (still in Yonkers, though in yet another house), he was listed as an attorney for the Federal Trade Commission.  I wonder if he didn't perhaps maintain two residences?

John's WWII draft registration card (though he must have been in his 50s already, I guess you had to register), shows him living in Yonkers, but gives his office in DC, in the House Office Building, as his mailing address.

This house was definitely ordered from Gordon-Van Tine, because we see that on the building permit. However, Gordon-Van Tine was also a lumber mill (they were part of a conglomerate that included the U. N. Roberts lumber company, and they had several mills around the country, producing their pre-cut homes), and they were used by Montgomery Ward to produce their Wardway homes.

Apparently, Gordon-Van Tine and Wardway had an agreement allowing them both to market the same homes (different names, exactly the same house) at the same time, so, in the year that we see this house, the No. 619, offered in the GVT catalog, it was also offered by Montgomery Ward, in their Wardway Homes catalog, as the Parkway.

Whew! I guess I've written quite a bit about Gordon-Van Tine homes over the last couple of years. I didn't realize there was so much. If you're interested simply in more background on Gordon-Van Tine, in general, go to Dale Wolicki's website, GordonVanTine.com, where you can read about Dale's interesting research, and see a number of GVT houses he has found over the years.
Posted by SearsHouseSeeker at Sunday, January 15, 2017