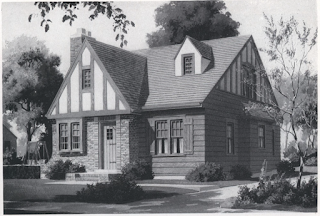 Today, I have three kit homes to show. This all started with this Gordon-Van Tine Sharon, in Fort Madison, Iowa.  I was just about to throw together a quick blog post about this authenticated GVT model that I found thanks to a mention of a real estate transfer, in an issue of the 1935 Des Moines Register, when I noticed that the house across the street looked to be a Gordon-Van Tine Hudson ! So, I thought I had better look around the neighborhood, and right down the street, I found what looks to be a Sears Strathmore. The catalog image to the right, is the Sharon as shown in the 1936 Gordon-Van Tine Book of Homes.   I was unfamiliar with the Sharon, but I know now, that it was first offered in the 1932 catalog, and appeared in the 1935 and 1936 catalogs, under the same name (1932 appears to be the year when Gordon-Van Tine changed the name of every house in their catalogs).

The Sharon model was offered as a one-floor, two-bedroom plan, or with a half story addition, containing two more bedrooms (Sharon B ).  The Lee County Iowa assessor's page for this house, describes it as having four bedrooms, so it looks like the Nobles opted for plan B.

Dr. Harold F. Noble lived here with his wife, Frances, and their son, Harold D., and daughter Jeanette.  Harold Noble was only 32 when he bought this house.

The Nobles chose the reverse floor plan from what is shown in the catalog (GVT, like Sears, was happy to offer this option at no extra cost), so this last image (below), shows the side you don't see in the catalog image of the house.  I looks like they may have gotten a GVT garage at the same time!

Gordon-Van Tine Hudson
As you can see from the snippet from the 1940 census, above, across the street from the Nobles, at 1236 Avenue B, Fort Madison, Iowa, lived the Wallis family: father Frank, mother Marie, son Frank, Jr., and daughter Carole.  The 1930 census puts them at this address, as does the 1931 City Directory, and the 1929 city directory has them elsewhere in town, and has no listing for a house yet at this address, so we can surmise that they are the first residents of the house.  The county assessor's records give a build date of 1929 for the house, so that fits in nicely, and must be accurate.  Their home looks to be a wonderfully kept-up Gordon-Van Tine Hudson:
The Hudson should have four windows in the long side dormer, and our house does (by comparison, the smaller GVT Braddock has only 3 windows in that dormer).  We often see that side porch enclosed, as it is on the Fort Madison house. 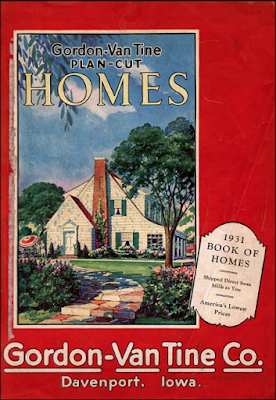 The GVT Hudson has a TON of lookalikes.  This style house, in all kinds of variations, was offered by just about every U. S. kit company and plan-book company known to man in the late 1920s and 1930s (to see a Sears Cedars, for example, along with a long list of competing lookalikes by other companies, check out this blog post of mine).  Some have a chimney in front, and some don't. Obviously, the Hudson does, so that narrows things down.

The Chimney and the Front Upper Window
If you see a front-chimney house of this style, the first thing to look at is the space on either side of the chimney... is there just one window there on the second floor, or is there a pair of windows, one on either side of the chimney? THAT is the first distinguishing feature of the two GVT models of this style: there is only ONE upper window on the front elevation.  Here is our Fort Madison house, as shown on the county assessor's page. Thank heavens they had a shot of the house without all of that foliage surrounding the chimney. Clearly, there is only one window!
A very common lookalike to the GVT Hudson, is the 1926 C.L. Bowes Ankerton (offered in 1928 as the Home Builders Chenee).  On first glance at the front, they look like the same house. But, the Ankerton/Chenee has a little extra window up there to the left of the chimney:
Upon any kind of closer inspection, you'll note a number of other differences, but when you've just come across a house that you think might be the GVT Hudson, the window issue is the first thing to look for.

Another issue to notice, is the shape of the chimney.  Both the GVT Hudson (and the smaller Braddock), have a straight-sided, evenly-tapering chimney, with no bends or bottle shape (for lack of a better term).  This is helpful to distinguish it from the one lookalike that I know of that ALSO has only one window up there on the second floor: the CL Bowes Camanche (later known as the Home Builders Devore).  Notice that the Camanche/Devore has a sort of bottle shape to the chimney, so the tapering effect is different than on the GVT house.
Gordon-VanTine Interior
From the realtor photos, we can see that the house at 1236 Avenue B has the layout of the Hudson's floor plan.  Notice, in this first double-image photo, how the fireplace and entry door and window fall just as they should, and,  though you can't see it in this first photo, the staircase is just there where it's indicated in this interior photo that is shown with this house, beginning with the 1932 catalog.


GVT Hudson = GVT Columbia
The links I included above, for the 1936 catalog, will not actually take you to a catalog page for the Hudson... they take you to the catalog page for the Columbia.  That's because, beginning in 1932, all of the GVT homes had their names changed (except, of course, for those introduced that year, like the Sharon ).  The Hudson, became the Columbia:
GVT Braddock = GVT Raleigh
And, the smaller, slightly different GVT Braddock, had its name changed to the Raleigh, beginning in 1932:
Colorful Gordon-Van Tine Kitchens and Baths
The 1929-31 Gordon-Van Tine catalogs featured color pages showing off the beautiful color schemes GVT designers had planned for you, especially for your kitchens and baths (all of these images are from Daily Bungalow's online Flickr album of the GVT 1929-1930 catalog, available here):

Sears Strathmore
And, finally, hidden away behind foliage that makes it hard to see this house well, down the street, at 1335 Avenue B, is what definitely looks to be a Sears Strathmore:

The only differences we see, are:
1-- The very small front window on the left elevation, which was for the front lavatory, is missing
2-- The side entry door is gone, making for a larger kitchen window.
3-- The Fort Madison house has a built-in, below-level garage.  My guess is that, with entry available through the garage (and no real space left to put a side porch for a side entry), the side door was eliminated. 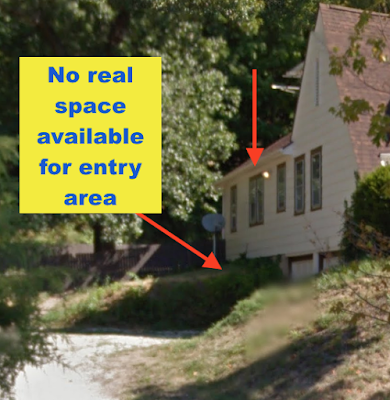 Sheaffer Pen and Pencil Company
One thing I learned from researching for this blog post, is that the famous Sheaffer Pen Company was begun in Fort Madison, Iowa, and remained there in full force until 2006, when its parent company, BIC, closed down the Fort Madison plant.  Both Frank Wallis (resident of the GVT Hudson ), and Howard Wright (resident of the Sears Strathmore ), worked for Sheaffer Pen Company in the early 1930s.


And, here is Howard Wright, in 1931, before moving to his Sears Strathmore, and opening his own car dealership:

Sheaffer Pen Company was begun by Iowan Walter Sheaffer, who developed and patented the system of a refillable fountain pen with a lever, in the 19-teens.  This invention was enormously popular, and led to a new standard in fountain pens around the world.  Sheaffer's main plant was in Fort Madison, Iowa, where he lived.

The University of Iowa's Biographical Dictionary of Iowa has a very informative page about the development of the pens and mechanical pencils we have all come to know, that were first developed by Walter Sheaffer, and marketed at Sheaffer Pen and Pencil Company:

Posted by SearsHouseSeeker at Monday, February 27, 2017