This sweet little hip-roof bungalow with an inset, gabled front porch and partially bay-shaped front rooms, is, I believe, a Harris Homes model No. 1007.
Harris Homes was a kit-house company in the early 1900s, offering blueprints along with the option of pre-cut packages of all of the lumber and building needs for your house -- just like Sears and Gordon-Van Tine and Aladdin and Montgomery Ward's Wardway Homes. Harris Homes was based out of Chicago, and began their life in the late 1800s, as Chicago House Wrecking Company. According to noted researcher Rebecca L. Hunter, they began as a company that helped in dismantling the structures at the 1893 Chicago World's fair, as well as the 1904 St. Louis World's Fair.  You can read a bit more about the company here, on the Arts & Crafts Society page about Harris Homes.

The earliest catalogs list the houses with just a model number, but then (probably beginning with when they transitioned to the name Harris Homes, after 1913) they seem to have begun adding a letter to start the model number.  It looks like the catalogs moved along alphabetically as the years went on, so, this house, in a very early Harris Homes catalog, is shown as No. B-1007, and I have photos for it listed, in 1918, as No. L-1007 and, in 1920, as M-1007... you get the idea :).

In the early, B-year catalog (sorry, I don't know where I got this image), the page shows a small photo of an actual-build No. B-1007, and, when you put it next to this Grove City, PA house, you can see how similar they are.

Apparently, this Harris model was shown at the Iowa State Fair in Des Moines ("and other big expositions"), and I love the way they refer to its simplicity of style, by pointing out that it has "no freakish projections" --- haaaa haaaa!
Let's take a look at a few more views of our Liberty Street Harris No. 1007, in Grove City, PA (all views of this house are thanks to Google Maps street view): 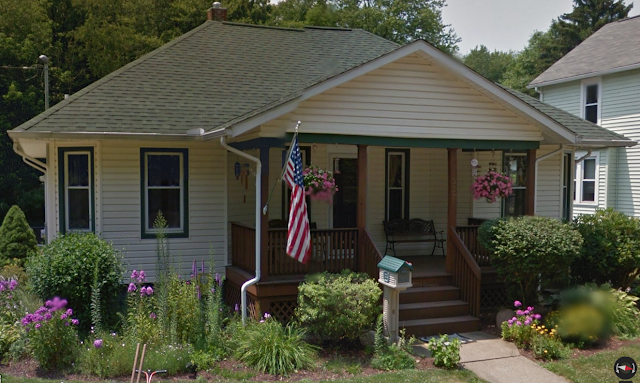 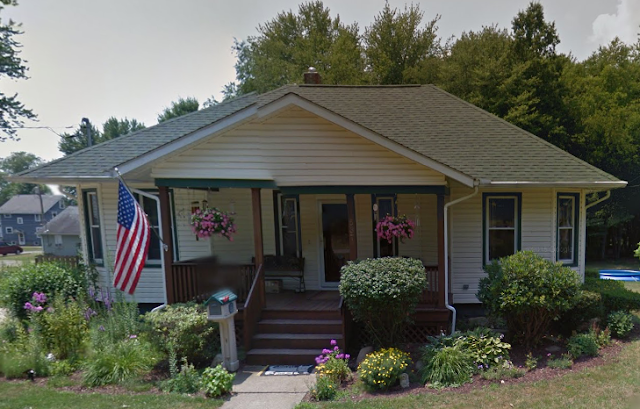 Posted by SearsHouseSeeker at Saturday, July 23, 2016