Earlier this year, I did a bit of research to find authenticated Sears houses in the Pittsburgh, Pennsylvania area.  Thanks to our researcher friend Karen DeJeet, who lives in a Sears Hamilton in Pittsburgh, we've seen that the greater Pittsburgh area is just dotted with Sears homes in many neighborhoods.  Previously, I've written about two authenticated Sears Bandon models, and a really cute Sears Windsor that Karen found in a Pittsburgh neighborhood. Today, let me show you two authenticated Americus models, both found through mortgage records.

First, we have a 1923 Sears Americus on Parklyn Street in the Overbrook section of Pittsburgh, shown above.  This house was bought by Ira L. Spear and his wife, Ivy, through a $4,300 mortgage signed-off on by Sears trustee William C. Reed. They lived here with their son, Robert.
According to the census and to numerous newspaper articles through the 1940s, Ira Spear was a teacher, a counselor, and an administrator, who was also a very active leader in the Boy Scouts.  He worked for a long while at the Connelly School in Pittsburgh, a vocational school at that time.

Sitting at 557 Shelborne Avenue, in the Wilkinsburg area of Pittsburgh, is the Americus model that was bought by George Buckingham, and his wife Clara, in 1922. They, too, signed off on a $4,600 mortgage through Sears trustee William C. Reed.


George Buckingham was 51, and Clara 43, when they bought their Americus.  Previously, they had been renting. They had three children, Clarice, Robert, and Grace, and George was a foreman at a cement plant.  Though Clara was born in Indiana, George was born in England, having immigrated to the U.S. in 1891.
As with so many homes in Pittsburgh, the Buckingham's Americus is largely brick (veneer), and has the added change of an enclosed porch on one side of the first floor. The upper floor of the house appears to be wood shingle on all sides of the house. Sears did not ship the brick veneer to their clients, instead, they contacted a local supplier to have the brick made available through them.  Sears never sold their house kits with solid brick, but they did employ their own architects to help clients design homes made of solid brick, and arranged a local contractor to help with the construction.  In those cases, it seems that Sears acted more as an all-around contractor, designer, and supplier of the rest of the needs for construction of the house. (Source: Sears newspaper ads in the early 1930s). 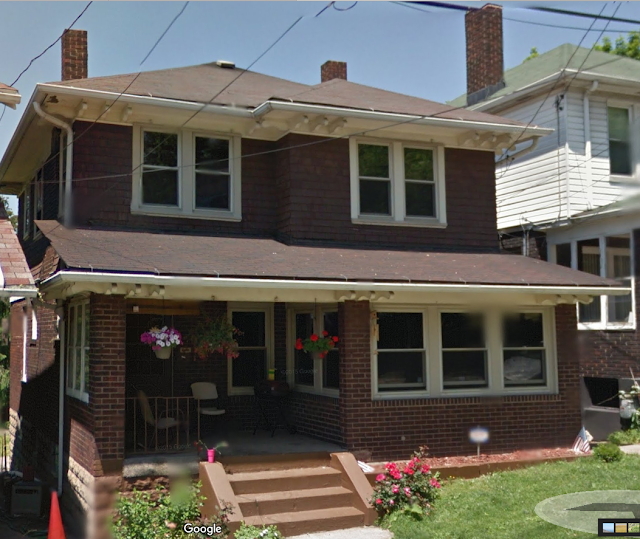 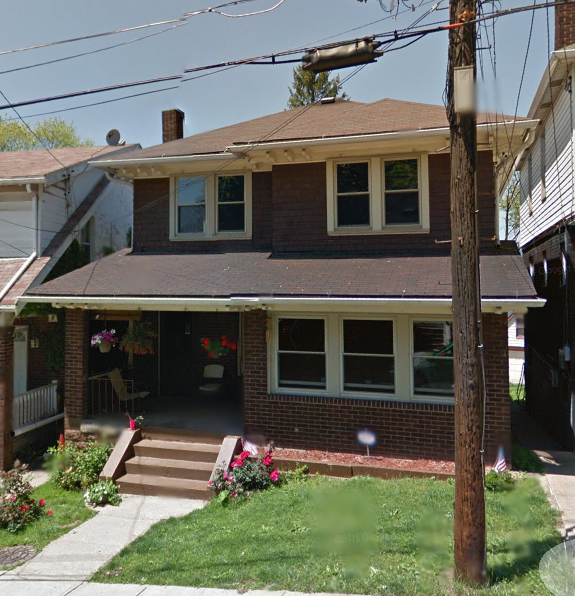 
• To read about another authenticated Sears Americus in Pittsburgh, see this previous blog post of mine; and this one about an Americus in Collingswood, N.J. (that also has the stone veneer on the porch).

• To read about a stucco Sears Americus in the Chicago area of Wheaton, Illinois, see this Sears Homes of Chicagoland blog post.

• To read about a thoroughly documented Sears Americus, in Lafayette, Indiana (blueprints and everything!), check out this blog post on Sears Homes of Chicagoland.

• Check out these blog posts at the blog, Kit House Hunters, to see Americus models in Washington, D.C. ; Massapequa, NY; and another in Massapequa, N.Y.

Posted by SearsHouseSeeker at Sunday, July 31, 2016