Oh my heavens! Last week, thanks to an Instagram post by @HomesOfHistory, I was treated to my first Sears No 137. Isn't this a beauty!?  I've never seen one before. This one in Mendham has the window detailing and the half-timber detailing (with a slight difference, in that the diagonal strips were left off) of the catalog image.

In the Google Streetview image above, there is a little squiggle (that happens with Streetview sometimes), making it look like there are two chimneys on this side, but it was difficult to get just this perspective... to show how the side windows, and upper bumpout, all match up nicely to the catalog image. The chimney, actually, should be jutting out of the roof of the side gambrel, but it's not, and I've decided that's okay.
According to Houses By Mail, the No 137 was first offered in 1911. I've never seen a 1910  catalog, but I can say that it's not in my 1908 catalog, and it is in my Schiffer re-print 1912 catalog, so 1911 sounds right (actually, this catalog may have been published in 1911 -- there is no publishers date on the version that is uploaded on Archive.org, here, but they list it as 1911... the price is lower in this Archive version, so it may be a 1911). It was never offered as a pre-cut house, and never had a name, other than its number moniker, so the last time that we see it in a catalog, is in the late-1916 publication (thanks, Dale Haynes, for scanning and uploading that edition!).
This style of house has a Gambrel roof... in fact, it has two gambrels, so we'd call it a double gambrel or a cross gambrel style. You might be thinking, "Oh! Hey! I've seen this house before!", hold on... many companies in the early part of the 1900s, offered houses with variations of this style. Sears had several, other kit companies had a few, plan-book companies like Radford homes, had several -- I did a blog post about this one, in St. Joseph, Missouri, a few years ago, and showed a few examples of offerings from other companies, if you're interested. We usually think of them as reminiscent of what we expect to see on a barn roof.
Fortunately, this house was listed for sale a few years ago, and so we can follow along a bit, with real estate photos from that old listing. Let's start with a look at the catalog floor plan:
The room layout is pretty straightforward. Here's the upstairs, front bedroom, that has that nice bay window: 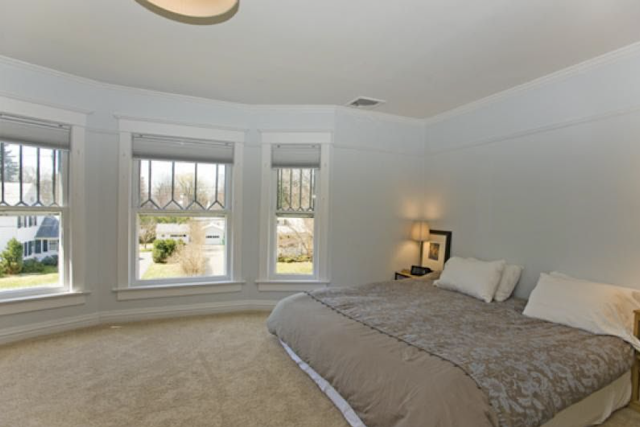 And the bedroom behind that one, has the squared-off side bumpout with the three windows... here's what that looks like: 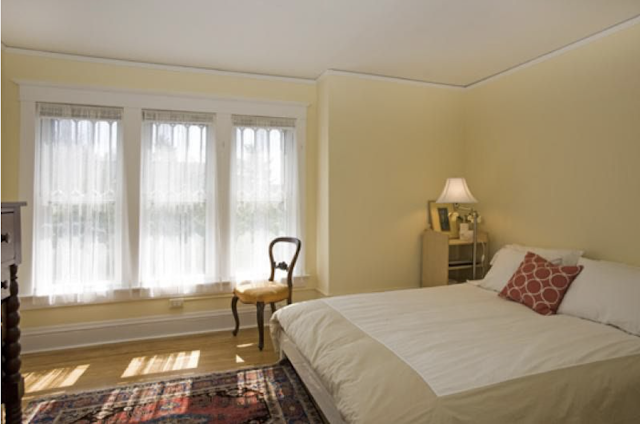 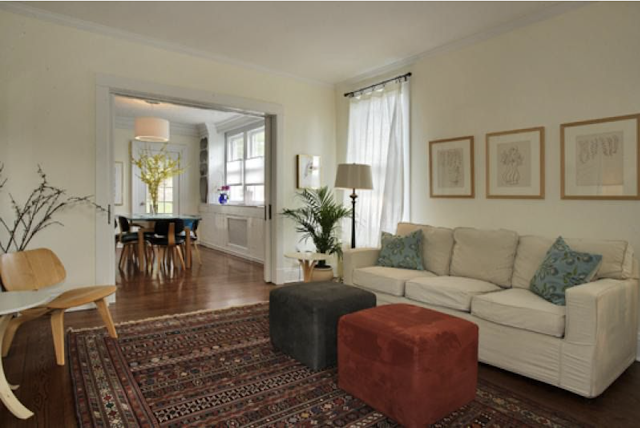 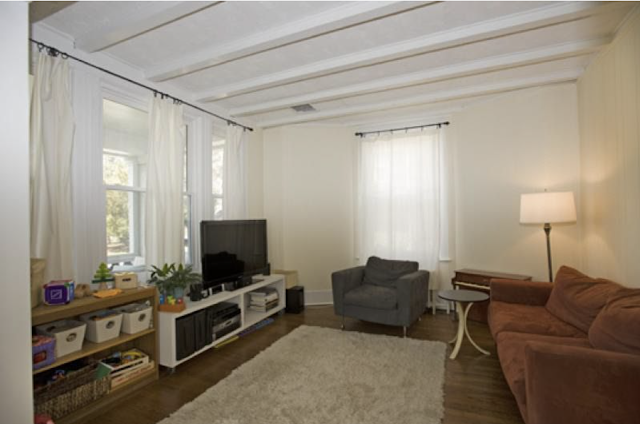 The front porch has been nicely screened in: 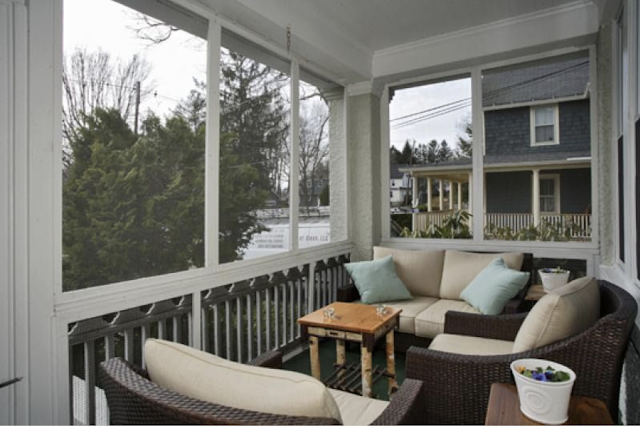 A No. 137 in Canisteo, New York
Lara Solonickne ( Sears Homes of Chicagoland ) is the researcher who added the first No 137 to our national database of Sears houses in the U.S. It's this one, in Canisteo, New York, at 40 4th Street:
This house doesn't have the half-timber effect that the catalog shows, but, Lara checked it over, to be sure that all of the windows and doors seem to be correct (the correct number, and the correct placement). This house also has an older real estate listing... the photos aren't great, but we do get to see the original colonnades and a stained-glass window. The 1911-1912 catalog listing mentions the colonnades:


Where else is there a Sears No 137?
According to Houses By Mail, this model was also built in:
And Rebecca Hunter's Putting Sears Homes On The Map book also lists:
Of course, if you happen to know of where this house might be found in one of those towns (or elsewhere!), please let me know! Remember... there are many similar houses... we'd expect to see all of the windows and doors and pop-outs to be in the same spots as this house, on the sides, and in the front.
What's that next door??
Now, when I found out the address of this house, I found out that there is another Sears house right next door: a Sears Uriel, or the later Conway...depending on when it was built. The Uriel was not offered until 1920, so these houses were not built at the same time, and, of course, I know nothing about the story of how these two Sears houses happened to be built next to each other... but, sometimes, families bought lots next to each other, and sometimes, if one member of the family had relied on a kit from Sears, another member of the family might be inclined to do the same. So, perhaps the first residents were related? But, that's all supposition on my part. If anyone from Morris County historical society happens to have a city directory for this area, from the 1920s, perhaps, and could give me a name for one of these two houses, that would be much appreciated. Please feel free to use my contact info here on the blog, or email me at SearsHouseSeeker@gmail.com.
Here's the Uriel in its first year in the catalogs, 1920: 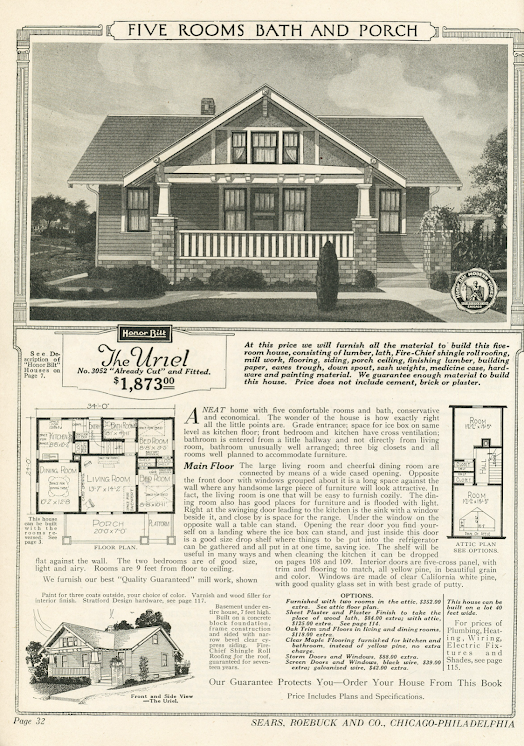 This is another of those models that has the feature of two full-sized windows flanking the front door, that I pointed out in my most recent blog post, about the Sears Norwood. Again, I was lucky enough to find a recent real estate listing to give us some photos of the house: 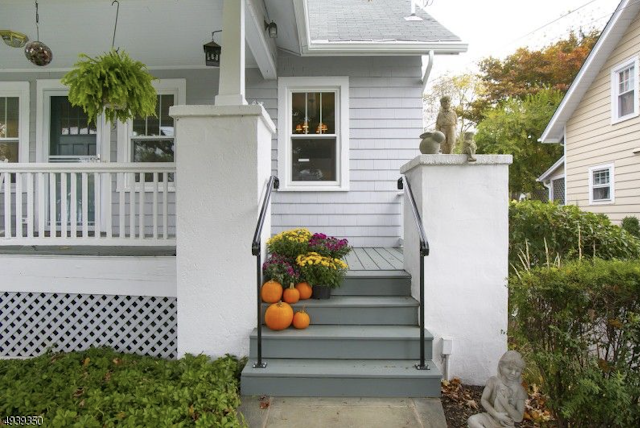 So, two splendid Sears houses next to each other, right here on Orchard Street, in Mendham, New Jersey -- more Sears houses in Morris County!  You can read about others that have been found in Morris County, here, in this previous blog post of mine.
Posted by SearsHouseSeeker at Sunday, June 27, 2021