It's 4th of July weekend, so why not feature a Sears house with a pretty flag flying, out front! This is a Sears Avoca, though, at the time that it was built, it was probably still being marketed as the No. 109. The Avoca was offered beginning in the very first year of the Sears Modern Homes program -- 1908-- and continued through the 1919 catalog. This one is in West Point, Virginia (not to be confused with West Point, New York, site of the famous U.S. Military Academy).

This house was recently in the real estate listings, but we've known about it for a while. The catalog listings sometimes mention towns where the model has been built... we call them, appropriately, "built at" locations, and West Point, Virginia is one of those locations. We can also match up a number of building elements, with items shown in the Sears Building Supplies catalogs, so, even though this house has a wrap-around porch added, on the side, we are very confident that it is a Sears house.
In 1916 catalogs, the houses were given long numerical "names", with the short number at the end, so this model No. 109, in the early 1916 catalog, was marketed as 264P109, though a late 1916 catalog we've seen, uses C to start the name, so this house is model C109 in that catalog. All of this coincides with the year -- 1916-- when pre-cut, or "already-cut" houses were introduced by Sears. However, this model was never offered as a pre-cut model.
Indoor bathroom, anyone?
And, you know what else it was never offered as? A house with an inside bathroom! I've just been looking over the floor plans from different years, to see if there were any changes made, and I do not see a bathroom! Obviously, every modern, still-standing example of this model, will have a bathroom or two, so they will have taken over that back pantry, perhaps, and maybe part of a closet and a bedroom upstairs? Not sure!

Inside the Avoca model
I have interior photos from the real estate listing for this house in West Point, Virginia, but I also have interior photos for one or two other examples of this model, so I'll include those, too. Let's take a look:
The front door leads you right into a nice little entry hall, where you find the lovely staircase, as well, and two nice big windows. This house in West Point has painted woodwork (sorry, that doesn't bother me... it might have been ordered as pine, and intended to be painted), but I also have an example for you with natural, stained woodwork.
In East Hampton, Connecticut, at 44 Colchester Ave, we have another "built at" Sears No 109, with a real estate listing for photos. This house is in a little rougher shape, in some ways, but has gorgeous original woodwork. It also has Sears Stratford door handle hardware, and trademark Sears hinges:

In Cranston, Rhode Island, at 471 Oaklawn Avenue, there sits another Sears No 109 / Avoca, and here is the look of the staircase in that house:

Here is the staircase newel, in the Sears catalog:
The door model on the West Point house, appears to be the Windsor model, but with new leaded glass. Here it is from the outside:
The front living room has that bay with three big windows, with nice Craftsman style trim. Here it is in the West Point, Virginia house: 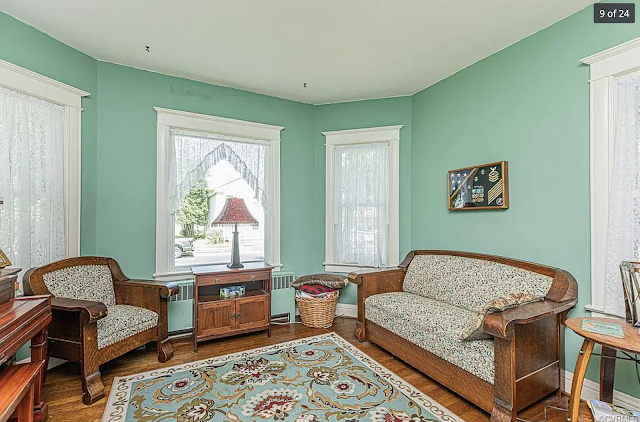 And here is that space inside the Cranston, Rhode Island house:
And, inside the East Hampton, Connecticut Avoca:
There are lots of lovely photos of the West Point, Virginia Avoca, in the real estate listing. It has an addition, besides the roomy side porch, and they clearly fitted it with a bathroom, as well:

The East Hampton, CT Avoca is the one with so much original, unpainted woodwork, and the photos from its real estate listing really show this beautifully. The floors were in need of serious restoration, but the doors and dining room sideboard and the window and doorway trim, is beautiful.

And, here is that buffet/china closet from Sears, as shown in the 1915 building supplies catalog: 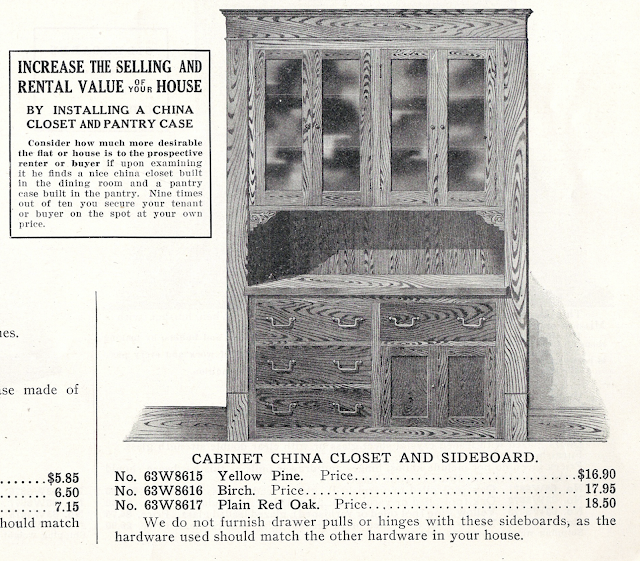 You can't see them really well, but this china closet has the only-offered-by-Sears hinge:
...as do the doors, which also have Sears Stratford door-handle hardware:

The Cranston, Rhode Island Avoca has woodwork that is of an earlier style than the Craftsman look that we see in the other two houses. This house uses square wood blocks with a circle design in the center, and a slightly-curved face to the doorway trim. Both styles were offered in the 1915 catalog, but I know this corner-block, curved-face trim style to be prevalent closer to 1900 -- I had a 1907 house in the city of St. Louis, that had this style trim. These photos are from this real estate listing.

And, here it is, shown in the 1915 building supplies catalog:

Exterior Features
The Avoca included brackets to support the overhang on the bay. Here is the East Hampton, CT Avoca, showing that-- and we see the expected size of the side extension of the Avoca (the West Point, VA house has the side porch added):

Here is the front of the West Point, Virginia Avoca, showing its bay brackets:
Let's close with a few more exterior photos of the Sears No. 109 / Avoca in West Point, VA:

That's it! We have more Avoca examples on our national database of Sears houses in the U.S., but we are always happy to add more... feel free to contact me if you know of one.  In the earliest catalogs, for a short while, Sears offered a very similar house, without the bay window look on the front, and with a small dormer over the front porch side of the house. The interior layout was pretty different from the No. 109/Avoca, though. I wrote a blog post about that model, here.
Posted by SearsHouseSeeker at Saturday, July 03, 2021