A Short-Lived Sears House: The Sears No. 108

Happy New Year! It's 2020, and we're excited to continue our searching for Sears Modern Homes, many of which were built during that exciting decade that began 100 years ago, the 1920s. However, today's blog post takes us back to the very early years of the Sears Modern Homes program, to take a look at a short-lived model whose run spanned 1908-1913... and then it disappeared, to have its model number unceremoniously re-assigned to a different house. I'm talking about the rare model No. 108, that you see above.

Up until a week ago, we had only one No. 108 on our National Database of Sears Houses In The U.S..  It was a testimonial house that had been mentioned by a real estate developer in Norwich, Connecticut. He wrote in to tell of the four Sears houses that he had built in town, and one of those was the No. 108. We didn't know exactly what year he sent in that letter, but, once we had seen that No. 108 in Norwich, CT, we knew that he had to have built those houses pretty close to 1908, because the design of the No. 108 that he built, was changed by the 1912 catalog. The very first offering of this model was in 1908, and it looked like this:
See that corner bumpout? It's kind of awkward, I have to say, but it helps us date the house... and, from the inside, it does add a nice bit of space to that parlor, and looks fine. Here's what I'm referring to:
A bit of research in a historic newspaper database, netted me some really helpful information that now allows us to date the building of the testimonial No. 108 in Norwich, most likely to 1910. Though this house from Beckwith's testimonial letter, was built on Kinney Avenue, the other three of those four houses that Beckwith wrote in about, were found on Thames Street, the street on which Beckwith lived, according to the address given on his letter to Sears. Here's a mention, in a May 1910  newspaper, of W.W. Beckwith involved in a sale of properties on Thames Terrace (a street near Thames Street) and Kinney Avenue:
We see mention of Beckwith's building endeavors on those two streets two days before that, on May 25, 1910:
According to the 1910 Norwich City Directory, Austin Perkins lived at 130 West Thames Street, so I imagine that one of the Beckwith Sears houses -- found at 124, 136, and 140, on West Thames -- is the house being referred to here.

The 1913-Era Sears No. 108
So, as I mentioned, that was the only No. 108 that we had on our national database. That is... until the owner of a Liberty, Indiana house, asked about her house, in a small Sears Kit Houses group that some of us are in, on FaceBook. She had always been told that their house was a Sears house, but had never been able to find what model it was. Well... no wonder. The early No. 108 was, for some reason, left out of the best reference resource out there for the history of Sears Houses, which also includes catalog images of (almost) all of the Sears models: Houses By Mail.  It was just before Christmas, and everyone was busy, and no one really answered Amanda's question about her house. A couple of days after Christmas, I checked back in... and had a thought... I decided to check the re-print 1913 catalog (Amanda had said that her house was built in 1913, but build date information is often incorrect in town resources), to look for that house.... that No. 10-something... I had looked around for it before... and I thought it had these lines. And... yup! That's the one! The 108! So, I messaged Amanda... 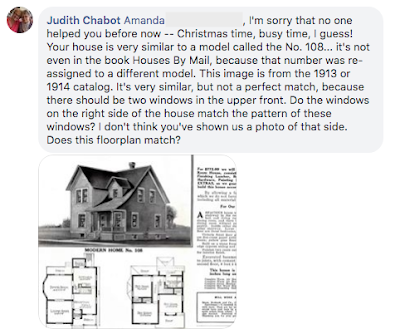 I realized, then, that we had no other No. 108 models of this version, on our national database, so I was really pleased to be able to add Amanda's house to our list. As we exchanged some more information outside of the group, I learned that not only was Amanda's house a No. 108, but that there was another No. 108 in Liberty, Indiana, as well! Two brothers had built the houses, in two different areas of the small town of Liberty, and, so, that meant that I would be adding not one, but two more model No. 108s to our list. Woo hoo!

Let's take a look at both of these houses, which are both light grey, just like the one in Norwich is... although... you'll notice that these two houses have a flat front. That awkward corner bump-out was removed from the Sears design, beginning, probably, in 1912 (I've not seen a 1911 catalog, but I assume that, since the color ad for Seroco paints, in the 1910 general Sears catalog, shows the earlier design, that the design had not yet been changed in 1910):
Amanda's house sits on farmland, on the outskirts of Liberty. Amanda knew the last name of the two brothers who had built the twin Sears houses--Huntington--and a little research on Ancestry.com, led me to learn that the brothers' first names were Harry, and Howard. Harry is the brother who built Amanda's house, and he would have been 30 that year, while Howard would have been 29 if he built his house that same year. It is likely that the build date of 1913 is correct, since that is the last year that this model was offered in the Sears Modern Homes catalogs (beginning in 1916, the number 108 was assigned to the model we know as the Saratoga, which, before 1916, had been the No. 146 -- you can read about that model in this blog post of mine ).

Amanda very kindly shared photos of brother Howard's house, which is on a street in town in Liberty. Howard lived here with his wife, Stella, and their sons, Marion and Lawrence: 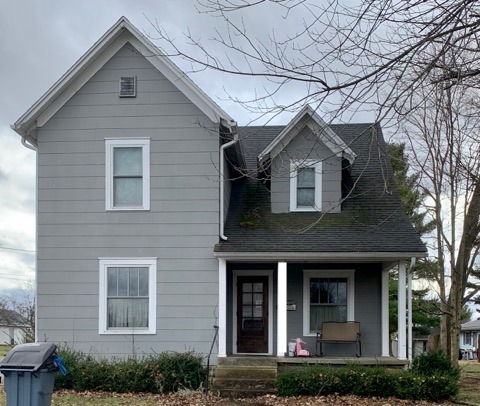 But, wait... there's more!
I have to thank Amanda for sharing her photos with me, and allowing me to blog about her home, and its twin, in town. The image that I showed her, at first, in fact, was from the 1913 catalog. And... on that catalog page, there was a little box that we call the "built-at box"... it's where Sears mentioned the locations where other homes of that model had been built...at:
So, for a lark, I thought I'd pick one of the towns mentioned, and look around a bit. This isn't my favorite method of researching... I get irritated when Google streetview goes slowly, and I get frustrated when I don't find the house I'm looking for. So, I didn't think I'd be long for this search. But... when I looked at the outline of West Haverstraw, New York, on Google maps, I looked a bit at the street names, and randomly picked one to plop down on. I chose Center Avenue, and plopped down right where the green arrow is. 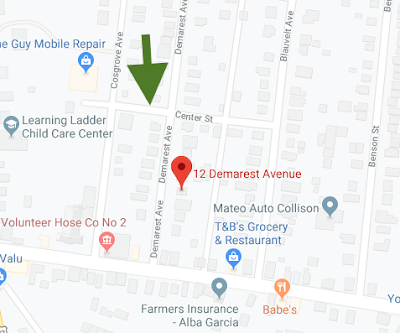 Then... looking down the street that intersected it -- Demarest Avenue -- I found Sears No. 108 number three! There, sitting at #12, Demarest Avenue, is a house that looks to fit the bill very nicely. Sure, it has a bay window added in front, but, otherwise, it's a great match for the No. 108, 1913 version.  And, since that town was mentioned in the 1913 catalog,  and the house is of the second style of this model, without the side bump-out, the house on Demarest must must have been built around 1911 or 1912. Here it is!:

The real estate listing for this house (which has had the same owners since 1979), says that it was built in 1911. In this instance, I'd say that is most likely correct, or very closely. It wouldn't have been this design, if it had been before that, and it wouldn't have made it into the mention in the 1913 catalog, if it had been much later.

But... What About The Inside?
That is always my first thought... what does this house look like inside!?? So, I always search the real estate listings for a possible recent listing, with good photos. Well, we are in luck! The early No. 108, the one in Norwich, Connecticut, the one with the funky front corner bump-out, was for sale in 2018. And, there are great photos with the listing! Without further ado, let's take a look at what the interior of an early Sears No. 108 looks like: 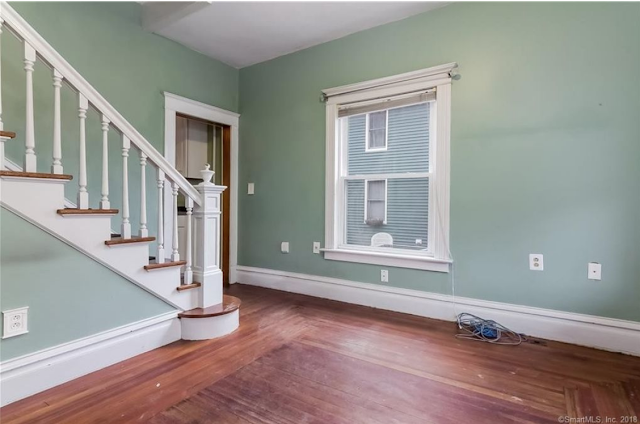 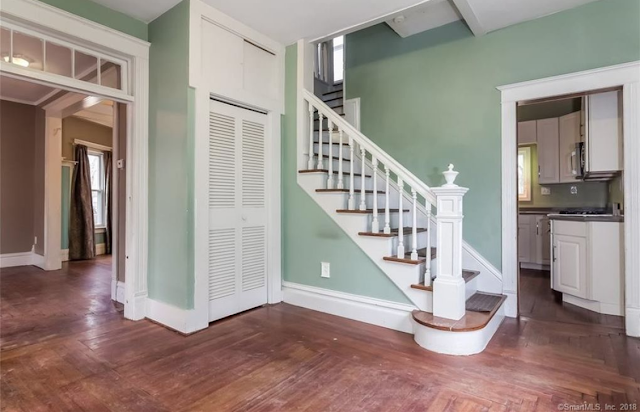 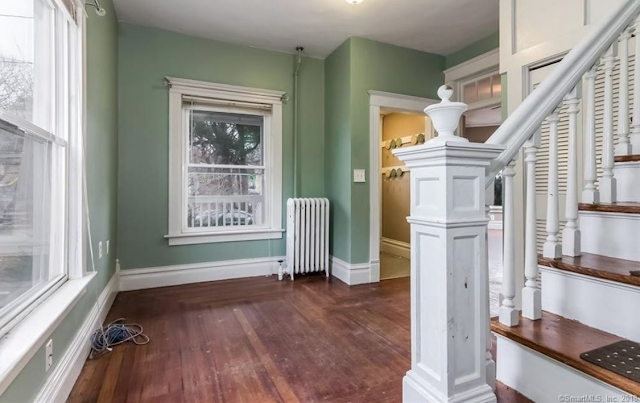 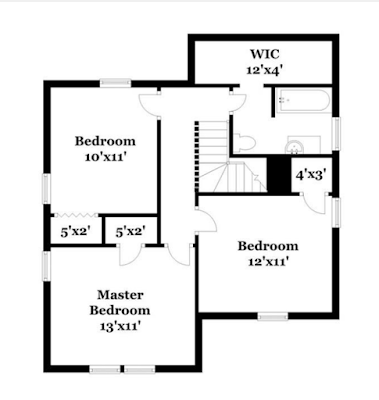 Here's a funny thing: The real estate listing gives build year for this house as 1929. This information would surely have come from the town's assessor records. Well... nope! We know for certain that this house was built almost two decades before that. This is why we definitely don't automatically trust town assessor records.
Since we so rarely get to see the rear of our Sears houses, let's grab that last photo, so you can see what the back porch normally looks like on this model:
And, with that, I'll wrap it up! I'm pretty pleased to have been able to add three more of this model, to our national database, and loved getting to see the inside views of this cool model. I hope the new owners are enjoying it!

Posted by SearsHouseSeeker at Friday, January 03, 2020