Every year, around this time, I like to feature a Sears Silverdale model, in memory of my mom, who grew up in the one that her grandparents built, in 1911. Back then, when this model was first offered, it was marketed as the No. 110.

This year, I have a really lovely example, in Paris, Kentucky, that was in the real estate listings in 2019. It sold, ironically, for $110,000. Since I'm not sure when this Paris, Kentucky house was built, I don't know whether it was bought during the No. 110 years, or during the Silverdale years. But, it does seem to follow the floor plan of this model very well, and the real estate listing even mentions it being a Sears kit house... though, as we (should have) all learned by now, those aren't always accurate statements. In this case, I think it is, though.

This style farm house (called a Gabled-Ell) probably looks pretty common to most folks. And, in general, it really is. But, I've studied the Sears version of this model quite a bit, and there are things about it that distinguish it from non-Sears, non-kit houses. For one thing, this style farm house, when not a kit, always seems to be much taller. Usually, the roofline doesn't start until about the top edge of the upper windows. But, the kit versions always seem to be more like this (for all of the kit companies)... see how the upper windows sit up pretty high into the roof line? The start of the roof line is practically half way down into the height of the window. Here's what I mean: 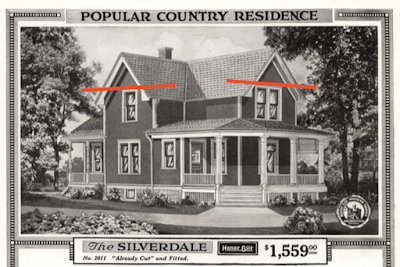 Now, please don't start thinking that any farm house that you see, that has the roofline starting where the Silverdale's does, is a Sears house. I'm just pointing out that when I see a gabled-ell farmhouse out in the wild, that is tall, like the blue Indiana house in the second photo -- and most of them are -- I know that it isn't one of the kit houses.

There were two other kit companies that sold a lookalike version to the Silverdale. Their versions are almost identical to the Silverdale, but there are some small differences inside, and one definite difference on the outside: the shape of the front porch roof:

The Silverdale's front porch roof has a sort of notch out of the corner, so that the two sections of the roof don't meet at a right angle. The lookalikes by the Gordon-Van Tine kit company,  and Chicago Millwork Supply Company, don't have that notch. I wrote all about this, in a blog post, here, from 2015.

The Paris, Kentucky Silverdale
Here is the floor plan of the Silverdale, from the 1921 catalogue. After that, I'll just post the many interior photos of the Kentucky Silverdale, and let you take a look. The kitchen is nicely remodeled, and in the same spot, but a bit re-designed, I would say.

Just to get you oriented, let me show you a few photos, compared to the floor plan. Because of the perspective of the interior photos of the Kentucky house, we need to compare to a flipped image of the floor plan, so that's what I've used here. Normally, the front entry vestibule (labeled as "hall"), is supposed to have an entrance into the dining room, and one into the living room. This house has eliminated the entry door into the dining room, but does have the one that leads you into the living room. My mom's house, had the opposite... no entry into the LR from the vestibule... it just leads you into the DR. 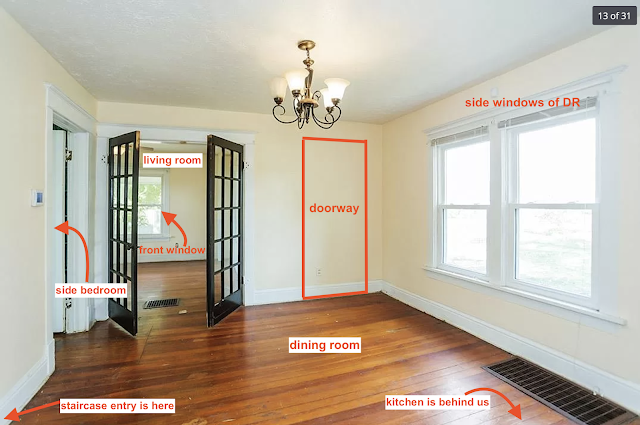 Returning to the front of the house, below, we are in the living room, looking back, through the French doors, into the dining room (the ceiling fixtures can help you recognize which room you are in). 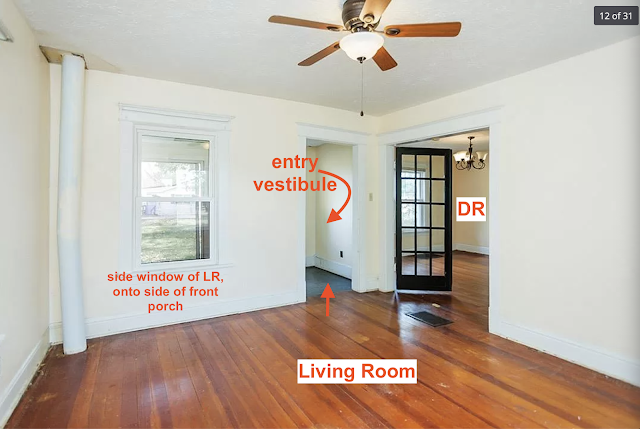 Below, we're going back to the front of the house, looking straight at it, this space is the ride side of the house. The window is the right side window of the living room, and that extended part of the house, is the little side bedroom on the first floor.


This view, is the full-on view of the right side. Those two upper windows are for, on the left side, one of the small bedrooms upstairs, and, next to it, the window at the top of the staircase. Behind that, is an extension to the kitchen area, that this house has had added on to it, that's not on the original floor plan.

Here, looking from the back of the house, is that added sunroom/porch:

The back wall of the kitchen, here has the sunroom/porch off of it.


So, the kitchen now spans the back of the house. The refrigerator is indicated, on the floor plan, with a star, and I've shown, in blue, where the new sunroom/porch was added. They took over the original bathroom space, to enlarge the kitchen. I think that they turned the small pantry space, into a small bathroom. 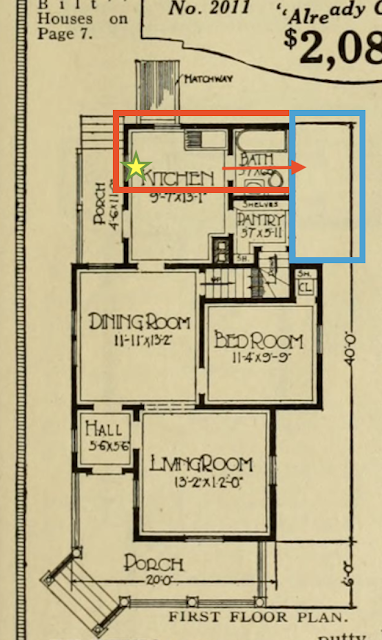 Upstairs In The Kentucky Silverdale
Here, in no particular order, are the upstairs rooms. 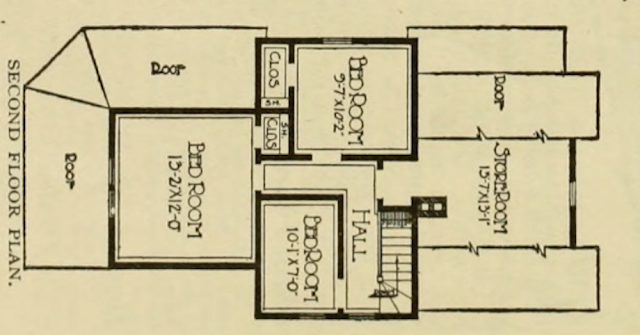 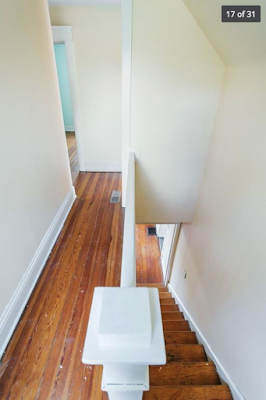 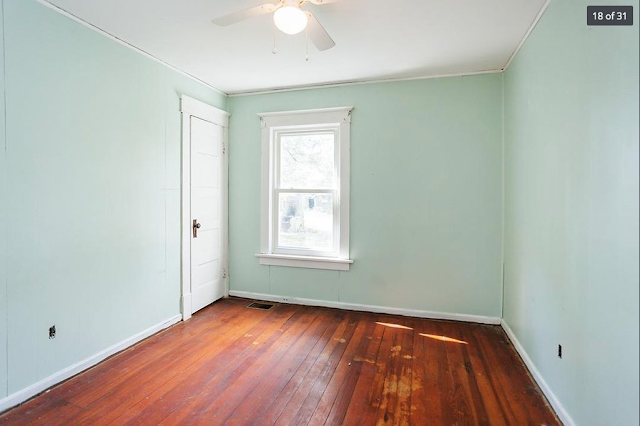 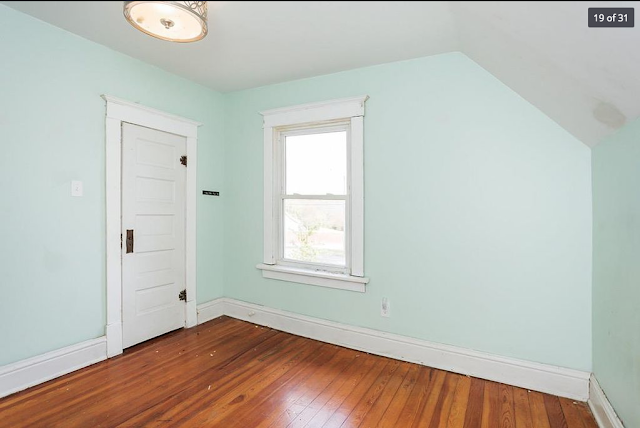 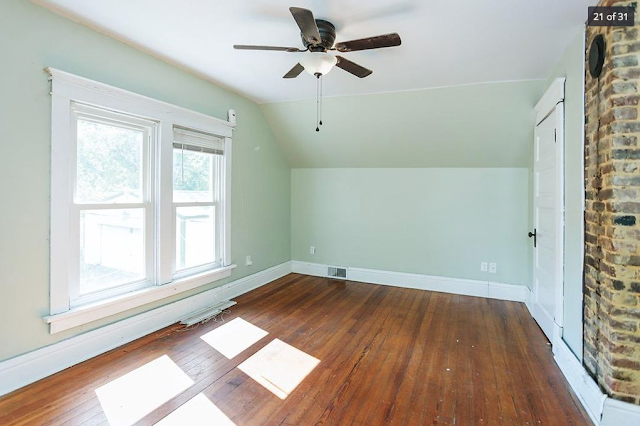 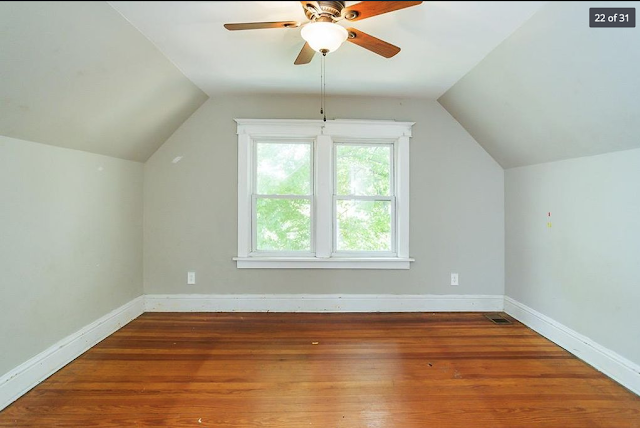 Front Of The House
Here is the front of the house, as seen from the now-enclosed front porch. The door we see, is the one into the entry vestibule. The two windows here, are into the living room. 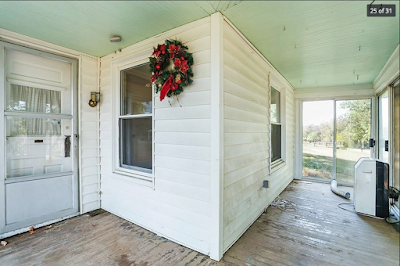 Other Blog Posts About The Silverdale
Here are my other blog posts about this model:

The photos of this house, are from the original real estate listing, which you can see here, on Realtor.com.
Posted by SearsHouseSeeker at Wednesday, August 26, 2020