You often hear about how Sears houses were made of pre-cut framing lumber, with all of those pieces stamped with a letter/number combo (like A25, or C236), to help identify the size and placement of the piece, during construction. But, that pre-cut system did not begin until the 1916 catalogue. Until then, the kits were shipped with standard length lumber that you still had to cut to fit your plan, either on the job site, or at a lumber yard with a planing mill. So, since this model was first offered in 1913, the first three years that it was available, it was only available as a standard-lengths, not pre-cut package. Beginning in late 1916, you could opt for buying either pre-cut or not, and after that, it was only offered as a pre-cut model. It was first referred to as the No. 205, in 1913, but in 1914, most models were given a number that started with "264P...", so this became the No. 264P205. In some editions of the 1916 catalogue, it was the No. C205 (though it had 4 numbers, because it now had two floorplans, and each was offered either "not cut and fitted" or "already cut and fitted") , and in 1917, it was called the No. 264B205. Beginning in 1918, it was marketed with a word name: the Winona (however, throughout the rest of the years of the catalogues, though each model had a word name, it also had a number to refer to its floorplan[s]). The Winona remained in the Sears Modern Homes catalogues until the last issue, in 1940.  There were seven different versions of the floor plan offered throughout those years... though sometimes the only difference was the length/depth of the house, to allow for a staircase in the back, to go up to a full attic. Also, some years shared the same floor plan, except for the front porch look.

Already-Cut Houses
Let's start by taking a look at three pages from an early edition of the 1916 catalogue, where the new "already cut" option is described (these pages are from a catalogue online, offered by Daily Bungalow/Antique Home, and used with permission): 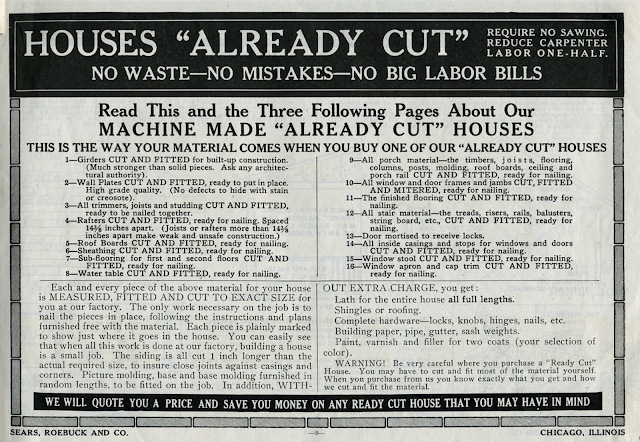 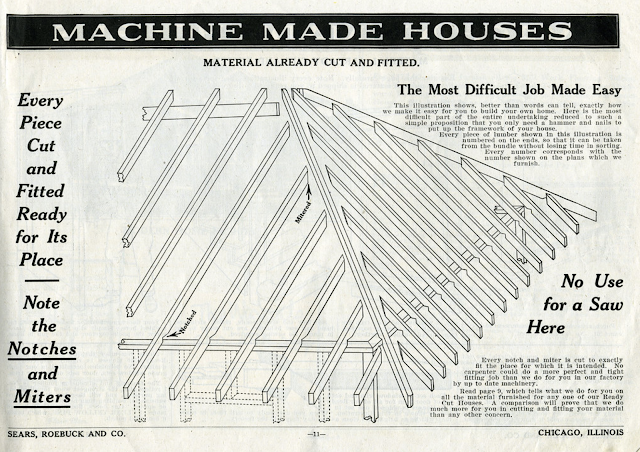 Exterior Looks
Next, let's examine the exterior look of this model. That, too, changed over the years, and had three different versions.

First, beginning in 1913, when it was the No. 205 model, it had two chunky front porch columns, and a series of seven brackets supporting the eaves of the roof, in front. Those brackets, at least going by the look shown in the catalog image, were 3-part brackets... like an open triangle, with all three lengths being solid pieces. This was the look that was shown in the catalogues through 1917:
Beginning in 1918, and continuing through 1926, the look is very similar, still with chunky porch columns, but the number of front eave brackets is reduced to five, and the brackets are now the trademark Sears 5-piece brackets (we usually only see these on Sears houses). The 5-piece bracket is still made in a triangular shape, but the front of the bracket system is actually two parallel pieces, making it look like the front of the brackets is open (and, you can see a center stabilizing piece poking out into the center of the bracket). The side windows are shown differently, because an additional floor plan option was added, in 1916, and this is that plan's window configuration. It's the pattern we see on the house on Prospect Street.

Here's a close-up view of a Sears five-piece bracket, as described in a blog post of mine about a Sears Sunbeam model in Pennsylvania:

And, the final look of the Winona, as shown from 1927 through 1940, is a much more modern look (for that era), with a more sleek feel to the front porch columns, and with a change from brackets to purlins, to support the front eaves of the roof. This catalogue image shows the final floor plan, which included a side bump-out (for the dining room), and two windows (on either side of the front door) on the first floor front of the house (however, even during the years when this look was offered, there was still an optional floor plan without a side bump-out, and with a pair of windows to the left of the front door ):
Catalogue Pages Over The Years
Finally, let's see how the catalogue pages looked throughout the first years-- actually seeing them gives you a better sense for the differences. I'll pull out the floor plans in a more organized way a bit further down. If you're not interested in analyzing the catalogue images and the various floor plans, feel free to scroll on down to the pictures of the interior of the house. 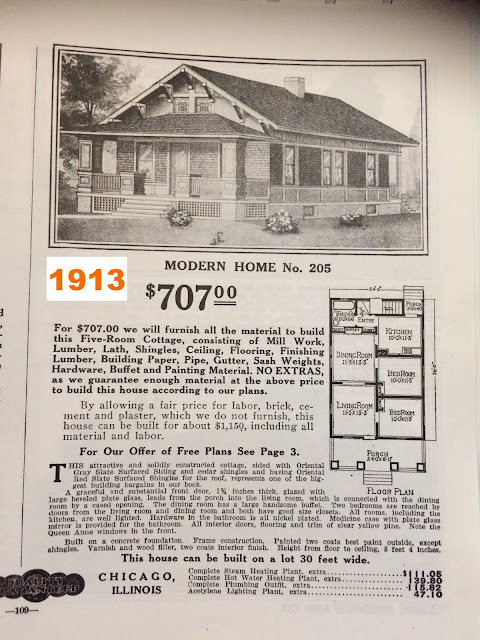 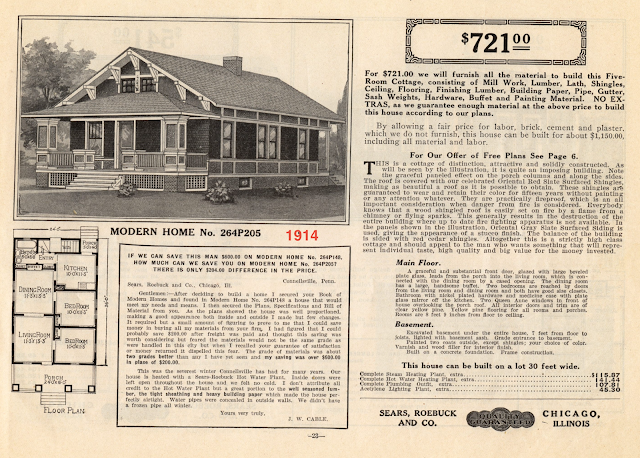 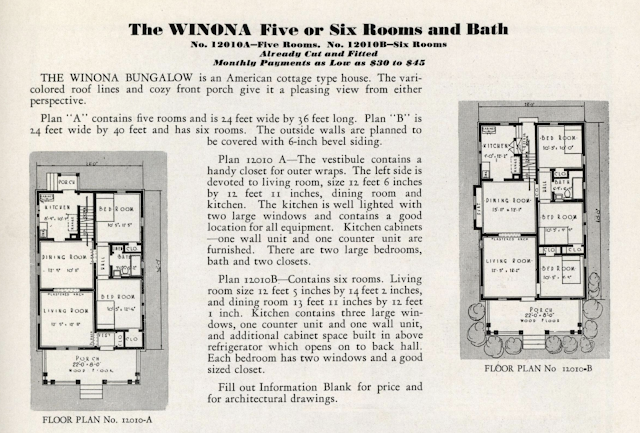 The Winona Floor Plans
Here is the evolution of the floor plans. We pay close attention to the layout of the windows and doors, when we're trying to identify a Sears model.

The Chunky Front-column Years
First, the floor plans when this model had those chunky front porch columns, and triangular brackets (1913-1926):


Front Porch Changed To 3 Slimmer Columns
The bump-out version from 1927-1938/39, is the same layout as the bump-out version that was introduced in 1923, with chunky columns... only the front porch is changed, and the roof brackets are replaced with purlins (see images earlier in the blog post).

In the final catalogue, the Winona has the same two floor plans it has had since 1927, but the bump-out version was widened by a foot and a half!
Lookalike Models To The Sears Winona

We often find that there are similar-looking models to Sears models, offered by other kit companies, or by plan book companies. Sometimes, you can barely tell the difference, and you have to pay attention, on the outside, to things like the type of brackets used, or purlins vs brackets, or porch columns, or the placement of the furnace vent chimney. We always carefully check out the number and location of windows and doors. Here are a few lookalikes that we're aware of, for versions of the Sears Winona:

Wardway Venice
On first glance, the Wardway Venice looks like a dead ringer for the earliest versions of the Sears Winona. However, one big difference to note, is the decorative strip along the top of the sides of the house. Its stripe pattern is different than that on the Sears model, and the Sears model also has that strip on the bottom, whereas the Venice does not. This feature might be missing, on a house in the wild, that has had vinyl siding added, though. Also, though the earliest floor plan of the Winona, with chunky porch columns, did have two windows on either side of the front door, it never had that layout AND 5-piece brackets... at least, not according to what was shown in the catalogues.
Bennett Dover
Bennett Homes of upper New York State, also had a chunky-columns lookalike to the early Winona. However, it also had a little bump-out on the left, that is smaller than the eventual bump-out of the Winona. Also, it is missing the decorative striping on the upper and lower edges of the sides, and the brackets aren't a match to the era of Winona that had a bump-out. The size differs from the Winona, as well.

C. L. Bowes Plan Book Model
C.L. Bowes was a publisher of plan books, of the type that a contractor or lumber yard might carry. So, they were in competition with the kit companies, and just sold plans, not building supplies. A 1918 C. L. Bowes plan book offers this model, which is very close to the earliest Sears (No. 205) version. Its floor plan is the reverse floor plan of the Sears No. 205 (the first Winona floor plan), but... the front porch roof is supported by straight purlins, not by triangular brackets. There is a decorative bottom strip along the sides, but it's not quite the same as Sears offered, and there is not visible decorative strip along the top of the sides. 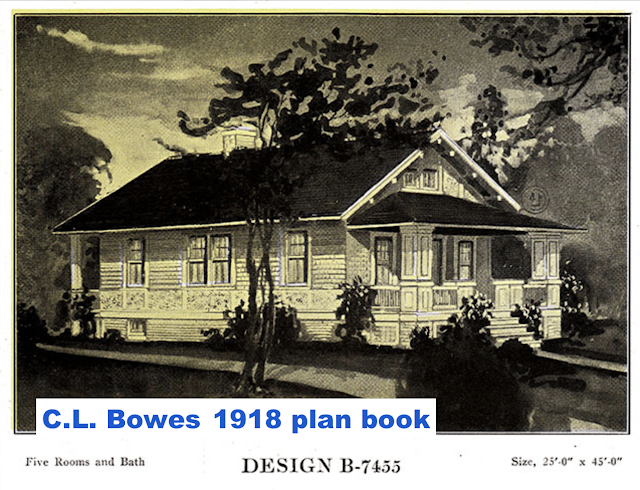 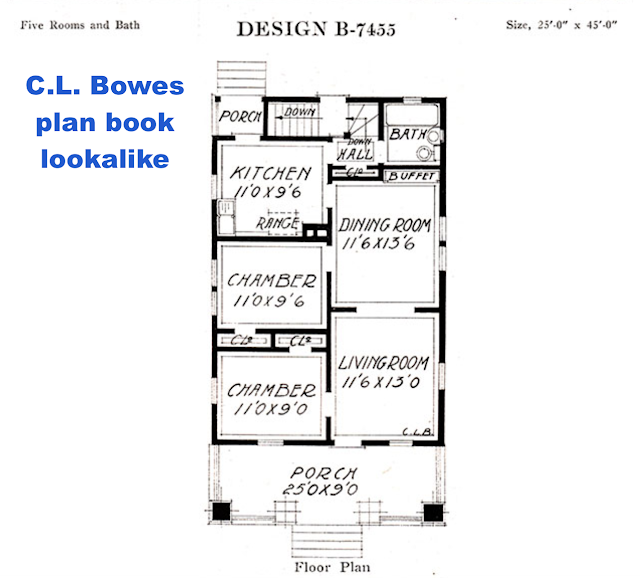 Here are the two floor plans side by side:
Bump-Out Lookalikes
Both Wardway and Gordon-Van Tine offered a lookalike to the final version of the Winona, the one with the bump-out and the front porch with purlins and two windows and slimmer porch columns. In fact, the Wardway and GVT models are the same as each other, because of the working relationship between the two companies (GVT was subcontracted to provide the pre-cut lumber for the Wardway kits, so both companies offered almost all of the same models, once that relationship began).

The Wardway and GVT bump-out lookalike has two obvious differences:


Back To The High Bridge Winona On Prospect Street
Here's where we take a closer look at the Sears Winona on Prospect Street. Thanks to a real estate listing, we have interior photos. I believe that it follows the 40' deep 2nd floor plan, because that one allows for stairs in the back of the house, off of the kitchen, to lead up to a full-length attic, which this house appears to have. The one change we can see, is that the built-in dining room hutch that Sears shows, was placed (smartly) in the kitchen, instead, on the back wall, where there would have been a window. Also, the Prospect Street Winona has half of the front porch enclosed. Click on any of the real estate photos, to get a much larger version. 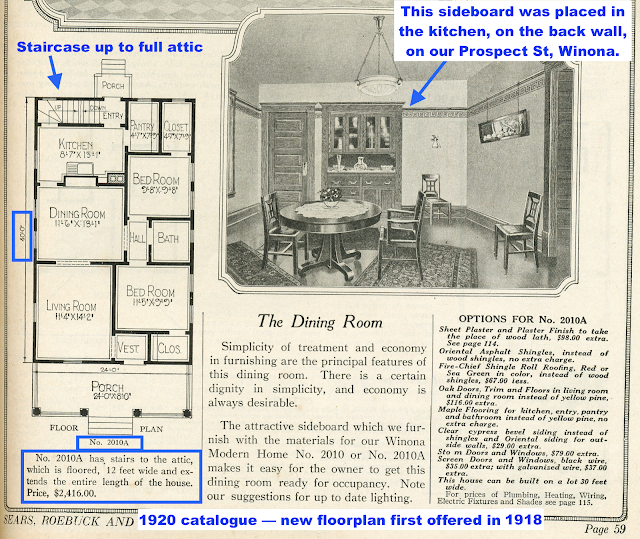 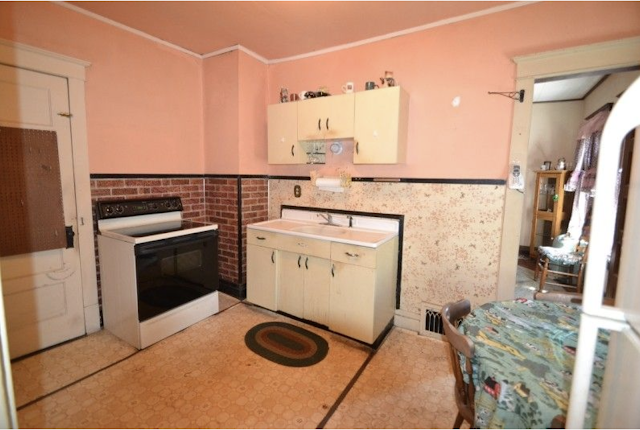 And, another look at the window layout, from the exterior views:

A Few Other Winonas Around The Country
Here are photos of some of the other Winonas we've found around the country, of various floor plans.
Here's a beauty that is gone now. It was a very early Winona with an early bump-out, that did not have a pop-up roof over it. Despite its peeling paint, it's a great example of a Winona. Cindy wrote two blog posts about it, and you can access them both, from this one.
Here's a real beauty, in Raleigh, North Carolina. It was authenticated through mortgage records, and was originally bought by Oscar L. Davis and his wife, Ida May Davis, for $6,800. The placement of the two back windows in the rear view, shows us that this is the smaller version of the second floor plan. 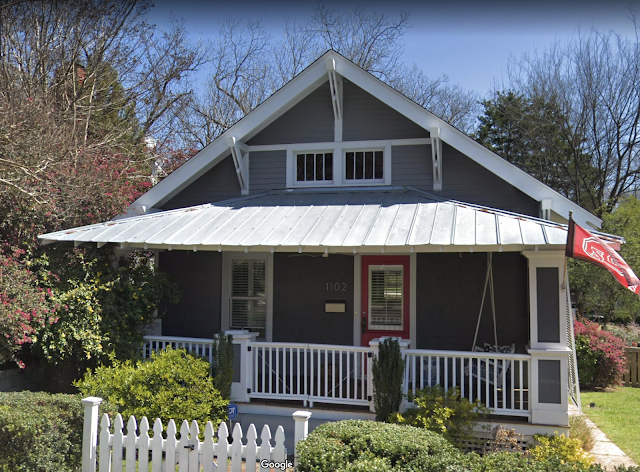 Marie Vore located this one in Akron, Ohio -- smaller size of the second floor plan, with a Sears two-car Bartlett garage! 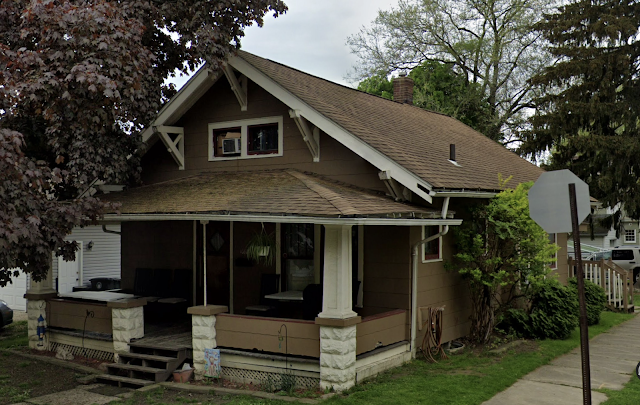 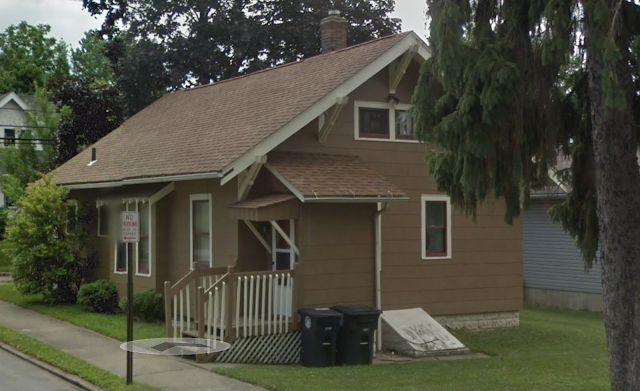 A very early one, in Columbus, Ohio 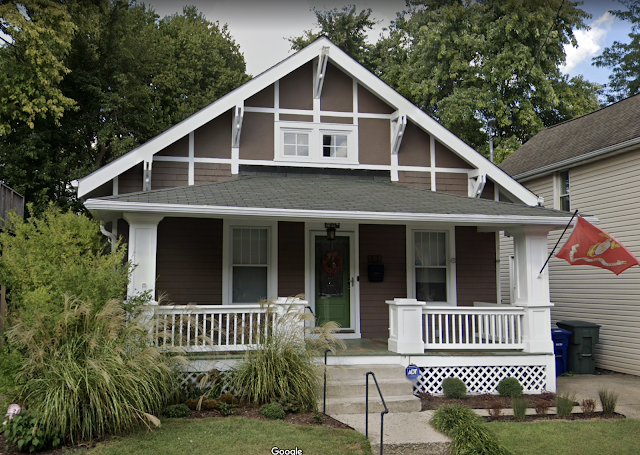 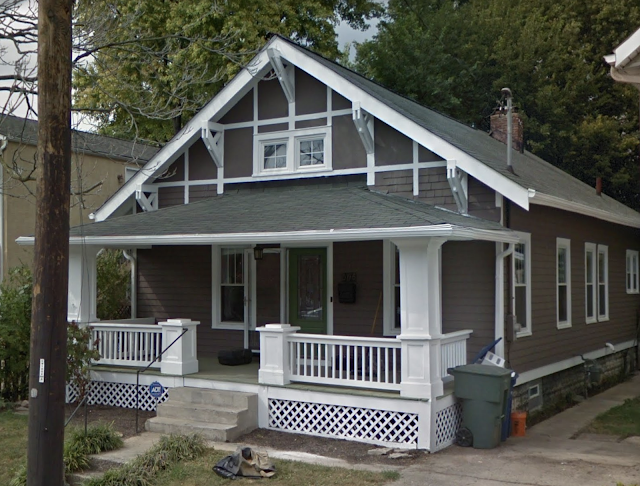 And, finally, one of the later model, an authenticated Sears Winona in Affton, Missouri, that had a mortgage through Sears. This is the version with the side bump-out. You can see lots of nice interior photos in this blog post about the house.
This beauty in Ann Arbor, Michigan, is an authenticated example of the no-bump-out final version of the Winona. It's perfect, and in fabulous condition! All of the windows and doors and rooms are in just the spot where they should be... just one big side dormer added. There's even a Sears Bartlett garage. The photos are from this real estate listing. 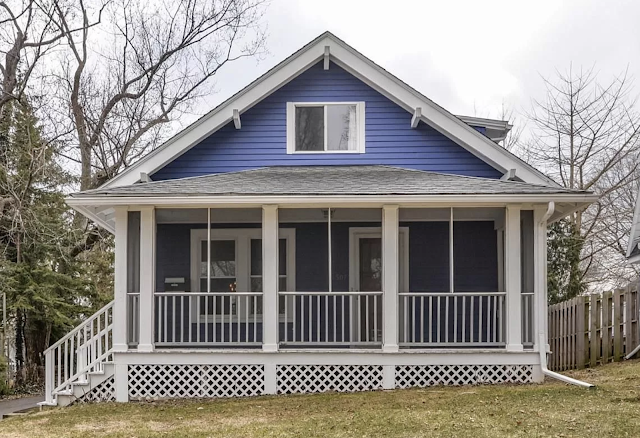 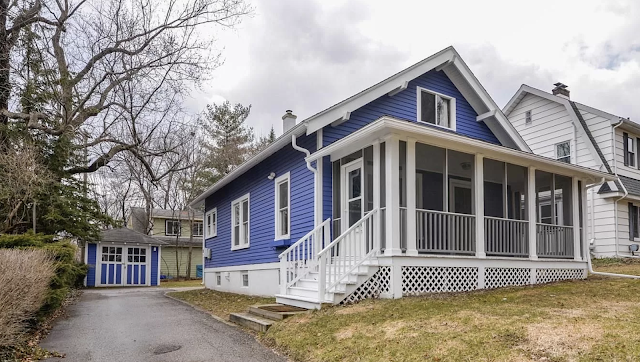 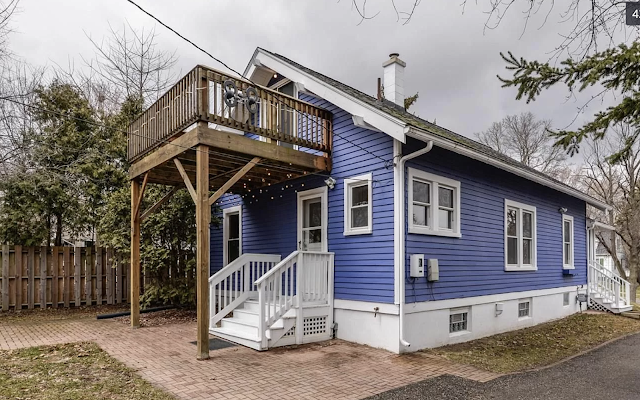 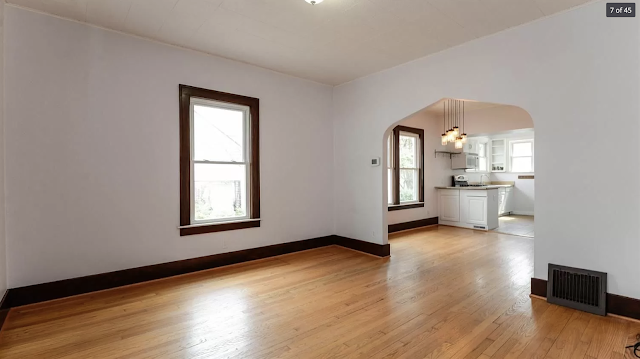 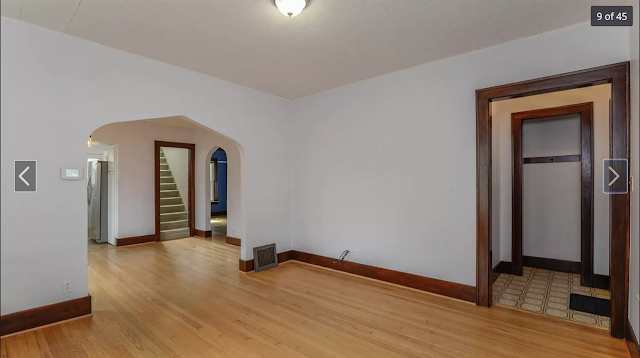 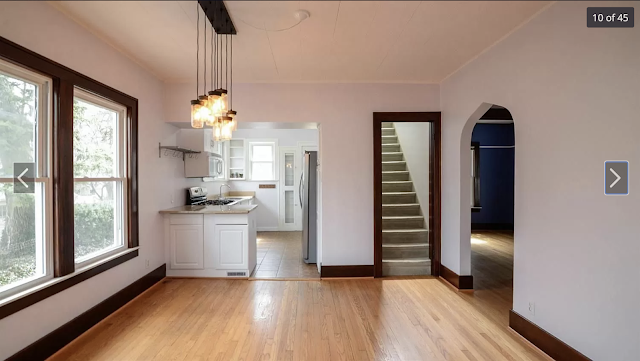 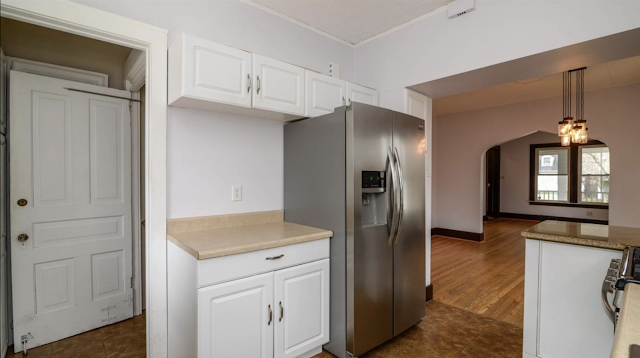 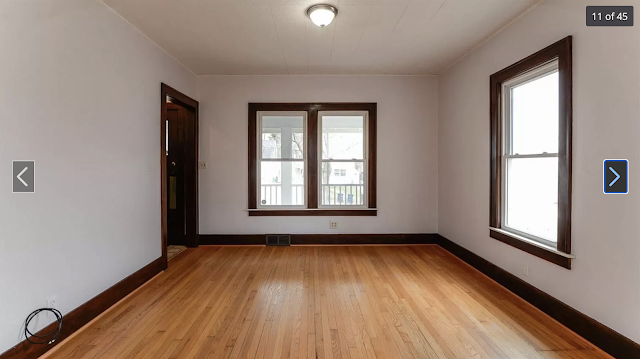 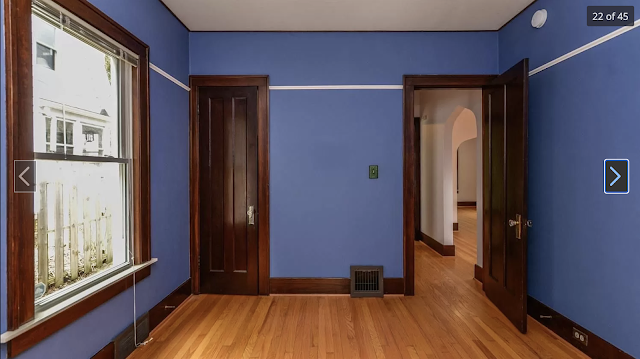 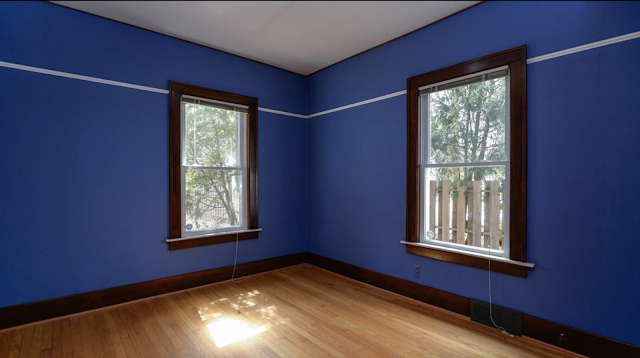 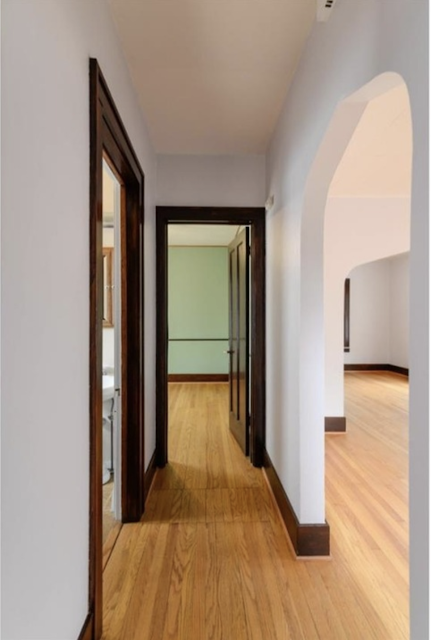 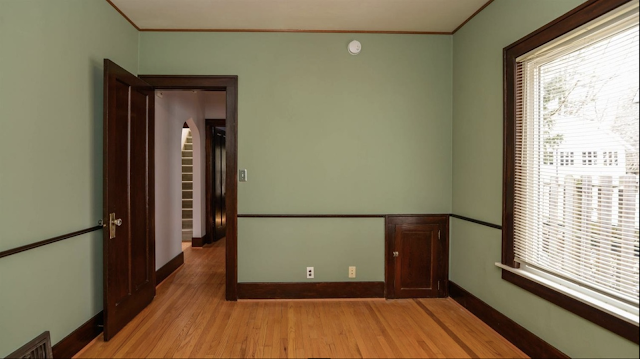 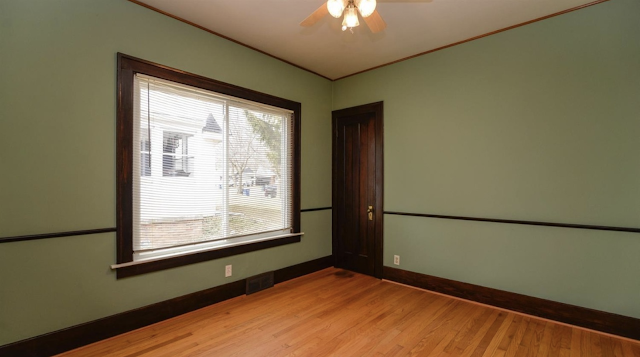 Posted by SearsHouseSeeker at Sunday, August 09, 2020