The little town of High Bridge, New Jersey (Hunterdon County), packs a nice little punch when it comes to Sears houses. We don't really know how many are there, because very little of the town is viewable on Google maps Streetview or Bing Maps. But, thanks to the magic of real estate listings, we've run across a few charming examples. The houses that I'm going to highlight in this series are especially lovely because of their original detail, and interiors rich in Craftsman-style, unpainted, gleaming woodwork. Today's model is the Sears Argyle. Let's get started with our tour:

Sears Argyle • 7 Seal Street
Thanks to Andrew Mutch for spotting this one in the listings. We were all so pleased to see the great interior views, and wanted to save them for posterity.

Let's take a look at the interior of 7 Seal Street: 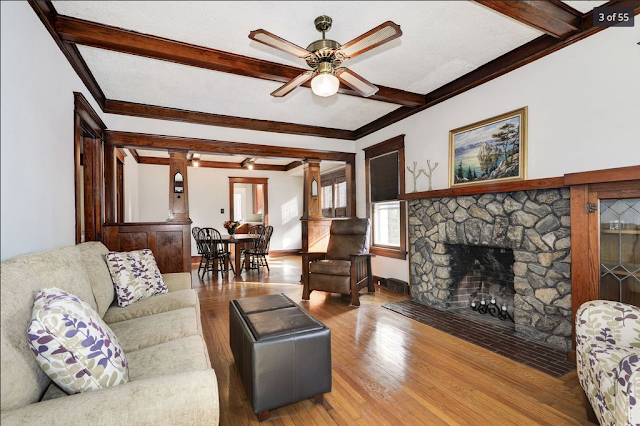 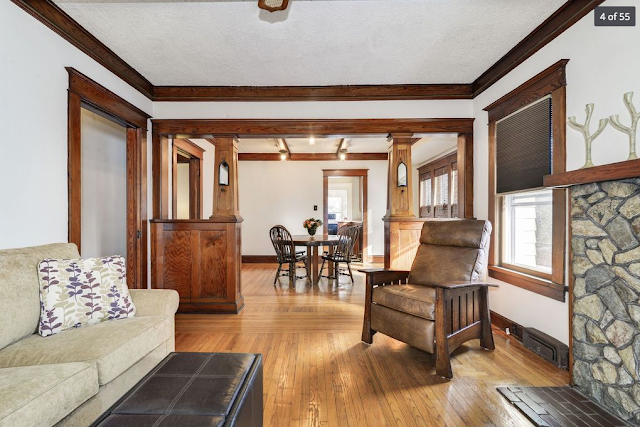 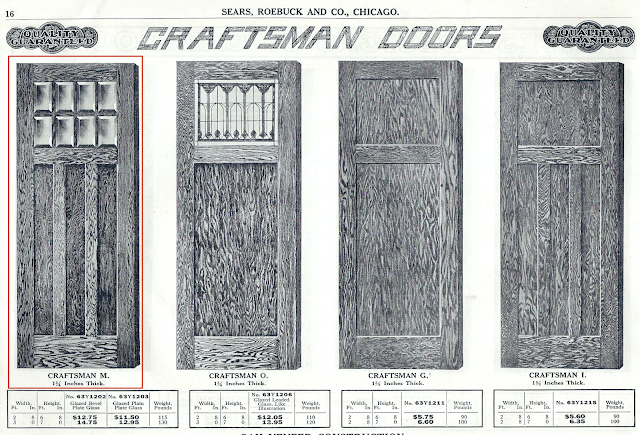 If you zoom in on the bookcase, you see what we call "The Sears Hinge". When we see this hinge, we know it is from Sears, as we have only ever seen this hinge in Sears houses. The cabinets and bookcases and doors came with a variety of hinges, so you don't always see this hinge. 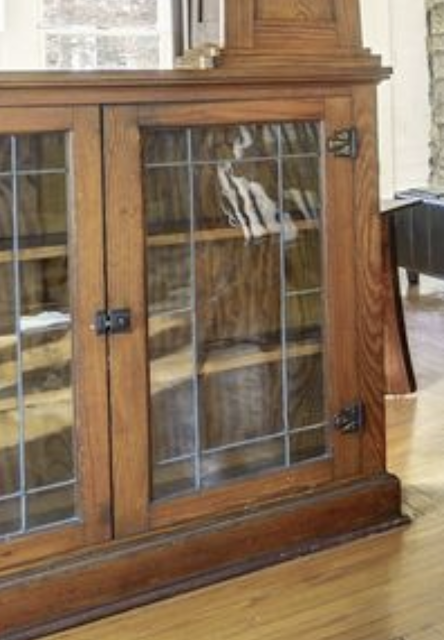 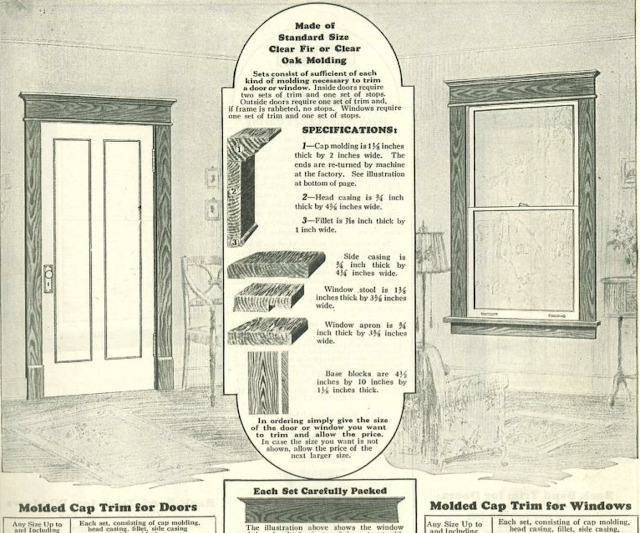 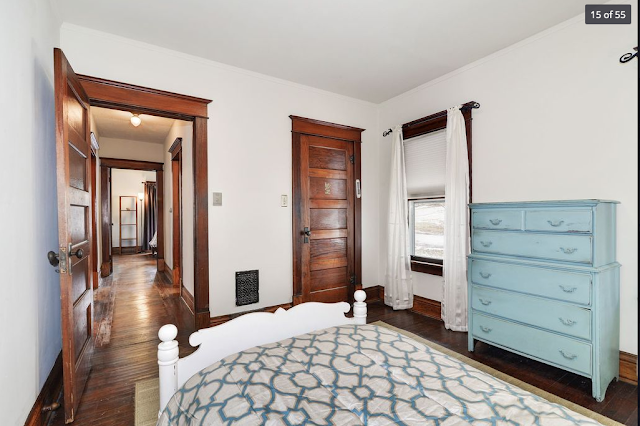 For some reason, we don't often get good shots of the bump-out side of the Argyle. You can only just barely see that bump-out in the last photo, above, of the Seal Street house in High Bridge, so here is that side on three other Argyles we've found around:

In the Catalogue
I've snipped these images from the Argyle's listing in the 1921 catalog: 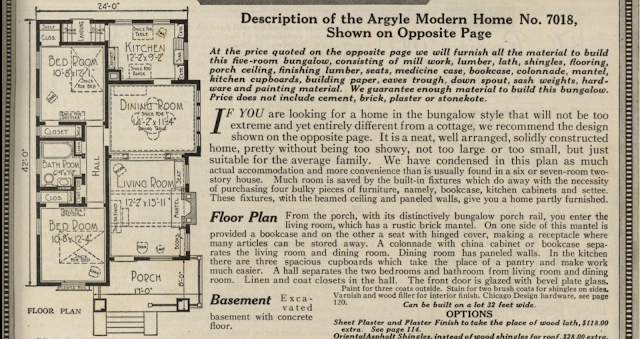 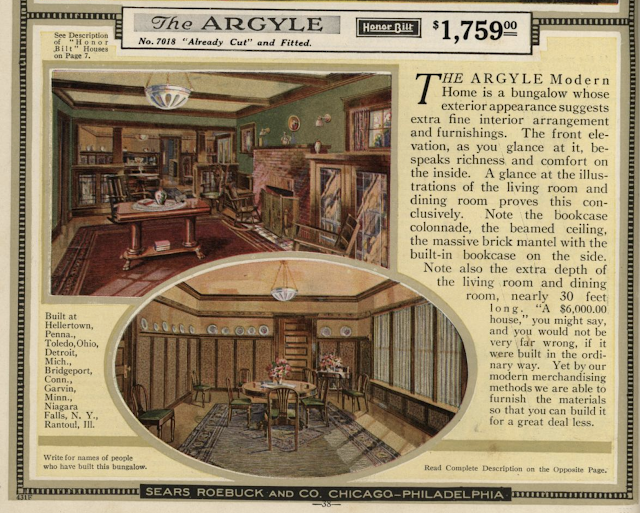 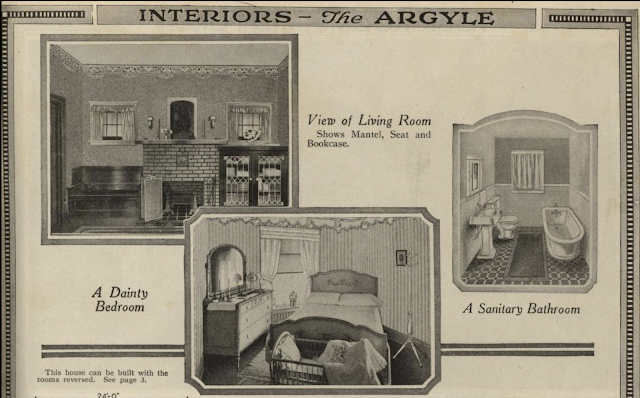 More About The Interior Trim
In the next two snippets from the catalogue page, you see mention of the millwork (interior doors, windows, window trim, and floors) all being (standard) in yellow or white pine. But, in the options, we see that oak doors, trim, and floors are an available upgrade, for an additional charge. I'm not a wood specialist, but I do want to point out that when we see painted trim, it often upsets people, who assume that gorgeous oak wood was painted over. But, in reality, many Sears houses (and others in their era) came with a lower-grade wood, intended for paint: yellow or white pine. Pine is beautiful, naturally, also, but it is the wood trim that is usually provided, when painting the trim is what is expected. It is also a softer and less-expensive wood. In later years (like in this 1930 Sears Building Supplies catalogue), we see that fir was the lower-priced wood offered by Sears, for paintable trim. This may all be related to which lumber yard the trim was coming from, in which area of the country. In the earliest years of the Sears Modern Homes era, Sears had a lumber yard in Mansfield, Louisiana, and southern yellow pine was the norm for trim wood originating there. In later years, Sears, instead, used the lumber facility that they owned in Newark, New Jersey.


This house on Seal Street has, I think, the oak option, because all of the wood is left beautifully unpainted, and has developed a wonderful patina over the years.

Other Resources About The Sears Argyle
I am certainly not the first person to write about the Sears Argyle. Here are a few additional resources with great information and images:

Posted by SearsHouseSeeker at Sunday, July 26, 2020