A month or so ago, I did a very long blog post about the Lewis homes built by contractor and Lewis Homes sales manager, Emil F. Kotz, in Syracuse, New York, in the 1920s.  Most all of those homes were found through research in Syracuse newspapers of the era, and I've since found another: this "comfy cozy" bungalow, known as the San Fernando model.  Kotz showed it in one of his many newspaper ads.

The San Fernando was offered in two slightly different sizes: 24' X 40', and 24' X 42' with the same layout of rooms (hardly seems worth the bother to make a second model, doesn't it?). Here are the floor plans, as shown in the 1924 Lewis Homes, "Homes of Character" catalog, on Archive.org. (Click any image to enlarge it.) 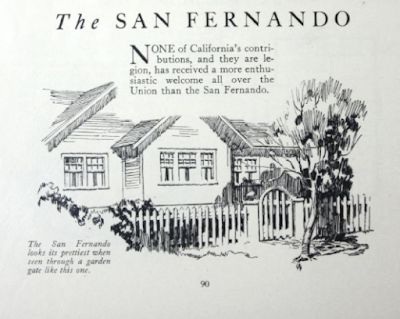 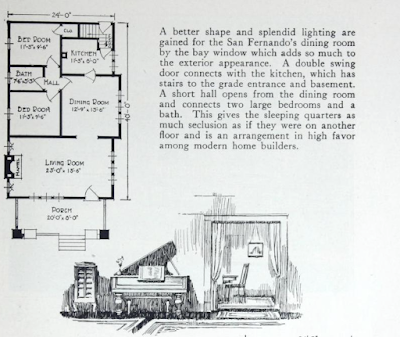 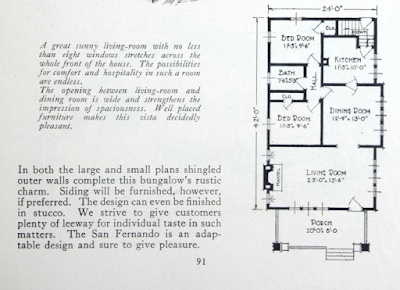 I ran across a Zillow real estate ad for this San Fernando on Grant Boulevard (the source of the lovely image above).  Here are a few more photos, which you can click to enlarge: 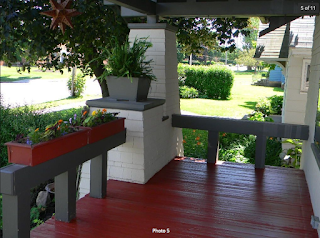 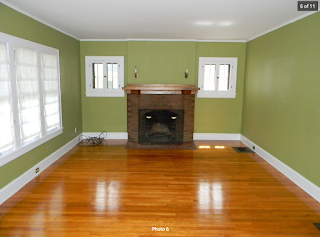 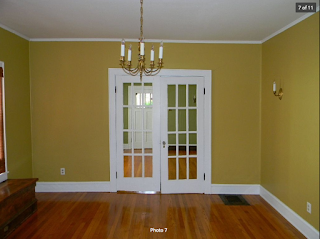 New Evidence About The History Of Lewis Homes?
In my previous blog post, I first focused on simply showcasing the 15 homes I had found newspaper ads for.  These were examples of Emil F. Kotz' excellent marketing skills, and they appeared in Syracuse newspapers from 1922 through 1928.  But, now... let's think about those dates.

With more reflection and continued research, I've come to realize that these homes in Syracuse are an indication that the history regarding the era of Lewis Homes may have been misunderstood. It seems clear, now, that Lewis's large, colonial homes were still being marketed, and built, through 1928-- they did not cease production in late 1924. Emil F. Kotz's homes in Syracuse are testament to this.

Most of the resources available about Lewis Homes (based in Bay City, Michigan), state that the company had a drastic change of marketing after their planing mill suffered a severe fire, in November of 1924.  All evidence up 'till now, was that Lewis Manufacturing Company completely, and forever, discontinued the marketing, and building, of their large colonial and four-square homes after that, and switched their focus to small, basic, cottage-type homes, re-branding themselves as Liberty Homes.  And, it's true that, beginning in about 1925 or '26, the only home catalogs that Lewis Manufacturing Company produced, were under that new name, and no longer offered those large colonial and four-square homes.

However, my research shows that Emil F. Kotz continued not only to market, but to sell and construct Lewis' large colonial models right through 1928.  Of the 15 homes I showcased in my previous blog post, I was able to establish -- using primary sources, such as newspaper articles and newspaper mentions of building permits-- that seven of those were built between 1925 and 1927 (I've gone back to edit that blog post, and include the build date for each of those models).  In fact, even as late as 1928, Kotz was still focusing his marketing on the large homes, as witnessed by a late 1928 ad in the Syracuse Journal, offering five of the big models, along with their prices for construction through his company:

The catalog cover below, comes from an excellent set of images of Lewis Homes catalogs from 1917-1925, on Daily Bungalow's Flickr feed (Daily Bungalow also offers the informative
AntiqueHome.org website, which provides background and images of house plans by a variety of companies.) 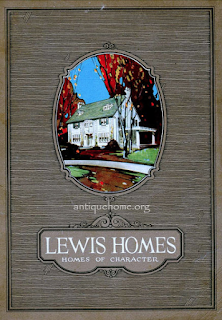 Above, we see the cover of the last known "Homes of Character" catalog put out by Lewis Homes. Its date is 1925, but it was surely put together and published before the November 14, 1924 fire that devastated the company's planing mill in Michigan.

The price list from the 1925 catalog shows all of the  many large models Lewis offered:
And, here we see an example of one of the Liberty Homes catalogs that Lewis Manufacturing Company offered, beginning in 1926, showing their new focus on small, basic, cottage-style bungalows:
No Longer Ready-Cut?
One possibility to consider, is this: I'm not sure that the term "Ready-Cut", or the words, "the Lewis Method", were included in Kotz's ads after 1924. I see them there in the 1922 and 1923 ads, but, it seems to me that the post 1924 ads use phrases like, "We save you money", or "less expensive", and refer simply to "Lewis lumber". If Kotz was no longer including the term, "Ready-Cut" in his ads, I wonder if that means that, though he was offering Lewis models, and building them, he may have been doing so selling the traditional standard-length boards that were cut to fit on site-- even if they were supplied by Lewis (the 1928 ad shown above, referred to "Lewis lumber prices", and said that they could "beat any local lumber prices", so the lumber was not coming from a local lumberyard).
We may never know for certain exactly how these Syracuse Lewis homes were cut and constructed, but one thing is certain: some of the original large colonial models by Lewis Homes, from the pre-1926 catalogs, were built in at least one town in America, after 1924, thanks to Emil F. Kotz and his construction company.

Posted by SearsHouseSeeker at Thursday, March 24, 2016