This Maplewood is the first Sears house that I found, in person, and that was back probably in about 2012 or 2013.

Of course, I knew about Sears homes, and had known something about them for decades -- of their existence, anyway.  Reading the best book out there about Sears homes, Houses By Mail, I learned more about the background of the kit-home phenomenon, and I became interested in studying all of the different models.  HBM, as we call it, has its flaws, but there is nothing (yet) like it to use as a well-organized reference. It was put out by the National Trust for Historic Preservation. Also, anything by meticulous researcher Rebecca Hunter, is not to be missed-- books or online information. Pair HBM with catalogs you can find online, and you're well supplied to begin. But, there's lots and lots to learn along the way.

However, for self-published books (on any topic, really), no matter how well-researched, keep in mind that there is no real editor or publisher to demand authentication of the author's "finds", and that can lead to inclusion of homes that look, on the outside-- and sometimes even on the inside-- just like a kit home model-- but have not been authenticated. They may, instead, be a plan-book home made by a plan-book company that only sold blueprints... like C. L. Bowes, or Standard Homes, or Architects Small House Service Bureau (still a great house, but just not a kit... and we're trying to identify homes that came as a bundle: blueprints, lumber, doors, windows, screws, nails, shingles, paint, hinges -- the whole shebang--and an instruction booklet).  If your book has lots of photos of houses simply labeled as, "This is a Sears Osborn", with no mention of it having been authenticated or documented (through marked lumber, blueprints, building permit, shipping labels), keep in mind that it may well NOT be authenticated. There is certainly value in seeing a real house that looks like that model, but, sometimes you're looking for little details, and using that real house's photo to help you. If you can't be certain that it really is an authenticated kit house, you just don't know what to trust. If I were an editor (and I am not!), I would tell my author, "For each house you include, you must tell whether or not it is authenticated, and how." I've said it before: there is no harm in showing what you believe to most probably be a kit home model... but, it is unethical and wrong not to state, clearly, that the house is not authenticated.

Just before I found this house,  a few blocks from my own home, on a lovely street filled with homes from the 19-teens, twenties, and thirties, I found a FaceBook group about Sears homes.  I eagerly joined it.  There, I learned about the existence, as well, of numerous other kit-home companies (Wardway, Gordon-Van Tine, Lewis, Sterling, and more).  But, that group (I think it's called Sears Homes-- recently it changed its name to Sears Kit Homes... despite the fact that another, smaller group was already using that name) became a disappointing ego-fest experience, where there was no room to learn, no room to make a mistake, and no room to ask questions that didn't suit the two main administrators.  Their need to show off, brag, make fun of others, and delete comments that showed that others knew as much -- or more-- than they did, turned my stomach.  In fact, at least one member of that group still, to this day, seems to try to track the research and blogs of members who left (because of her rude, twisted remarks and off-putting behavior), to try to discredit it, and them. I imagine there are people like this in most groups.  They're bullies, really.  They can be oh-so-artful at twisting the story and presenting themselves as the victims... yeah, right.  Their behaviors are always well-documented, as member after member of the group will have witnessed the bullying behavior over and over, so the only folks they are fooling, are themselves.  Oh well -- I hear this happens in sewing groups and opera groups, too :)  C'est la vie, eh?


So, I pulled myself out of that group, and figured I would just stop thinking about this interesting historic topic.

But, then, some of the other former members (and admins) of that group, pulled out to start their own FaceBook pages, no-doubt sick of the never-ending drama and rude atmosphere of the original group.  Sears Modern Homes was begun, and Sears Homes of Chicagoland (also an informative blog, available here), both welcoming pages where interesting posts and images are shared, and folks are able to leave questions and post pictures of homes they might want more information on.


Some of the avid, and accomplished, researchers who started those two FB pages, also wanted an FB group in which they could interact, share research finds, and seek opinions and advice from other intelligent, experienced researchers. But, they wanted it to be by invitation only, so that they could avoid the ego problems and bloated control-freak atmosphere that comes from including self-important members (you know the type-- I'm sure you do).


So, the group Sears Homes and Plan Book Houses was born on Face Book. And, knowing that I was interested in learning more, one of the admins invited me to join and have the opportunity to follow along and observe.  Since then, I have learned an enormous amount.  And, I have even become a contributor, and a blogger.  I can't identify 863, 000 models by fifteen different companies, but I'm getting pretty good at paying attention to the details, and looking for the right things. And, I enjoy it. I learn more every day. I am able, sometimes, to help others learn more, and grow in their own abilities to identify homes.  I have contributed to the building of a database of kit homes in the United States, an important reference for historic preservationists in our country.


So, what about this house?
I have since found the mortgage deed for this home, signed by Sears trustee E. Harrison Powell, authenticating it as a Sears home.

The original owners of this home, the family that went in to the Sears Modern Homes office in St. Louis, and picked it out of a catalog, and then committed themselves to (probably) five years of monthly payments, were Joseph John and Iva Heath, who brought their little boy, Joseph John, Jr. into this house in the early days of their marriage. Iva was only 19 when they married! 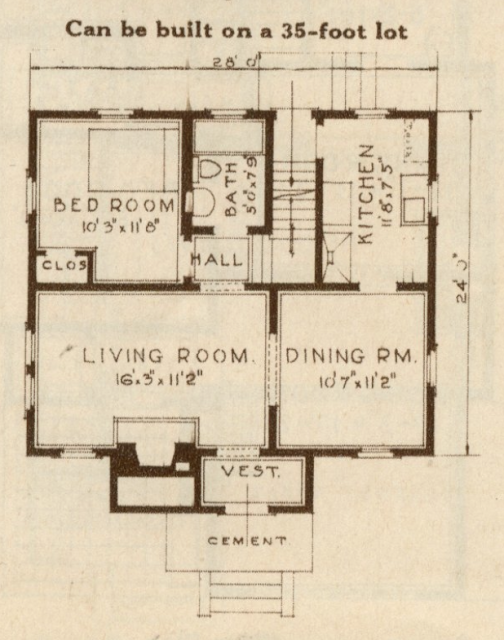 This was another model (like the Stanford and the Clifton models I blogged about, previously), that was marketed as versatile -- you could start it off as a basic little one-bedroom home, all on one floor, and then, as money allowed, expand it to add two more bedrooms in the upstairs area under the roof. 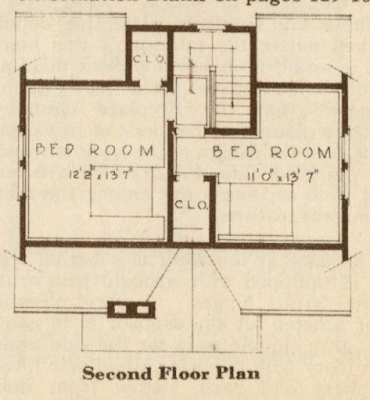 The Sears Maplewood at 19 Elm Avenue has a brick veneer, which was maybe a bit unusual for this model, in certain areas, but actually quite common, in other areas (thanks to Andrew Mutch, for that good bit of info). Often, Sears gave a different name to the brick-veneer versions of existing models, but that isn't the case for the Maplewood. For more information on this topic, read Did Sears Kit Homes Come in Brick? at the Sears Homes of Chicagoland blog.