Sometimes, houses just pop up right in front of you, and you can't help but laugh out loud at the irony.

I've been away on vacation. But, I'm back, and back to work, and today, I needed a good walk. I also wanted to enjoy some time looking for houses in the town next to mine, Webster Groves, Missouri. So, I headed over that way by car -- about a mile from my house -- and drove around the streets of Webster Groves for a while.  I found a house or two to check out, decided I had had enough of driving around, house hunting, and stopped off at the Webster Groves public library for a bit.  Since I was already parked, and there is a great neighborhood with gorgeous houses behind the library, I decided to take my walk there.

By that time, it was late in the day.  It was kind of hot.  And, I wasn't sure I really felt like a walk anymore.  So, I walked a few blocks, and took a right, intending to head back to my car.

It's amazing how you just sometimes get a feeling... and I got that feeling.  I spied a creamy dark beige house with a dark purple door (just like my house colors!), through the foliage. I could only see a bit... but, I knew.  I had stumbled upon the Gordon-Van Tine house I had been hoping to find one day! Right here in Webster Groves: a Gordon-Van Tine No. 535.

This model by Gordon-Van Tine goes by many names--numbers, usually.  It's been the subject of four of my previous blog posts.  You can read all about how this house began in the 1916 catalog as the No. 560 (with only first-floor side sun porch), and, in its various formations, is also known as the 536, 535, 535B, and Glencoe (as well as a few longer numbers), in this blog post I wrote in June of this year.  In this post, I wrote about a testimonial house that I (and others) found, in Pittsfield, Massachusetts.  In that post, you can learn more about the different changes in floor plans over the years, too. There was also a family by the name of Parsch, in Ohio, that owned this model, and sent in a testimonial about it, and you can read alllll about that family, and the house, in this post. And, finally, if you want to read about Edward C. Roberts, president of the Gordon-Van Tine company in 1916, and the No. 535 in which he (however briefly) lived, go here.


In 2010, the home was for sale (see the listing here), so I was able to find a few interior photos... sadly, they are not the best quality, but they nonetheless give a wonderful idea of the open feeling of this spacious home.

The shape of the staircase shows us that this is the early floor plan, the No. 535, because the later, 535B floor plan, had a straight staircase.  The image below shows a comparison of the two plans: 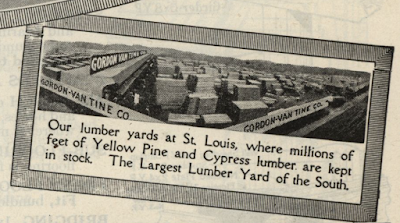 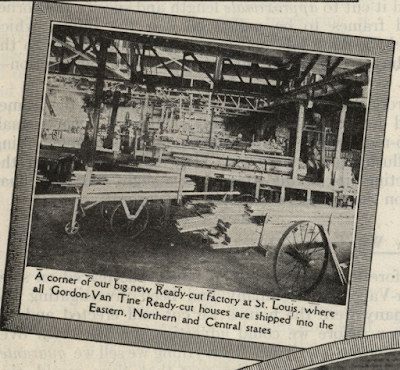 In fact, most of the lumber for a large portion of the states to whom GVT sold, came from our Saint Louis lumber yard. (2020 Edit: Information on the location of the St. Louis lumberyard owned by Gordon-Van Tine, is in the last section of this September 28, 2015 blog post of mine.)

Just a month or so ago, I said to one of my house-hunting friends, that you'd think there would be tons of Gordon-Van Tine houses around Saint Louis, since there was a plant here-- yet, I'm not running across them left and right.  I was looking more for bungalows, though, and not so much for spacious, expensive homes, like the No. 535.

In any case, Gordon-Van Tine assured its buyers -- in Saint Louis or anywhere!--that they were getting first-rate architects designing their homes: 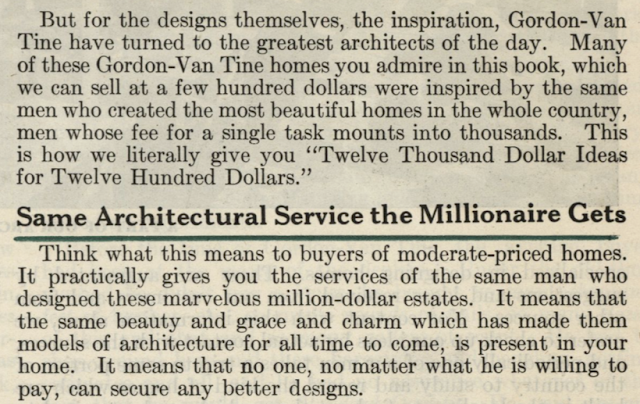 It did occur to me, that, given the year of this house (1922), the original owner might have been an executive with the GVT plant here in Saint Louis.  And, it may have been. Originally, I was not able to verify the residents at this address before 1930.  I couldn't find a 1920s City Directory for Webster Groves, and the 1920 census did not have a listing for this address -- makes sense, since it turns out that the city tax records are incorrect.  The building permit shows that the house was built in 1922.

However, in a 2020 newspaper search (I'm updating this in August of 2020), I found some clarification about the owners of homes at this address (notice my use of the plural here).

I had found 1911 and 1912 newspaper advertisements for the sale of a 10-room home at 207 Oakwood Avenue. At that time, it appears to have been bought by Henry C. Tulley, because I ran across a 1913 newspaper mention of the death of Mr. Tulley's wife, giving this address. But, the home sold to Mr. Tulley is definitely an earlier home at that address, because a 1915 newspaper story refers to a fire that burned down the home at 207 Oakwood Avenue, owned by Henry C. Tulley:
The 1915 story refers to Mr. Tulley's wife... interestingly, this would be his third wife, because the wife who died in 1913 (after they had only been married for one year), was his second wife.

Finally, in a 1926 newspaper, I found this snippet, showing that Mr. A. E. Cotton and his wife lived at this address in 1926:
And, in 1926, they put the house up for sale, as they were leaving to move to California. The listing mentions that the house is "practically new" and has a sun porch and a sleeping porch:

In February of 1927, The St. Louis Post-Dispatch mentioned, in a section of their Society pages, that Mr. and Mrs. A. E. Cotton were moving to Long Beach, California:
The new owners appear to have been Frank C. Hunt, and his wife, Eura. I found a 1930 and 1940 census listing for this address: Frank C. Hunt, his wife, Eura, and their daughter, Laura, lived here as early as 1930, and perhaps earlier than that. In 1920, they lived in nearby Maplewood, so the move must have happened sometime between 1920 and 1930. Frank was a bank teller in 1930, and his GVT No. 535 home at 207 Oakwood Avenue, was listed as having a worth of $20,000.  By 1940, Mr. Hunt had become a bank executive (despite having only an 8th-grade education!), and he gave his yearly salary as over $50, 000... and the home's value as $10, 000--- so, either his estimation of the worth became more realistic, or the years of the depression had drastically affected the Saint Louis housing market.  He and his wife included a live-in "servant" by 1940, as well (though not in 1930, according to the census): 21-year old Ethel Threlkeld, from a farm somewhere outstate in Missouri.

Of course, we don't even know if this home is a Gordon-Van Tine No. 535, because I haven't been able to document it with a mortgage, or a visit inside to check for marked lumber or blueprints. I've written before about the dangers of mis-identifying homes based solely on a "windshield survey" drive-by id.  And, in fact, even in 1919, you could order this house as either ready-cut, or not ready-cut, so we don't know if there would be marked lumber in the house at 207 Oakwood Avenue.
So, perhaps all of this excitement is for naught... because the footprint from the Saint Louis County Department of Revenue, shows a size that is only close to the GVT No. 535, not a perfect match... and, those front porch columns were not like the ones shown in the catalog. 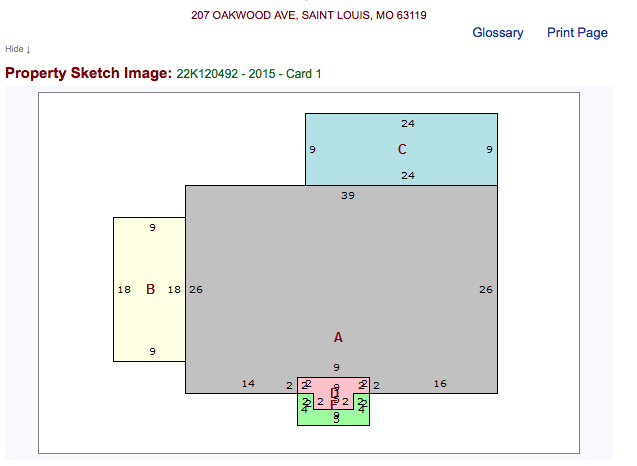 But... we'll probably never know for sure!  But, one thing that I do know: I'll not forget the day that I laughed right out loud, as I turned the corner and came upon this bigger-than-life house, sitting happily at 207 Oakwood Avenue.

For other authenticated Sears homes in the surrounding towns of Kirkwood, Glendale, and other areas of St. Louis City and County, please use the SEARCH function on the right-hand side of my blog.
Posted by SearsHouseSeeker at Sunday, August 16, 2015