We've heard the stories, and we've read the stories, but we were eager to find out for ourselves: Where are the Sears houses in Arlington County, Virginia?

We appreciate that work that has been done up to now, to try to locate all of the Sears kit houses in Arlington, but we wondered, "Where is the list?" As I mentioned in my last blog post, we had read the respected Masters thesis of Cynthia Liccese-Torres, and learned that she had discovered Sears trustee William C. Reed, during that research (he was the Sears trustee who signed off on the great majority of the mortgages in Arlington County). We had read the Darline Hannabass article, written for the Arlington Historical Society in 1993. It mentioned a number of specific houses, with just a general location, and showed a hand full of nice photos. In it, she made reference to a research project done in 1986, looking for, and photographing Sears houses around Arlington, because The Historical Society was to be giving a tour, organized by Catharine T. Saulmon, that year. I believe that group had found close to 200 houses that they believed to be Sears houses.

When our group read about all of this, we tried to get in contact with someone who might have a list of the Sears houses that these researchers had found. Unfortunately, no one whom we contacted had any information to share with us. As I've mentioned many times, our research group maintains the National Database of Sears Houses in the U.S., so we are always eager to collaborate with other researchers, and add houses to the national list.  We knew that someone who had been, at one time, connected with the historical society, was now giving occasional presentations about Sears houses, but she was unwilling, for some reason, to respond to our requests for information, over the past few years.

Then... he did some digging and realized that we had not realized that the Arlington County, Virginia historic mortgage records, were available online.  I absolutely love doing mortgage research, and was fortunate to be handed the task of seeing what else we could find, via the online records. Well... we found a gold mine.

So, for the last three months, I have immersed myself in Trust Deeds and plat maps in Arlington County, Virginia. The earliest mortgage that I found, was from 1911 (just empty lots, now), but the bulk of the houses that I found mortgages for, were built throughout the 1920s, with a few extending into the very early 1930s. I'm not the big number cruncher of our group, but I think the results we have now, are something like this:
Of those:
In addition to "still standing" houses, we found the frustrating reality that many of our historic Sears houses, have been demolished, having fallen prey, as soon as they went up for sale, to the eagerness to build bigger, newer, and more expensive houses:
Finally, we have a list of about 20 more houses that we label as "possibles". Some of these are more possible than others :). While I can't stress enough how thorough this research has been (with several sets of eyes on every house, and a multi-faceted approach to locating the houses, along with an exacting list of requirements for us to "okay" a house as the Sears model it looks like), we still sometimes find houses that are just "off" enough to be kept off of our main list. We expect to see all windows and doors in all of the right places, the furnace chimney to be in just the right spot, and the dimensions of the house to be spot on. We are concerned if an expected bumpout is missing, and just as concerned if an unexpected bumpout is present. When we can't meet those criteria, absent an authenticating resource, we place the house on our "possibles" list. So, in this case, there are about 20 more houses that we are wondering about, and a few of those might actually be Sears houses.

Here is the list!
Without further ado, let me show you the lists of what we have found. I have put a link to take you to see the house in situ, via Google Maps Streetview. Additionally, Andrew Mutch has put together 2 full, interactive Google maps of all of the locations of each house, including the model name, address, and year of construction (links to those maps are at the end of this blog post). Both my list, and Andrew's interactive maps, also tell you whether or not we have authenticated the house. Further, rather than providing a catalog image for each of these houses (as the list is so extensive), let me share with you my blog page of links to many of the Sears catalogs, online.  For further information, note that Andrew Mutch has pulled together data on the authenticated Sears houses in the greater DC area, including counties in Maryland, and presented that in this blog post. 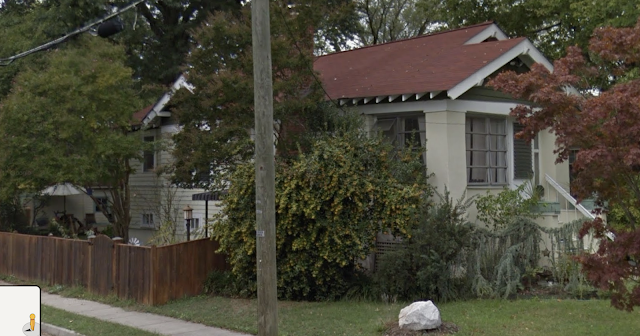 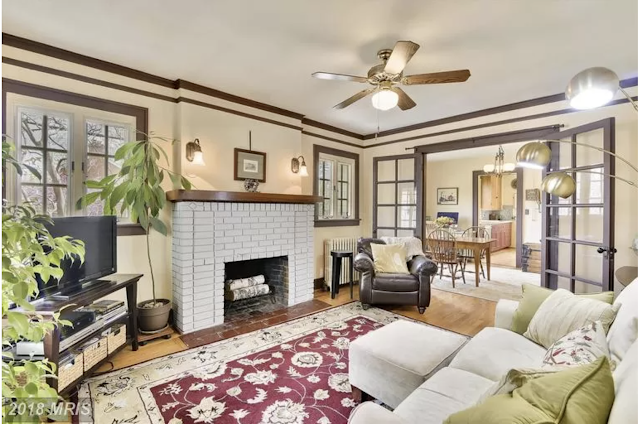 We really specialize in, and focus on, Sears kit houses. But in our travels, we often come across kit houses by some of the other kit-house companies of the era, such as Aladdin Homes, Lewis Homes, Wardway Homes, and, in this case, even McClure Homes (a smaller company, that was based in Saginaw, Michigan). We maintain lists of houses from these companies, as well, though they are not as extensive, by any means, as our national list of Sears houses. The kits of these companies are definitely out there to be found, but they are just not what we focus on. Andrew has included those that we have found, on his interactive maps, so I will provide these short lists:

Wardway Homes
Wardway homes were the kit-house homes sold by Montgomery Ward. I found only one mortgage for a Wardway house, in all of Arlington County. This seems odd, but Andrew Mutch has done extensive research in the mortgages in Washington D.C. and Maryland, and found only a small Wardway presence in those locations. Maybe Sears really had the market there, or maybe there is another trustee for Wardway that we are unaware of (we've got several on our trustees list, and I checked them all).  The one Wardway house that I found was this beautiful Wardway Suburban model, purchased in 1928 by James W Harris and his wife, Ida B Harris. Mrs. Harris was 46 at the time, and Mr. Harris was 53. He is listed as a carpenter, on the 1930 census. On the 1940 census, he is listed as proprietor of a garage. They had four daughters, Clara, Worthe, Nellie, and Helen. The Harris couple paid $4350 for their Wardway Suburban kit, which no doubt included construction costs in the mortgage.

These 15 McClure Company houses are all authenticated through mortgage records. They were bought by two developers, in 1923 and 1924. They are all versions of the Groton model, which was a single floor plan, offered with about 10 different variations to the exterior. Even though these houses look quite different from each other, their interior layout should be the same as each other.

We were fortunate to have access to the National Homes McClure Company catalog N°20, through the Bentley Historical Library at the University of Michigan (reference).

Inside, in addition to the model images, McClure included information about the quality of their product, and what you could expect, with your purchase. Here is the first page of that information, from catalog N°20:

Andrew found this ad in a publication related to textile mills: 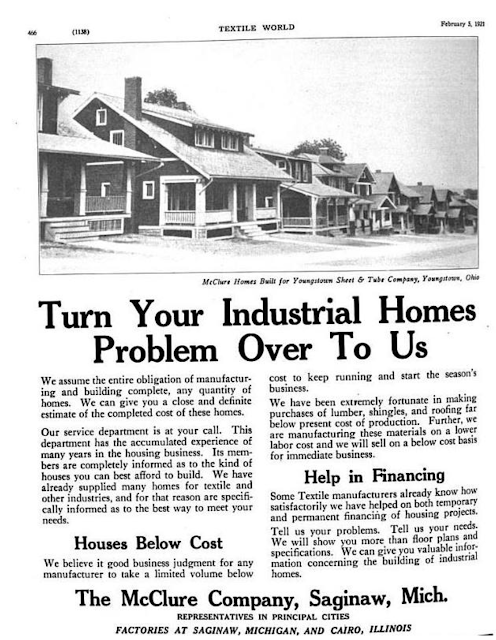 Here are two McClure Groton models, each sharing the same floor plan, but different exteriors, both on N Pollard Street in Arlington:

Thanks to Andrew Mutch for putting together these two interactive Google maps, which include all of the homes on the lists above, giving the model name, address, the build year (when known), and whether or not the house is authenticated. Click on the images below, or on these links: 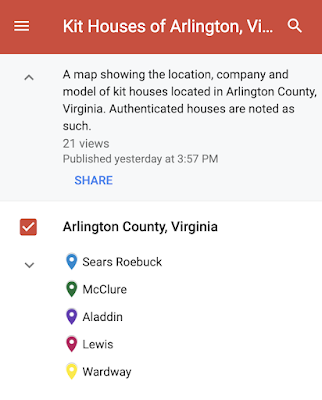 A Few Last Notes
It may be helpful for other researchers to know that we discovered that build dates given for Arlington County properties, on their Property Search website, are not fully accurate (as is often the case). The resource is really excellent for finding lots of important information, and was essential to me in my several months of researching, nonetheless. We have found, over the years, that most county property search databases contain only guesstimates for the actual build year of the houses. When we have primary sources giving the date of the mortgage, we know that's a definite, accurate build year. It is very often different from what a county website provides, sometimes by a year or two, sometimes by a decade (or more).
Additionally, if you are interested, as I was starting this research in Arlington County, I did a blog post about several Sears and Aladdin houses on 24th St S, in Arlington. You can read that, here. I intend to highlight several Arlington County Sears houses in upcoming blog posts, as well. 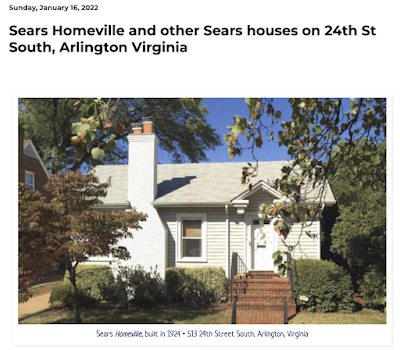 Finally, as I mentioned, above, other kit house researchers in our group, have put together well-researched documentation of kit houses in other areas of the greater D.C. region: