The Sears Ashmore model has been on our minds the last week or so, thanks to our having had the chance to tour the inside of a testimonial Sears Ashmore, in Cleveland Heights, Ohio, during our recent Meet-Up of kit house researchers. I had previously located that Ashmore, thanks to a Testimonial about the house, that the original owner, James J. Humpal, had sent in to Sears after he had built his house in 1920 (you can see my blog post about it, here ). We were able to speak to the owners when we stopped by to photograph the house in person, that weekend, and were graciously invited inside to tour the house. What a treat that was for us, especially since we rarely see the inside of this model... in fact, now that I think about it, none of us had ever seen the interior of an Ashmore in original condition, before. Those that we have on our National Database of Sears Houses In the U.S., that have real estate listings, are of houses that have been greatly modernized, and have lost the original flavor of the model.

Then, in the week after our return to our respective homes, researcher Andrew Mutch ran across this Ashmore for sale, in Erie, Pennsylvania. Finally, a real estate listing with excellent photos of an Ashmore that has kept its original Craftsman-era look. So, today's blog is being written in order to document that look, thanks to the set of real estate photos we have now.

First, let's take a look at the Ashmore's floor plan. Here it is in the 1918 catalog, the year that this Ashmore in Erie, is thought to have been built:
Keep in mind that the house in Erie, Pennsylvania, was built with the reverse floor plan, no doubt to take advantage of its position as a corner lot, to place the the little open porch, in the middle of the side elevation, where it would enjoy some light and views of the neighborhood. The reverse situating of the house would also allow the bedrooms and bathroom, which are on the opposite side of the house, to be a little more secluded from passers-by. Let's start the tour! 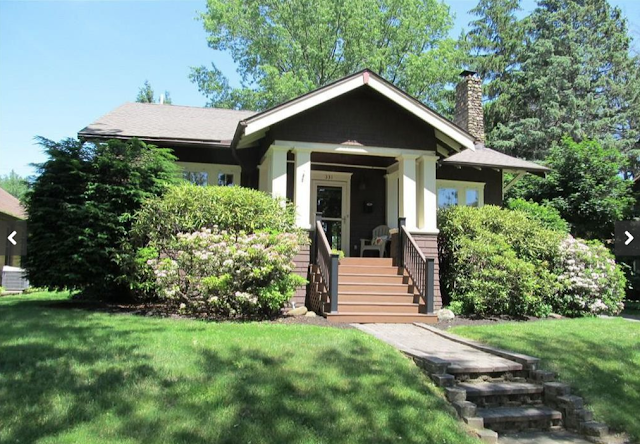 One of the sweetest aspects of the Sears Ashmore's design, is this fireplace nook, that is elevated by two steps up, with bench seating along the walls, and built-in glass-front book cases flanking the fireplace, topped with those sweet little square windows above each book case. Of course, adding to the look, is the wonderful wide trim around the windows and doors of the Ashmore. However, usually, when we think of Craftsman-era trim on Sears houses, we think of straight-across trim. But, the Ashmore, we now see, has a slight peak to the center of the top piece of each set of trim surrounding windows or doors. We were discussing this the other day, and realize that we can't think of another Sears house that uses this style trim (we may have seen it, and just aren't remembering, but it isn't shown in the building supplies catalogs, either-- in fact, let me dit that already: the owner of a customized 1916 Sears Hazelton just showed us that two of the interior doors in his house, use that trip over the door... see below). Take a look at the next three photos of the house, of the fireplace nook, the other side of the living room, and the dining room... all show that slightly peaked trim. You can see this, too, in the interior photos of the Ashmore, that are provided in the catalogs over the years that the Ashmore was offered. We discovered, just recently, that the images shown in the earliest years were replaced, beginning in 1922, with interior images from the testimonial home in Cleveland Heights, Ohio, that I've been mentioning throughout this blog... the very house! We recognized it, in part because that house has white-and-dark painted woodwork and built-ins in the dining toom. But, for this blog post, I'll show you the 1918-era catalog's interior images. 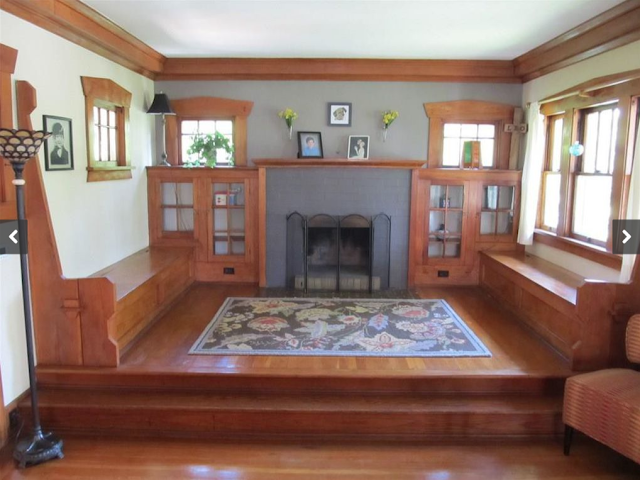 Here is this fireplace nook, as shown in the 1918 catalog, showing wood paneling 2/3 of the way up the walls, and a stone fireplace: 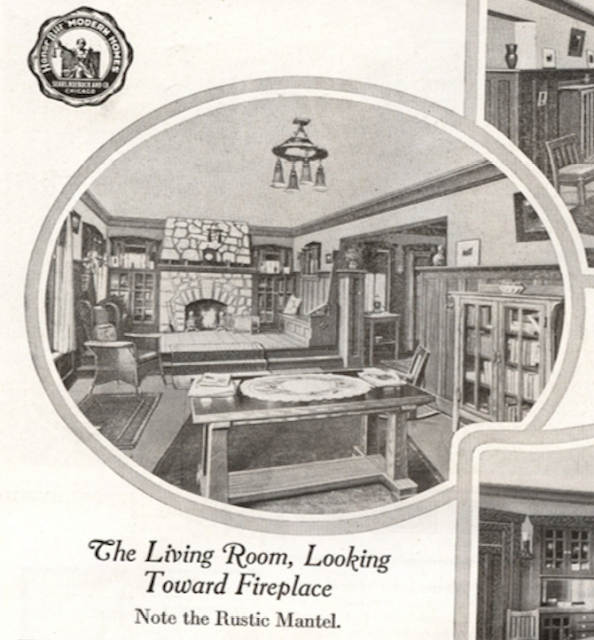 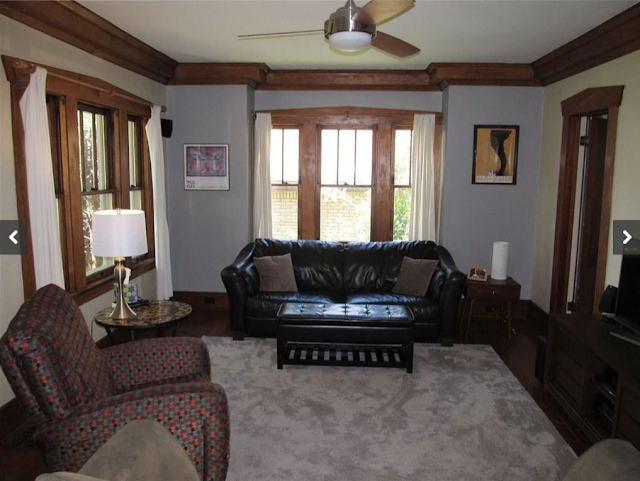 The living room, with its bumped-out set of three windows, at the far end, is also shown in the catalog: 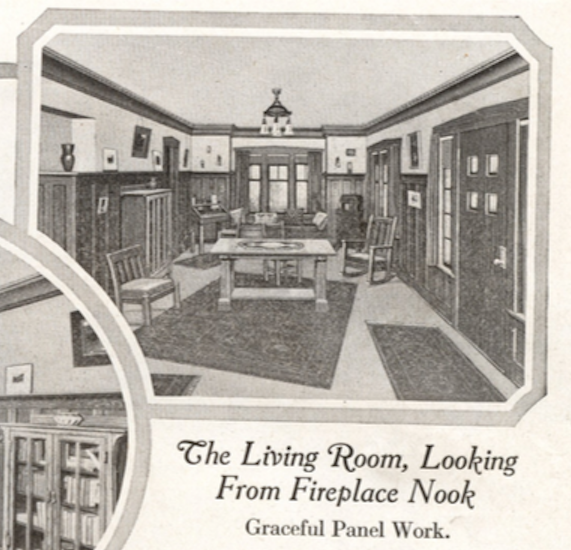 And, below, you see the dining room as it is shown in the catalog (again, with wood paneling part way up the wall), followed by a photo of the dining room in the Ashmore in Erie, Pennsylvania: 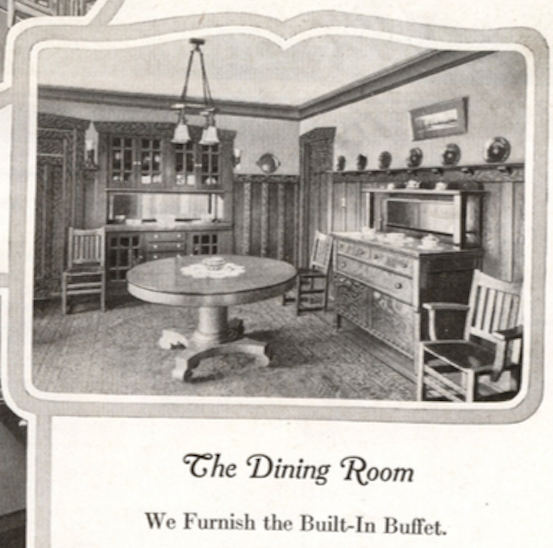 The testimonial Ashmore in Cleveland Heights, Ohio, had that peaked style of trim throughout the house, as well, though with a rich, chocolate color: 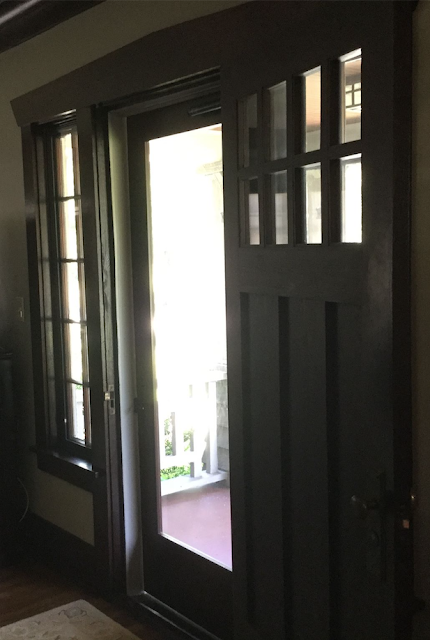 And here are the two doors in a Norwood, Illinois customized Sears Hazelton, that use that trim... just on those two doors in the house, though, not everywhere. 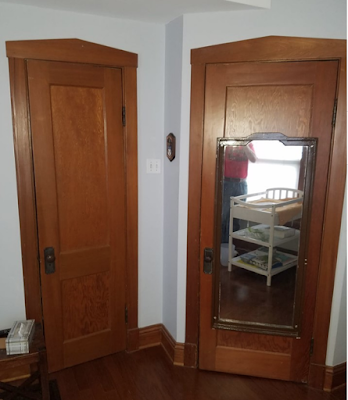 The rest of the rooms in the Erie, PA Ashmore, are in lovely condition, as well, with the kitchen modernized tastefully. That spot where the refrigerator is, is actually the eat-in breakfast alcove in the original floor plan: 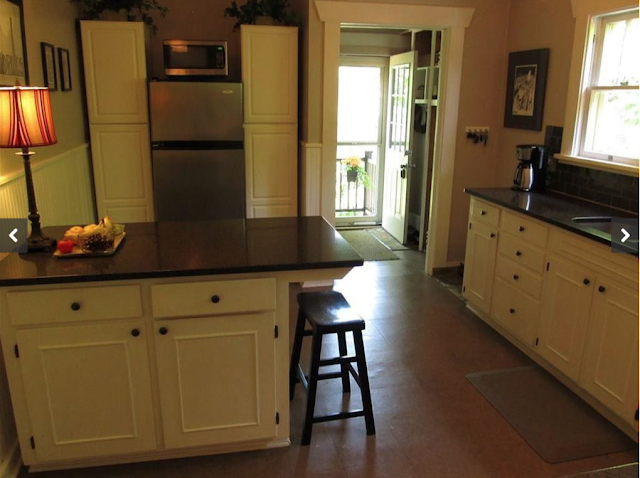 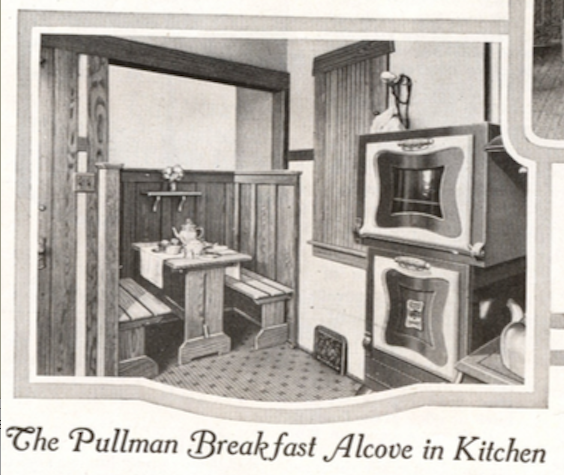 The bedrooms are spacious, with one of them on the first floor, being used as a nice, bright office and library space: 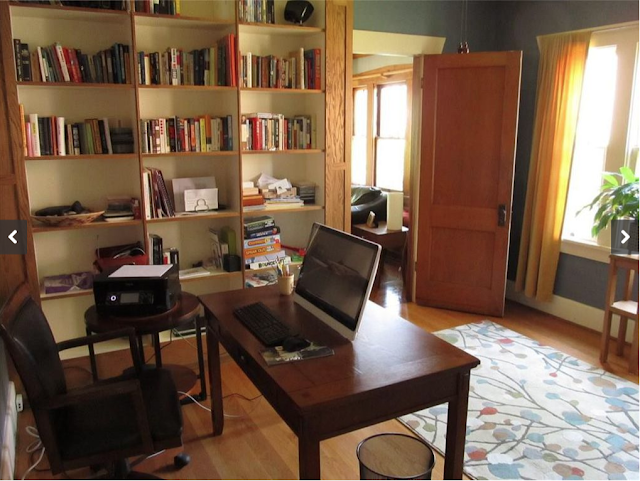 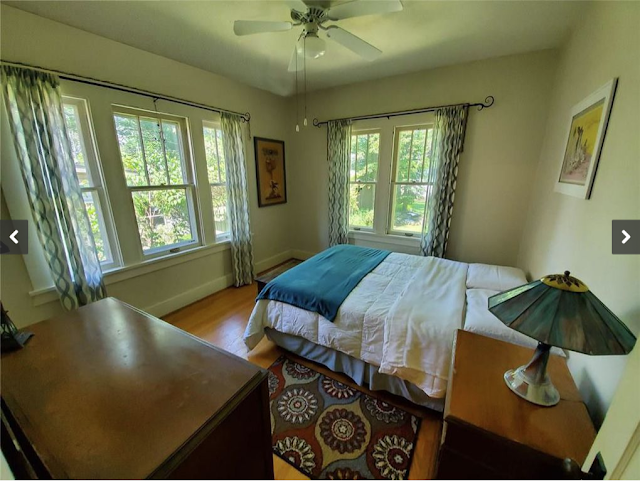 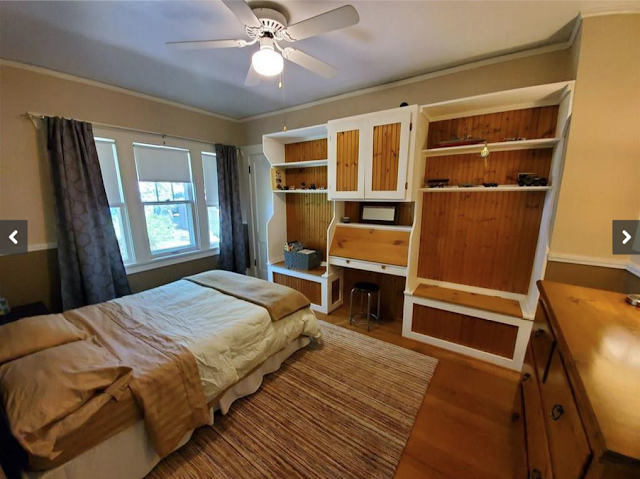 Upstairs, there is room for one spacious bedroom, and one additional space, across the way, that some owners have made into an additional bathroom (as in this house), or into an artist studio (as in the case of the Cleveland Heights Ashmore). 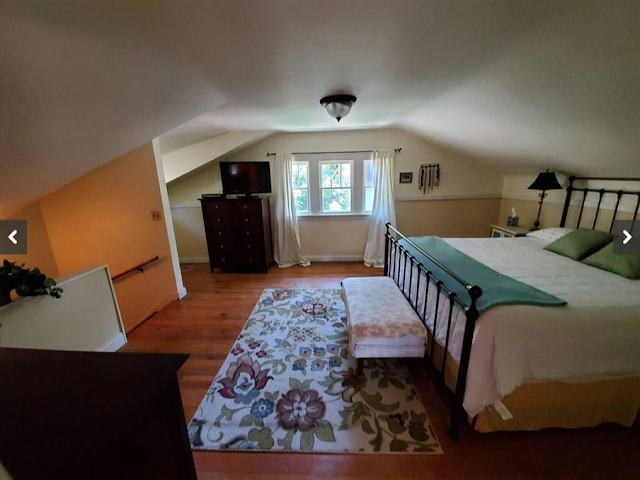 We just love the Ashmore, and I'm happy to have been able to put together a post with interior photos of one. To wrap up, let me include a few more of the Ashmore's interesting exterior: 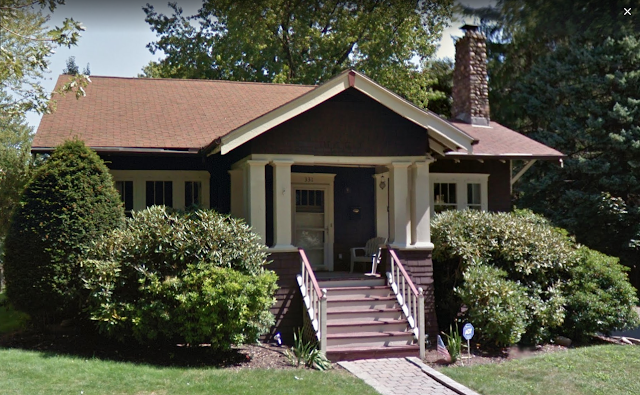 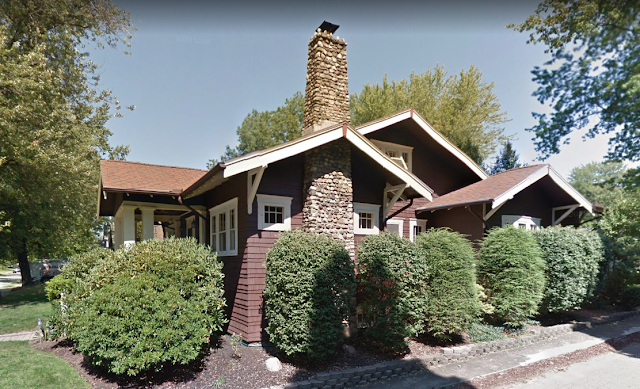 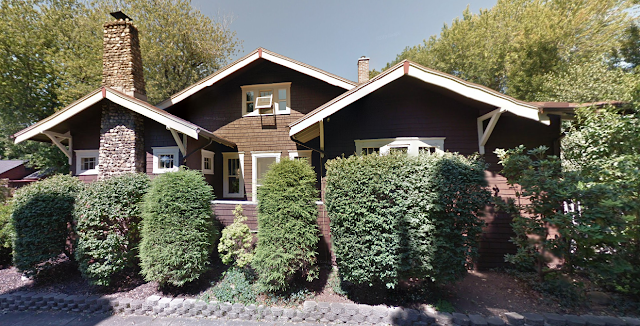 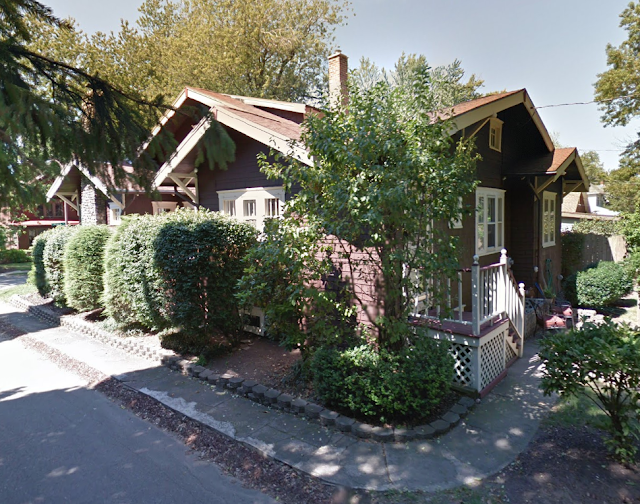 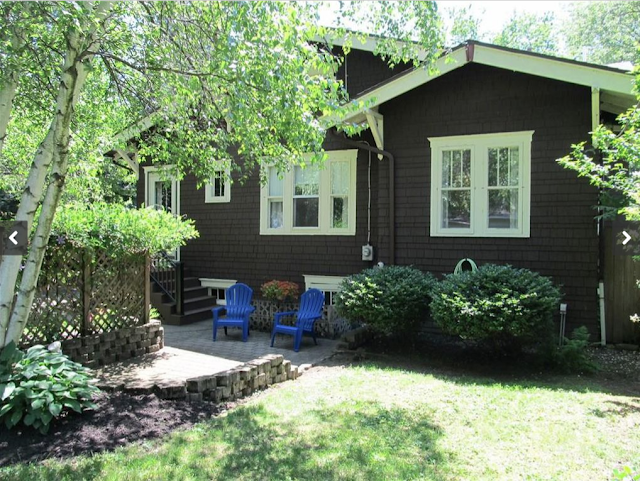 Other Sears Ashmores We've Located
If you'd like to see a few more Ashmores, I can point you to a few.

First, this beauty in Cincinnati, Ohio, presented by Cindy Catanzaro in this Sears Houses In Ohio blog post:
In that blog post, Cindy presents another Ashmore, this one in Highland Park, Michigan, and directs you to Andrew Mutch's blog post about it:
But... don't miss Andrew's follow-up blog post regarding that Highland Park, Michigan house... there's an interesting story that is tied to it (interesting, at least, to those of us who love the kit house world!).

And, of course, there's my newly-updated blog post about the testimonial Sears Ashmore, built by James J. Humpal in about 1920 or 1921, that I've referenced several times throughout this blog post:

Posted by SearsHouseSeeker at Thursday, July 04, 2019