Last weekend, I had a delightful, if short, visit to Cleveland, Ohio, to meet up with long-time Sears group friends, Cindy, Andrew, and Marie. We spent a very enjoyable day on Saturday, driving around all over the eastern side of Cuyahoga County, and saw at least 50 houses, I think... Sears houses, of course! One that we stopped by, was this Sears Columbine, on Clarendon Road, in Cleveland Heights. It was one that I especially wanted to see.

Along with visiting with each other, and driving around to see lots of houses, we each did a bit of research in the historic mortgage records of one county or another. I was in town early enough to spend two days in the offices of the Cuyahoga County Administrative Headquarters, in downtown Cleveland, where everyone was very helpful. Andrew finished up a good bit of research in Lorain County, and so, since he was in town by then, came with me on Friday to help locating and printing out the legal descriptions of the roughly 110 mortgages that I was able to track down. Records were a little tricky to find, and we feel certain that there were more mortgages than that, but I was restricted to searching the Mortgage Release files. I'm thrilled to have found as many as I did, though, because we'll be adding Cleveland area Sears houses to our national database. While we already had about 150 houses for Cuyahoga County on our list, with about 50 of those having been authenticated through Deed research by Cindy Catanzaro, my first mortgages have netted us new Sears houses for our list.

But, today, my most recent mortgage turned out to be this Columbine that we already knew of, thanks to an informative little page of the Cleveland Heights Historical Society's website, where we learned of several Sears houses in that suburb of Cleveland. So, since I had photos from this weekend, I thought I'd check a bit into this house's first owner, and show the photos that I took of the house.

Bennett Floyd Sperry
My research showed me that the man who took out the mortgage with Sears, for the house to be built on this lot, was Bennett F. Sperry, who had his own business as a piano tuner. Sears trustee Walker O. Lewis signed off on a $4,000 mortgage, on April 28th, 1926. 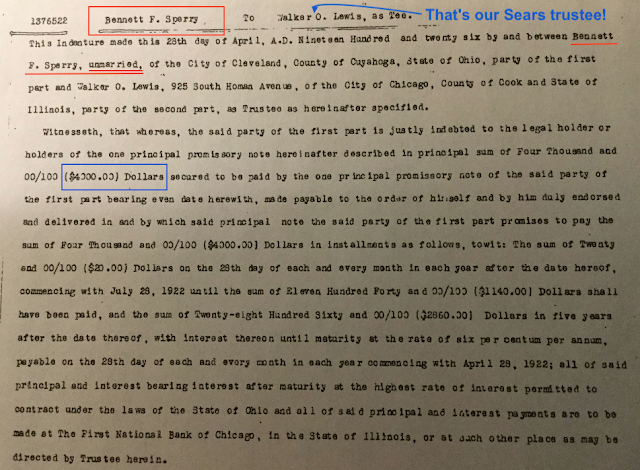 What's interesting to me -- and puzzling-- is that Bennett F. Sperry is described, in that 1926 mortgage, as being unmarried. Not so, though! Bennett had married in 1923, and continued to be shown as married, to the same woman, in the 1930 and 1940 census reports, as well as on his 1942 WWII registration card.  Using Ancestry.com, I came across the marriage listing for the joining of 35 year old Bennett F. Sperry, and 47 year old Calista VanBlarcum. Bennett had been married previously, but had divorced in 1916, and Calista... Mrs. Calista VanBlarcum... was a widow. They married on November 16, 1923:
What's also odd, is that, despite buying, and building, this house in Cleveland Heights, in 1926, Bennett Sperry's address is given as a different one, in the 1930 and 1940 census records. Of course, sometimes folks bought and built Sears houses to use as rental units. And, as Bennett was divorced in 1916, perhaps, he had a child with his previous wife, and an obligation to provide a home for that first family. Perhaps he bought the Sears Columbine for them? I don't know. The Cleveland City directories of the era (which include Cleveland Heights), that are available on Ancestry.com, do not include the second half of the directories I need to check... for some reason, they only include up to about the letter M (of last names).

Locating The House
Whenever we do mortgage research, the initial records that we find do not give us the street address of the house we want to find. What we work from, is the legal description of the lot where the house was built. If we're lucky, we have sufficient resources at our disposal to locate the subdivision mentioned in the legal description, and then something to help us pinpoint the lot. In the case of Cuyahoga County mortgages, I'm using a mix of online resources, now that I have printed-out copies of the key pages of the mortgages:
I supplement with research in Ancestry.com, and Newspapers.com, when needed, but the Cuyahoga County records are proving to be a great resource.

Since I learned that I needed to find lot number 135 in the Shaker Allotment Company's Subdivision No. 1, I went to map book volume 41, page 14, and that gave me the scan of the old map of this subdivision of Cleveland Heights. 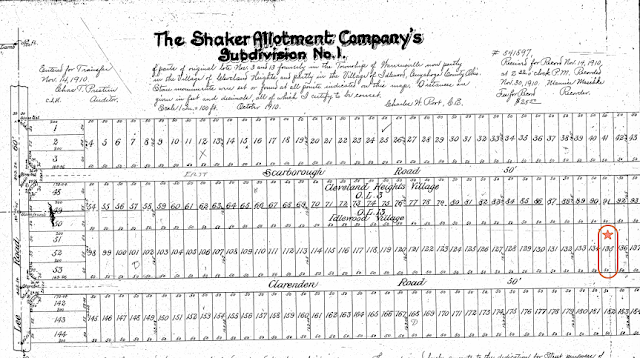 Fortunately, the street names haven't all changed, so I was able to find Clarendon Road on Google maps (sometimes, street names of a neighborhood have all changed, and I can't locate where on earth the subdivision is... very frustrating). Armed with this information, I plopped down anywhere on Clarendon Road, to just get myself an existing address on Clarendon Road. Armed with that, I am able to go to the more modern version of the maps, the GIS. However, since this county's GIS is not searchable by Subdivision names (some are, some aren't), I need an actual address to pull up the area's map. With that, I can then zoom in to the map of lots, close enough to see lot numbers. If I'm lucky enough to find my lot, I can click on it, and up comes the address (as well as the name of the current owner, and a link to the county's online Property Info resource, MyPlace).

So that, my friends, is how we find the lots that our Sears houses sit on! Well, at least, that's how we're finding them in Cuyahoga County, Ohio. Every county, in every state around the country, seems to have its own system, or, I should say, its own set of available online records. So, the search varies from one county to another, but this is the kind of information that we have to pin down.

Back To The House
All of that brings me back to the point of my blog post... to show you Bennett F. Sperry's wonderful Sears Columbine. I have to say, we're not all in love with the dark colors of the house on Clarendon Road, but I think, after seeing it in person, up (somewhat) close, that it works for me. Sometimes, we like to see lighter colors, that show off the details a little more, but I love that this house has its original wood siding. It really makes such a huge difference. Let's take a look at just a few more exterior photos (note that the house is the reverse floor plan to the catalog image, so the dormer, and the side entry door, that you see on the catalog image, are on the other side of the house... I'll flip the catalog image to show you what I mean): 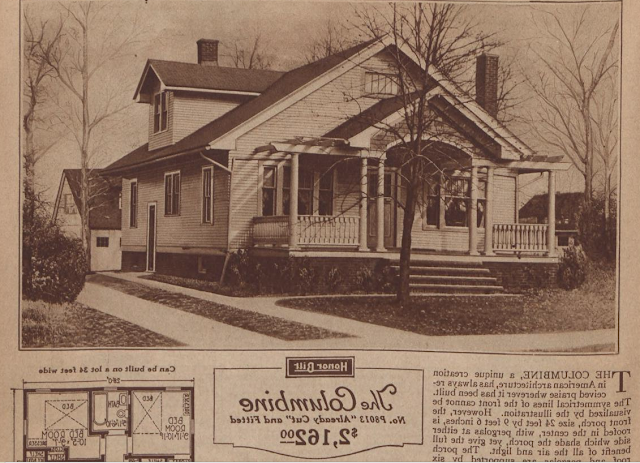 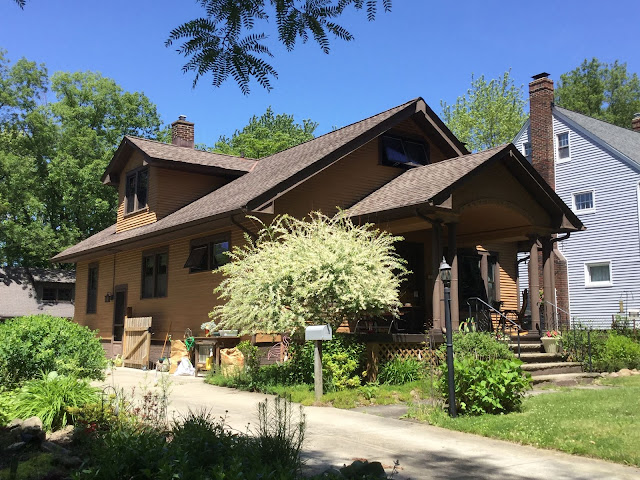 Now you can see what a good match it is, eh? The pergolas on each side of the front porch roof are gone (or were never there), but we've seen a bit of variety in the treatment of the Columbine's front porch roof.

Here's a shot from the front: 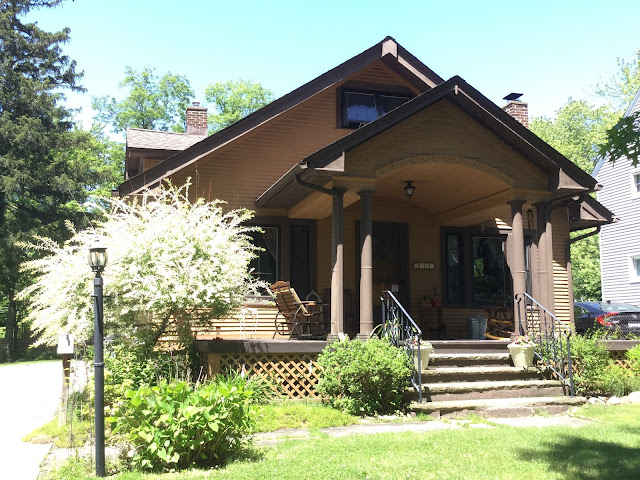 That's what I've got for this sweet Sears Columbine! I don't have any interior photos of this one. If you'd like to see more information about the Columbine model, and see some other Columbine examples, take a look at this previous blog post of mine.

We do have two Columbines with interior real estate photos, so you can take a look at these two:

We certainly do appreciate when homeowners avoid the trap of slapping on vinyl siding (it's really terrible for the life of the existing wood under it), but I know that many people find the paint upkeep of wood siding to be financially challenging. But, you have to admit... the houses look so much better with painted wood or cedar shingle siding. So, thanks, folks who now live at 3407 Clarendon Road! We love your house :)
Posted by SearsHouseSeeker at Wednesday, June 26, 2019