We've known for a while that an old bungalow-style Sears Belmont was built somewhere in Marion, Indiana, but we didn't know where. We knew, because, in the catalogs from about 1917-1920, on the page of the catalog showing the Belmont, there was a short list of places where Sears knew that a Belmont had been built. These little blurbs always start with, "Built at...." and then continue to list a few towns where the model was built. Well, the Belmont was listed as having been built at Marion, Indiana; Antioch, Illinois; and Armington, Illinois. We had found the one in Antioch, Illinois, but not a Belmont in those other two locations. Well, yesterday, eagle-eye researcher, Karen DeJeet, noticed that a house posted on the Facebook page, For the Love Of Old Houses, looked to be an old-style Sears Belmont.
When Karen checked further, she eventually learned that Marion was a "built at" location for the Sears Belmont (we call that an "advertised house"), so we have added it to our National Database of Sears Houses as an authenticated Sears house.
Now, there were two models that Sears called the Belmont. This is the first, and older, of the two. It ran in the catalogs from about 1914 through 1921.  We only have about 16 on our National Database of Sears Houses in the United States, so we were excited to see this one. These old models are hard to authenticate, too, because they were not pre-cut, and many would have been sold pre-1916, which means that they wouldn't have been labeled on any wood pieces. In fact, researcher Andrew Mutch has found two in New York that he thinks have Sears mortgages tied to them, but they have a few differences in their look, so he has not added them to our list.

In 1931 or 1932, Sears offered a brick-veneer version of their popular LynnHaven design, and called it the Belmont. You can read about an authenticated one, that's in another town in Indiana (Hammond), at this blog post of mine.


But, let's get back to our early Belmont, and take a look at a few of the years that it was offered in the catalogs. Notice how much higher the price is in the 1920 catalog, as the post-WWI era affected the price of wood, and that was reflected in the price of our Sears kits.


One thing that is rather unique about the Belmont, is the long stretch of windows on the right side elevation. In the bump-out area, we see a run of four slim windows, right next to each other, followed by a shorter pair of slim windows, right next to each other, and then a side door... all of that under the eaves of that peaked-gable bump out. The side door has its own little straight-line, flat roof overhang. If we think a house might be a Belmont, we look for this window-door configuration on the right side. Our Marion, Indiana house, has it. 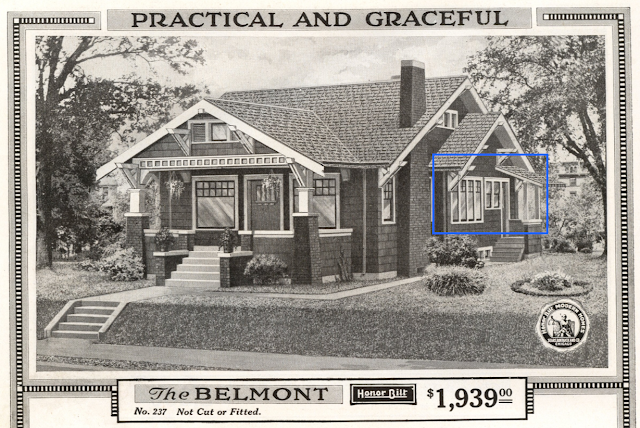 Another thing we look for on the Belmont, is the use of the Sears five-piece bracket. We want to see them placed just as the catalog image shows... and, they are, on our Marion, Indiana Belmont. We also hope to see the unique design along the lintel, that long rectangular stretch of area at the base of the front gable. That is present, too, on the Marion, Indiana house.
Interior Elements Of the Sears Belmont
We are so fortunate to have interior views of this house, and doubly fortunate that it has been beautifully cared for over its 100+ years. The interior is simply stunning. Additionally, we are able to see a few millwork elements that match what was offered in the 1915 Sears Building Materials catalog, and that is always exciting. Let's take a look (note that the photos of the house all come from the MLS listing photos, available here, on Realtor.com).

The floor plan offers a nice, spacious, long living room, and lots of windows along both sides of the house. Here are views of three areas of the living room:

Here is the front porch and entry area of the house. I'm showing this now, to show the exterior side of that Craftsman entry door. I found that offered in the 1915 Sears Building Materials catalog, and I should add that it's a style that we don't see very often in later years, with that lovely stretch of three long, slim rectangular inset areas. That nicely mimics the many long, slim windows along the sides of the house, and, in this house, the interior doors are of the same style, though with a solid upper section.


As you move from the living room, into the dining room of the house, you immediately see, of course, the wonderful Craftsman style bookcases and colonnades, that separate the two rooms: 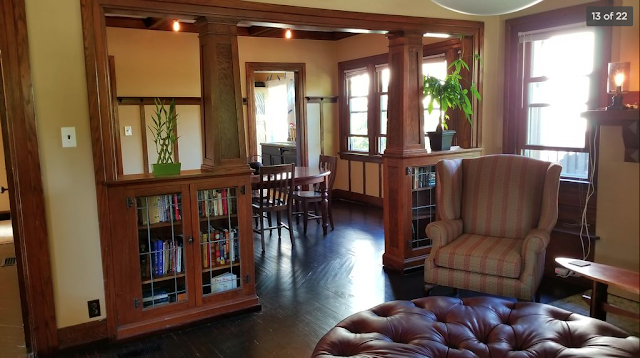 Lots of windows in that dining room, where the bumpout is, and you can see the nice back side of the book cases:
This room, off of the closet end of the living room, is being used as an office or reading room, I believe, though the Sears floor plan shows this as one of the first-floor bedrooms. You can see the door to the closet that I mentioned earlier... note that it is an interior version of that Craftsman front entry door with the three rectangular inset sections:

Even the bathroom in this house, retains its original layout, with the two windows flanking the sink and medicine cabinet. I believe that is an original porcelain tub, as well. Those were nice and deep in the era when this house was made... nothing like the little shallow things you see today in houses from the past forty or fifty years.
Let's finish up with a few more photos of the exterior of this great house: 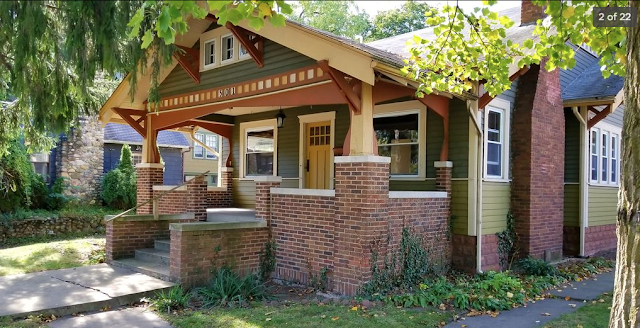 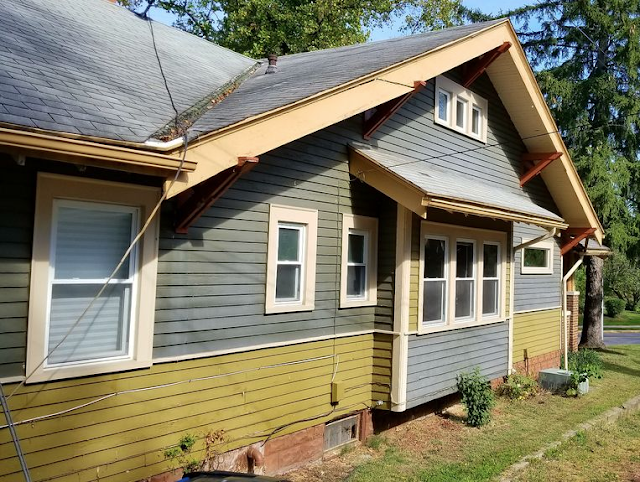 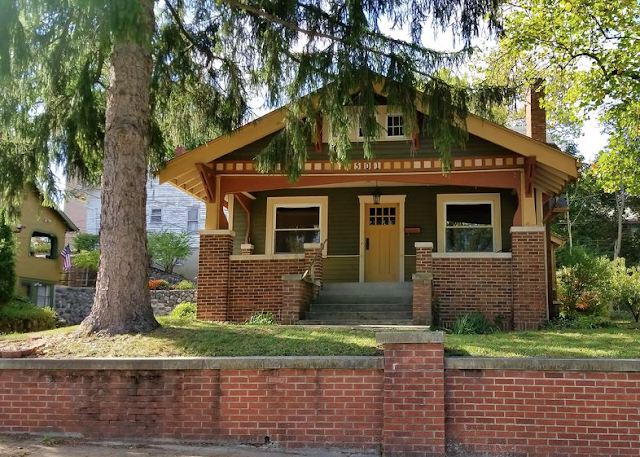 EDIT: Thanks to research by Alan Miller, of Marion, Indiana, we now know that the first residents must have been Earl J. Mason, and his wife, Grace. He found them at this address in the 1916 city directory, and here they are, listed in the 1919 city directory that I was able to see on Ancestry.com:

Mr. Mason's 1940 obituary mentioned that he was the Secretary-Treasurer of the Canton Glass Company. The 1940 U. S. census shows that Earl and Grace had two sons, Richard, and Earl J. Jr.
A Few Other Sears Houses In Marion
Other researchers in our group have found these additional Sears houses in Marion:
Sears Hamilton bungalow: 2224 S Boots Street, Marion, Indiana 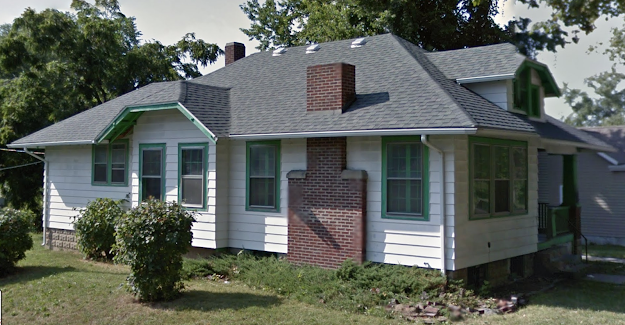 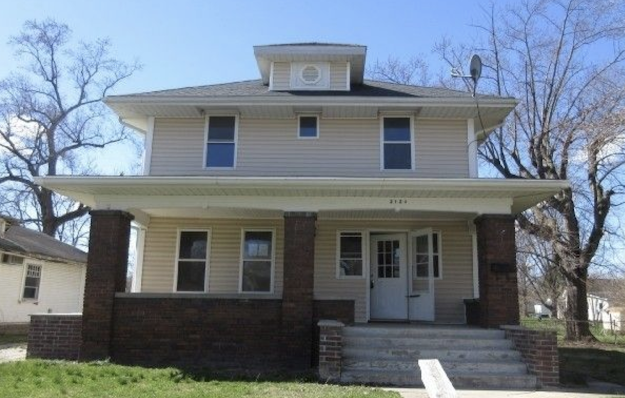 Though it needed some loving care to restore it, the real estate listing of this Woodland on S. Boots Street shows it to be full of original Craftsman woodwork.
Sears Willard at 1142 W 6th Street, Marion, Indiana 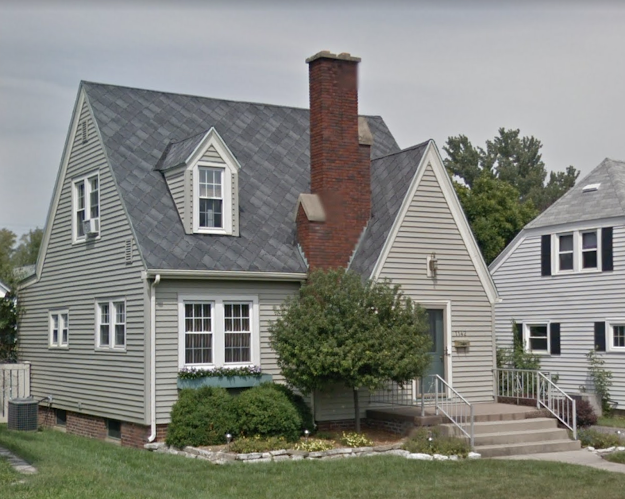 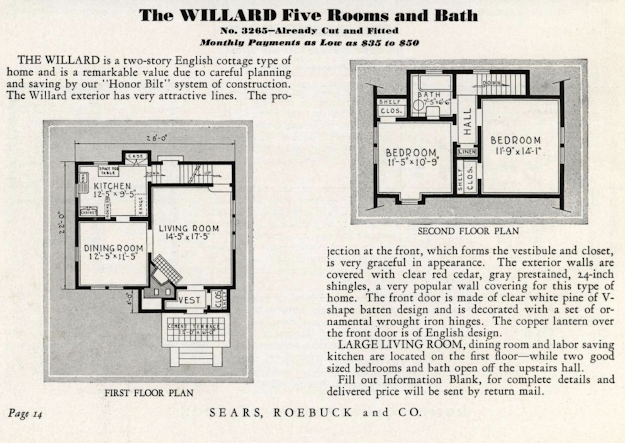 Posted by SearsHouseSeeker at Saturday, October 06, 2018