It looks like we've found a nice, big example of an early model: the Gordon-Van Tine No. 115.

The current owner of this home understands this to be a Sears & Roebuck house, an error which we've seen many times before. It's natural-- people hear that a house was built from a kit, and they only know of Sears houses, so they start referring to it as a Sears house, and over the years, that's what it comes to be known as. We've seen this, as well, when we can document the house as an Aladdin Homes company house (like this one, in Bristol, CT).

But, this big beauty, out in the middle of lots and lots and lots of land, with a big lake behind it, sits on 4 acres, according to the real estate listing.  Unfortunately, there are no interior photos, but it's for sale by the owner, and just hit the market.

This is the first No. 115 that we've found. There were two more shown as "testimonials" in the 1916 Gordon-Van Tine Standard Homes catalog, but we haven't found them. This isn't a model that we really have on our radar, to tell you the truth, since we're normally focusing on Sears houses. But, I double-checked that this house was not in any Sears catalogs, and then tried Gordon-Van Tine, since it was a likely possibility... and, there it was.
Here's A. T. Anderson's No. 115 house, shown in another catalog, with his full name, and town: Albert T. Anderson, Leland, Illinois:
What's the difference between Gordon-Van Tine Standard Homes and Gordon-Van Tine Ready-cut homes? Just that term, ready cut. This was still a house that was sold as a bundle, with the plans, and all of the needed parts for construction: framing lumber, flooring, lathing (those thin wood strips that plaster is applied to), roofing, siding, screws, nails, doors, windows, crown moulding, base moulding, door trim, window trim, bathtub, sinks, door handle hardware, hinges--everything you needed, except for masonry items, like plaster or brick (which you would procure locally). For the Standard Homes, the framing lumber was sent in standard lengths, and the builder still had to measure and cut. For Ready-cut homes, the framing lumber was pre-measured, pre-cut to size, and labeled with letters and numbers, and a guidebook was sent to explain how to put everything together. Still, it was all shipped by rail, ready-cut or standard cut, and the several box-car loads would have been picked up by the new owner (or his builder, if it wasn't the owner), using his own truck--- and, sometimes, of course, that was a horse-drawn vehicle.

But, this house was not ready-cut, it was a Standard Home . Bundled as either method, these were quality homes, made of really strong, solid wood. The homes we've found around the country are often 100 or more years old, and still standing strong. Sometimes they may need some cosmetic sprucing, as this home may need inside, but you really can't find a better home than one of these kit homes, by any of the companies.

The Gordon-Van Tine company began as an offshoot of the U. N. Roberts Lumber Company, in Davenport, Iowa:
The Standard Homes models were shipped with quality materials. Here's what the catalogs explained:
The Gordon-Van Tine model No. 115 doesn't look to have been offered after 1916, and it was not offered in the Ready-Cut catalog, so we are confident that the house was built circa 1916, as the listing says. Take a look again at how well it compares to the catalog image, except that the left side of the wraparound porch is gone (or was never added):
Here's a good side-by-side look, which you can click to enlarge:
If you know how to read floor plans, and can tell where the marks are for windows and doorways, you'll see that the right side elevation of the house, also matches what the catalog floor plan shows:
Let's take a look at what the catalog page shows. If you click on any of these, they should come up pretty big, and in good resolution:


This house is truly rural, but not far from town, and has mail service to the house, according to the real estate listing. That's a biggy, out in the middle of North Dakota, I imagine, especially in the winter! 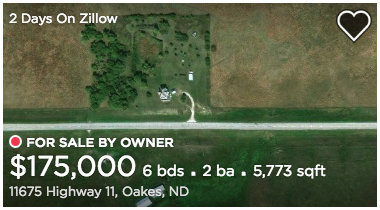 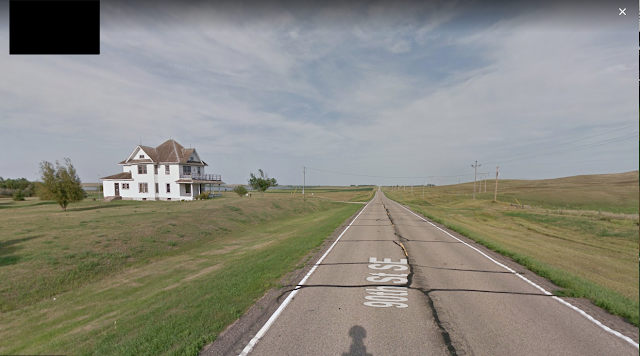 The owner has lived here for 29 years, I believe he or she said, and suggests that this might make a fine Bed & Breakfast, or hunting retreat. Or, you know... a home!
This house has six bedrooms and one and a half baths... and was last remodeled in 1972. If you're interested, here, again, is the listing: 11675 Highway 11, Oakes, North Dakota

You can be very proud to own a Gordon-Van Tine house. But, let the current owner know it's not a Sears house, okay? We love it!

More Gordon-Van Tine Homes
Gordon-Van Tine homes are favorites of mine (in part because they had a mill here in St. Louis), and I've written a number of blog posts about them, and a few about Wardway homes (sold by Montgomery Ward catalog company, but cut and packaged and shipped by the Gordon-Van Tine company):