A Sears House in Bismarck, Missouri

I ended up in Bismarck, Missouri quite by accident.

I had planned for myself, a fun little outing, visiting three rather rural counties outside of St. Louis: St. Francois, Ste Genevieve, and Jefferson. My mission was to visit the Recorder of Deeds in each of these counties, and look up historic mortgage records, to see if I could find any Sears houses. None of this research can be done online in Missouri -- you have to go in person, and you get to look through the big old mortgage index books.

In Missouri, mortgages are filed as deeds-- as Trust Deeds (also: Deed of Trust). These deeds are different than Warranty Deeds, QuitClaim Deeds, or Grant Deeds ... and this is an important distinction for those of us doing mortgage research. Why? Because it helps us know whether we need to look in the Grantor list or the Grantee list, for our Sears trustees.  (To learn the subtle difference between a mortgage and a Deed of Trust, click here.)

It's a little complicated, but the bottom line, in terms of searching for Sears mortgages, is this:


Note that you're not looking for "Sears", you're looking for one of the designated trustees that signed mortgage papers on behalf of Sears -- they changed depending on region, and decade.


To complicate matters further, in TRUST DEED states, different counties label their books differently. In Missouri, in St. Louis County and St. Charles counties, for example, the index book you need is called, Inverted Index.  In St. Francois county, the shelves are labeled, Mortgage Index books, but you actually pick up a big, huge book that is simply labeled, INDEX, and, inside it, you find two sections... one listed by Grantor name first, and one listed by Grantee name first (the latter is the section we need to look in).
If you're lucky, you come upon a county that has all of the index records in a computerized database (they're only accessible in that office, though, not via the Internet), and then you don't need to specify much more than the name you're looking for!
More complications: Deeds ≠ Trust Deeds
If you're ever doing this yourself, another very important thing to note, is this: a Trust Deed (for a "mortgage" loan) is not the same thing as the other group of deeds: Warranty Deeds and QuitClaim Deeds and Grant Deeds.  These types of deeds establish who owns the land freely and outright (Warranty Deed), or they establish that some kind of change was made to the names on the deed (QuitClaim Deed). Here's an excellent explanation, from this source: 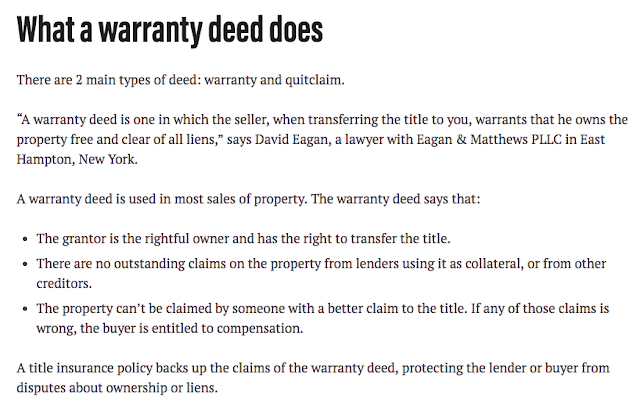 Why do we need to understand this, as historic mortgage researchers? Because THESE deeds are not the ones you need to be searching through. Looking through an index of THESE deeds, will not net you Sears trustee names. Sometimes, though, you find the name SEARS (or some variation like Sears Roebuck, or Sears & Roebuck) in these listings.... only, it should appear in the GRANTOR column, not the GRANTEE column. It's not all that important, if you happen to be using a database that includes every kind of deed -- including Deeds of Trust -- but, often times, when you find Land Records online, they may offer a Deed search that goes back far enough for our Sears mortgage years. But, if that Deeds database is only including Warranty, Grant, and QuitClaim deeds, then it won't help you.

Whew! Just be sure which kind of state you're researching in, and be sure you're looking through the correct set of books.

Back To My Adventure
So, the unfortunate news from my 200+ miles of travel yesterday, is that I did not find ONE SINGLE mortgage record, in all three counties.

But, I did find a very cool Sears house -- just driving along the road! And, the funny thing is, that I had no business being on the road where I ended up running across this Sears house.

The house was in Bismarck, Missouri (where I have never been before, in my life). But, I ended up driving through Bismarck because I took a wrong turn (and, before you say, "GPS!" take note that there was no cell coverage in this rural area). You see, fearing that cell coverage might be spotty where I was headed, I looked up my destination using Google Maps, before leaving the house, and I jotted down the directions (yup, the old fashioned way). That usually works great. I was headed to Farmington, Missouri, and, I had noted, "take 32 SOUTH when it veers off of Highway 67"... only, the first option I came upon for Highway 32, was "32 West". Uh oh. That meant that my two options would be 32 West or 32 East... and that there wouldn't be a 32 South. Damn! I tried to visualize the map I had looked at, in my head, but all I could see was that there were two highways, both headed DOWN on the map... and I didn't recall whether 32 was left or right of the first highway, 67. So, I took 32 West. And, I immediately pulled into a strip mall parking lot (oh my heavens, rural Missouri is SO full of ugly strip malls), to see if my Google map would work. It did, and I took a quick look, and determined that WEST was the correct direction (no, it wasn't). 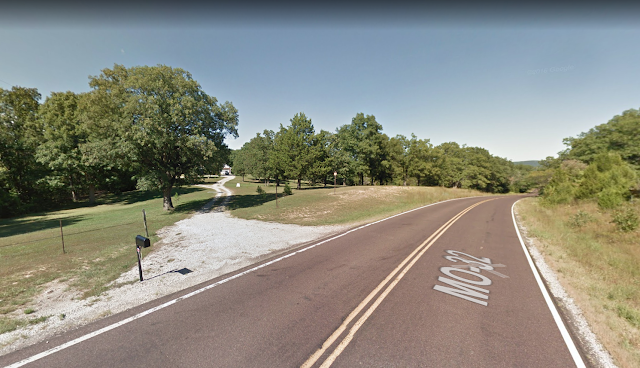 ... and I thought, hmm... this is kind of scenic! But, gee... I've been to Farmington before, and I don't remember traveling on this kind of road to get there.

After about ten miles, I came upon one of the go-through-it-in-a-flash little towns (turned out to be Bismarck), and saw this... 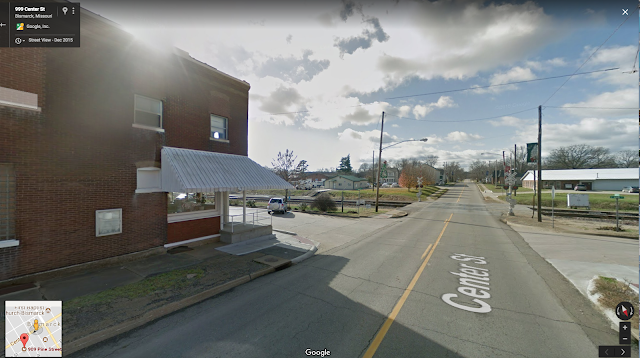 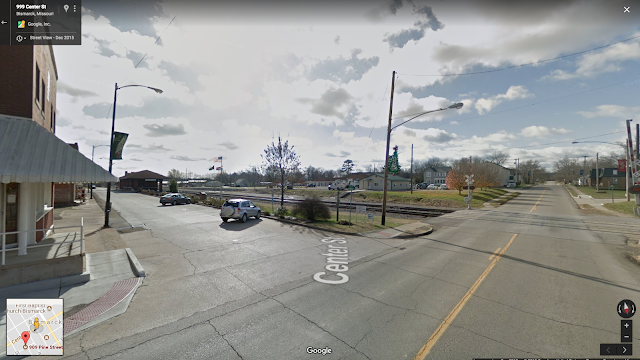 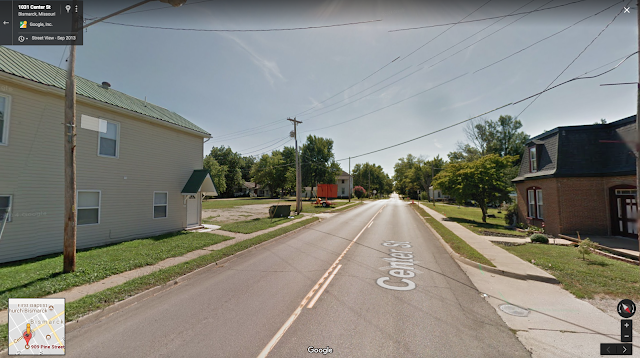 But, most importantly, what I suddenly caught in my peripheral vision, though much further away, was THIS:

Especially because of THIS!:
I wish there had been a camera on me, to catch my eyes popping open, and my jaw dropping, as I shouted out, "Whoa! Is that an OSBORN!?" I immediately turned left on the next street, Maple Street, and toured back a block to Pine Street... and drove down, and saw it: my very first, in-real-life Sears Osborn.

It's pretty much of a mess right now, I have to say. It was bought in 2012, but it's sitting there right now, overgrown, with the paint peeling off, and the porch screens buckled in, and it has ominous-looking paper signs posted on it here and there. I couldn't read them all, but I caught enough to know that I shouldn't get out of the car and get closer: "PRIVATE PROPERTY-NO TRESPASSING".

I really, really, really hope that the new owner is going to do something with it... but, it's six years later, and it's not looking good. Here are the photos that I took, to show its current state: 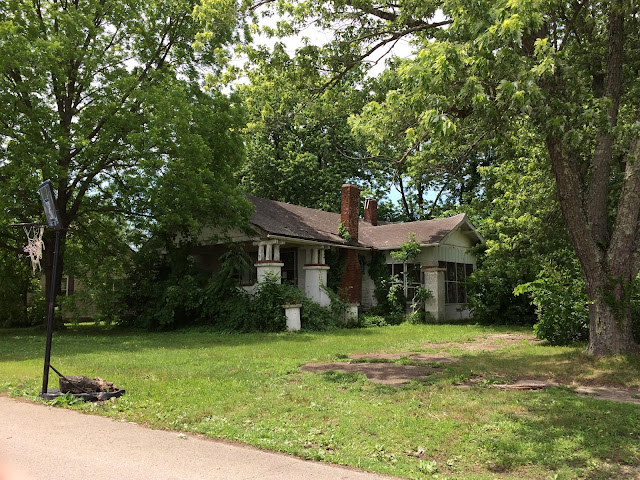 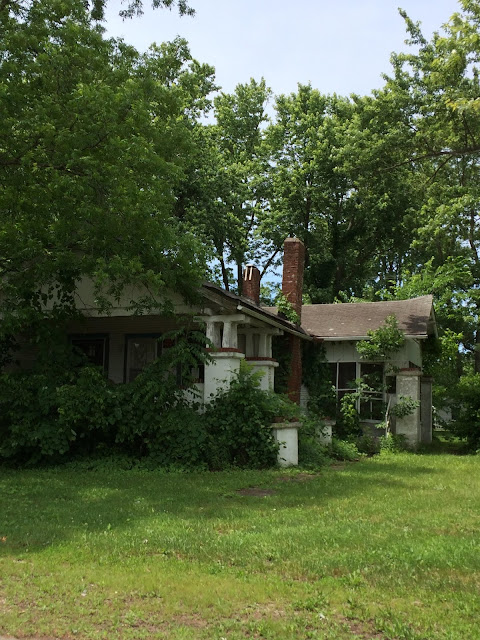 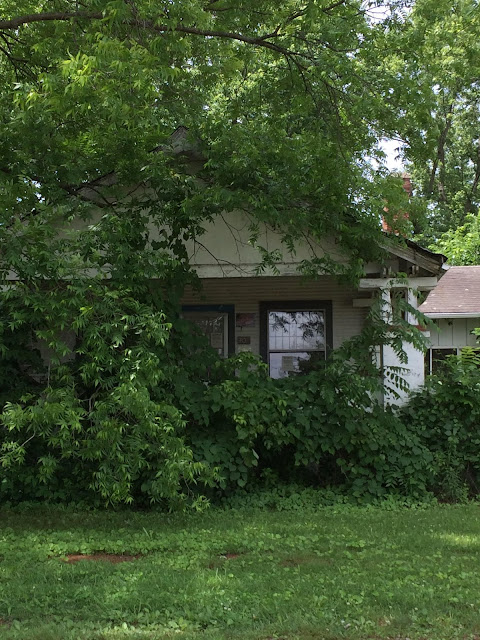 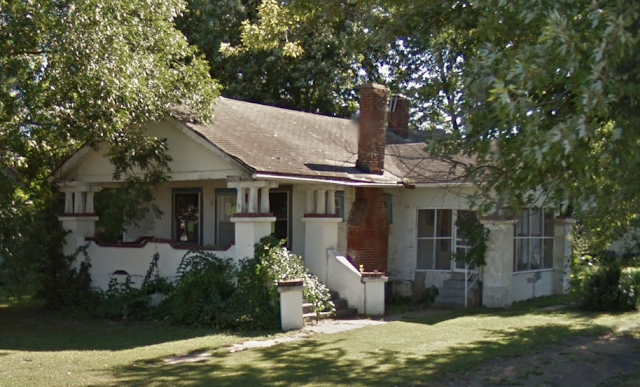 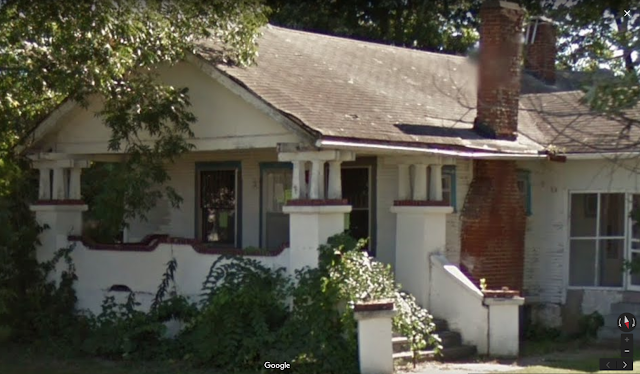 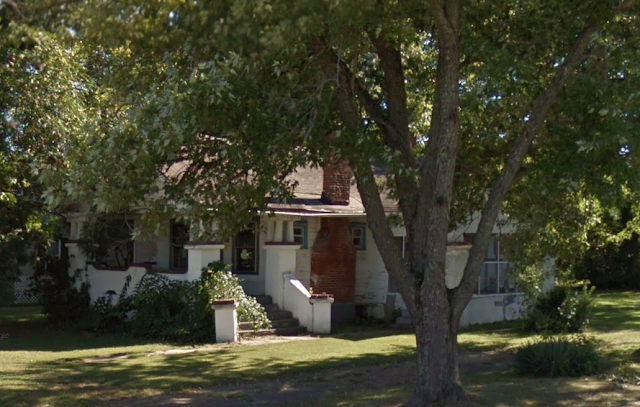 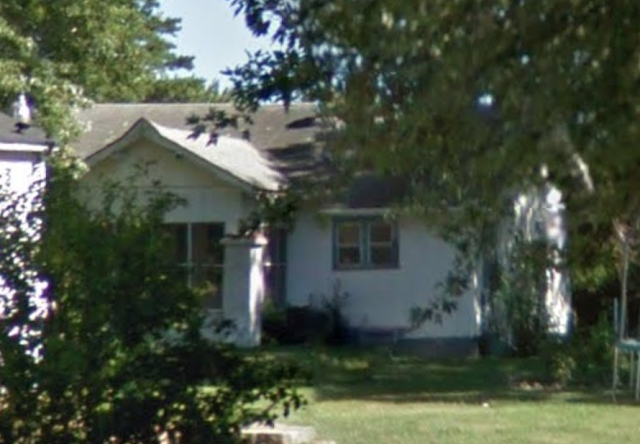 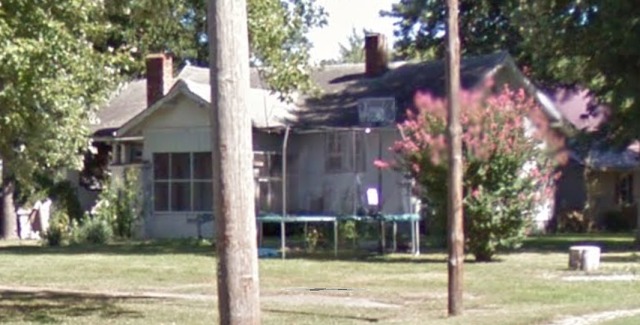 About the Sears Osborn
The Sears Osborn was an early model. It was offered first as the No. 264P244, in 1916, then became the No. 244, and finally was given the name, Osborn. It remained in the catalogs through 1929, with no changes to the floor plan (I believe).

See those exaggeratedly-pointy peaks? We've also seen Osborns with a simpler pointy peak, but this is the classic view we love. Our Osborn in Bismarck has these peaks!

The floor plan:
As is often the case in these 19-teens and 1920s homes, the Osborn was designed with a sleeping porch. This picture from the catalog, shows the sleeping porch, explaining that it was located behind the back bedroom of the house: 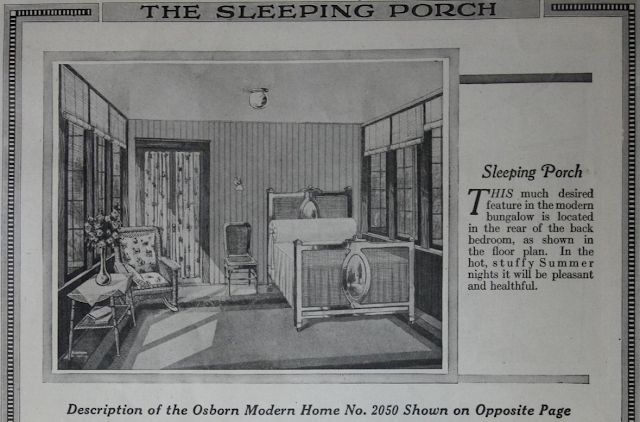 Some years, the Osborn warranted inclusion among the color pages of the catalog, as it did, here, in the 1918 catalog...
... in which we were also treated to color photos of the interior of the Osborn: 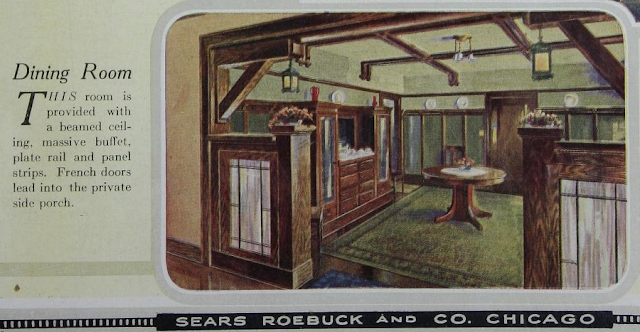 Over the years, thanks to real estate listings, we've sometimes been treated to actual interior views, like the living room and dining room of this Osborn, in Villa Park, Illinois: 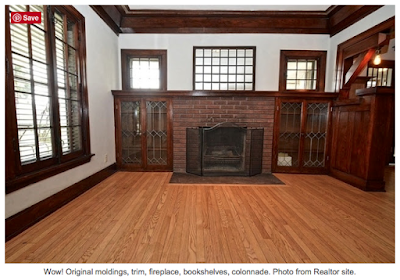 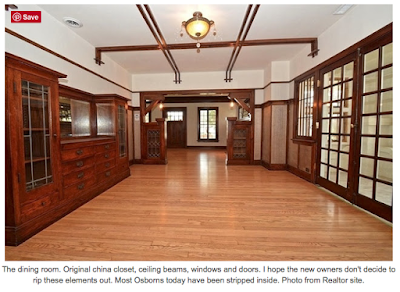 Lara Solonickne of Sears Homes of Chicagoland, put together a great blog post about this house, in April of 2017. Check it out, here.

I'm sure that the interior of our Osborn at 909 Pine Street, in Bismarck, Missouri, is not in any kind of condition like the beautiful home in Villa Park. But, I hope it's not as bad as this Osborn, in Roseland, Illinois:
Who Lived Here?
Well, I don't know who lived here -- that's the real answer. In fact, I don't know for certain when the house was built. But, I do know that the census shows that folks living all along Pine Street, in 1930 and 1940, were solidly working class. Among them there were workers for the Missouri Pacific Railroad, a number of workers in an Oak Flooring Mill, a Mechanic in an Auto Repair shop, a maid in a private home, the owner of a gas station, and one family's daughter was a grade-school teacher in the public school.
It's interesting to note that the house at 909 Pine Street was just a stone's throw away from the railroad tracks... just a block or so from the train station, in fact: 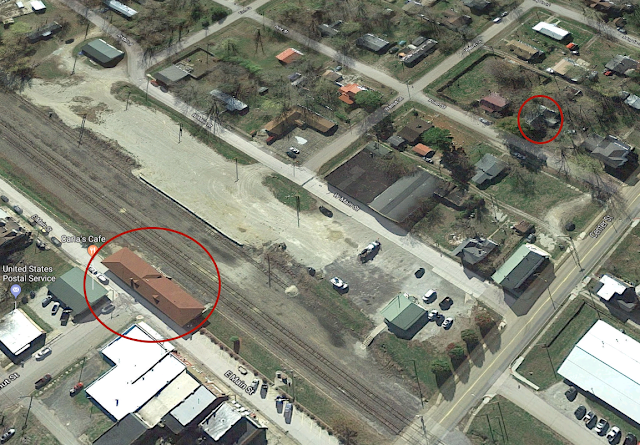 Closing Up My Adventurous Day
Of course, because of my wrong turn, I got to see this fabulous Sears house, and that was a real thrill. You'll laugh when I tell you that I didn't stop there... I continued driving west on Hwy 32, for ANOTHER ten miles. I really was thinking that I had to be going in the wrong direction (especially when I saw the sign, "Welcome to Washington County" -- I was headed to St. Francois County!), but things were getting seriously rural, and there was just no where to pull off or turn around. I wasn't able to check my iPad's Google map until I got to Caledonia... another ten miles west of Bismarck! I then realized that, when I turned off onto 32 West, I had only been about 8 miles from my real destination of Farmington, Missouri... but, now I had to first drive 20 miles BACK again to that original junction of 67 and 32. Ha! But, I got to drive past my Osborn again, so all was good.
I did do my research in Farmington, at the St. Francois County recorder of deeds. Zero mortgages. And then I hopped back in the car and headed 25 miles east, to Ste. Genevieve County, a historic town along the Missouri River, with important French founding families, and 18th century homes of these French settlers. I had a nice little buffet lunch in the restaurant across the street from the courthouse (where the recorder of deeds is located): The Old Brick House. It's touted as the first brick building west of the Mississippi, and dates from 1785. I was the only person having lunch! 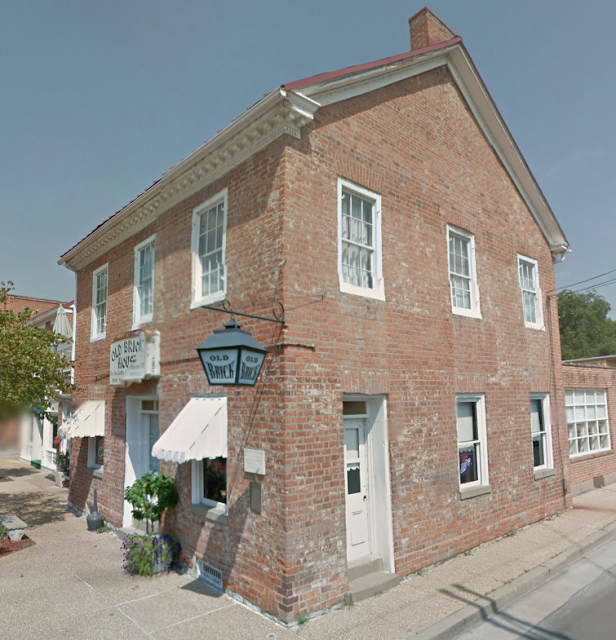 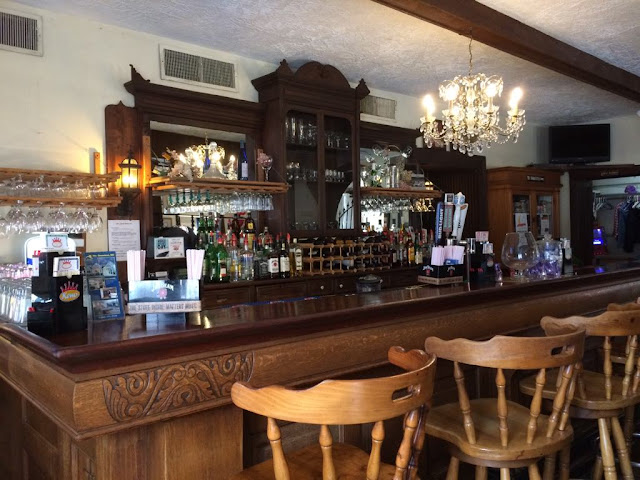 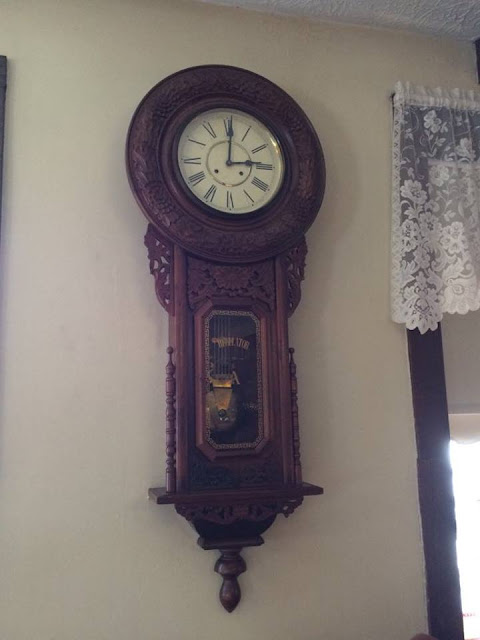 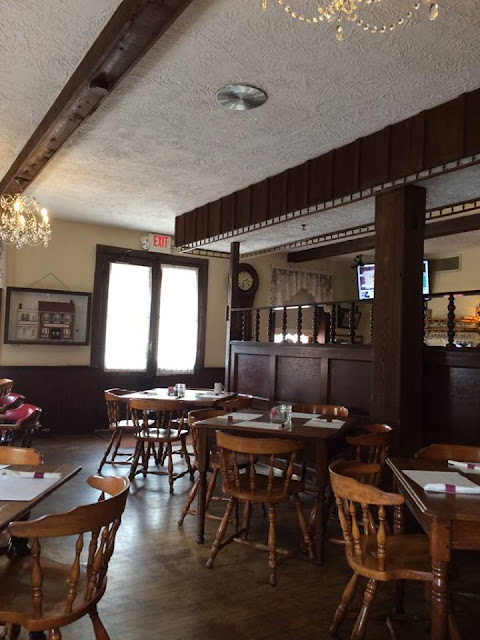 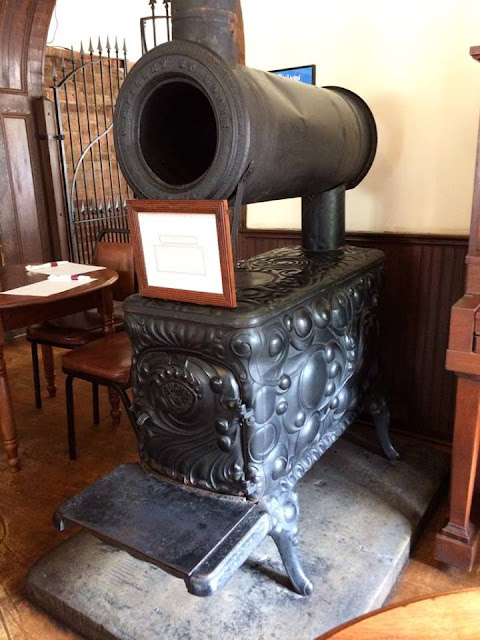 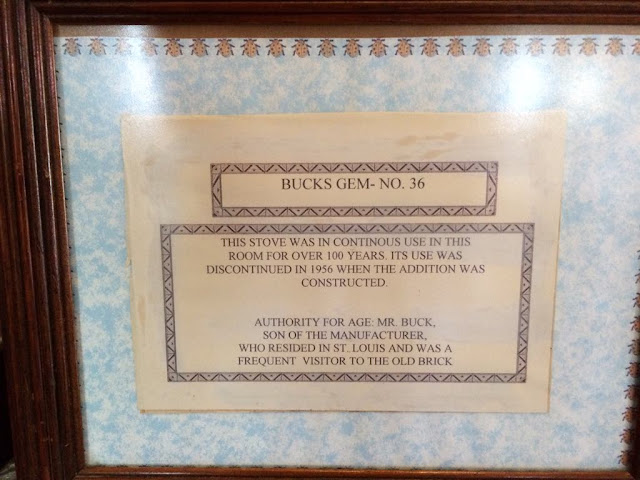 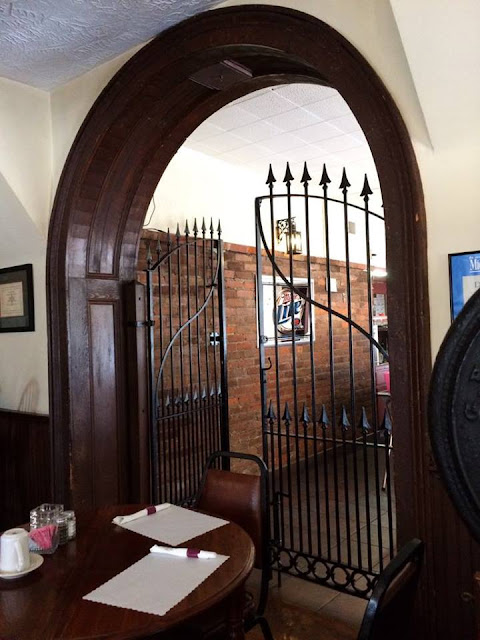 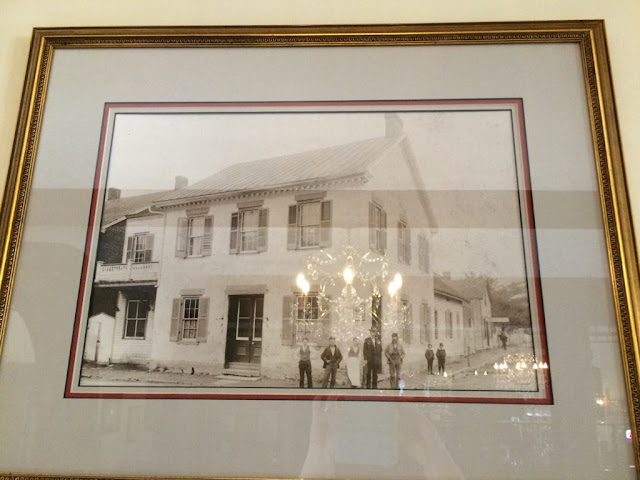 Inside the Ste. Genevieve County courthouse, I only needed about 15 minutes to wrap up my second fruitless research stop of the day. Zero Sears mortgages.
As I was leaving, I realized that I could maybe hit the Jefferson County courthouse, in Hillsboro, on my way home (with a little bit of detour). I got there 30 minutes before they closed, and had enough time to haul out the several huge index books of Deeds of Trust -- enough to show me that Jefferson County had no Sears mortgages, either.

I'm beginning to wonder if there might not have been another Sears trustee that we haven't found yet. If we find one, I'll let you know!

Posted by SearsHouseSeeker at Tuesday, June 05, 2018