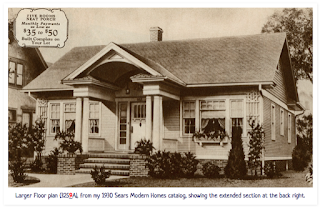 This is the testimonial home of Frank August Ohlson. I saw mention of Frank's Sears house in Rebecca L. Hunter's book, Putting Sears Homes On The Map, which lists locations for all of the testimonial and "built here" Sears homes mentioned in the Sears Modern Homes catalogs. Frank Ohlson's listing simply said, "house", so I assume that the testimonial didn't specify what model Frank had bought. But, here it is: A Sears Crescent, and he bought the larger of the two floor plans.

Sears had two sizes and floor plans of the very popular Crescent model. This larger floor plan had a back extension off of one side, where one of the bedrooms was located (the other bedroom is at the front of the house, on that same side of the house). The larger model also has three columns, instead of two, on each side of the front porch. You can see that clearly on this house on Chapman Street, in New Britain, Connecticut.


On the floor plan, you can see that three porch columns are shown, and you can see the extension for the back bedroom. This floor plan is 34 feet wide, and 36 feet deep on that longer side:
And, here, a close-up view of the front porch, indicates the three columns:
The smaller of the two floor plans has only two columns on each side of the porch. While it is also 34 feet wide, it is only 24 feet deep, on both sides. On the larger floor plan, the secondary entrance is in the back, off of a little porch, behind the kitchen, but this smaller floor plan has the secondary entrance on the side:
Frank August Ohlson lived here with his wife, Anna (the former Anna Pauline Swanson), and their little boy, Frank E. Ohlson, and little girl, Dorothy. It looks like Frank and Anna built their house in 1928, as that is the year given on the tax records, and 1929 is the first year that the New Britain city directory places them at this address. The 1930 census puts them here, and shows that Mr. Ohlson had been born in Sweden, and arrived in the U.S. in 1907. Mrs. Ohlson was born in New York, though the 1910 census puts her living with her family right here on Chapman Street (though at a different address). Though I didn't find any newspaper mention of a death, I noted that there was a new Mrs. Ohlson in the 1940 census: Lydia Ohlson, who was a few years younger than Frank (Anna had been a year older than he).

Here is the page from Rebecca Hunter's book, with the mention of Frank Ohlson's house: 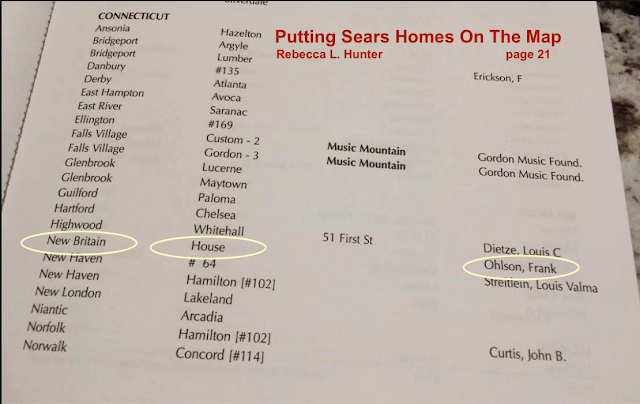 I was able to find a real estate listing for the Ohlson house on Chapman, so here are a few more views, followed by a Bing maps view with nice, orange autumn leaves:

Posted by SearsHouseSeeker at Sunday, November 12, 2017