Thanks to a reader of our recent article in the Pittsburgh Post-Gazette, by Stephanie Rittenbaugh, with photographer Stephanie Strasburg, I learned of one new Sears house in Sewickley, and then checked out a tip to look in this neighborhood of Edgeworth, where I discovered this fabulous Elmhurst, on Edgeworth Lane. This suburb of Pittsburgh is called Sewickley, but the neighborhood is known, more specifically, as Edgeworth.

The Elmhurst was first offered in that 1929 brick supplement, and continued to appear in the catalogs until at least some of the 1933 editions.

A key element to look for when identifying the Elmhurst, is the set of three pointy dormers along the roof line of the left side elevation of the house. Through the trees in this neighborhood, you can just make out the dormers:

In the 1929 brick supplement, Sears lists all of the supplies that would come with the kit-- but, they make a point of reminding buyers that they did not ship plaster, cement, stucco, or brick. Those were to be obtained locally, and I understand, that Sears would arrange that for you with a local supplier.

The standard choice for door hardware for the Elmhurst, was the LaTosca design, but I have seen an Elmhurst in Secane, Pennsylvania, that looked to have the Narcissus design hardware. Our house here in Edgeworth might have either of these two Sears door hardware choices.


Our Edgeworth Elmhurst has the customized feature of a tuck-under driveway, which required that the right-side elevation of the house be extended to cover that area:
Who Lived Here?
I'm not 100% sure who first lived in this house on Edgeworth Lane... in part because I'm not certain of when it was built. The Allegheny County assessor's real estate records give a 1930 build date. While that's possible, I have to say, once again, that Pittsburgh area build dates almost all seem to end in a 0 or a 5... and have often been found to be wildly wrong. We think that they are mostly all just guestimates. So, since I did not see this house address on the Edgeworth Lane section of the U.S. Census for Sewickley, and I didn't find a mention of any owners until about 1935, I'm thinking that it may have been built as late as 1934 or 1935, by Robert H. Denehey, and his wife, Alma Wahl Denehey.  We know that they lived here in 1935 (thanks to the Pittsburgh City Directory of that year), and that they moved to the Pittsburgh area in 1934 (thanks to a Harrisburg Telegraph newspaper article in June of that year) and that Robert was a Publicity agent for the Pennsylvania Railroad. They had moved to Sewickley from the Philadelphia area, with their daughter, Mary Alma Denehey.


The Deneheys married in November of 1916, and, in 1917, the Harrisburg Telegraph announced the birth of their daughter, Mary Alma Denehey.
In September of 1936, the Pittsburgh Press posted this about Mary Alma Denehey, saying that she was graduated from the Winchester(-Thurston) school, and then, later in the year, posted that Mary Alma was headed to Briarcliff Junior College, in Briarcliffe, New York.  Mary later married, and became Mary Alma Denehey Comer. 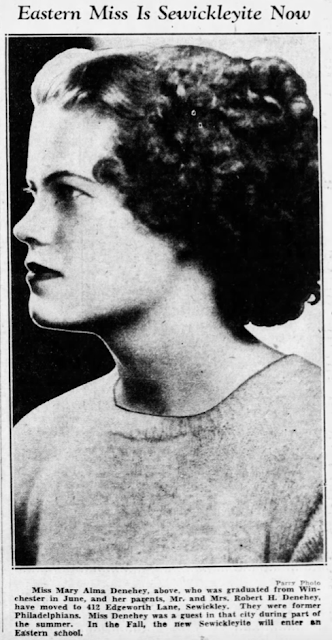 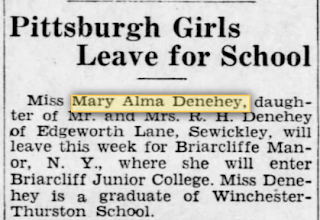 Unfortunately, a family tragedy hit on the night of Mary Alma's graduation in June. Her grandfather, William R. Denehey, who was in town with his wife for their grand-daughter's graduation, suffered a fatal heart attack in the Denehey home on Edgeworth Lane. The others had gone out for a drive, and, upon their return, found the elderly Denehey unresponsive on the floor of the living room.
Other Sewickley Sears Houses
One house usually leads to another: so far, we've found, in Sewickley, a probable Crescent, Glen Falls, Newark, Puritan, Vallonia, Sherwood, and Stratford (the brick Mitchell ).

You can check out the list of all that we've found (with links to see many of them), on this blog post at Kit House Hunters, by researcher Andrew Mutch.
Posted by SearsHouseSeeker at Saturday, September 09, 2017