In the 1924 Sears Modern Homes catalog, there is a testimonial by James J. Humpal, reporting back to Sears to let them know how much he loves his newly-built Ashmore. Here it is:


Using Ancestry.com, and Google maps street view, I was able to find James J. Humpal, and then his house, pretty quickly.  According to a check on Trulia, and then a double check in the Cuyahoga County real estate property files, I found that he had built his house in 1920. However, these records are not always accurate (sometimes off by a few years, sometimes by a decade or more), so a more reliable way to find when this house was first available and occupied, on Corydon Road, was to check city directories for Cleveland. Using that resource, I checked back starting in 1915, and found no James J. Humpal at this address until 1921. There were two James J. Humpals listed in 1920, but neither was at this address. Finally, in 1921, there was only one James J. Humpal, and he was at this address. Bingo! He must have built the house in late 1920. He is then listed here in 1922 through 1925 (though somehow not in 1923 --he's not listed at all), but 1926 saw James J. Humpal move to Morton Street, where he is also shown as living, in the 1930 U. S. Census, with a wife named Stella.  He appears to have worked as a carpenter.
Additionally, the current owners shared with me a copy of the original deed for the lot, signed by James J. Humpal and wife Stella L. Humpal, and it is dated June, 1919. So, they must have bought the lot in mid 1919, and were finally finished with the construction of the house by some time in 1921.

Back to the house itself:
Do you see the big white house to the right of the Humpals' Ashmore? That big house is still there today! Here it is in a current Google Maps Street view shot:
According to the price in the 1920 catalog, they would have paid over $4,500, just for the kit, not counting labor, and extras, such as the heating system, electrical wiring, and bathroom fixtures.  It looks like WWI took its toll on the housing market: only two years earlier, in 1918, the Ashmore was offered -- not Ready Cut, however -- for a full two thousand dollars less, and then, two years after the Humpals built their Ashmore, it was available, in 1922, as an "Already Cut" and fitted kit, for just over $3,600 -- almost a thousand dollars less than they paid in 1920.

The Ashmore is an impressive bungalow, and the catalog images always like to show off its very interesting side view:

I love the look of this house, and wish that the Humpal Ashmore didn't have a house to the left of it, so that we could get a good look at it, with Google Streetview, but... no... there's a tree in the way. The testimonial photo gives us a nice look, though:
At some point in the life of the house, an owner previous to the current owners, enclosed that side porch, making a very nice little sitting room off of the dining room. Here is what it looks like, now, from the outside:

I know this not only because  you can see it from the outside, on the left, but because I recently (in June 2019) visited Cleveland with some other Sears House researchers, and we were treated to an inside visit of this very house. The current owners were working on the lovely yard, and we struck up a conversation, and were then invited in. Their house is absolutely stunning inside! It has been kept very true to its original look, with a very tasteful and attractive newer kitchen installed. The breakfast nook had already been converted to use as part of the kitchen, before the current owners bought the house a few years ago.

Everyone who blogs about the beautiful Sears Ashmore, always includes the great interior images shown in the catalog--why should I be different, eh?

I don't think that anyone noticed, until last night, that the photos changed beginning with the 1922 catalog. And, the set of photos is labeled, "As built by one of our customers at Cleveland, Ohio". Now, we are currently only aware of one Ashmore in Cleveland, Ohio... there could be another, of course... but, what we noticed right away, was that this new photo of the Ashmore dining room, has a particular look that we recognized... the built-in hutch, as well as the wall paneling that goes 2/3 of the way up the wall, are painted white, with sections of the natural brown stain left, for example, on the drawers of the hutch, and in sections of the paneling. And... guess what Ashmore we just visited, has that exact same look! You bet! The Cleveland Heights Ashmore built by James J. Humpal. The current owners made a point of mentioning that it was already painted white when they bought the house, but I'm not sure if they knew that this was actually the original look in this house. Take a look:
I didn't want to take, or share, too many interior photos of the current house, as we were visiting, but I did ask permission to photograph this hutch... I hadn't intended to add it to the blog, but you really have to see how this shows that the 1922-1924 catalog images of the Ashmore interior, are most surely ones sent in by James J. Humpal: 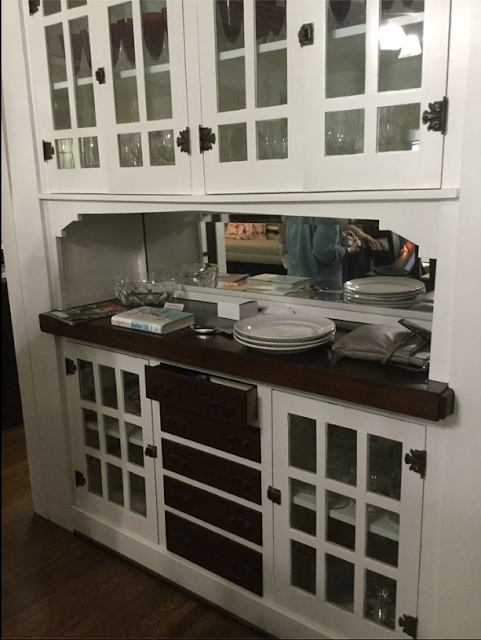 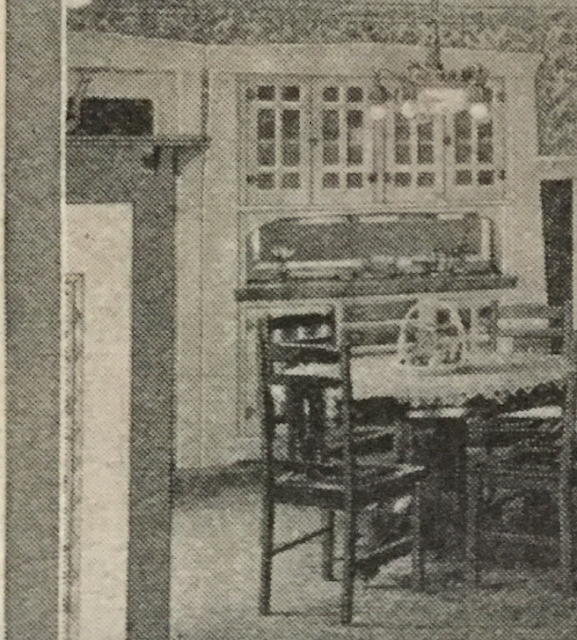 We can all verify that, yes, the paneling looks just like this.

For contrast, take a look at the interior of this Sears Ashmore in Erie, Pennsylvania:
And, though the cabinets themselves in this next image, look to be drawn, they do show the two-color door that leads from the dining room into the kitchen:
So, that was a very cool discovery, indeed!

Another thing you'll notice on the hutch, is the "Sears hinge"... well, that's what we call it. It seems to be only offered by Sears, and we love when we run across a house with these hinges. The Cleveland Heights Ashmore has these hinges both on the dining room hutch, and on the built-in cabinets on either side of the fireplace (in that fabulous little fireplace nook -- you should have seen it!): 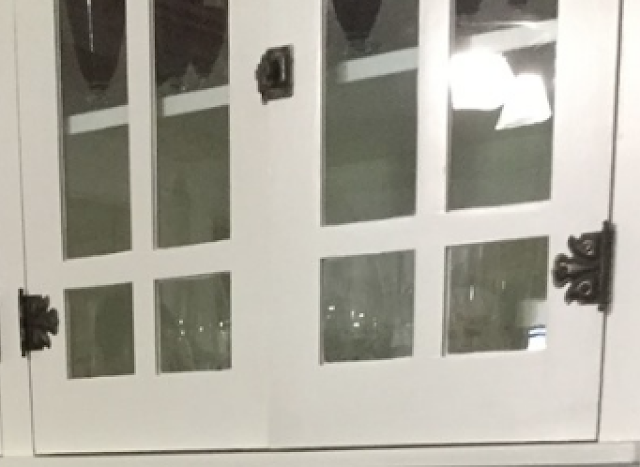 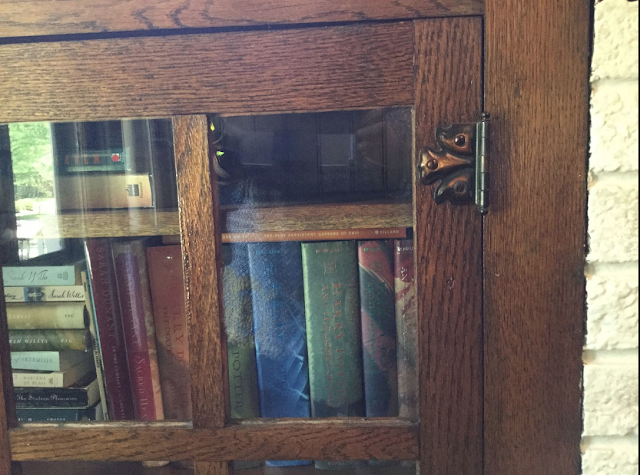 This hinge is shown on the page of the 1920 catalog, showing the Chicago Design door hardware, which is what we found all throughout the Cleveland Heights Ashmore (the hinge is particular to Sears, but the Chicago style door handle hardware is offered by most all of the kit companies, under their own name):

When a buyer purchased a kit from Sears, besides the framing lumber being ink-stamped with a letter/number combo (for the pre-cut kits), the trim pieces were always sent with affixed paper shipping labels on the back. We've seen some various designs of these shipping labels, depending on the year, and maybe depending on which Sears-owned plant shipped the labels. Sometimes, the address and name shown on the shipping label, was Norwood Sash & Door, in Norwood, Ohio, because this was the company that Sears owned, that fabricated their trim, windows, and doors. Sometimes, too, the labels mentioned Sears & Roebuck by name, and sometimes, instead, the label simply mentioned an address on Homan Avenue, in Chicago... that would have been the Sears address. The owners of the Cleveland Heights Ashmore found numerous shipping labels on trim pieces in their house:
One cautionary comment about these shipping labels: Finding one of these shipping labels on the back of trim pieces in your house, does surely mean that the wood came from Sears. However... it does not necessarily mean that the house is a Sears kit. Sears also sold building supplies, independent of their packaged kits. To be considered a kit, the house design had to have been designed and sold by Sears, and the whole "package" bought together. Usually, that means that the house matches one of the models in the Sears Modern Homes catalogs.

A Few Last Looks At The Humpal Sears Ashmore
During our June 2019 visit, I was able to get a few more exterior shots, to update this blog post: 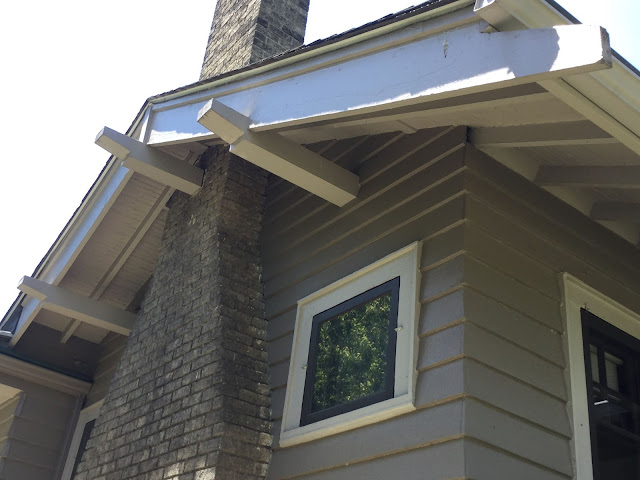 We can't thank the owners enough, for graciously allowing us into their home. It was the highlight of our weekend! And, we took their suggestion and headed next for a delicious lunch at the locally-owned Stone Oven Artisan Bakery and Café, on Lee Road in Cleveland Heights. It was time for a break, and we were not disappointed! Check it out, if you find yourselves in Cleveland Heights.


Do You Know Of An Ashmore?
We have a number of Ashmores on our National Database of Sears Homes, but I've read that there is one in north west Pennsylvania, and one in New Berlin, Illinois.  I'd love to know where! Feel free to leave me a comment if you know of the location of these two Ashmores, or any others.

Here's an authenticated beauty in Pittsburgh, Pennsylvania:
In the mean time, if you're interested in seeing more Ashmores, try: