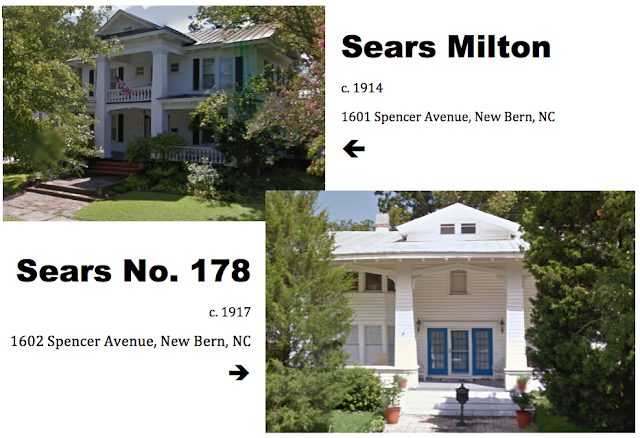 Lara Solonickne writes the blog Sears Homes of Chicagoland.  She is passionate about finding and documenting Sears kit homes, and is a dogged researcher of everything related to the history of how this phenomenon developed in our country.

While researching recently, Lara found a document that led her to a listing of historic homes in New Bern, North Carolina, including these two gorgeous, early-model Sears homes, that are very rare finds: a Milton, and its fraternal twin, the No. 178.  The document was an application for inclusion of New Bern's Ghent Historic District, on the National Register of Historic Places.  Along with these two homes, three other possible Sears homes are cited in the document: a Saratoga, a Roanoke, and a Maywood.  Because Lara limits her blog to the documenting of Sears homes in the Chicago area, I was happy to oblige by writing up these wonderful finds in New Bern, North Carolina, here on Sears House Seeker. 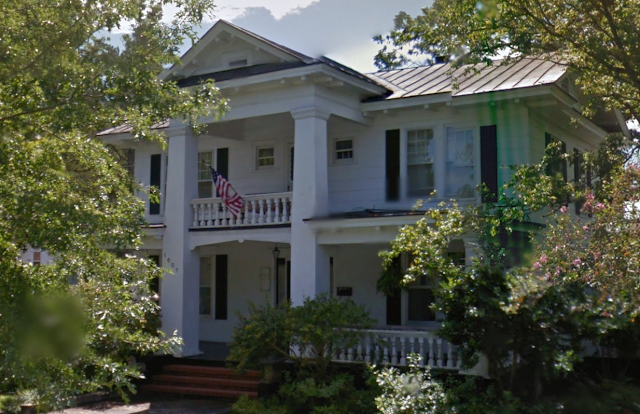 The Milton was offered in the 1914 catalog with another model that shared its floor plan: the No. 178.  For the same price, you could get either home -- same floor plan, different exterior look.  These homes, by the way, were before the pre-cut, cut-to-fit kits. The buyer received the plans and all of the necessary lumber, in standard lengths, and still had to cut the lumber to fit. 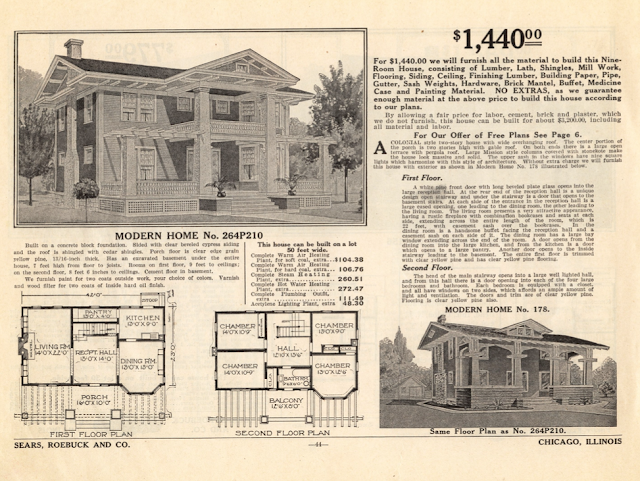 Both homes are the same, with the same room layout and window layout, but the front dormer and column options are different.
A side view of the Milton in New Bern:
According to the application for consideration of this house for inclusion on the National Register of Historic Places, this home was ordered by Charles P. Bartling, who was the first white barber of New Bern (p. 46). 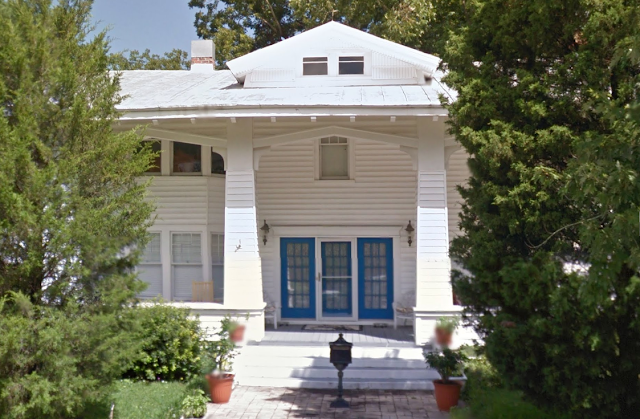 Just across the street from the Sears Milton, is this beautiful No. 178.  It was bought in 1918 by Frank G. Godfroy, superintendent of the New Bern Water and Light Department, from the Ghent Land Company (p. 33).  According to the application cited previously, it has been converted into a duplex, with two separate entrances, and an additional one-story wing was added in the back. (p. 34) 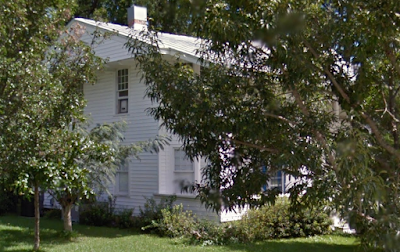 To read more about Sears model No. 178, you can click here to read a blog post I wrote about another No. 178, one that I found in Guthrie Center, Iowa.  There is another Sears Milton shown in that blog post, as well.

Sears Saratoga
On the same street as the Milton and the No. 178, sits another rare and beautiful model, a Saratoga:

It's always important to make the point that any house that does not have accompanying blueprints, or marked lumber, or purchase documents, is not an authenticated Sears house.  This house at 1402 Spencer Avenue fits all of the visual cues to be a Sears Saratoga, but there may be a "lookalike" model by another company out there, and so we can't say with 100% certainty that this home was bought from Sears. In any case, given the build year of circa 1913, this house would have pre-dated the sale of cut-to-fit kits, and so would not have any marked lumber. However, it might have shipping labels behind some of the trim pieces. The Saratoga was one of the earliest models of Sears homes, offered in the very first Modern Homes catalog, in 1908.

If you look at the catalog view below, and note the placement of windows and "bump-out" sections on the floor plan, you'll see that this home at 1402 Spencer must be a reverse of the standard floor plan:

Here's a bit of information on the early owners of this house, as well as a few comments about some likenesses and differences between this house, and the catalog model view:
Update:
This beautiful home was sold in October of 2015, and so interior photos are available, thanks to this listing on Zillow! Thanks to an avid reader of my blog, for pointing out the listing ;) The photos show that the house is just a wonderful match for the floor plan of the Saratoga --more evidence that this unauthenticated house is quite probably a Sears Saratoga. Let's take a look. (Keep in mind that the Spencer Avenue house follows the reverse floor plan of the Saratoga, so, I've flipped the floor plan drawing in each photo. ) Click to enlarge any photo : 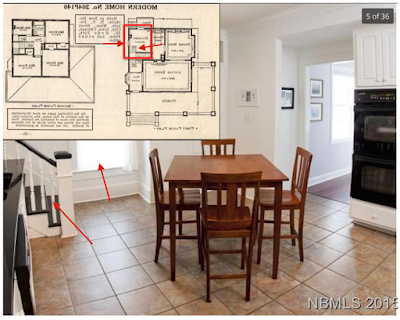 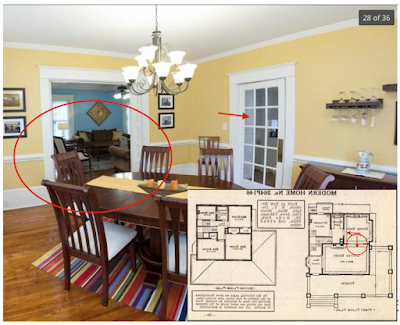 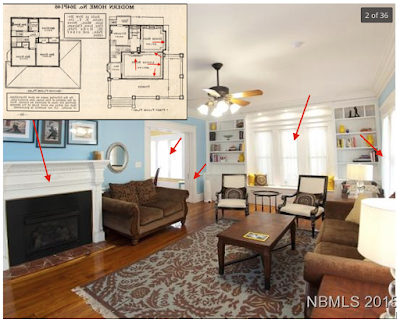 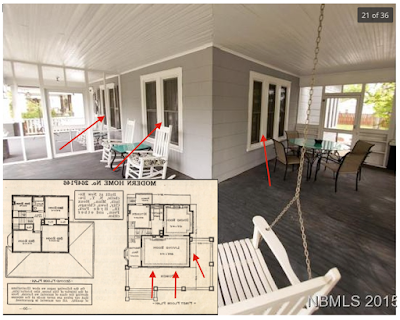 Sears Roanoke
A few houses down from the Saratoga, sits a big home from the early 1920s: a probable Sears Roanoke model.

If you compare this home to the catalog view, you'll see that the front porch columns are not the standard brick look of the catalog image, but I'm sure that changing them to wood must have been an option. You can see that the base of the porch columns is actually painted brick.  You'll also notice that the cute side porte-cochère has had its standard pergola-design roof changed to add a peaked gable roof. But, if you look closely at the center double windows above the front porch roof, you'll see that the catalog shows a space between those windows only about the size of the width of one of those windows.  The actual house at 1410 Spencer, shows a space twice that size. This is a concern for documenting this home, however, information at this link, from a realtor, states that this home was built from a Sears kit by his aunt and uncle. He gives the build year as sometime in the early 1930s, but the Roanoke was not offered much after 1922, and that is the build year given on the application for placement on the National Register of Historic Places (pages 27-28).


I found this home on a 2013 Zillow listing-- take a look at the porch columns. The two center columns (which are not present on the catalog image, but which might have been necessary if the original buyers opted for a slightly wider, enlarged version) were not of the same style as the two outer columns, and look to have been updated since then... so those center columns are not original to the build year of the home.

A few interior photos show placement of windows, fireplace, and rooms, that match the catalog floor plan:
And, information from page 29 of the application, tells us that this home may have been ordered by a teller for the National Bank of New Bern, W. Herman Bland.

Sears Maywood ?
There is one house mentioned on the application, that gives us pause. It is right across the street from the possible Roanoke, sitting at 1401 Spencer Avenue.  The application states that this house is a possible Sears Maywood. And, on first, quick glance, it looks very similar. However, there is one major differing factor: the roof of the side dormers, that are such a characteristic element of the Maywood, and of its "lookalikes" (and there are many, by numerous plan book companies).

We just can't say for certain about this house.  Was it possible to order that dormer from Sears, with a different porch roof? Not sure. Other dormers had options with similar changes. Who knows?

The Peter B. Sandbeck Book 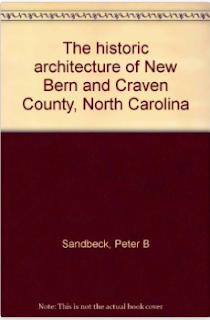 Lara Solonickne points out, in a comment below, that it was author Peter B. Sandbeck, in his 1988 book, The Historic Architecture of New Bern and Craven County, North Carolina, who revealed these historic homes in New Bern, along with a large number of other kit homes.

Posted by SearsHouseSeeker at Monday, November 02, 2015