What do Sears, St. Louis, the Olympics, and basketball history have in common? This little house in Jennings, Missouri, a suburb north of St. Louis.

On October 6, 1931, E. Harrison Powell (trustee for Sears), signed off on a $2,500 mortgage for Albert J. and Adele Kurland.  They had chosen to build the 2-bedroom Jeanette model, but that year, the Jeanette offered something new: an additional floor plan that included an entry vestibule, and that is what they chose. This was offered as Plan 3283-A.  Just two years later, in 1933, Sears discontinued the Jeanette, and replaced it with the vestibule version, renaming it The Parkside.

The Kurlands were a young couple, in their late 20s, with three little ones: their eldest, Robert, and his two little sisters, Mary Ellen and Delores.  Albert worked as a "furniture finisher" and furniture repairman for one of St. Louis' major department stores, Famous & Barr (which was owned by the May Company, which was bought out by Macy's in the 1990s), but by 1940, still living in the family's little Jeanette, he had moved on to Interior Decorator.


In the 1930s and '40s, if Albert Kurland was working for Famous & Barr, he no doubt would have been going in every day to this wonderful location in downtown St. Louis, in the Railway Exchange Building.  Sadly, this location has now closed.

Other Jeanettes and Parksides
Fellow researcher Cindy Catanzaro ( Sears Houses In Ohio) is the one who clued me in about the evolution of the Jeanette.  I was perplexed as to how this mortgage that I had, for  a house built in 1931, could be for the Parkside (which it looked like to me), when the Parkside wasn't offered until 1933.  Cindy knows the Jeanette well, as she used to live in one, and I believe that is what sparked her interest in Sears homes.

This summer, Cindy did some traveling, and stopped along the way in Middletown, Rhode Island, to snap a photo of this beautiful Parkside:
I did a little checking, and found that the Beacon Street Parkside has recently been for sale. Let's take a look at a few of the inside photos (courtesy of the Zillow listing, found here.)

UPDATE:
The owner of that cute little Parkside on Beacon Street contacted me. She loves her Sears Parkside! Here it is with a fresh new paint job:
The owner put together a great little website about the history of her Sears house. Take a look:
What Came With The Jeanette?
The Sears Modern Homes 1929 catalog shows us what came standard with the purchase price of the Jeanette: 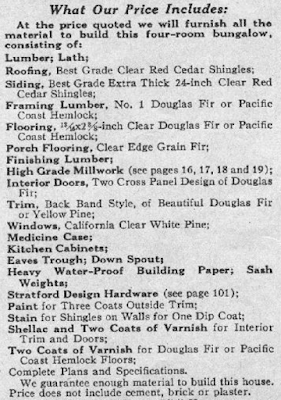 ... and what options you had for your "extras": 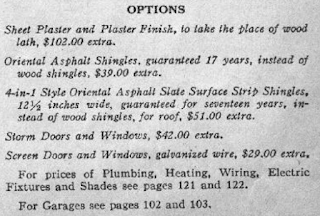 You can see that plumbing fixtures were not part of the standard price, as the customers had a few options to choose from, and that was an additional cost.  For the bathroom fixtures, they could choose from the Delmar, Corona, or Plymouth sets of tub, commode, and sink: 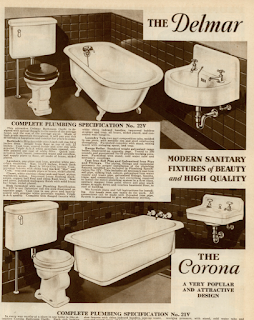 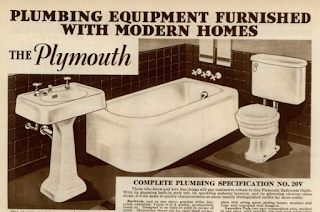 Financing Your Sears Home
Sears explained, in the 1929 catalog, that you had three options when buying your home from them. You could pay the full price up front; you could secure a mortgage through a bank, and have the bank send a special letter to Sears, showing that they would be paying Sears on behalf of the homeowner; or you could arrange a 5, 10, or 15-year mortgage directly through Sears, at 6% interest per annum. This was the option that the Kurlands chose, which is why I was able to authenticate this cute little home as a Sears home, by researching mortgage deeds for Saint Louis County.

In order to help the homeowner feel comfortable with inquiring about the full cost they would end up paying if they bought their home from Sears, each catalog included a form that interested buyers could fill in, choosing various options, and send in for a full-price estimate. This one is from the 1930 catalog:

Olympics? Basketball?
Do you follow basketball history? I don't, but, apparently, our little Blewett Avenue Sears Jeanette, is the childhood home of legendary olympic and college basketball player, Bob Kurland! I found this by Googling "Albert and Adele Kurland"... and, up came a bio about 7-foot-tall Bob Kurland, who seems to have pretty much invented the slam dunk.  In this little video clip, he is mentioned as one of the top 25 basketball players, and is said to have been the first player to have dunked in a game.

Though Bob Kurland grew up in St. Louis, Missouri, and attended Jennings High School,  where he played basketball and ran track, he was lured away for college by Oklahoma A&M (now Oklahoma State), and is considered one of the most important athletes in the history of their university's sports programs.

After college, Bob decided not to go professional, but this allowed him to be a member of the U.S. Olympic Basketball team (though it is not the case now, Olympic athletes used to be required to retain amateur status). He helped lead the U. S. team to two Gold Medal victories, in 1948 (London) and 1952 (Helsinki, Finland).  He was inducted into the Basketball Hall of Fame in Springfield, MA, in 1961.


Posted by SearsHouseSeeker at Sunday, October 18, 2015