Last week, I spent 2 afternoons at the local library, peering at microfilm in the quiet History & Genealogy section.  I was looking through the Inverted Deeds Index for Saint Louis County, from about 1915-1930, trying to find the Grantee names Walker O. Lewis or E. Harrison Powell.  I was looking for Sears mortgages, and these two names were pretty much the most common, as Sears Trustees (there are others, too).
I came home with a list of a number of names (not addresses -- the deed has names, and then official descriptions, like "189 feet south of Manchester road, lot 4 of plat 5 of the Enod B. Gentry tract"), and the intention of going back another day to try to find the actual mortgage deeds. I had only had time to find two of those that second day.

When I talked about my finds with other Sears House friends, one reminded me that I could try looking up the names on Ancestry.com, to see if I could find addresses from the census lists, or city directories. That is how I first came upon the wonderful Lexington I recently wrote about.  And, then... bingo! I was on my third or fourth name of the night, usually coming up with no address, or an address that had no house at it, when I came up with Ben Multack... and it gave his address in 1940 as 625 Evans, Kirkwood, Missouri. "I know that address!" I said to myself.... very excitedly :)

I recognized that address, because it belongs to one of a handful of Sears homes in the Kirkwood area of St. Louis that Rosemary Thornton found, and has mentioned in newspaper articles (like this one) and a blog post (this one).  It's a cool Cedars model, with a big cat-slide front gable entry, and another bigger, pointy front gable above and behind that. Very nice house. I was excited to drive by it and finally see it, a few months ago.

But, Rose doesn't usually say whether the homes she spots visually, from driving down a street (everyone calls them, "windshield surveys"), are authenticated or not.  Some of them have been authenticated, but some have not, and we just don't know.... because she doesn't say.... so how would we know, eh? We do know for certain that some of them have turned out not to be authenticated, so that kind of leaves every one in question, unfortunately. Maybe alllll of the rest of them are Sears homes, and maybe allll of the rest of them are authenticated, but... you just can't know, because there is usually no mention of authentication means, when Rose shows a house she found herself -- in a book, or in a blog post. In the case of "windshield survey only" houses (anyone's "windshield survey"), some turn out to be larger or smaller than the Sears model, and maybe to have been built a few years before Sears offered them in the catalog. Some look just like a Sears model, but maybe turn out to have no marked lumber or authenticating mortgage or blueprints.   Some turn out to have a very different inside layout, and so aren't from Sears.
Rose has commented that, of course, in those early days when "windshield surveys" were about all you could do, the amount of information you could find without visiting every recorder of deeds in the country, was limited.  So... I thought this Cedars might never have been authenticated, and I was just thrilled (thrilled!) to have found a mortgage deed, to prove that THIS Kirkwood purported Sears house, was for SURE a Sears house (it would then be the first Kirkwood one that anyone -- other than the homeowners and Rose-- knew of... because.... you know.... Rose just doesn't usually say).  And, before you choke on your midwestern barbecue or swallow your reed (sorry, that's an inside joke), let me just say that I GET IT... Rose found this house, and tons and tons and tons of others, first. She has an incredible eye, and probably a photographic memory, and has done years and years of research-- and she deserves TONS of respect for all of that. I get it. But... we'd just all like to know whether or not a home a person shows is authenticated. It's no sin to be taking a highly-educated guess... but, if that's the case... say so.

That's my opinion. And I'm sticking to it.  No matter how many apoplectic fits it causes across the Tulsa plains (I don't know... are there plains in Tulsa? Eh, who cares. Lots of hot air, though, we know that.)


But, if you look at the comments on the blog post I linked to above, you'll see that this is one house that Rose actually had authenticated, through nice, bright blue stamps on the lumber, that she saw with her own eyes (actually, she told me about the bright blue ink in an email).  Great! But, my mortgage-finding research is fascinating and rewarding, so I was also excited to find the mortgage deed. 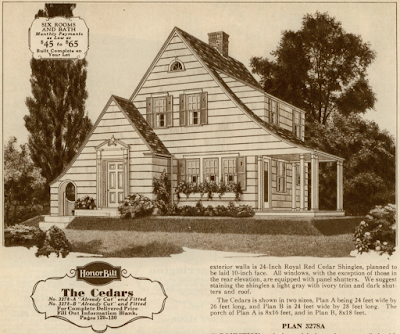 What I love about finding a mortgage deed, is being able to connect names to a house. And then, to be able to connect a history, and a family, to a house. So, I'm going to talk about the family of Ben Multack, who, along with his wife, ordered the kit for this Cedars from Sears, in 1930. But, first, a bit more about the design of a Sears Cedars.

There's a good bit of change to the arrangement of the rooms, on both floors, between the two models. 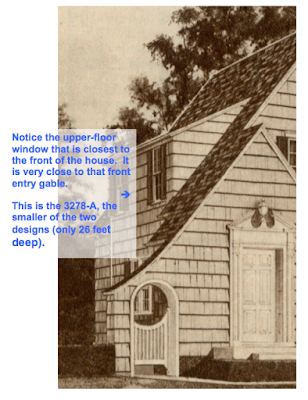 The footprint for this Cedars on Evans Avenue, is not available on the Department of Revenue tax website, for some reason, but, from looking at the window placement of the original part of the house's second-floor, left side of the house, I see that there is one upper-floor window left visible (the other would be further back, and now part of the addition to the left side of the house), and it is pretty far back into the depth of the house. That would mean that this is the larger of the two floor plans, because that window on the 28-feet deep floor plan (3278-B), is further back. On the smaller floor plan, that upper-left window that is closest to the front of the house, goes to a bedroom. On the larger floor plan (our house), it goes to the landing of the stairway. 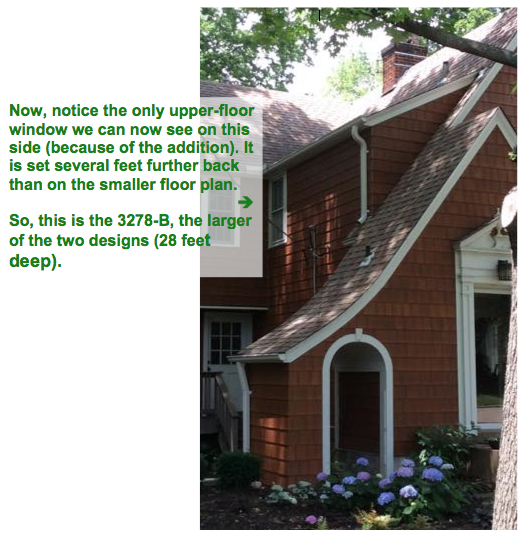 
Our 625 Evans Avenue Cedars, was the subject of an article in Old House Journal, in the May/June 2003 issue.  You can read (some of?) the article in the online version of the magazine, HERE (written by James C. Massey and Shirley Maxwell, photos by Anne Matheis; with the note, "special thanks to Rosemary Thornton"). There are several images included with the article, and it's not entirely clear whether or not all of them are from this home, but here is one of the Cedars living room: 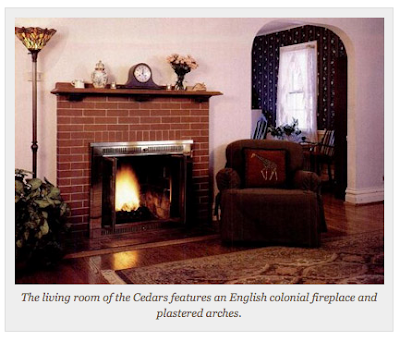 The article shows an image of door handles of the Sears La Tosca style, so I assume that these were from the house itself.  This is a Sears-only design (I believe).  I blogged about a Sears Lewiston model in Webster Groves, Missouri, that also showed the La Tosca hardware, pointed out to me by highly-experienced Ohio Sears-homes researcher, Cindy Catanzaro.

Two Other Sears Cedars From Our National Database of Sears Homes


In Springfield, Ohio, Cindy Catanzaro located a 1931 Cedars, through mortgage records. She sent a letter to the homeowner, who replied, and graciously invited Cindy to see the blueprints that had been handed down from owner to owner. That's a real treat, and it's rare to find blueprints!

Benjamin Multack was about 4 years old when he and a sister and brother came to America with their 26-year-old mother, Lina (Lena). They left Russia in 1908, to come join their father, Samuel Multack, who had left a year or two earlier, and had settled in the city of St. Louis, Missouri.

As a Jewish family, the Multacks were no doubt anxious to escape the anti-Jewish pogroms of that time in Russia, which had begun in the 19th century in the Russian Empire, but, by 1903-06, had worsened to the point where the attacks and murders of Jews were so unspeakable, that The New York Times is quoted as writing that the censor would not allow the kind of description that would be needed to relate the slaughter of children and adults taking place in Russia at that time.
Once safe in America, Samuel continued his trade as a tailor.  By 1910, he was proprietor of his own shop, and the family had grown by one, so siblings Ben, Rosa, Simon, and Hyman, were living with Lina and Samuel on Laclede Avenue, in the city of St. Louis (their 1910 address is now the site of St. Louis University's Chaifetz Arena). The family continued to grow, adding two more children by 1920.


By 1924, Ben had met and married a Missouri girl, Pearl Glenn, of the small, working class suburb of Wellston (that has now seen better days). They were married on November 24, 1924 (two days before the birth of my own 90 year old mother, who would be brought home to grow up in a Sears house, herself!)


Ben and some of his siblings grew the family tailoring business into a thriving dry cleaning business, and, in 1930, he and Pearl ordered the Sears Cedars, to be built at 625 Evans Avenue, in Kirkwood, Missouri, a desirable suburb in St. Louis County, which was founded in 1853. It still retains many of its historic homes and business buildings, and has many fine homes from the 1920s and 30s.

The 1940 census shows that Ben and Pearl had two little girls, as well as a live-in servant named Sophia Hogenmiller, a Missouri woman who had come to live with them by 1935, all living together in the Sears Cedars on Evans Avenue.


The Multacks must have been a well-known family in the Kirkwood-Webster Groves area, with their many businesses, and a building named after them.  Pearl "Peggy" and Ben enjoyed just over 50 years together in their Sears Cedars.  Both passed away in the early 1980s. 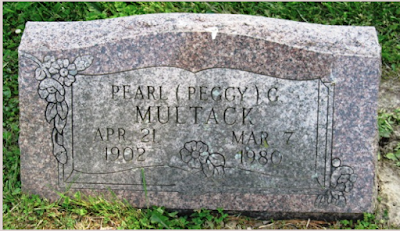 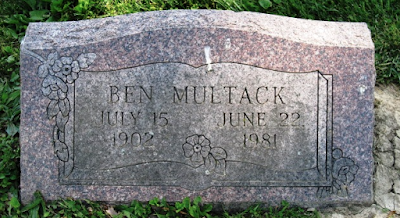