Isn't this a cool bungalow? This is a kit house from the Aladdin Homes company, out of Bay City, Michigan. Aladdin began selling pre-cut house kits in 1906, two years before Sears began selling non-pre-cut kits, and ten years before Sears began offering their kits pre-cut. Aladdin was a huge name in the kit house industry, selling all over the United States, as well as Canada.

This model I'm highlighting today, is called The Franklin. We haven't found too many of these, possibly because this general style is rather common, and houses like this tend to have porches closed in, and little features like the upper front windows, changed, so we may be zooming right by these houses.

This Franklin is most likely the one that was purchased, in 1919, by Gustav Barfuss, Jr., and his wife, Ida. Gustav and Ida were both born in the German-speaking area of Switzerland, and the 1920 census tells us that they came to the United States in 1885 (he) and 1895 (she). Gustav would have been seven years old when he came to the U.S. with his parents, Elizabeth and Gustav Barfuss, Sr. The 1920 U.S. Census tells us that both families lived on Bound Brook Road, and a 1926 newspaper article mentions land owned by Barfuss, Jr. on this road, near Fairfield Avenue, which is about a block from this house. I can't imagine that there is another Aladdin Franklin in Middlesex, on Bound Brook Road, so I'm pretty sure that this house was the one bought by G. Barfuss.

Here is the 1926 newspaper mention of the lands of Barfuss and Osterman, which appears to be right about where this house sits:


I found this Aladdin Franklin totally by chance. I was looking on Bound Brook Road for the Aladdin Winthrop that H. G. Osterman had bought. Osterman ran a nursery on Bound Brook Road in Middlesex. The address that I found for that nursery, is now built over with a newer building, but, when I opened Google maps, I randomly picked a spot to plop down on, to begin looking for Osterman's Winthrop. The spot that I selected, completely by chance, was right in front of the Aladdin Franklin! I didn't even realize that there was a purchase order on our list for a Franklin in Middlesex/Dunellen, until tonight, as I started putting together this blog post, and I didn't realize that Osterman was the neighbor of Barfuss, until I started looking through census records. I love when things fall together like this.

The house that I was looking for, was this model, seen here in the 1919 Aladdin catalog: 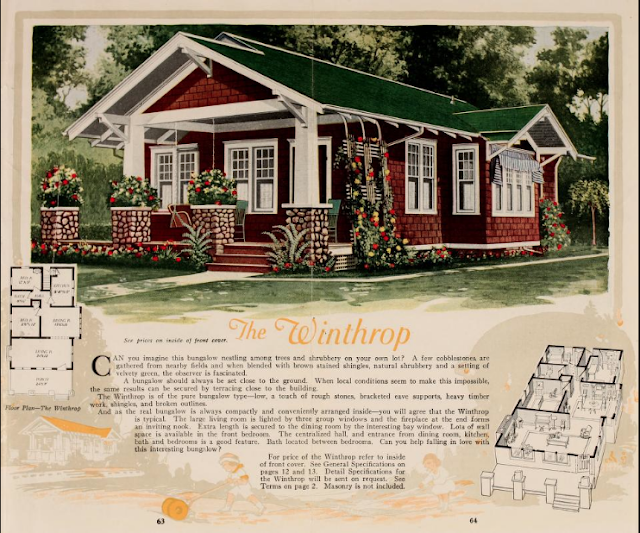 Isn't that a great model, too!? I love the Winthrop! I found one in Bristol, Connecticut, that was part of the Bristol Brass Company purchase of homes (you can read about that one, here). But, I thought that we had missed out on Osterman's Winthrop, because I assumed that it was on Bound Brook Rd, along with his nursery. However... remember the newspaper mention of land that Osterman and Barfuss granted to the state, on Fairfield Avenue, off of Bound Brook Road? Well.... look what I just found at 225 Fairfield Avenue:
I think, once again, that the coincidences are all too great, for these two houses not to be the Barfuss Franklin, and the Osterman Winthrop. Osterman may not have lived in this house... he may have built it for an employee, or for a family member.

Getting back to the Barfuss Franklin, let's take a last look at the house, from the front and side: 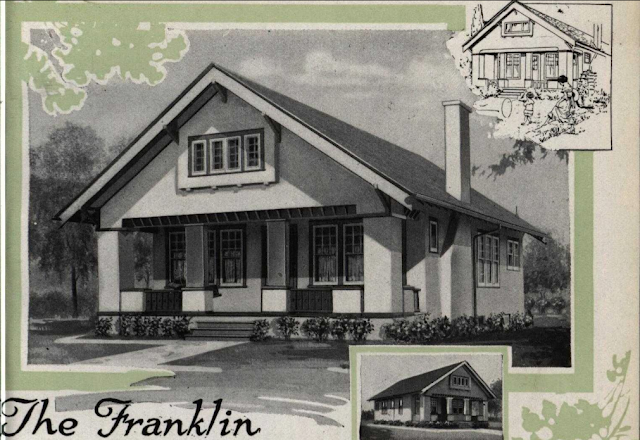 The Franklin has a nice bank of three windows, on the right hand side, for the dining room, with a pair of small windows behind that, for the kitchen. We can see that on this 1919 catalog image, and on the house itself, in the photo below that:


Two Other Franklins
We have just a few other Aladdin Franklins on our list, and two of those are very nice, so I've got a few photos to share, of those. One was found by me, and the other was found by Andrew Mutch, researcher extraordinaire.

Let's start with Andrew's find, which is in St. Clair, Michigan: 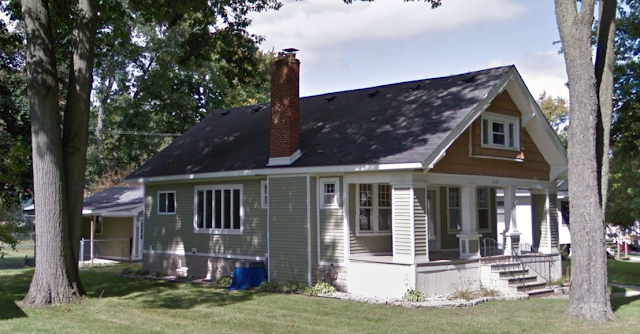 This Franklin in St. Clair, Michigan, was originally part of a purchase of several houses, by the Diamond Crystal Salt Company, in 1919. We haven't found the other houses from that purchase order. It was pretty common for large factory companies to buy set up areas of housing for employees, and they often turned to our kit companies, for those houses. Aladdin offered at least a 10% discount, for a large order of several houses. Sometimes the companies then rented out to their employees, or sometimes the home was part of the wage of the employee. Occasionally, too, the companies sold the houses to their workers.

Our last Franklin to show, also has some good interior shots, so I saved it for last. This one isn't authenticated, but it matches up well. It's in Franklin, Nebraska. 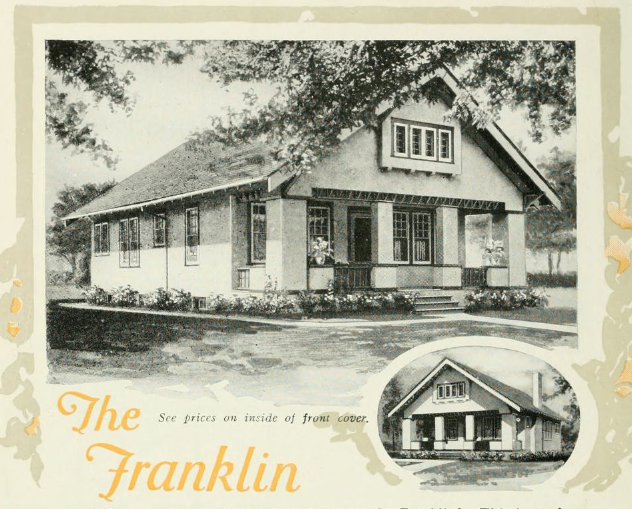 Let's take another look at the floor plan, and then see how some of the rooms follow that. 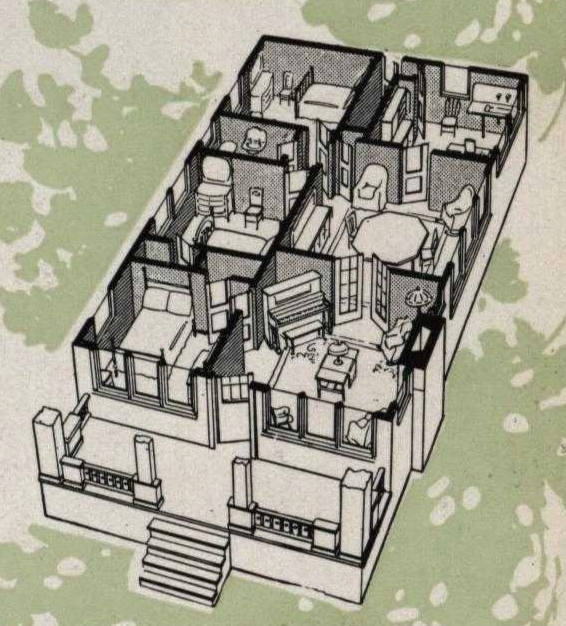 This home was for sale in the recent past, and you can see the listing that these photos came from, here. 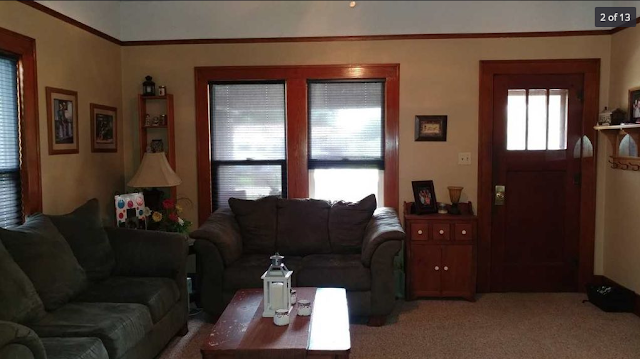 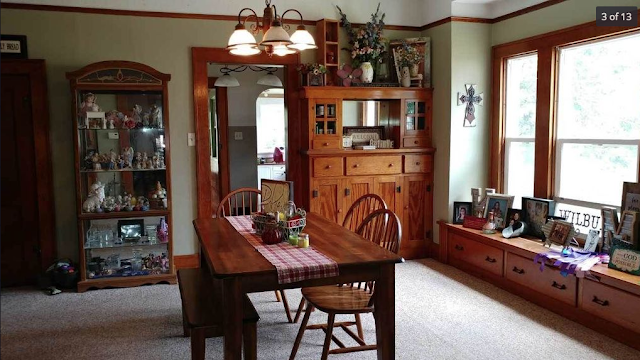 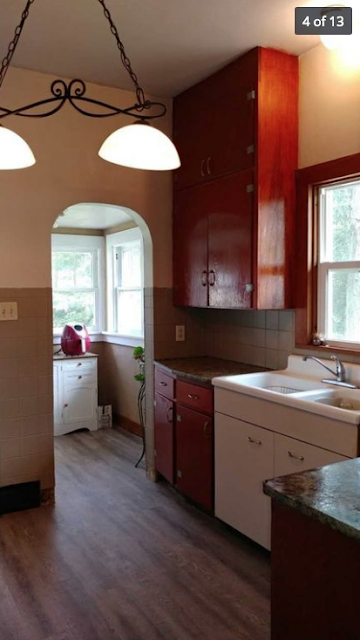 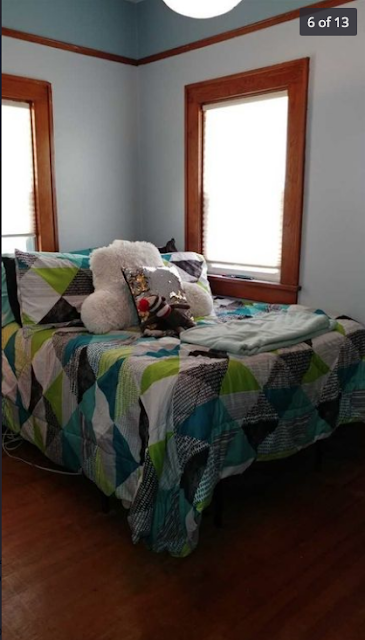 I have a few other newly-found kit houses from Sears, Wardway, and Gordon-Van Tine to show you in the coming weeks, so check back! If you know of any kit houses, please leave me a message (and include your contact info).
Posted by SearsHouseSeeker at Friday, March 20, 2020