A reader of our Sears Modern Homes Facebook page, recently contacted us to ask what model Sears home this might be, as they had been told, when purchasing it, that it was a Sears kit house. But, instead of it being a kit house sold by Sears, we let her know that this house was actually a model sold by Montgomery Ward, through their Wardway Homes catalogs, as the Florence model.

This sweet little house has been beautifully restored, with lovely old hardwood floors, fresh paint, and a refreshed look to the kitchen. It's a simple floor plan, with two bedrooms, and, as is typical of our 1920s kit houses, it has wonderful wide Craftsman-style moulding around the doors and windows and at the base of the floors... and even around the wide openings between rooms. That is what really "makes" these houses... it's what is missing from the modern-era subdivision houses.

Montgomery Ward was a big, national-brand department store chain, with a popular mail-order catalog,  just like Sears. Throughout the mid-19-teens, 1920s, and up until 1932, they offered pre-cut house kits for sale, just like Sears, through their off-shoot, Wardway Homes catalogs. They also offered building supplies via catalog, just like Sears, and we can see from those catalogs, the kind of doors and kitchens and bathrooms and staircases and door-handle hardware and fireplace mantels,  and lighting fixtures (etc.!) that would have been included in Wardway homes.

Both Wardway and Sears offered those iconic wooden batten-style, English-cottage-style,  doors, often rounded at the top, offered with big iron hinges ... well, they weren't really hinges (like on authentic doors from the 1600s, for example), but were referred to as "decorative iron strapping".

In fact, we researchers can sometimes pinpoint whether a house of a lookalike style is a Sears or a Wardway house, by looking at the decorative iron strapping. Sears batten doors used an iron strapping with a very distinctive curlycue at the hinge edge. No other company offered the exact look that Sears did. Here's a comparison:


But, I digress. Our Wardway Florence was built in 1925, according to St. Louis City records, and this batten-style, cottage-style door with iron strapping, was found more often on the 1930-era homes with that English cottage look.

The 1920s homes often offered a simple, solid, Craftsman style door, with or without some kind of window openings at the top. And, that's the case for what would have been supplied with the Florence model. 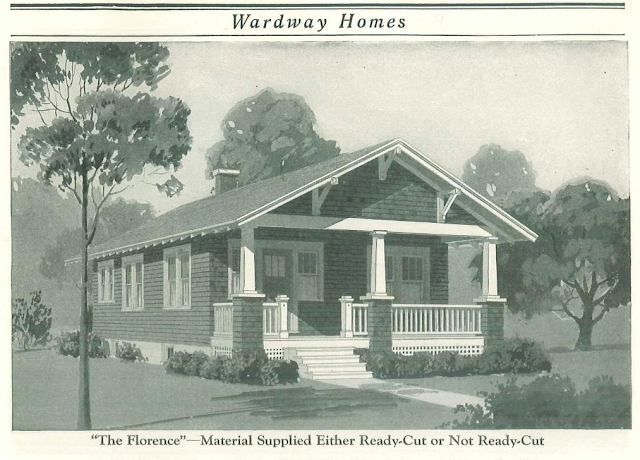 It looks like the catalog showed the Wardway Sacramento style Craftsman-style door. Our St. Louis Florence, however, looks to have that same style, but with another solid panel at the top.

Here's the door on the Florence. Those two windows on either side of the entry door make a really nice look, I think. It sets the Florence apart from the many other straight-shot models offered by every company.
The Wardway Florence in St. Louis is full of beautiful Craftsman-style door and window trim:
With solid-wood, two-panel Craftsman-style interior doors:


What Is A Pre-Cut Mail-Order House?
If you're new to this concept, as our new buyer may well be, here's the concept: companies that sold house kits via mail-order catalog, like Sears and Montgomery Ward (there were other companies, too), shipped just about every bit of the house to you, via train, in several box-car loads. It was up to the new homeowner (or their hired construction crew, if they weren't building themselves) to go to the train depot and unload everything from the box car... then load into their own vehicle... and haul everything back to the work site, for construction. Sears instructed its buyers to be SURE to FIRST organize all of the pieces of building lumber, etc., before even THINKING of beginning construction.

Beginning in the mid 19-teens, most all of the house kits purchased, were pre-cut. That meant that the framing lumber would have all been stamped on the ends, and on the face, of each piece, with a letter-and-number code to help sort, and then put together, the lumber pieces. The pieces were pre-cut to the size needed for their purpose, and so it was absolutely essential that everything be put together in an organized way. Sears and Wardway explained that this pre-cut system was part of what saved you money -- you didn't have to waste time measuring and hand-sawing (or hauling wood to a lumber yard's sawmill), and you also, therefore, didn't have waste, because you weren't paying for the parts of the lumber that you weren't using (well... in theory). The Florence, however, was available as either a Ready-Cut kit, or Not-Ready-Cut. If the original buyers chose Not-Ready-Cut, then they would have saved a little money on the cost of the kit, but would have added the cost, in time and money, of having to deal with standard-length pieces that needed to be measured and cut on site.  The first image, below, is from a Sears catalog, and shows where the stamps on the edges of lumber would have been: 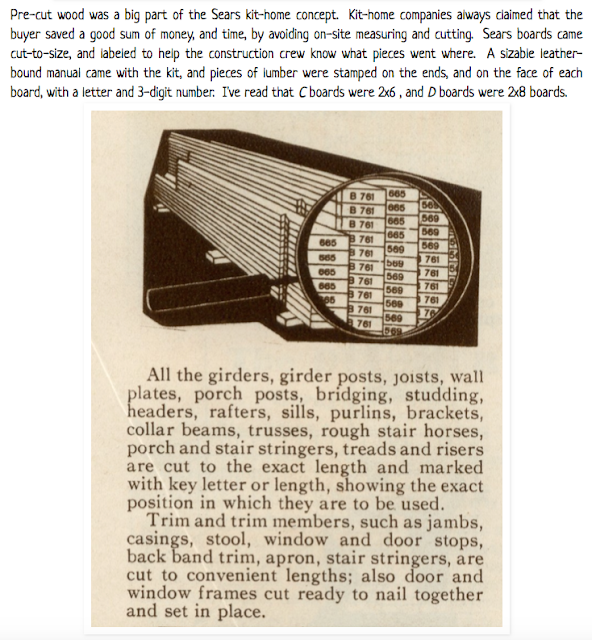 This image is one I took, myself, of stamps on the face of lumber, found in the basement of a Sears house in Affton, Missouri. That blog post of mine, is a good source of information about the whole concept of pre-cut, mail-order homes. 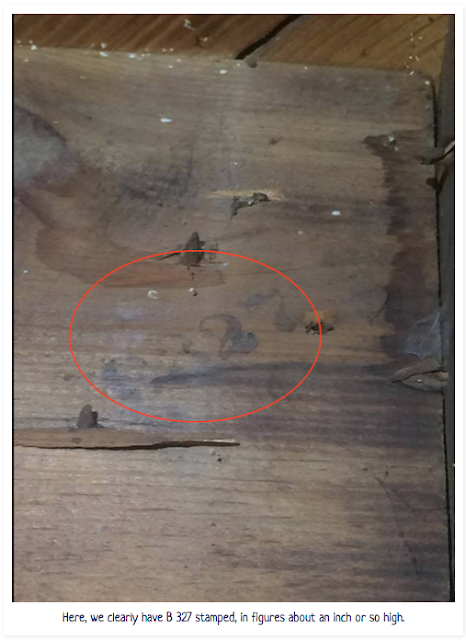 The following images are all from a Sears instruction book, but I'm sure that Wardway must have sent the same kind of thing: 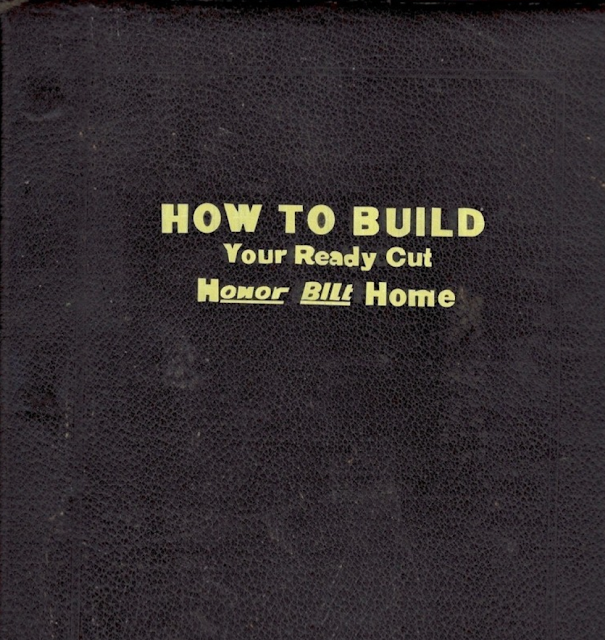 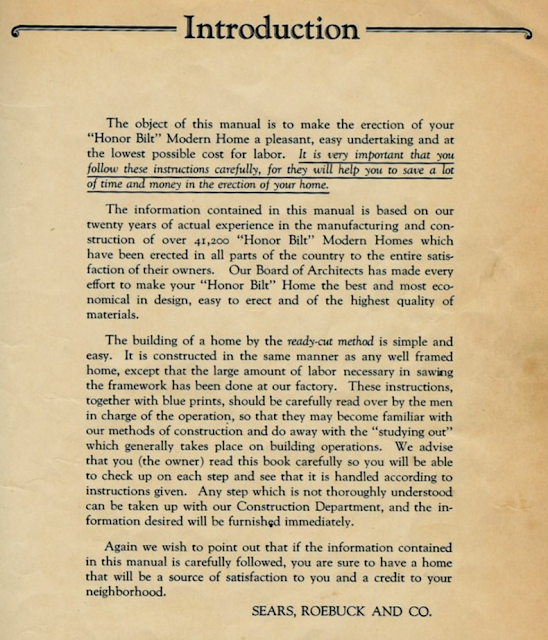 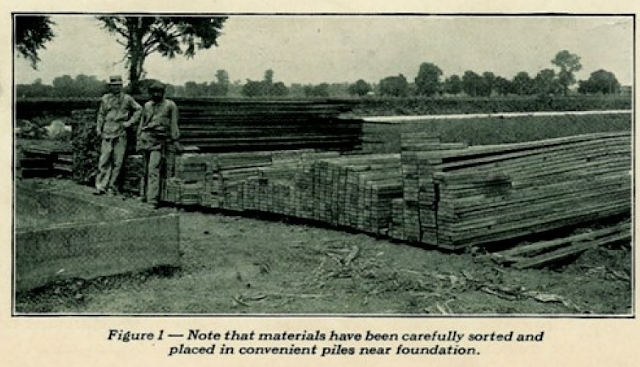 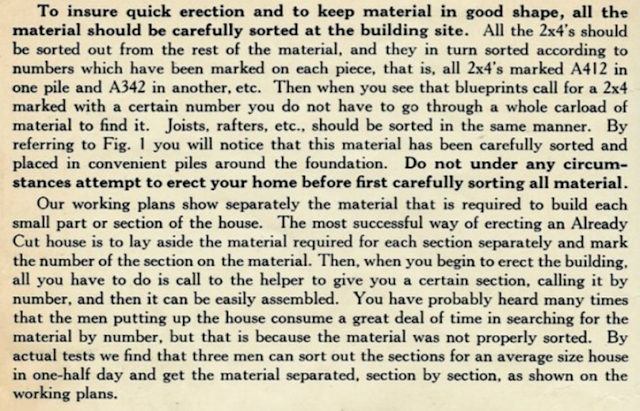 And, Wardway offered pages in their catalogs (like these from the 1924 Wardway Homes catalog), explaining the Ready-Cut system, and how it saved money:
They also offered pages outlining the quality offered in their kit homes: 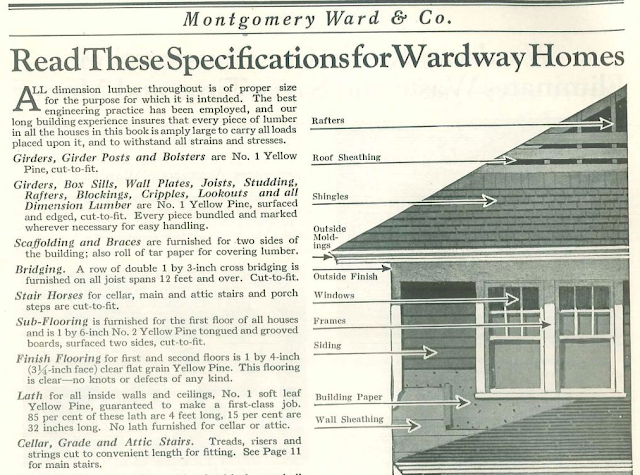 Wardway also explained where their lumber mills were... but... they weren't actually Montgomery-Ward-owned mills. Montgomery Ward actually contracted with the Davenport, Iowa-based Gordon-Van Tine kit-house company, to cut and ship their Wardway Homes (which we know, thanks to research done by Dale Wolicki). Gordon-Van Tine was an off-shoot of the U. N. Roberts Lumber Company of Davenport, Iowa. In 1915, U. N. Roberts re-tooled one of their lumber companies -- the Funck Lumber Company, in St. Louis, Missouri-- to add on a section to prepare pre-cut lumber for their Gordon-Van mail-order kit homes, as I explain in a previous blog post:
Then, Gordon-Van Tine also contracted with Montgomery Ward to cut and ship the wood for the Wardway Homes. So, it is likely that this house, though bought through Wardway, was manufactured right here in St. Louis, at the Funck Lumber Company (by the 1920s, though, the lumber yard had been re-named as the Goodfellow Lumber Company, after Mr. Funck retired).
Back To Our St. Louis Florence
Because Wardway and Gordon-Van Tine worked closely together, they had some kind of agreement to both offer the same house models (most of the models were in both company's catalogs, but not all), but they offered them with different model names. Interestingly, the Florence, as offered up until 1924 or 1925, does not have a GVT equivalent. However, beginning in 1926, Wardway made a few slight changes to the Florence, and began marketing this floor plan as the Avondale... with Gordon-Van Tine offering the exact equivalent, as their GVT No. 618. Take a look at the floor plans of these three models... they are (almost) exactly alike:
However, if we take a closer look inside, we see that it would be erroneous to call the Avondale and No. 618 identical to the Wardway Florence.... because the Avondale and No. 618 have had the slightest little changes made... they've had a linen closet added, and a bedroom closet added:
From the exterior, we can see the changes that were made to the number and placement of windows -- again, making the Avondale / No. 618 not an exact twin to the Florence. The distinctive windows flanking the front door, were changed -- which really takes away the one nice bit of personality that the Florence had going for it. Other spots where there were doubles, windows were changed to singles, or to separated singles, and two additional back windows were added (one in the kitchen, and one in the back bedroom). A side window was added to the front bedroom, as well.

But, though I don't see the Florence in the 1926 catalog, it was apparently brought back (or never left... maybe my 1926 source missed a page?), because the Florence is a highlighted house in the 1929 and 1930 and 1931 catalogs. Here it is in the 1930 catalog (thanks to Andrew Mutch for scanning his catalog for us):

The Interior Of The St. Louis Wardway Florence
The interior views show that the St. Louis house remains faithful to the floor plan, with the front door opening into the living room, the dining room following behind that, and the kitchen behind that. Even the size of the openings between the rooms, remains correct for the original house. The entry into the short hallway, from the dining room, is visible, and you can then see that the bathroom is in the correct spot. The bedrooms look correct, as well. Everything has a nice fresh coat of a pretty, soft grey paint, with bright white woodwork. Let's take a look:

Thanks to Bing maps (because Google street view here is too grainy), we have a (somewhat dark) photo of the side of the house, showing all of those double windows on the left side:

Our National Database of Gordon-Van Tine and Wardway homes, has only two other Wardway Florence models on it --neither in St. Louis. That doesn't mean that there aren't any others in the St. Louis area, but, actually, this is the first Wardway home we have found in the St. Louis City and St. Louis County area. Of any model. This makes me think that I should be looking for them -- I didn't find any Wardway mortgages (at least not with the known Wardway trustee name that we have) in my St. Louis area mortgage searches, and, frankly, I simply don't have Wardway models in my head. This is the first time that I have really analyzed one of the Wardway models... I won't forget it, now!

If you're interested in learning more about Wardway homes, the best book out there (the only book, actually), is this very good field guide by Wolicki & Thornton, which looks to contain all of the Wardway homes, thoughout the years. It is a good resource (though, for some maddening reason, they did not include an index):
Actual original Wardway Homes catalogs pop up occasionally on eBay. Because most of them are available to look at, online, you shouldn't overpay for them. They are often labeled, "Rare!", but, honestly, they're not that rare. Especially the ones from the 1920s. Don't pay the $90 that they sometimes ask for them. There is a re-print out there, of the 1925 catalog, and it starts at something shy of $150, on Amazon... that's nuts, too.  If you want to see the available-to-see-online years, I have the links to them organized nicely, by year, on this blog post of mine... jus scroll down to the section on Wardway:

I was very happy to find out about this cute little Wardway Florence in my own home town! Thanks for asking for our help identifying your house, new owner -- and for giving me permission to blog about your home.
Posted by SearsHouseSeeker at Friday, August 03, 2018