Take a deep breath: The Sears No. 118 in Mexico, Missouri, is up for sale!

Researcher (and Sears-house-owner) Andrew Mutch noticed this in the real estate listings today, and shared it with our research group. Of course, since I'm the Missouri resident, I thought I'd put together a little post about it. Thanks, Andrew!

In case you didn't know, the big, gracious, stately, No. 118 model by Sears was very popular. Quite a few have been found, despite it being such a large house. It was available from very early on in the catalogs,  re-named The Clyde in 1918, and then, finally, discontinued. It was never offered as a pre-cut house, so that means that all of the lumber would have had to have been cut at the job site-- what shipped, would have been standard-length boards. This is the way all of the Sears kits were sold before 1916 (including my own family's 1911 No. 110/Silverdale). After 1916, most of the kits (but not all), were sold with all of the lumber (except trim) cut to the correct length, and labeled with a letter-number code, to help the homeowner/builder piece together the house. That saved enormously on time and waste, because no time had to be spent on measuring and hand sawing. The pre-cut issue was the big selling point of Sears (and other) kit homes. But, the No. 118 was never sold as a pre-cut house. Still, it was pretty handy to have every single bit of everything that would be needed, shipped to the homeowner (via train car loads). Sears shipped the supplies in stages, allowing the homeowner to have the framed-in and roofed house put together first, so that they could store the rest of the building supplies inside the house.

The Mexico, Missouri No. 118 is the reverse floor plan to what is shown in the catalog image. Sears was happy to do that, and people usually chose that option if they preferred the windows, or the porches, or the access to the house, to be oriented in a certain direction, maybe to take advantage of some aspect of their small lot, or, in the case of this house, because of how the house would sit on their large stretch of farm land.

Here is the image of the No. 118 in the 1912 catalog. Notice the much lower price. Besides the six years that had passed between 1912 and 1918, lumber prices soared right around, and right after, WWI.
Sears usually suggested that the whole house could be built at a cost that was about double the price of the kit... so, adding in for labor, and the supplies that Sears didn't sell (plaster and any other masonry items, as well as the extras for the choice of upgrades to interior wood or trim pieces, and for the plumbing, heating,  and electrical systems chosen). In 1912, Sears suggested that the No. 118 could be built for about $3,060, and, since this house in Mexico, Missouri, is thought to have been built in 1910, that's about what it would have cost. The homeowner would have had to already own the land/lot the house would be built on.
Here are the heating and plumbing options offered for the No. 118,  in 1912:
Elements From The Catalog
Since we have the luxury of interior views, thanks to the real estate listing, let's take a look at some of the elements, and how they were shown in the  circa-1910 Sears Mantels & Consoles catalog, and the 1912 Sears Building Materials catalog.


And, the gorgeous interior colonnades: 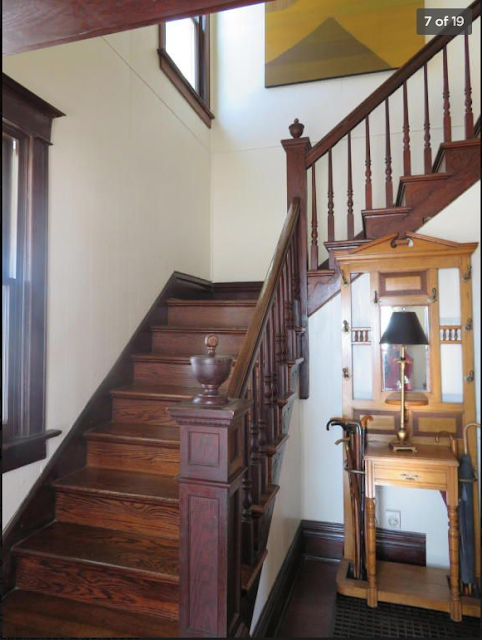 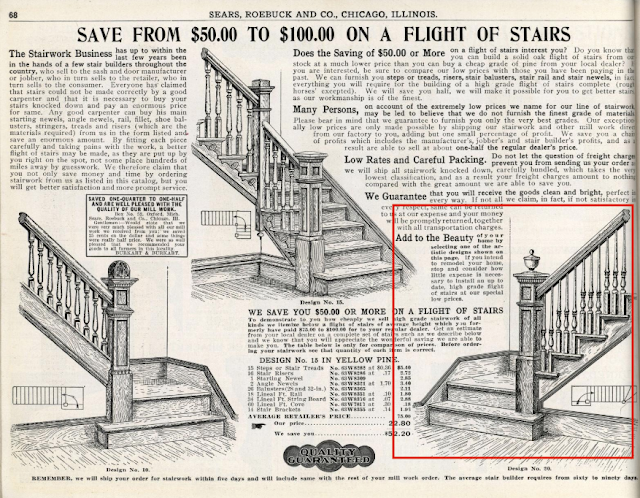 Floor Plan and Interior Views
I won't show you every room, but here are a few great shots from the listing. But, let's start first with the floor plan from the 1912 and 1918 catalogs... it didn't change, but some of the names of the rooms did. For instance, the bedrooms were often labeled as chamber in the oldest catalogs (old Gordon-Van Tine catalogs used this term, too). That is no doubt an offshoot of the French term, chambre, which means bedroom (or hotel room, if you say, chambre d'hôtel !). You'll also see that the bathroom is simply called, toilet room, in 1912. Ha!

Here's another view of the side sitting room, with its bay-style wall of windows: 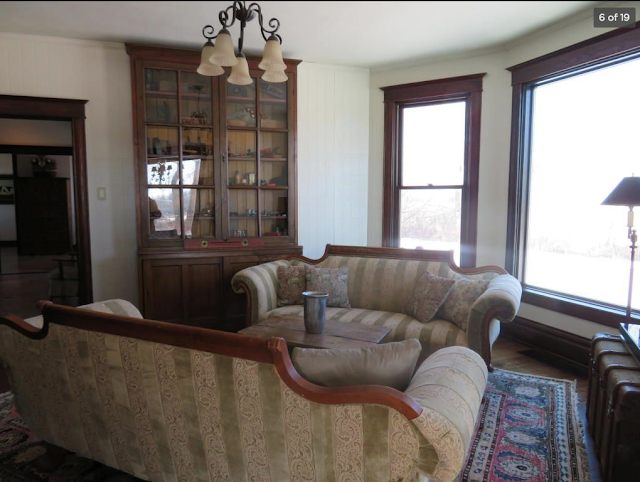 And one of the first-floor rooms, showing off its HUGE windows: 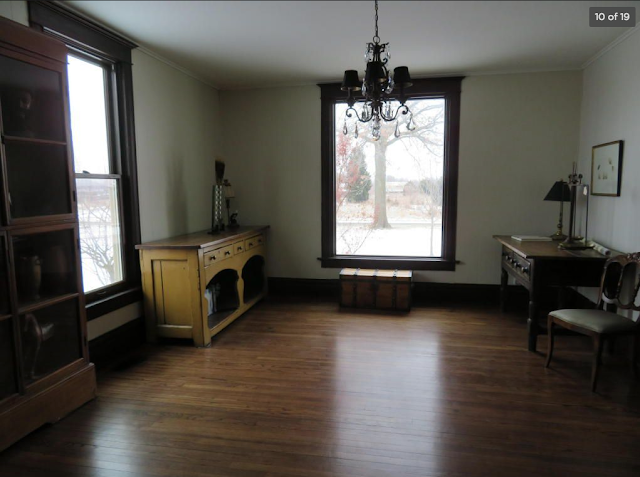 One of the lovely bedrooms: 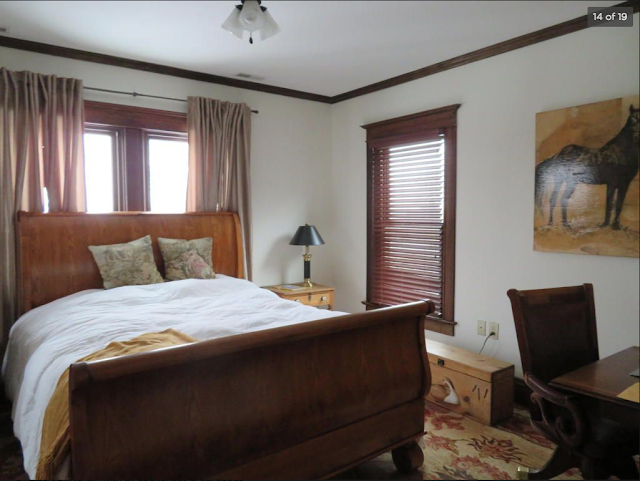 And, the tastefully remodeled kitchen. Remember, most kitchens in the early 1900s, didn't come with attached cabinets on the walls, and long expanses of counter space. The most common cabinet/workspace option was the "Hoosier" style cabinet (that's a brand name, actually, though its used commonly to refer to these kitchen cabinet/storage furniture pieces). The No. 118 in Mexico, MO, has one of these cabinets... no telling if it's original, but it doesn't look exactly like the only one I ran across in a Sears catalog (a 1914 general merchandise catalog). Much of the prep work in the kitchen would have been done on the kitchen table, or on the little teensy weensy enameled workspace on the Hoosier-style cabinet. Those cabinets had interior storage bins for flour and sugar, as well as storage space. We had a Sears cabinet like this in our 1907 brick home in St. Louis, that my husband's mom grew up in (not a Sears house, though... but, it also had a Sears chandelier from the 1930s!). 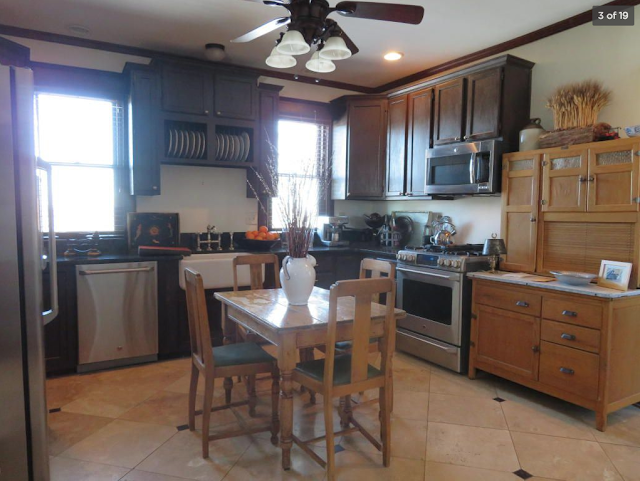 The "other" Sears Clyde

It's important to note that Sears gave the name Clyde to another model, offered throughout the 1920s. The "little Clyde", as we sometimes call it, is a nice little shot-gun style bungalow 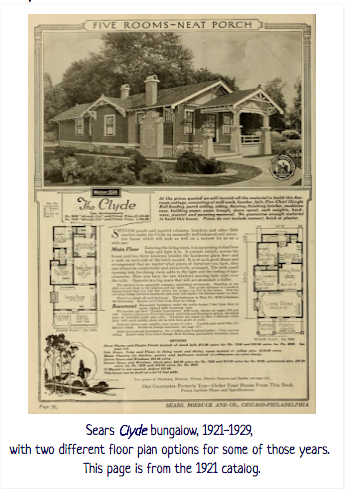 Other Examples of the No. 118
I've blogged before about the "big Clyde", having run across a real estate listing for a nice No. 118/Clyde in Almond, New York. Here's that one:
The house currently has a pending offer, and here is the most recent listing. Check out my blog post for more photos.

Other Possible Sears Houses In Mexico, MO
We also have this house on our national database of Sears homes, as a possible Sears Lewiston. This one could use a little love, but it's for sale, too:

And, sitting at 1603 S. Clark Street, in Mexico, Missouri, is what looks like a little Sears Wellington: 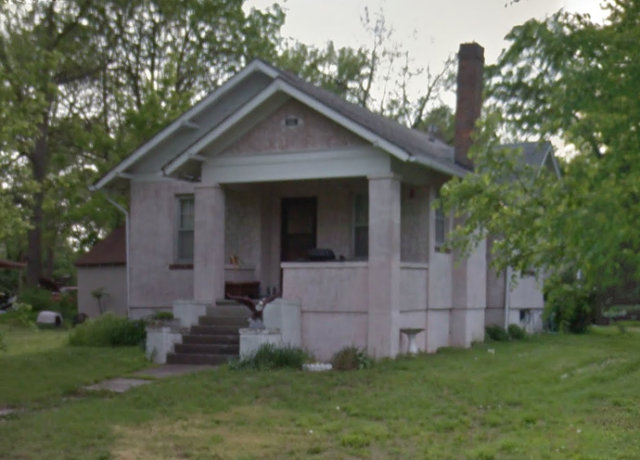 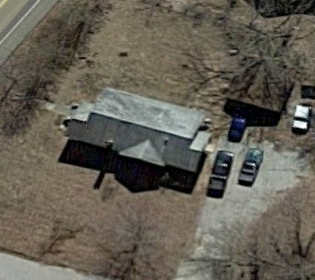 Posted by SearsHouseSeeker at Sunday, May 13, 2018