Sometimes, we researchers, and other kit-home enthusiasts, end up looking around in the same town, on the same streets, and end up coming across the same houses. That happened today, with this house. Here it is, a big, beautiful Sears Saratoga model, sitting there waiting to be discovered, and two of us came across it. Well... it was just waiting for someone to find it and document it, and that's what we are all about, so let me tell you about this house.

The Saratoga began its run in the Sears Modern Homes catalogs as the No. 146, but later had a few small changes made to it, and it was then marketed as the (new) No. 108 (a different house model was shown as the No. 108 in the earliest catalogs). The most obvious change to the house itself, was the porch: the original model, the No. 146, had a big wraparound porch, like the one you see here on Silver Street in Bennington, Vermont. The porch on the later No. 108, and the Saratoga, spans only the front of the house. There is also a side entry door on the later versions, that is absent on the No. 146. Inside, there was a difference in the entry area, as the No. 146 had a defined entry hall, whereas the No. 108/Saratoga floor plan shows the entry area simply combined as part of the living room. I outlined these differences in a blog post earlier this year, about a Saratoga in Fairmont, West Virginia.

The exciting thing about this Bennington house, is that we can label it as "authenticated", because it was what we refer to sometimes as an "advertised house". What that means, is that the catalog mentioned that one of these homes was built in this city. We don't have a testimonial letter from the owner, so we can't pin down the address, but, in all likelihood, this particular house is most surely the house that the catalog mention is referring to. Here it is, mentioned in the 1917 catalog: 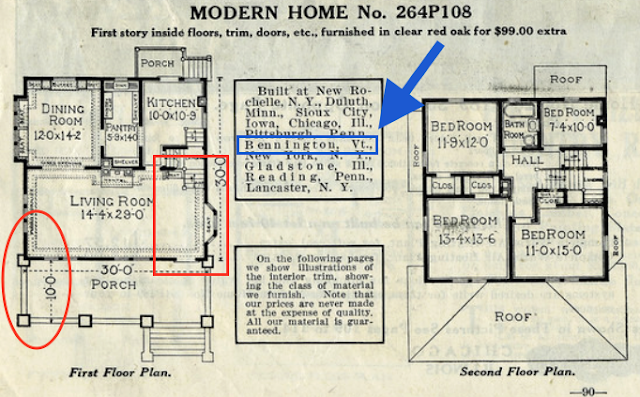 Let's finish off with a few more views of this house, which is located at the corner of Silver Street and Grandview. The house number is probably 219, but Google and Bing maps don't accurately direct us to this house when that address is given. The house to its left is definitely number 217, and the house across the street appears to be number 220, so I think that 219 is the correct address.

Here is that stained-glass dining room window, and built-in sideboard buffet, in the West Virginia house I mentioned earlier: 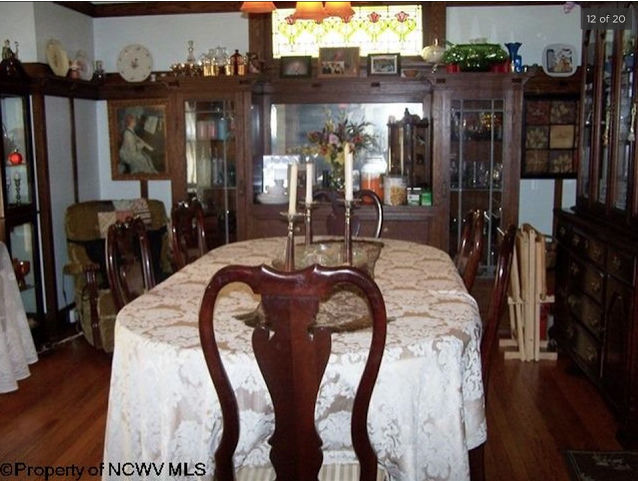 And, here is how the dining room, living room, and entry area were depicted in the 1914 catalog, where you can see that there is a partial wall separating the entry hall and the living room space: 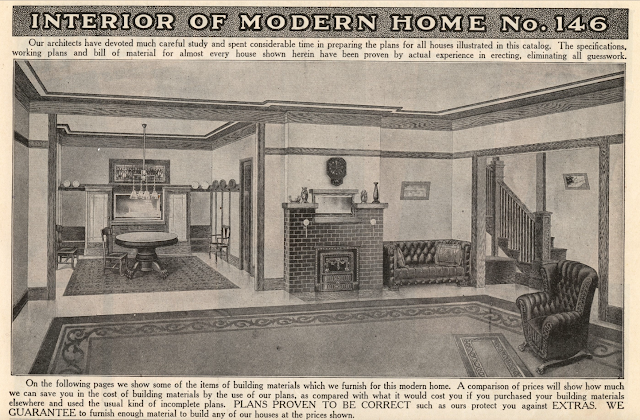 The Sears No. 225
The reason that I was looking around in Bennington today, is because another enthusiast, after reading a blog post of mine about a beautiful Aladdin Shadow Lawn on Weeks Street in Bennington, had decided to look around the town to see what she could find. And, what did she find just two doors away? An incredible bungalow: the Sears No. 225. I will admit that I spent very little time looking around Bennington after finding the Shadow Lawn. I did look around at the nearby houses, and didn't recognize anything. Ha! Big miss there! This beautiful No. 225 was sitting right in front of my nose, and I didn't recognize it. And, the humorous part of it, is that, every time I have seen the No. 225 in the catalog, I have thought to myself, "Hmm, I wonder if anyone has ever even seen one of those." Well, sure enough, they have. That just goes to show you how helpful it is to see the real house, "out in the wild", because catalog images just don't hit your eye the same way. Take a look:


And, here is the house, all in white, sitting nicely at Number 201 Weeks Street, Bennington, Vermont:
This white house matches the windows, the chimney, the front door, the porch columns, the roofline, and the inset dormer of the catalog images of the No. 225.  It's a great find, and a great addition to our National Database of Sears Houses in the U.S.... where, as it turns out, we already had three others. 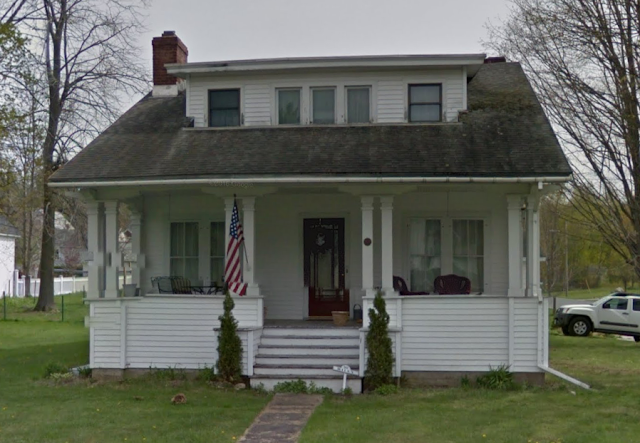 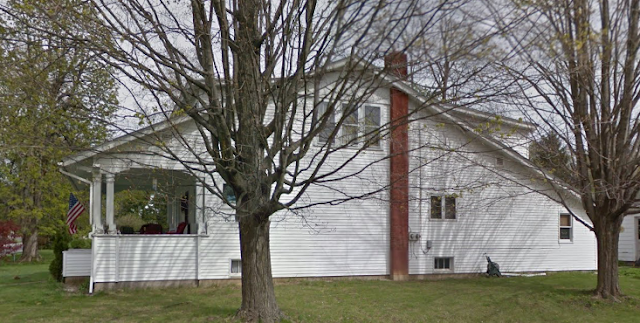 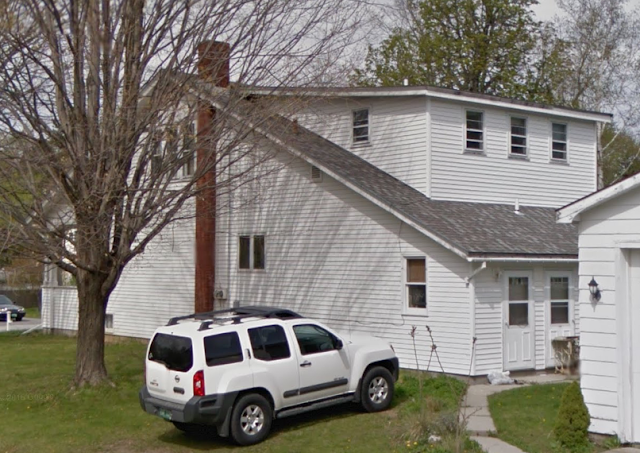 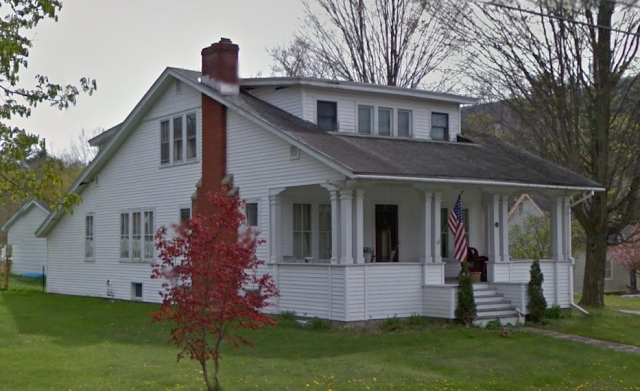 As I mentioned above... I believe that there is another No. 225 just down the street, at the corner of Weeks Street and Washington, at number 231 Washington Avenue.  Let's take a look!

This house is remarkably similar to the lines of the white house at 201 Weeks Street. However... we wonder if maybe  this one was actually made with locally-supplied lumber, using the plans from the Sears No. 225 down the street. Though people sometimes think that, when they find another similar house right nearby a house they suspect to be a Sears house, that it is more evidence of them both being a Sears kit. But, in reality, that makes us more suspicious that at least one of those houses was not a kit. Remember, much of the time, Sears kits were bought by individuals, and often, especially in the early years, they intended to build the house themselves. It's unlikely, then, that the very same model would be bought by a nearby neighbor. But, what is a more likely scenario, is that maybe the plans were shared with that neighbor, or brother, or sister, or son, or friend, and they then bought the supplies locally to build the same house. Because, if this house were a kit, bought at the same time, it would likely have the exact same porch columns, windows, and dormer. But, this house has a few little anomalies:
Other than that, the house is a great match! LOL
No, seriously, that sounds funny, but all of those changes are easily explained away as changes that would probably have been made during a modern renovation of the house. But... without seeing the inside, or earlier photos of this house, we have no way of knowing. What we do know, though, is that this house is remarkably similar to a house only just down the block, and, this being a pretty rare model, it's pretty likely that there is some connection to the white house down the block. Unfortunately, we will probably have to put this on the "possibles" tab of our national database, because there are too many slight differences, but... it was a fun find.

Here are a few comparison photos:

We do know that both houses were probably here in 1925 (though surely built earlier, because the No. 225 was only sold through 1917)... at least, there were houses at these addresses. And, both houses were listed as being of similar value in the 1930 census ($9,500 and $10,000). So, the grey house at 231 Washington Avenue was certainly not a new-build recently, even though it looks fresh and new.

Who Lived Here?
201 Weeks Street
Mr. and Mrs. Irving C. Cobb lived in the white house at 201 Weeks Street. Mr. Cobb was a traveling salesman, and there are numerous mentions in the Bennington Banner, of Mr. Cobb being away in New York  on business, beginning in the 1920 papers. One year, Mrs. Cobb accompanied her husband as he attended a convention in Atlantic City.

In 1919, Mabel gave a presentation entitled, "The Moral Influence Of Lincoln in Literature", as part of the "Fortnightly On Saturday" cultural presentations in Bennington. An article in the March 12, 1919 paper, says that the Committee on Literature had, of late, been focusing their readings on issues related to war, and subject for that Saturday's presentation, was "Our Presidents Distinguished In Letters". 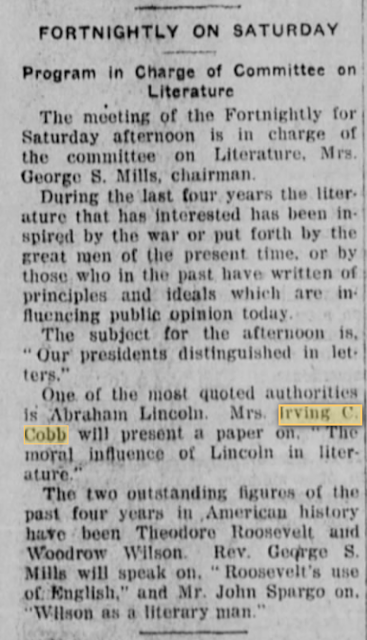 
More Kit Houses In Bennington?
You bet! Now that we realize that we should look around a bit in Bennington, we'll be on the lookout for more kit houses by Sears, Aladdin, and other companies. I've just run across two of the Solace model by Sears, for example... one with clipped gables, and one with peaked gables (which is unusual for the Solace).

An Advertised Sears Concord In Bennington

We also know that the Concord model was built in Bennington. There is a house that almost looks like a Concord, on Grandview Avenue, not far from the No. 146 that I showed at the top of this blog post. Is it "the" Bennington Concord? Well, if it is, it had a major design change to the roof line, either at build, or later in its life. Here it is:

A Zillow ad for this house, gives its build date as 1895. Who knows if that is correct... build dates are so often off. However, I know from my own family's Sears house, built in 1911, that it has had huge changes to its lines over it's 100+ years of existence. Walls were added, rooms were added, porch columns were changed... even the siding was changed from wood plank to cedar shingle. So, who knows! Maybe this is the "advertised" Sears Concord in Bennington.

Thanks go out to our fellow Sears house enthusiast, who faithfully follows my blog and offers up excellent leads to help us add to the National Database of Sears homes!

Posted by SearsHouseSeeker at Tuesday, October 17, 2017