It is not every day that we run across this model, so we're certainly excited when we do. This looks to be an example of the Sears Saratoga, first offered as the No. 108 and No. 146, depending on the year. Some years showed it with a little side entry, as you can see in the 1916 catalog image to the right, as well as on the house in Fairmont. Earliest years show the Saratoga with a wraparound front porch, but later years do not show that. Our house here in Fairmont, West Virginia, does not have a wraparound front porch.  Also, look at the decorative element on the top of the porch columns... perfect match, for either version!

There are two obvious differences between the earliest version of this model (the No. 146), and the later version (the No. 108, or Saratoga): the existence (or not) of a wraparound porch, and also, the existence (or not) of a small entry hall as you enter the front of the house.  The earlier model (No. 146) has a small entry hall leading to the stairs, and the living room is to the left. You go through a big opening to get into the living room.  However, in the later model (No. 108 or Saratoga), you go right in to the living room, and there is no wall on the side, separating the entry area from the rest of the living room. Take a look at these floor plans from 1914 and 1916:


As you can see from this front view, the Fairmont, West Virginia house does not have a wraparound porch.  You can see the matching window arrangement: two pairs of double windows above, and two pairs of double windows below, on the porch, with the entry door to the side, just as shown on the catalog images.  You can also see the dining room bump-out on the left side, which has four windows:

The catalogs devote several pages to views of the interior of a Saratoga, and to millwork, windows, and built-ins that were part of the Saratoga package.  See that wonderful window set up in the front gable? That is shown in the catalog.  Let's take a closer look: 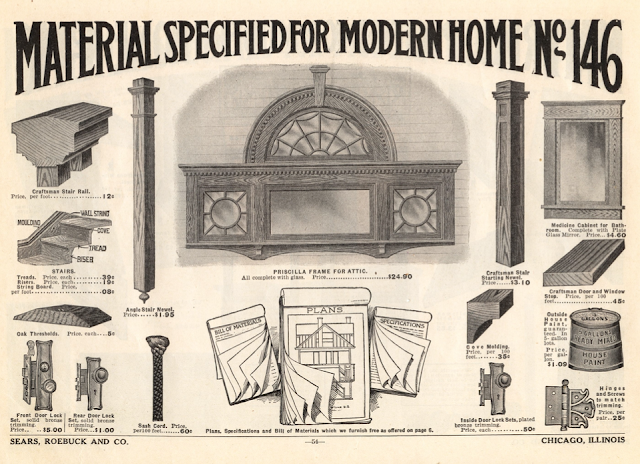 The real estate listing shows a photo of the somewhat crowded living room, but it's enough to show that the Saratoga's built-in buffet is right there: 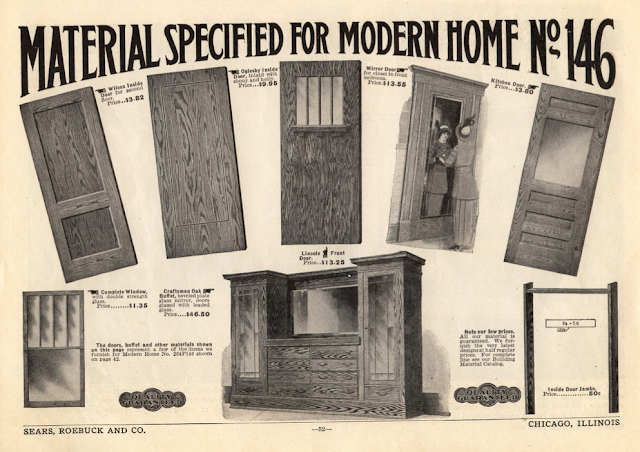 Above the buffet, you can see the art-glass window, just as it is shown in the catalog:

From what you can see of this view of the living room and stairs, it looks like our Fairmont Saratoga matches the catalog's depiction of the interior of a Saratoga. You can see how the millwork and wall moulding matches the dining room walls, and the living room, even the trace design on the ceiling:
You can tell that this is the post-1914 No. 108, and not the No. 146, because there is no wall creating an entry way.  The living room is open right up to the staircase. Also, there is a door to the kitchen, to the right of the fireplace. That, too, is shown on the post-1914 floor plan, but not on the 1914 and earlier floor plans.  So... this house is listed on the county assessor's website with a build year of 1914, but it most likely was built at least a year later. Sometimes build years are really more indicative of when the lot was purchased. 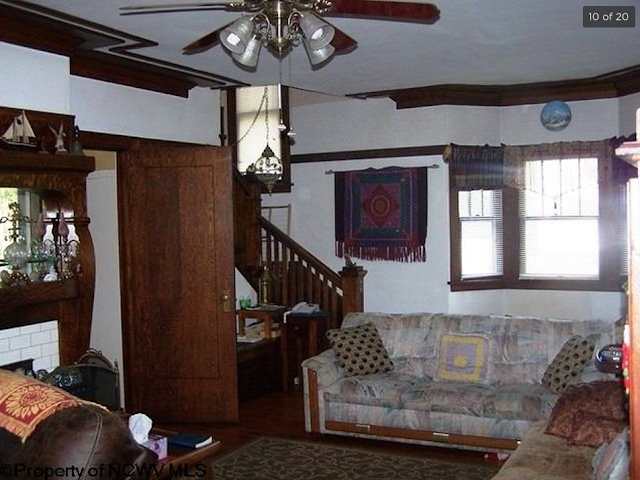 There's even a sort-of-matching garage! 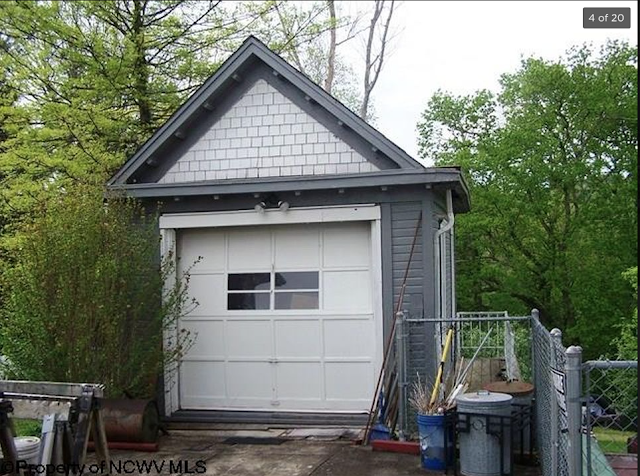 Let's take one last look at the exterior... you can just about make out the left-side bump-out windows for the dining room:
In most instances, we make a point to note that a house that we have just seen in a drive-by or via a real estate listing, is not an authenticated model.  This house in Fairmont, though not authenticated via mortgage records or shipping labels, can be considered authenticated through the presence in the interior of numerous millwork, window,  and decorative pieces exclusive to the Sears catalog, and offered as part of the Saratoga's package. What an exciting find this was for me today!

Posted by SearsHouseSeeker at Monday, May 01, 2017