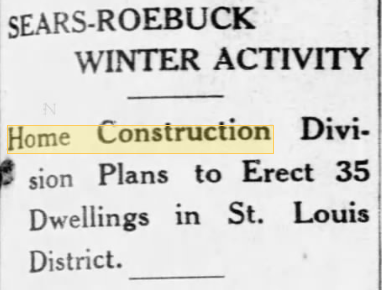 Sears-Roebuck began heavily advertising their home construction division in St. Louis, around 1930, and, in 1931, they named St. Louis architect Lawrence J. Steffens as their division architect.

Though Sears had been offering their pre-cut catalog homes via mail order since the 19-teens (and before that, for non pre-cut), and though , before 1930, there were Sears catalog homes built in the St. Louis area, with mortgages through Sears, the big advertising push really began in earnest in 1930. In fact, I didn't find one single newspaper advertisement for Sears Modern Homes before 1930, in any St. Louis newspapers, but the ads are there regularly in the early 1930s.  And, one of the things that Sears heavily advertised in local St. Louis papers (like the St. Louis Post-Dispatch and the St. Louis Star and Times), was their new (as of 1930) service of helping the homeowner build whatever home they had their heart set on-- not limited to designs offered in the Sears Modern Homes catalog -- and, that included providing the services of a Sears-employed architect to help them put together the design that suited their fancy. In St. Louis, that architect was often L. J. Steffens.

The ad above is the first I have ever seen, touting "solid brick" as an option for a home built by Sears. We researchers have steadfastly insisted on reminding each other, and our readers, that Sears homes are never of solid brick.... but, this changes that statement. Let's amend that to say: Sears stock catalog mail-order homes were never of solid brick (because Sears did not supply or ship brick... even homes of brick veneer had their brick out-sourced from a supplier local to the homeowner's building site), but there are, apparently, solid brick homes that are Sears-(custom) designed, Sears-financed, and Sears-built.  The home pictured below, is one that I featured in a blog post about St. Louis homes that had Sears mortgages, but that did not look like homes from the catalog. Recognize it? It is very similar to the one pictured in the ad, above.  It's probable that it was designed by a Sears-employed architect, and it was definitely built and financed through Sears.
Another ad, in the "BUILDERS" section of the St. Louis Star and Times, March 27, 1931, advertised these services in the classified section of the paper:

The May 17, 1931 ad in the St. Louis Post-Dispatch continued, in its bottom half, to emphasize that Sears would plan, finance, build, and guarantee any home -- "regardless of size or cost", and that "one single order ... brings you the services of experienced architects...." The architect that I saw, time and again, linked to Sears-built, and sometimes Sears-financed homes shown in the St. Louis Post-Dispatch in the early 1930s, was L. J. Steffens.

St. Louis Sears Homes Designed By Sears Architect L. J. Steffens
Let's take a look at some of the St. Louis area homes that I found advertised in the St. Louis Post-Dispatch, throughout the early 1930s, as Sears-financed, Sears-built, and designed by Sears-employed architect L. J. Steffens.  Several of them are actually homes that I featured in my earlier blog post about Sears-financed homes in St. Louis that were not from the catalog.  I wondered, then, which of them were also designed by a Sears architect, and now I have the answer.

425 Parkwoods, Kirkwood, Missouri
Financed, designed, and built by Sears, with $12,500 of financing over two mortgages, built in 1932 for Mr. & Mrs. Dallas M. Smith.
Architect: L. J. Steffens
Sears Catalog Model that is similar: Kenfield
One of the things that we have noticed about homes designed by Steffens, for Sears customers, is that they often look like enlarged and customized versions of smaller houses offered in the catalog. The Dallas Smith house, above, has many similarities to the Sears Kenfield: 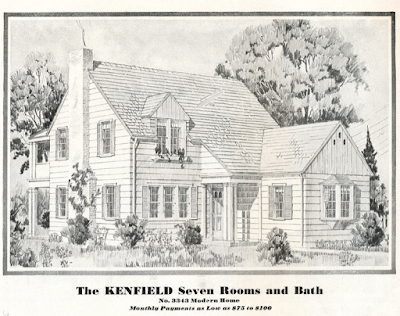 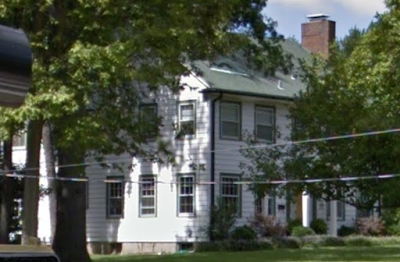 This was probably my most surprising, and most rewarding find.  I had written about this house in a blog post about a Sears Lebanon in Ferguson, Missouri.  A good way into the blog, I wrote about the fact that this house had been previously identified, by Rosemary Thornton, as a Sears Lexington. I , and other researchers, were completely puzzled as to why she would be sure that this was a Lexington, when it is 8 feet deeper, two feet wider, had much bigger windows in the front, had many more windows than it should on each side (in a much different configuration than it should) and had eyebrow dormers (which not a single Sears catalog home has).  At best, we thought it might be a customized home based loosely on the Lexington, but Rose hadn't put it forth with any explanation like that.

Then, there it was, on the pages of the 1934 St. Louis Post-Dispatch! And, not only is it, as we thought, not a true Lexington at all, but a customized home designed by L. J. Steffens, based somewhat on the front elevation look of a Lexington, but... it was the house that I had a mortgage for, for Mathilda B. Winter.  In that previous blog post, I explained that I had finally linked the Winters to a house at 1000 N. Elizabeth (thanks to a 1936 St. Louis County directory), but that there was no longer any house at that address... the address does not exist.  But, the Post-Dispatch photo's caption gave this house the address of 1000 N. Elizabeth. It now sits at 933 N. Elizabeth.

This home is not authenticated as a Sears home, because Sears was not mentioned in the newspaper as being the supplier of the financing or design, it only mentions L. J. Steffens as architect.  However, it is clearly a take on the Sears Lynnhaven (or Belmont, as the brick version is called). The Alta Dena Court home differs in that the Lynnhaven is never shown with half-timber accents, and the Lynnhaven does not have the attached garage area.  This home is also 5 feet wider than a standard Lynnhaven, and 3 feet deeper (see floor plan comparison, below).  So, either L. J. Steffens designed this for the Rileys in his capacity as a Sears-employed architect, or... he just boldly used the Sears Lynnhaven design as the basis for the design of the Riley's home, without Sears' knowledge or permission, after he had left the employ of Sears (I don't know when that was). 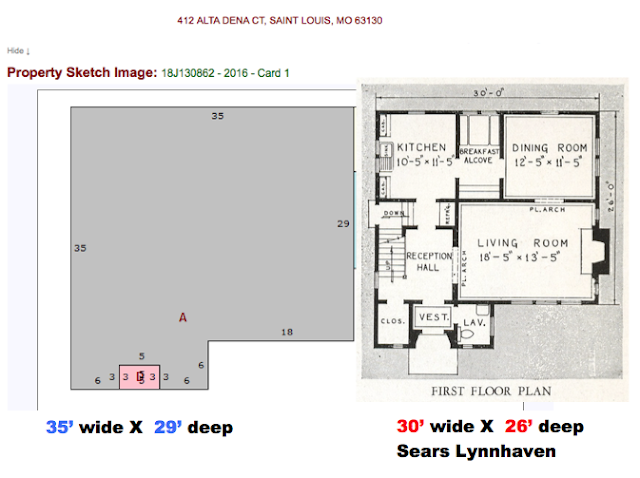 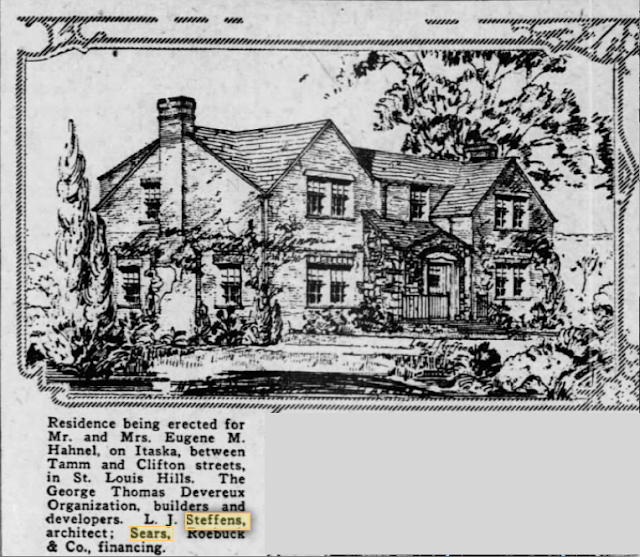 This house doesn't resemble any of the catalog homes that Sears offered.

The Story Of A Faux Elmhurst
I recently learned of another St. Louis area Elmhurst, thanks to a real estate listing that was brought to my attention, so I went by and snapped a few photos of the exterior: 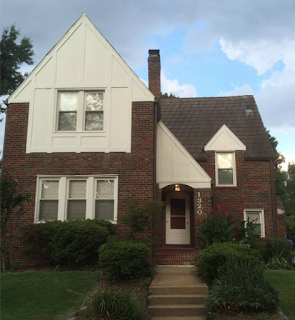 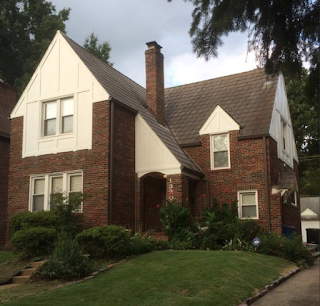 EDIT: March 27, 2017
The Elmhurst above has had a little bit of a facelift, including exterior paint, and fresh, neutral paint inside: 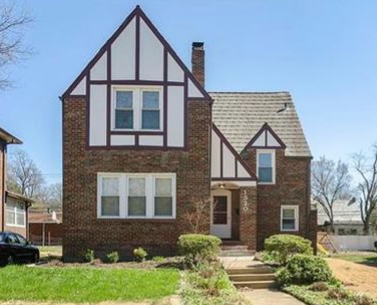 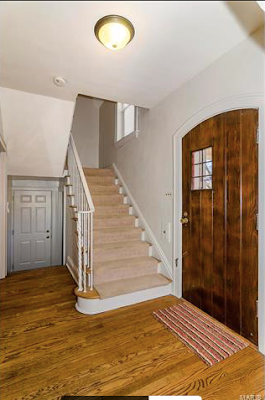 Now, on to the story of the faux Elmhurst:
Along with mention of that house that is most surely an Elmhurst (and a nice find), I understand that it was suggested that this 1926 house on another street in University City is thought to be a custom Elmhurst:
Here's another house in the neighborhood... look familiar?

These two houses are similar to each other, because they were both offered by the same company, in 1926... almost four years before the Elmhurst (designed by THE chief Sears architect in Chicago, David S. Betcone) was presented in catalogs:
And, here is the same company, right around the same time, offering up the house at 7219 Cornell:
And, just to reinforce that these houses were not just being built in 1929, here are two newspaper mentions of them being bought, one in 1926, and one in 1927: 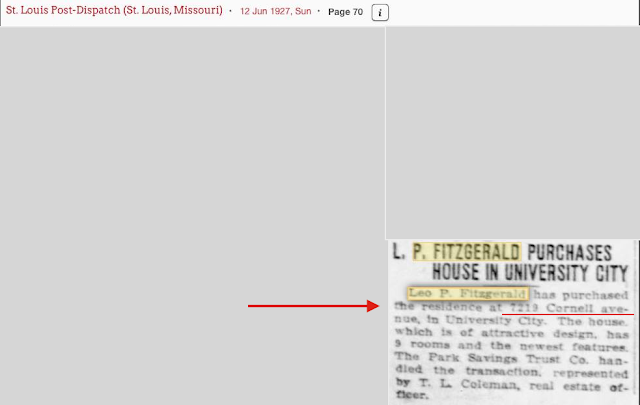 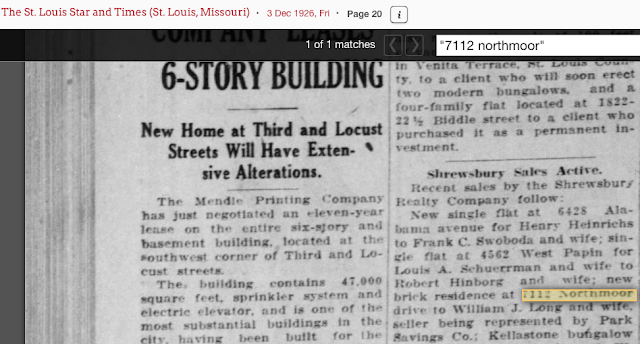 So, while that is all that we need to know to discount these two houses as custom versions of the Elmhurst, it's also important to note the following, just in general, about the concept of seeing a house that has major design element differences from a Sears model, and thinking it is just a different version of a catalog model from Sears:

Newspaper accounts state that, before 1930, Sears was only selling stock homes from the catalogs. That's not exactly true, as the 1918 and 1919 catalogs did offer to have the Sears architectural team draw up real plans from your dreams and wishes, but it does seem to apply to the 1920s.
The advertisements for selling homes that Sears would custom design for you, did not appear in any newspaper in St. Louis before 1930, nor was there any mention of this service in the 1920s catalogs. Of course, Sears had long provided the service of supplying building materials (only) for customers who brought their own plans to Sears (and that began before Sears even began offering house plans in 1908), but we do not consider that a Sears house, in any way... it's just building materials shipped from Sears. Still kind of cool, but not considered a Sears house.

Here is the 1925 Sears Modern Homes catalog. If you take a look through it, you'll see that there is no mention of Sears offering to design a custom house for you (however, we do know of instances where they may have allowed the customer to select different windows, or slightly enlarge a home, or make small tweaks like that-- that is much different than designing a house with a very different exterior, or whole additional wings, or extra rooms, or the bathroom in a different spot, etc.).  If you have access to a 1921, 1923, 1926, 1927, 1928 or 1929 catalog, look through it... you'll see that nowhere, do they mention that they will work with you to design a custom house for you. That all comes back again--with gusto-- in the 1930 catalog. But, you wouldn't expect to see a middle-class 1920s house that is a custom design through a Sears architect.

I am not the first to point out that 1930 was the real start of pushing the custom homes concept:

We researchers try to avoid jumping to conclusions about houses that maybe share some characteristics of a Sears model. We are always pointing out to people that all of the houses of this era, by all of the companies, shared very similar design features. Most of us would never make the statement that a house is probably a custom Sears model, without concrete evidence documenting that the house was designed by a Sears employee.  We would never say that our "gut" tells us that it is one... or use some phrase like, "trust me, I'm sure it is" when all we have to go on, is similar design elements.  If someone tells you that about a house, without a shred of evidence... well... what do you think?
Posted by SearsHouseSeeker at Sunday, September 11, 2016