In early January (2016), fellow researcher Karen DeJeet came across this beautiful house in the Pittsburgh area.  We haven't been able to authenticate it, but it sure looks like a Sears Windsor, with a very nicely enclosed front porch area.

The Windsor was offered from 1922 through 1933, according to Houses By Mail, though, in 1918, an almost exactly-the-same model, The Carlin, was built on several lots in Carlinville, Illinois.  Dale Haynes, a resident of Carlinville, who lives in a Roseberry, I believe, can explain the differences -- but, I can't!

Karen has been finding us some real gems this year. We all just loved this Windsor!
Another Windsor, this time in Cincinnati, Ohio (Disneyland for Sears Researchers)
A month or so ago, I, along with friends and mentors in all things Sears Homes related, Cindy Catanzaro, and Andrew Mutch, began checking out the mortgage books for Cincinnati, Ohio... going page by page in every volume, looking for the names of Sears trustees, to help us find the names of the owners.  One of the listings that I found, in series 7, volume 54, was for a man named Otway Yeazell, and his wife, Matilda. As usual, I was armed only with a lot number and a subdivision name, so I got busy searching for them using Ancestry.com.  Sure enough, there they were, at a house on Barvac Avenue... and, their house looks, also, to be a Sears Windsor.  This one has only the left portion of the front porch, closed in. 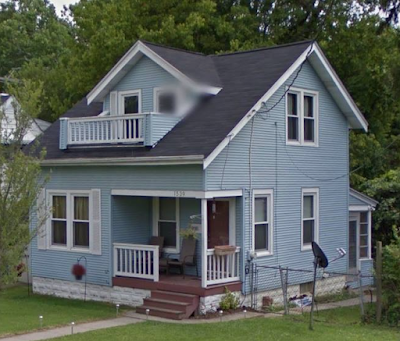 The funny thing was, that Andrew had already found a mortgage listing for the Yeazells -- I had found both the 1930 mortgage listing, with Sears trustee E. Harrison Powell, and then also the 1935 mortgage release. Andrew, however, had found the Yeazells somehow through the newspaper, and had even posted a picture of the house, back in November, I believe.   Then, after both of us posted the same house, we also realized that Otway Yeazell  was one of the names in a several-column Cincinnati newspaper article that Cindy had found, naming quite a few men who had just signed to have Sears homes built:

Andrew has found a cute Windsor in Yonkers, New York, with a mortgage, and has found numerous others in Michigan, Cincinnati, D.C. and Maryland... I'll let him tell you about those along the way in the stories on his blog, Kit House Hunters.

A Windsor in Bethel, Connecticut
Another of our fellow researchers, is young Nigel T., who is a whiz at buzzing around towns on Google maps, and finding houses (like the three Arlingtons I wrote about in January)..  Armed with the list of names submitted to Sears Archives (no addresses given, just names of models folks think that they may own), Nigel has found us quite a few of those homes, which we are delighted to be able to add to our growing National Database of Sears Houses.  Nigel found a Sears Windsor, in Bethel, Connecticut:

The Sears Windsor also resembles a larger model, the Sears Westly. You can read about, and see photos of, several Westly models at this post of Sears Houses in Ohio.  If you have a Sears Windsor or Westly (or any Sears or kit house, of course!), please feel free to leave a comment, or contact me via my contact form.  Thanks for visiting :)
Posted by SearsHouseSeeker at Sunday, February 21, 2016