Sears homes in St. Louis are not as plentiful as you might think.

Because of all of this, I hadn't spent much time looking through the streets of the city, for kit homes. I have focused on areas of the nearby suburbs of St. Louis County.  But, this summer, around June 19 (2015), I decided to move my Sears mortgage-deed searching to the big, beautiful building that is our city's City Hall (for images from that visit to city hall, read my most recent post).  I netted about 18 names and locations related to mortgages from Sears: one signed by 1920s Sears trustee, Walker O. Lewis, in 1925, for a mortgage of $1, 800.  I put off looking for the house for that one, figuring, at such a low price, it was probably a mortgage for a garage, or some little fluff of a standard-bilt house that had fallen down by now.


According to tax records, our Olivia on Oleatha, is only about 664 square feet. Yikes. That's tiny. The floor plan shows 2 bedrooms on the right side of the house, and a living room on the left, with the kitchen behind it. That's about it, folks! A bathroom, and a short hall, and a few closets finish it off. 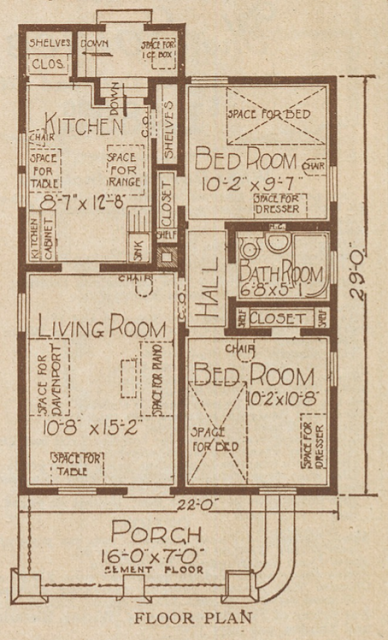 Who lived here?
Well, you would think that the easy answer would be: E. W. Boehme and his wife, the folks who signed the mortgage with Walker O. Lewis.

However, digging and searching on Ancestry.com, did not net me anyone by that name, at this address, either through the 1930 census, or via St. Louis City directories from 1925 on. I found an Erwin Boehme, in St. Louis, who worked as a supervisor at Western Union, and his wife, Esther Boehme, who worked for Western Union, too (a company dear to my heart, because it's where my dad worked from age 16, through until his retirement many decades later.), but they weren't shown at this address. I think that I only found them through about 1920 at any address, anyway, so they're probably there somewhere, in some directory, but I didn't find them.  I'm going to a Genealogy workshop at the Missouri History Museum Library in a few weeks -- maybe I'll work on tracking them down to connect them to living in this house.

But, let me tell you about who lived here as early as 1929: Edward Hofer, and his wife Myra.  They seem to have been lovebirds... they married at ages 20 (he) and 15 (she)! Holy cow, that's young. Edward's parents, Fredrick and Bertha, had come to the United States from Germany, and began their lives in the United States, living in Syracuse, New York.  Edward and his siblings were born in New York.

Interestingly, about Edward and Myra Hofer, though they married quite young (as shown on the 1930 census, in the column "age at first marriage"), they don't show children in their home with them until the 1940 census... and then, it's a 7 year old and a 1 year old.  It seems unusual to marry at age 15, and not have children until about age 27 (especially in that era) which seems to be the case for Myra.
Edward and Myra Hofer may well have lived in their little Sears Olivia until their deaths, he in 1977, and she in 1981, because their last residence is shown as still being at that zip code (63139).

The Origin of the Street Name, Oleatha
Today, in a group about Saint Louis history, a gentleman named Rick Murray told me that this street, Oleatha, was named after his great grandmother!  Her name was Oleatha Didawick Rathell.  Her husband, Mr. Murray's great grandfather, was a real-estate developer named Samuel T. Rathell.  Another of the streets in the neighborhood is Mardel, named by Mr. Rathell after a well-known street in another area of Saint Louis, Delmar. The Rathells lived on Cabanne, just north of there.  The neighborhood that Oleatha sits in is called Lindenwood Park -- named for the fact that Oleatha had attended Lindenwood College, in nearby St. Charles.