This is the second of three homes in this pretty neighborhood, that I found 1932 mortgage deeds for, signed by Sears trustee E. Harrison Powell.  The first, was a 1932 Sears Clifton (read about it here), next door, and the third is a 1932 Randolph, on another street.

I actually found these houses first, just by driving by.  Because the house on the left is a little Cape Cod, and there are just so many companies that made Cape Cods, and they all look so similar, I wouldn't have realized that it was a Sears model.  It was the big cat slide front entry gable on the house on the right (the Clifton), that caught my attention.  I took note of the addresses, and went home and quickly opened up Google maps, my copy of Houses By Mail, the St. Louis County Department of Revenue real estate website, and my stash of Sears catalogs.  In no time, I had found that I had come across a Sears Stanford, a model that I had never read about before. 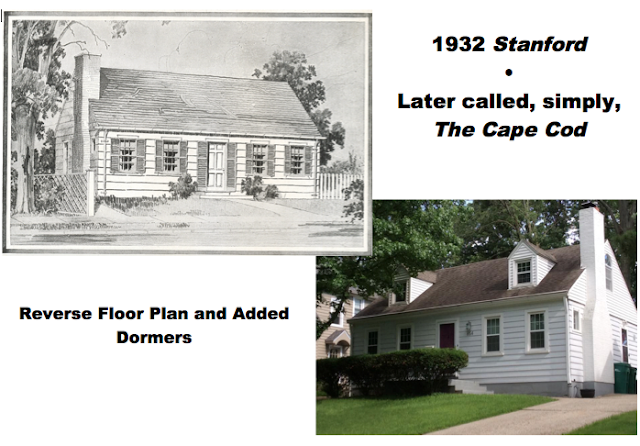 The Stanford came in two floor plans: a smaller four-room version (3354-A), and a larger, five-room version, with an added dining room (3354-B), and a bit more square footage. 654 Oakland Avenue is model B. The inside layout of the rooms is very different between the two models, with both bedrooms in the back of the house, in model A, and the kitchen in front, next to the living room, whereas model B has both bedrooms on one side of the house (front to back), with the kitchen moved to the back corner of the house, with a dining room next to it. Both models have the living room in the same spot, in the front of the house.

EDIT 2020: Here, in this image from a 2020 real estate listing, you can see the back of the house, which shows the extension for that back bedroom:
Upstairs Option
Though the option of finishing off the half-story under the eaves, is not actually shown in the catalog listing for the Stanford, the 1940 Colebrook model (a similar cape cod) shows what that might look like, with the added dormers, and the stairway opening. If you compare this to what the actual finished upstairs looks like at 654 Oakland Avenue, you can see that it must look much like this.
The Cape Cod Model
Here is how it is shown in the 1940 catalog, listed as the Cape Cod. The 3-D floor plan images help you visualize the layout better, I think. Houses By Mail says that the Cape Cod model is the exact same thing as the Stanford --and, it is... in 1938. But, in 1940, it is not exactly the same floor plan for one of the layout options.  The B floor plan is the same, but the smaller 4-room plan is a good bit different, with the bedrooms no longer side by side in the back of the house, but rather moved to the side of the house, front to back (as they are in the B floor plan). That moves the kitchen from the front right of the house, back to the back left corner, more like it is in floor plan B. The whole layout is more like floor plan B, really. In fact, it's not even exactly the same size as the Stanford's Plan A (No. 3354-A), as this floor plan is 1 foot wider and 6 inches deeper, at 31 X 22.6. So, this smaller version is not called "Plan A", it is "Plan X" (No. 13354X). 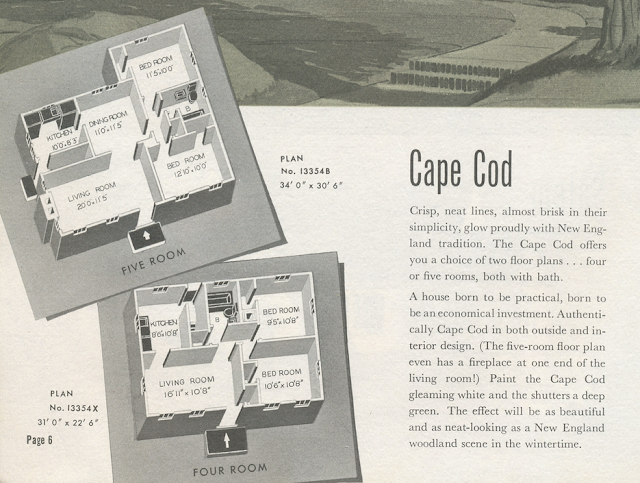 Realtor Photos
The Stanford at 654 Oakland Avenue was recently for sale, and I was able to get a few interior shots, thanks to this listing on Zillow (EDIT: In 2020, the house was up for sale again, and that Zillow link takes you to the new photos).  Knowing the floor plan, you can see how the rooms fit into the layout shown in the catalog, though, since it's the reverse floor plan, everything needs to be flipped, like the page of a book. (Click any image to enlarge.)
EDIT: Here are a few views of the kitchen, now, as it looks in June of 2020: 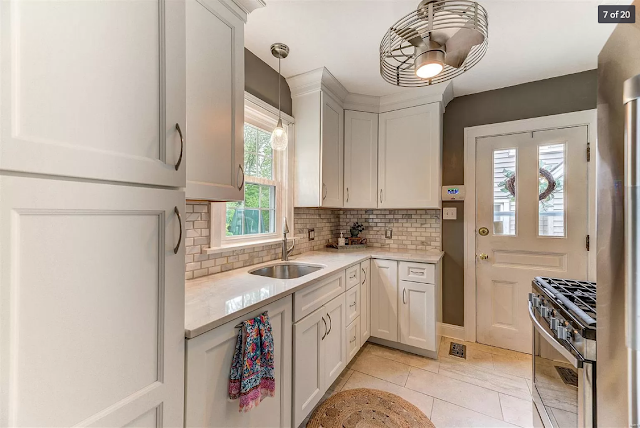 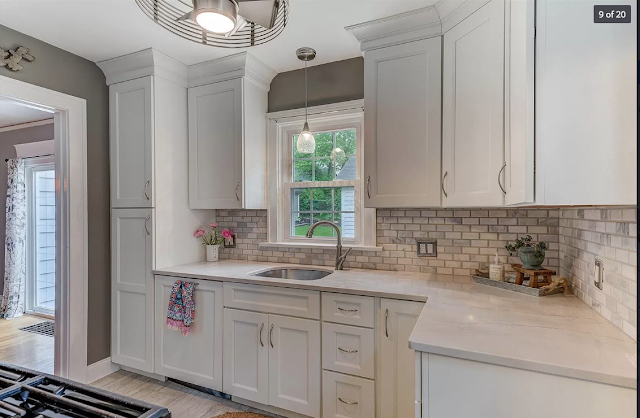 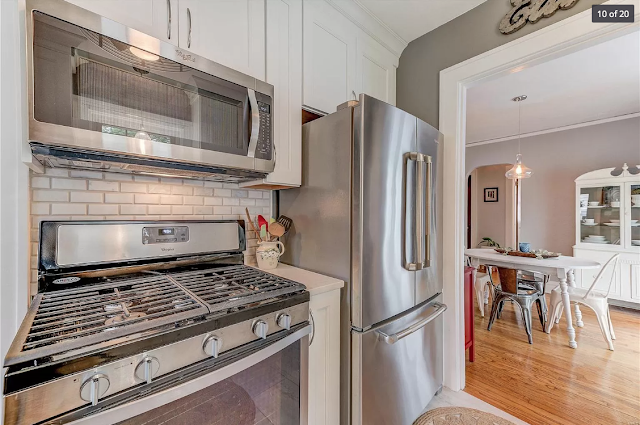 EDIT 2020: You can just barely make it out, but that is Sears La Tosca door handle hardware on the door to the upstairs. 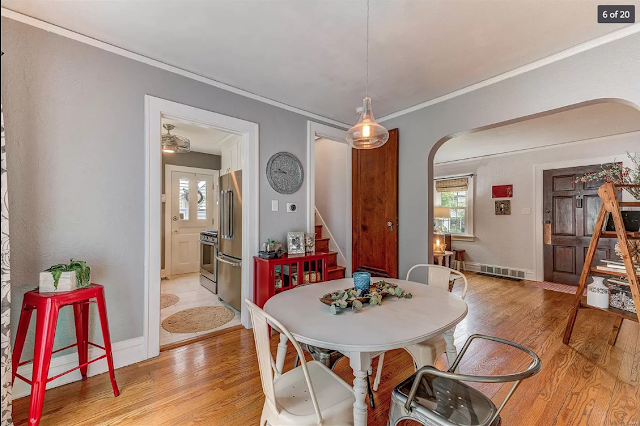 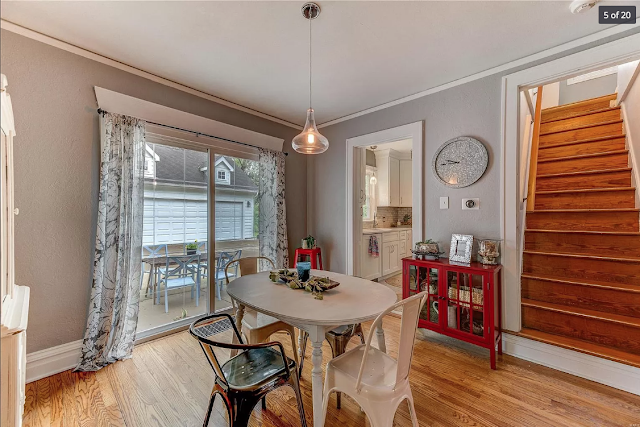 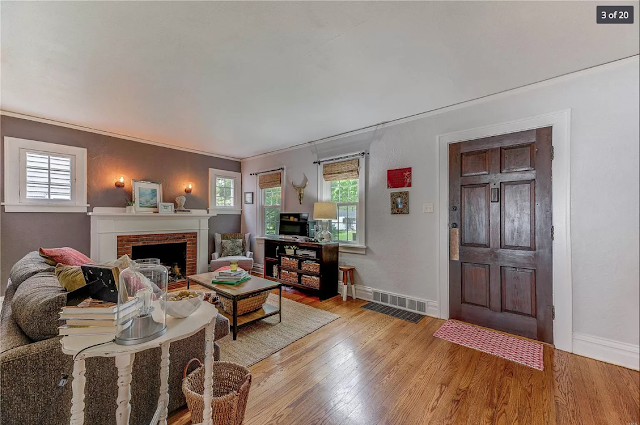 And, here, again, in the 2020 real estate photos, you can see what the whole space looks like up here, and how much better the quality photos display the size of this space: 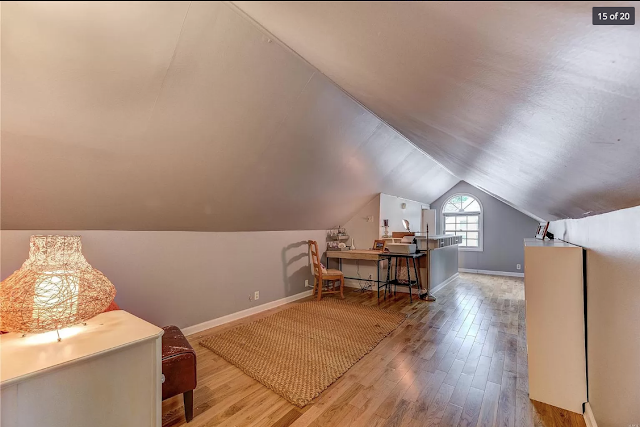 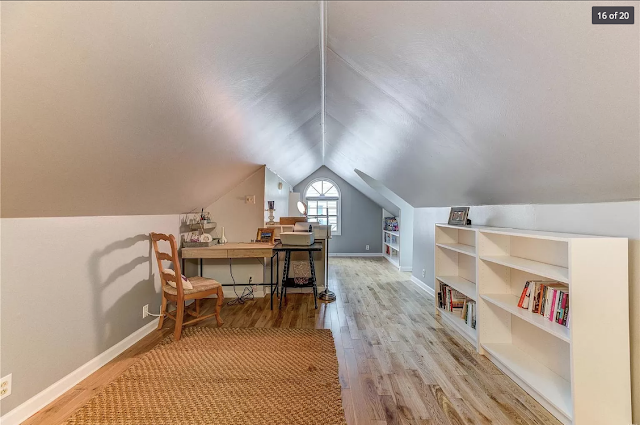 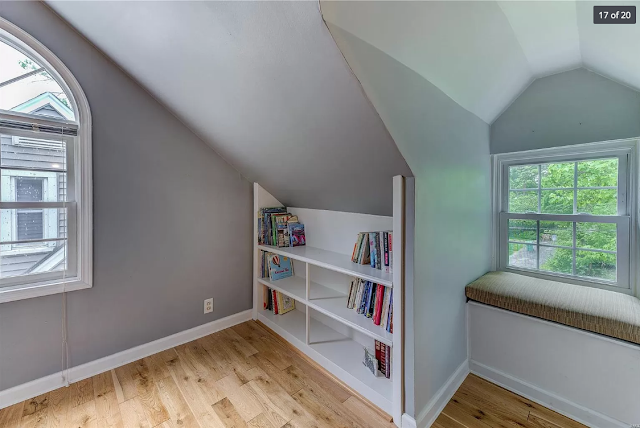 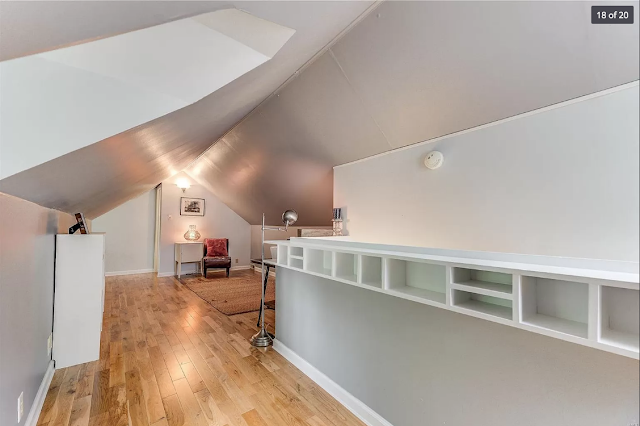 Who Lived Here?
As I was doing mortgage deed research, I came across three 1932 mortgages in Glendale park, which I discovered was the name of this neighborhood.  One mortgage was for block 5, lot part 2, east part, and the mortgage had been taken out by Liberty LaMoyne, a maintenance man (according to the 1940 census) and his wife, Myrtle.  I recognized that this was the lot next to the mortgage for Howard Hankins (owner of the Clifton), and that the third Sears mortgage was for a plot just behind these two-- which I came to realize was for the Randolph I haven't yet blogged about. Knowing that I had three plots right by each other, in Glendale Park, where I had spotted Sears houses, I suspected these mortgages were for those three houses.  A bit of research on Ancestry.com, proved to match up those names to the addresses that corresponded to these legal descriptions, and I was set! Three authenticated Sears houses in Glendale Park subdivision of Webster Groves, Missouri.

It's nice to know that Liberty LaMoyne, a maintenance man with only three years of high school, was able to provide his wife, and little son, Arlene (yup! That name is listed as for a son!), with a neat, solid, well-built house in this lovely, tree-lined neighborhood of Webster Groves. This is probably the most modest home in the neighborhood, but it's well kept-up, and desirable for a small family. It's not too far from some railroad tracks, and now, it's got a bit of highway noise not far away, but it's still a very nice neighborhood, where homes go for a good bit more than a maintenance man might be able to afford in 2015.  Arlene would have gotten a good education in the Webster Groves school district, too.  I have no idea how long the LaMoyne family lived in their little Stanford on Oakland Avenue, but I'm sure glad I found out that they did.