This is the third of three Sears homes that I ran across in Glendale Park, a little neighborhood in Webster Groves, Missouri, when I turned right on a street I normally turn left on.  I first blogged about the Clifton, and then the Stanford, both on Oakland Avenue, which is the street behind W. Frisco. In fact, those two lots are right behind this one. I have, since then, also found mortgage deeds for each of them, signed in 1932 by Sears trustee E. Harrison Powell, which makes all three of them authenticated Sears homes.

The Randolph, which was only offered for a year or two* (Houses By Mail, p. 155), is the brick (veneer) and stucco version of The Willard.  The Willard was offered earlier (1928), and continued on in the Sears catalog until 1938 or possibly 1939. (*According to Lara, of Sears Homes of Chicagoland, the Randolph was actually offered as early as 1929, as shown with a 1929 catalog image in this blog post from June of 2015).

Who Lived at 651 W. Frisco?
Well, that depends on the year... obviously.  Usually, when we find a mortgage for a Sears house, the folks who are listed on that mortgage can be traced as living there for a good long while after the construction of the house.  If you went to all of the trouble to buy a kit home from Sears, with every bit of lumber and framing and all of the nuts and screws and bolts and light fixtures and doors and shutters and shingles shipped to you in one big shipment, wouldn't you probably be intending to hang around and live there for many years to come? That's what I usually find. If someone buys a Sears house in 1929 or 1930 or 1932, I see them in that same house in the 1940 census. Usually.

But, in this case, this home was built in 1932 by Albert E. Lazier, who first lived in nearby Kirkwood, Missouri, from the time he came to the U.S. from Canada in 1889.  In 1890, he married native Missourian Frances Doerr, and together they had five children.  By 1930, the Lazier family was living at 733 Berry Road, in Oakland, Missouri (a tiny municipality just between Kirkwood and Webster Groves) -- a residence which is no longer standing.  Albert worked as a carpenter.

However, it's hard to say whether or not Albert and Frances ever lived in their new Randolph at 651 W. Frisco, as Frances passed away in November of 1933, and Albert is not listed at this address in the 1940 census -- he is listed as living with his son Leroy, in nearby Kirkwood.  No city directory listing exists showing where Albert lived between 1930 and 1940, either.


But, what does exist, is a 1940 census listing that shows that a young couple -- Adolphus and Idella Harris-- lived in the Randolph in Webster Groves, with their little baby girl, Gloria Jean. Adolphus worked as a painter and decorator, and he and Idella can't have lived in the house for very long at that point -- they were only 21 and 22 at the time of the 1940 census.  Interestingly, Adolphus had grown up right down the street from the Laziers, on S. Berry Road in Oakland, he at 633, and they at 733.  I wonder if Albert -- who was already close to 70 when the Randolph was built-- chose not to stay there for long after Frances passed away, and sold it to Adolphus around the time that he married Idella.  They may well have been families who knew each other, working in similar trades, and living only houses away from each other.  In any case, Albert Lazier ended his days living with his son, and passed away in 1942, at age 78.

More About the Willard and the Randolph
I have been working with a group of dedicated, hard-working researchers to help find, authenticate, and add homes to The National Database of Sears Homes -- a project begun by Lara Solonickne of the blog Sears Homes of Chicagoland, which I mention here often (in fact, here is a post that Lara did in June of 2015, showing another Randolph, and a Willard).   The database is a thorough, well-researched list of Sears homes in the U. S., listing homes by model name (or number) and address, while also noting whether or not the home has been authenticated, how it has been authenticated, and often including a link to images or further information about many of the homes. Thanks to our list, I was able to look for a few more examples of probable and authenticated Randolphs and Willards, and even found a real estate listing for one. I love to see interiors of these homes, so I'll include a number of them as I wrap up this post.

None of the Willards shown here are authenticated, but they are all highly probable as Sears homes. Click on any of the images to enlarge. The Cincinnati Willards below were originally identified by Beatrice Lask, who did a Masters Thesis on Sears Houses in Cincinnati. Thanks to Cindy Catanzaro and Andrew Mutch for that information.  To read a summary of Bea's thesis, click here. To view the entire document, find the link to the right of this post.


The probable Willard on Alpine Drive in Kentucky, was up for sale in February of 2015, so I was able to find a listing on Trulia with a number of good interior photos. The layout you see in these photos will be what would be found inside the Lazier-Harris Randolph in Webster Groves. (Click on any image to enlarge it.) 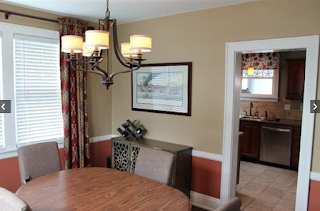 EDIT, May 8, 2016: Thanks to photos taken personally by fellow researcher and blogger, Cindy Catanzaro, we have a couple of great photos of this Fort Mitchell, Kentucky Willard. See her blog posts about her  finds there, right here, and right here.

Other House Models With the A-shaped "catslide" Entry Gable
The "swoopy" (as I like to call it) entry gable that we see for the Randolph/Willard model, is seen on many Sears models from the late 1920s and through the 1930s.  It was a common design feature in homes from many companies, including other kit-home companies (like Gordon-Van Tine and Lewis and Sterling), but also with most all plan-book patterns of that era.  To see more about what other features to look for, and see images of a few different models with this feature, see my recent blog post, here, about the Sears Clifton located behind the Randolph at 651 W. Frisco.